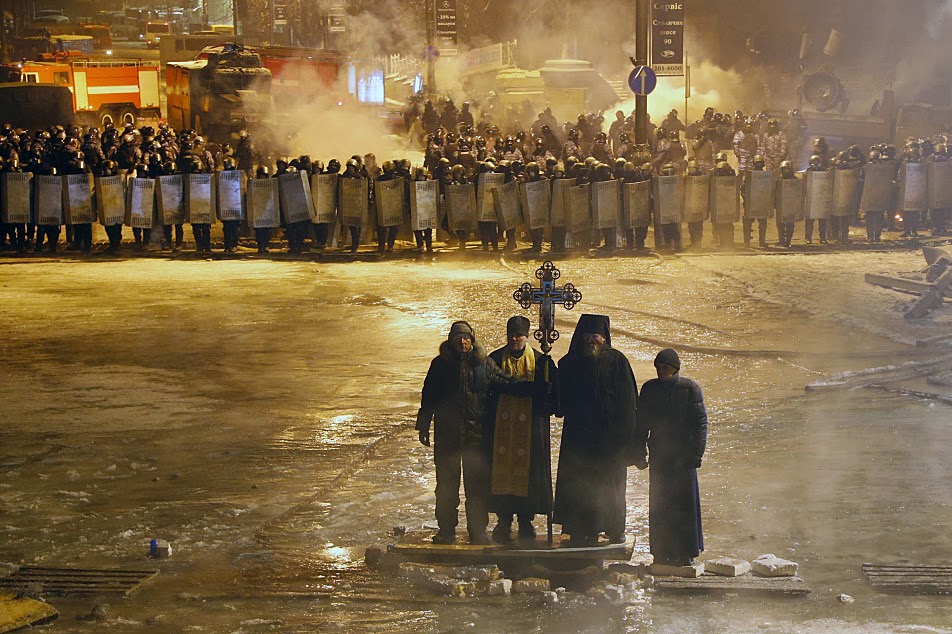 The crisis in Ukraine has laid bare the fault lines in Ukraine for all the world to see. But these fault lines are not only political and ethnic or linguistic but also religious. If war is to be averted, which is the prayer of nearly everyone, then some of the fault lines must be bridged over. This includes the religious ones.

It is remarkable that after the ouster of President Yanukovich and the seizure of Crimea by President Putin, ostensibly to protect Russian citizens living there, that many Ukrainians of diverse political stripes are now united as they have not been before. They protested together for months in Independence Square, but they disagreed on many matters regarding the future of Ukraine. Now, while threatened by Russia, they are one, at least for the moment. Depending on what Russia does, however, that moment may not last very long.

First a brief survey of the major churches in Ukraine, and the history that led up to the current situation. I will refrain from calling them denominations,since both the Catholic and Orthodox churches regard themselves as predating the various schisms that have led to all the denominations that exist today. Similarly, both reject the idea of branches, since they regard themselves as the trunk from which other churches have sprung through schism. In fact, other churches are often seen not fully churches but are viewed as sects.

The beginnings of Christianity in what is today Ukraine is attributed to St. Andrew, but there is no proof for this. There is a tradition, however, that Pope Clement I was exiled to Crimea in 102. A representative from the northern Black Sea region may have been present at both Nicaea I in 325 and Constantinople I in 381.

Christianity had established itself firmly by 900 when a church was built in Kyiv. After the baptism of Vladimir the Great in 988, Kyivan Rus' became a Christian state. This event marked the birth of Russia and its long association with Eastern Orthodoxy. With the breakup of Kyivan Rus' the long and bitter rivalry between Catholics and Orthodox was accelerated and has contributed to the current situation in Ukraine. However, this history is too convoluted to describe fully now, and thus I will highlight only a few features.

The Russian Revolution and formation of the Soviet Union later also contributed to a situation where there are three major Orthodox churches in Ukraine, three Catholic churches, and a large number of Protestant churches, largely Baptist and Pentecostal, but these remain a small minority. Decades of state-endorsed atheism almost terminated some churches;:many churches were closed and numerous clergy executed. 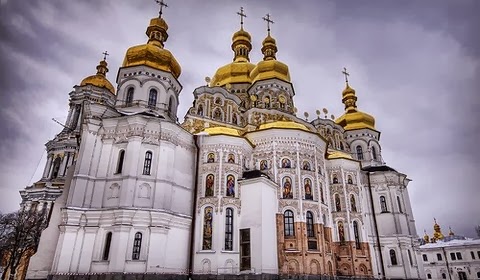 Pechersk Lavra, seat of UOC(MP)
\
The Ukrainian Orthodox Church (Moscow Patriarchate), abbreviated UOC(MP), claims to be the largest group. It is found throughout Ukraine, but is concentrated especially in Russian-speaking areas. It operates as an autonomous church under the Moscow Patriarchate and regards other Ukrainian Orthodox churches as schismatic. It considers itself as the true descendant of the Orthodox Church of Kyiv and Rus' and thus traces itself back to the time that Vladimir was baptized in 988. It is the only Ukrainian church that has full canonical status in Eastern Orthodoxy.

The Ukrainian Orthodox Church (Kyiv Patriarchate), abbreviated UOC(KP), is the result of a schism from the UOC(MP) in 1992, led by Metropolitan Filaret (now Patriarch of Kyiv), who led a group of bishops out of the UOC(MP), and wanted to form a Ukrainian autocephalous church. Filaret, who is very active in both church and state politics, wants to form a single Ukrainian national church. The UOC(KP) is not canonically recognized.

To make an already complex situation even worse, the Ukainian Autocephalous Orthodox Church (UAOC) had been established in 1921 after Ukraine gained temporary independence. The ordination of the bishops for this new church was highly irregular. It has undergone several "resurrections," most recently in 1990 when the church received state recognition and Ukraine regained its independence the next year. It is the smallest Orthodox group and was briefly united with the UOC(KP), but now finds itself closer to the UOC(MP).

Where further unity discussion will go is uncertain. There are not theological barriers to union of the Orthodox churches, since they share the same theology, which makes it possible for them to be in communion with each other. The differences between Orthodox churches are ethnic and historical or political, and reveal themselves in terms of jurisdiction.

To muddy the waters further, many Orthodox people are unaware of the jurisdiction to which the church they attend belongs. That often does not seem to matter to them. The theology is the same and the liturgy is largely the same, except in some small details.

One barrier to union of the Orthodox churches is certainly the mutual accusations of collaboration with the Communists during the Soviet era. In addition, there is today fierce competition for limited resources, whether human, financial, or buildings.

The Catholic churches date back many centuries when Ukraine was under Lithuanian and Polish political control and cultural influence. Under the Union of Brest in 1596 parts of the Ukrainian church came under the jurisdiction of the Bishop of Rome. Today it is known as the Ukrainian Greek Catholic Church, which is sometimes labelled "Uniate," but they strenuously object to this term. It is the third largest church in Ukraine.

There is also a Ukrainian Catholic Church (UCC), which uses Latin-rites, but it is considerably smaller that some of the other churches, although it is slightly larger that the UAOC. A large number of assorted small Protestant and Independent churches complete the list of Ukrainian churches.

Aside from the huge barrier that ethnicity and language have created in Ukraine, the legacy of collaboration with the Communists cannot be easily overcome. In Russia, Baptists and Pentecostals both did extensive house cleaning by removing the most prominent collaborators and KGB-agents. Unfortunately the Russian Orthodox Church never di, nor is it likely to do so as long as a former-KGB agent is President of Russia.

Such house cleaning has not happened in Ukraine to the best of my knowledge. It is urgently needed, but highly unlikely. Lent would be an appropriate time for such confessions, but the wounds run too deep for forgiveness to be accepted much less offered.

Yet the current crisis in Ukraine offers a unique opportunity for some of the churches to unite. Especially if largely Russian-speaking Crimea becomes part of Russia again, as seems likely now. Some other parts of Ukraine may also come closer to Russia or even be absorbed by their eastern neighbor, but that is more difficult, As a result, Ukraine may yet become a stronger, more united country. 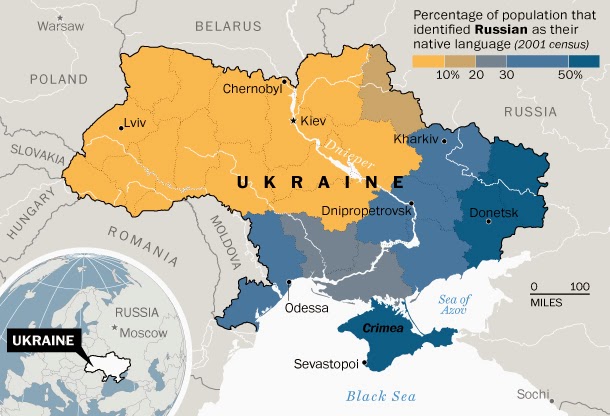 Russia has driven the political opposition in Ukraine closer together. That is necessary if Ukraine is ever to have a strong, effective government that is widely accepted: one that has the support not only of Ukrainians but also of the international community which will have to provide much-needed economic support.

One important step toward achieving that unity is if the churches, especially the Orthodox, would signal their own unification. The protesters in Independence Square did not represent any churches publicly, but the clergy who were also present could not hide their commitment since they wore their robes.

Whether the churches can play a leading role in promoting greater Ukrainian unity or whether church unity will follow is anybody's guess. At the end of the day, both church and state may remain as divided as they were before. But that would be a pity. The loss of life in Kyiv and other cities would have been in vain.

Before his death on the cross, Jesus prayed for the unity of all believers. I am sure that his prayer was also intended for the divided churches in Ukraine.

Let us pray for that unity as well. Let us also pray that the crisis in Ukraine may end peacefully. 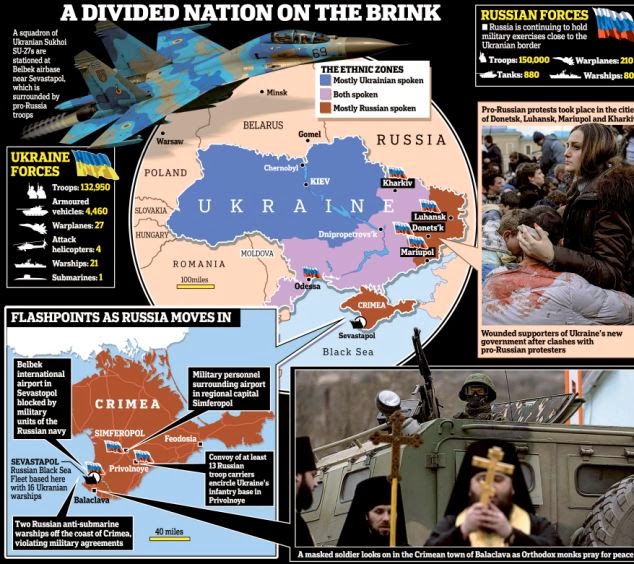