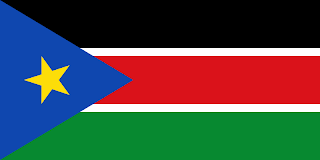 On July 9, 2011, the newest nation in the world was born: South Sudan. Today it was officially admitted as the 193rd member of the United Nations. It gained its independence by seceding from Sudan, after a referendum held in January in which about 99% of the votes were cast in favor. The capital city is Juba.

Map of South Sudan
The road to independence was a long one, including two wars in which more than 2.5 million people died and 5 million were internally displaced. The population of South Sudan is estimated to be between 8 and 14 million, thus these losses are significant.
The leader of the independence movement until his death in a helicopter crash in 2005 was John Garang, a member of the largest tribe, the Dinka. Other large tribes include the Nuer, Shilluk, and Azande. Tribalism is one of the major problems facing this new nation. The first president, Salva Kir Mayardit, is a Dinka. The vice-president is a Nuer, but the Dinkas have already sidelined him.
There are many more problems. There is virtually no infrastructure. As the information minister, Barnaba Marial, explains, "We never had roads. We are starting from below zero." Transportation costs are enormous: to ship a container from a port in neighboring Kenya to Juba costs $10,000. Moreover, rains turn the country into a quagmire for several months every year.
Since 85% of the population is illiterate, the government is hard pressed to find capable people to staff the offices of the new state. Businesses also find it difficult to find suitable employees. But this has not kept away cohorts of foreigners who are intent on providing services. This influx includes South Sudanese who are coming home after decades of civil war.
The city of Juba has tripled in size since a peace deal was signed in 2005. Relative to local income, Juba is the second most expensive cities in the world in which to live. South Sudan is ranked as 159th out of 183 countries in terms of difficulty in starting a business.
Oil is the mainstay of the South Sudanese economy. The major oil fields are found in South Sudan, but for the export of the oil it is dependent on Sudan, which has the oil pipelines. Some of these fields are located in border areas that are still in dispute with Sudan. There are plans, however, to build a pipeline through Kenya.
Religion was one of the major factors that led to the split. Sudan was about 60% Muslim before the secession, with more than 25% Christian and 11% adherents of ethnic religions. Now nearly all the Christians are concentrated in South Sudan.
Catholics and Anglicans form the largest Christian groups in South Sudan, although there are also sizable numbers of Presbyterians and other denominations. Sudan has a predominantly Sunni Muslim population, primarily among Sudanese Arabs. But there are also many Sufis.
I have followed the saga of the South Sudanese for many years, when I was introduced to Sudanese students studying in Moscow. These students were primarily Dinkas and studying at People's Friendship University. Many worshiped at St. Andrews Anglican Church in Moscow, which I also attended.
We became  good friends with these students, and they kept me abreast of what was happening in their homeland. This is one reason why the independence of South Sudan is so important to me.
The organization of which I was a part in Russia and Nigeria, Christian Studies International / the International Institute for Christian Studies, has been instrumental in trying to provide new professors for the University of Juba,  which was located in Khartoum for many years but is now moving back to Juba.
Please pray for this new country. It faces many challenges. Pray especially that peace may reign both internally, among the many tribes, as well as with Sudan, with which there are still many unresolved issues, including borders and the final division of assets and debts. War is the last thing that South Sudan needs.