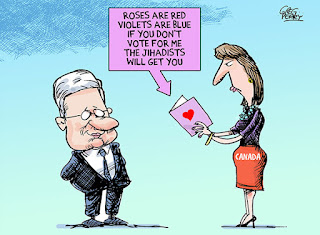 As anyone who has been following the interminable Canadian federal election knows, security is a word that has frequently been on the lips of Conservative leader Stephen Harper. It is a coded word, but one that appeals strongly to voters. After all, who in Canada is is not concerned about security?

Politicians anywhere can dismiss security concerns only at their own peril. Killings all over the world are easily ascribed to terrorists and thus used to justify such concerns. Since 9/11, many political leaders have played the security card in order to push through measures intended to provide greater security.

Stricter security procedures at airports are a direct consequence of 9/11. Whether these procedures are worth the billions of dollars that have been spent  on them is information that is not publicly available, but they have served to convince the public that governments are doing something to protect them.

Security is an important part of the vocabulary of what is called  "dog-whistle" politics. This is often described pejoratively because of its deceptive and distasteful nature, especially when used in a racist way. Although this is not always intended, it is often used that way.

Dog-whistle politics employs coded language in which words mean one thing to the general population but are understood in a different way by a targeted subgroup. The analogy is that of a dog whistle, whose high-frequency whistle is heard by dogs but is inaudible to humans. 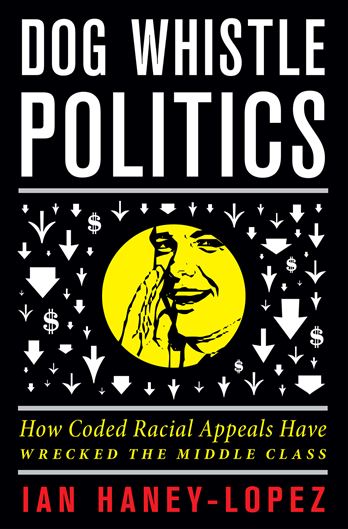 The political message -- which may be exclusionary, distasteful and even racist -- is not understood as such by those outside the target group of the electorate. But this message resonates and energizes the target group while it is misheard or misunderstood by others.


The term can be distinguished from "code words" that are used by specialists in some professions, Dog-whistling is specific to the political realm.

The term apparently originated in Australian politics in the mid-1990s and was frequently used to describe the political campaigning of John Howard who was accused of communicating messages appealing especially to anxious, and perhaps racist, white Australian voters

For example, the Howard government's tough stance on illegal immigration was popular with voters. However, his government was accused of using this issue to send additional but veiled messages to voters with racist leanings, while maintaining plausible deniability by avoiding overtly racist language.

Dog-whistle politics has also been used effectively in the UK and US. In the UK, Australian political strategist Lynton Crosby, who had managed Howard's four election campaigns in Australia, was enlisted by the Conservative Party as an advisor during the 2005 British general election. 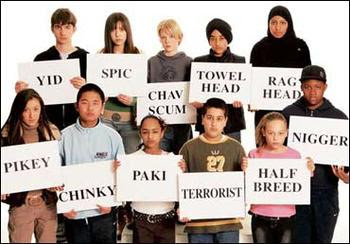 In the US, dog-whistle politics has been employed extensively by many presidents and political candidates, including Ronald Reagan and George W. Bush. Even Barack Obama and Hilary Clinton have also been accused of this.

In Canada, the same style of politics is being practiced, especially during election campaigns. While no party is entirely innocent of this practice, the Conservatives have upped the ante this time by hiring Lynton Crosby who is notorious for using this tactic. Is this, perhaps, a sign of desperation on the part of the Conservatives?

Security has been the Conservative mantra throughout this campaign. This is dog-whistle politics which plays on the fears of those who are most susceptible to this tactic. Everyone wants security, of course, but not everyone feels threatened in the way that the Conservatives use the term.

According to experts, security always involves trade-offs. We are willing to tolerate the hassle of airport security measures even though the threat of highjackings is extremely low. This is security theater, although most people are unaware of this.

Similarly, the threat of being attacked by terrorists is almost non-existent, the Conservatives has used this theat to justify such measures as the passage of the Anti-terrorism Act 2015, formerly known as the infamous Bill C-51 which the NDP, correctly, vows to repeal. 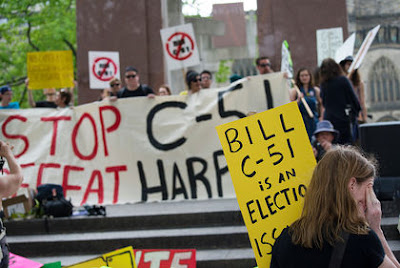 Two military men were killed last year by people who may have been Islamic State sympathizers, yet that does not make ISIS them terrorists. The government used these attacks to push through their new anti-terror legislation. Mental illness is, in my ipimion, a better explanation of the behavior of the killers.

I would also argue that these killings might not have happened if Canada had not become involved in the co-alition fighting ISIS, which many Muslims perceive as ant-Islamic. Domestic terrorism would not be as much of a threat if Canadians were not bombing ISIS strongholds.

The word "security" has become red meat for those who fall for the purported terrorist threat while many Canadians dismiss it a so much Conservative noise. Yet the other political parties cannot afford to ignore this word entirely lest they could be perceived a soft on terrorism.

A perverse logic operates among those for whom security is a major issue not only in this election but also in general. Terrorism is equated by them with Muslims. The Syrian refugees are mostly Muslim. Therefore, these refugees are potential terrorists and must be subjected to a rigorous security check before they can be accepted for admission by Canada.

In response to the photos of Alan Kurdi and the urgent need to help Syrian refugees, the government has relented and promised to admit a few more of them, even foregoing the requirement for recognition as UNHCR-approved refugees. Yet this is too little too late.

Yet the government refuses to budge on the security issue: "Security screening will remain the top priority," according to Chris Alexander, the minister of citizenship and immigration. Stephen Harper keeps on emphazing the necessity of security during his campaign stops. 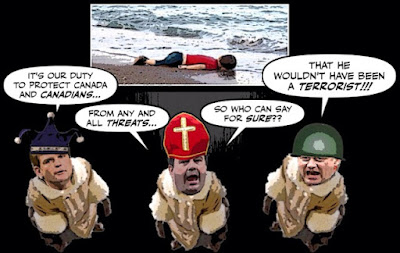 Security is the key dog-whistle political term of the Conservatives. They want to campaign on the issue of their management of the economy, even though heir track record on the economy is dubious. Yet they continue to insist that Canadians should stick with them rather than entrusting the economy into the hands of the Liberals or the NDP whom they characterize as spendthrifts. Security, however, is what keeps their base in line.

A poorly-concealed racism is part of the attraction of this term with its perverse anti-Muslim logic for those who are so inclined. The same logic applies to the unfortunate phrase that Harper used during the recent leaders' debate in Calgary, where he referred to "old stock" Canadians while defending the government’s cuts to refugee health care.

The leaders of the other parties, naturally, jumped on this comment, alleging that Harper is dividing Canadians by suggesting that citizens can be sorted into separate categories depending on how long they or their ancestors have lived in Canada.

"Old-stock" is similar to two phrases used in Quebec:  "pure laine," literally meaning pure wool, referring to those whose ancestry is exclusively French-Canadian; and similar term, "de souche," meaning "of the base of the tree, or root" and thus "old-stock." Both terms are racist, except in Quebec, where this type of racism is tolerated. These terms are another example of dog-whistle politics. 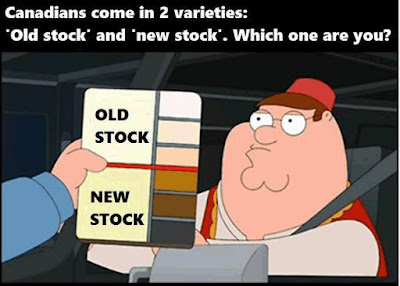 Here is one way to understood "old-stock"

Most Canadians, I believe, will not accept this racism. Therefore, they do not pay attention to dog-whistle politics and are not affected by it. Recognition of a problem is already half the battle.

To those Canadians who are affected by it, I suggest that you become aware of what such dog-whistle terms are doing to you. Look into your heart and discover the racism that lurks there. Get rid of it!

No one can claim to be totally without any racist attitudes. All of us have inherited at least a smidgen of racist thinking as a result of the societies in which we grew up and whee we now live. Let us, if possible, rid ourselves of this residual racism. And let us demonstrate that by opening our hearts, our wallets, and our country to the hords of refugees who want to settle in our midst.

Don't allow dog-whistle terms such as security or old-stock blind you to the needs of these men, women, and children who are desperate to leave their homelands and come to Canada aor other countries. Don't let security fears drive you; instead, let love motivate you.

They are the neighbors that God commands us to love. Many Canadians are already responding with open arms. Please join them by welcoming these refugees as well. If you don't live in Canada, you can do the same wherever you are. Let all of us welcome these refugees!