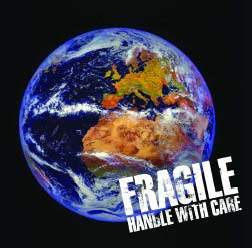 What does global warming have to do with theology? What is ecological or eco-theology? And why is such a theology necessary? These are some questions that I will try to answer in this post, which is the last in this series on global warming.

One contributing factor to this denial is that their theology does not deal with the problem. A quick perusal of most text books in systematic theology reveals that none of them discuss the environment, except tangentially when the responsibility of humans to care for creation is mentioned.

The great Reformers, Martin Luther and John Calvin, had a great appreciation for the creation as the forum of God's activity, but their concern was with the theme of salvation, with a focus especially on human beings. This focus became even stronger in succeeding generations, leaving little interest in the rest of creation.

Karl Barth, who is arguably the greatest theologian of the twentieth century and is famous for his rejection of natural theology, does discuss creation, but with very different concerns than people have today. This may help to explain why his theology went into eclipse some decades ago already. A study of several ecological theologies

Evangelical theologians today, with a few exceptions, have largely neglected the environment. This may be excused in part, since this topic has only recently become as important as it is. Not surprisingly, evangelical systematic theologians, who have the job of integrating the various aspects of theology, have written very little about the environment in general and global warming in particular.

There are many studies by Christian scholars in various disciplines dedicated to "A Christian View on the Environment," but that is very different from a major theological study on this crucial topic. The latter is as important as the former; it is urgently needed, especially in view of the current environmental crisis.

Any aspect of theology is always closely connected with all the other parts, and thus a theological study of the environment will be shaped by other doctrines and they, in turn, will be influenced by an ecological view.

There is an ecological theology as well that is rooted in the philosophy of Alfred North Whitehead and in process theology, but again there is not enough to examine the contributions made by these thinkers. 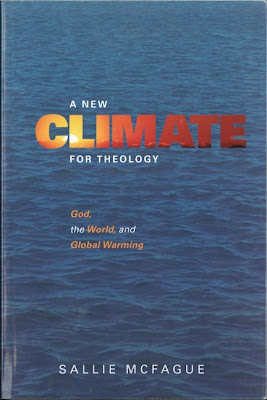 The latest book by Sallie McFague

I must mention, however, prominent eco-feminists, such as Sallie McFague and Rosemary Reuther, who have examined the role of what they call patriarchal theology in shaping the views of many Christians today, especially on the role of women and the environment. One does not have to agree entirely with their views to appreciate their force. They are pleading for a fundamental change in attitudes so that both women and the environment receive the emphasis they deserve.

The most radical voice calling for an ecological theology probably belongs to Matthew Fox, who is noted for his "creation spirituality" and has even called for a new reformation of Western Christianity by nailing his own 95 theses to the same door of the church in Wittenberg where Luther hung his theses almost 500 years ago.

The concerns of all these theologians, together with many others, represent a major turning point. The global environmental crisis has given a new and different focus to theology that one ought to be conscious of, even if one is unable to follow these theologians in every aspect of their thought.

According to some sources, ecological theology (or eco-theology as it is also known generally starts from the premise that a relationship exists between religions/worldviews and the degradation of nature. It explores the interaction between ecological values, such as sustainability, and the human domination of nature.

The last part of the definition about human domination is admittedly negative. This attitude stems from a now famous 1967  article by the historian Lynn White, entitled "The Historical Roots of Our Ecological Crisis."

White concluded that many environmental problems could be traced to the Christian notion that God gave this earth to humans for their use, and specifically directed humans to exercise dominion over the earth and all of its life forms. Some non-Christians have used White to blame Christianity for all the environmental problems the world faces today. Their argument, while not justifiable, has become widely accepted.

In reaction, Christian theologians have formulated various responses. One is the stewardship model that is preferred by evangelicals, while eco-feminism and creation spirituality are the models that are often chosen by liberal Christians. But are these responses enough? Or do we need to look for alternatives?

A new work on ecological theology by Ernst Conradie

Ernst Conradie of South Africa views ecological theology as an attempt to retrieve the ecological wisdom in Christianity as a re­sponse to environmental threats and injustices and, at the same time, to reinvestigate, rediscover and renew the Christian tradition in the light of the challenges posed by the environmental crisis.

He shows that contributions to ecological theology need to cover a wide range of theological sub-disciplines, including ethical theory and environmental ethics, biblical hermeneutics and exegesis, systematic theology, historical theology and various aspects of practical theology and missiology.

He and his group have already published extensive bibliographical surveys and done many studies that help to outline the contours of environmental theology, placing it in the context of a Christian theology which has, unfortunately, sometimes misinterpreted the biblical message and thus needs to be changed.

In an age of environmental despair they signal hope for the earth. In this connection, they closely examined the works of some noted theologians: John Calvin, Abraham Kuyper, Karl Barth, Douglas John Hall, Jürgen Moltmann, Bram van de Beek, and Arnold van Ruler. Unfortunately, I have been unable thus far to discover much more about the impressive work in theology done by Conradie and his co-workers.


I must admit that I feel very uncomfortable with the pantheism of Teilhard de Chardin and the panentheism of Sallie McFague, not to mention the mysticism of Matthew Fox. Yet these theologians have grappled with issues of the environment, something most other Christian theologians have yet to do.

The stewardship model is still very attractive to me; after all, this is what I grew up with. But it carries with it the enormous baggage of a concept of dominion that has prevailed in various guises, including the secular, for about two millennia. While this concept needs to be understood in context, as has been noted by others, much of the critique of it is deserved. It is based on a theology that places undue emphasis on humans as the peak of creation and the exclusive focus of God's saving activity.

What is the role of humanity within creation? What is the extent of salvation? And does salvation also include the creation? These are only a few of the many questions that an environmentally focussed theology must first answer. Then will Christians be able to deal with environmental problems in a theologically coherent way.

Perhaps it is time to admit that the old answers are not sufficient in an age when global warming threatens the world in which we live. Global warming is the number one environmental problem today. It too can be dealt with, but like all environmental problems it will require a concerted effort on the part of people everywhere, whether believers or not. Christians too must do their best as well. A re-examination of Christian theology is one place to start. 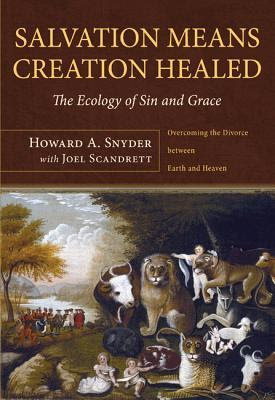 A new examination of the meaning of salvation

This does not imply the wholesale rejection of many traditional doctrines as Matthew Fox has done, but it does imply a willingness to review some doctrines so that there can be a change in emphasis. The concept of dominion has led some people not only to disregard the environment but even a few to propose that society should be ruled exclusively by biblical principles. This extreme view has been labelled "dominion theology."

Stewardship is still a useful metaphor to describe the human role in creation. It pictures humans as caring for the world that God has made. But it is too easy and too tempting to fall into the trap posed by the concept of dominion, which continues to lurk in the background. There are both good stewards and  bad stewards. Bad stewards are those who misuse the power given them for their own ends.

This is how many Christians behave when it comes to the environment. Moreover, they are often unwilling to admit their culpability. They hide behind a screen and loudly deny any responsibility. One can see this most clearly in the issue of global warming, which many Christians claim is only caused by natural factors.

Humanity has misused God's creation. Creation too needs to be saved. It is waiting eagerly for that day, as Romans 8:18-25 explains. Salvation extends beyond the needs of human beings. The creation too will be transformed and made new (Rev. 21:1-2, 5). That promise extends to the environment, which now already must begin to enjoy the benefits of what Christ has accomplished.

All of creation needs to be restored to its original intended state. Origen had formulated that as part of his doctrine of universal restoration in which everything, including the devil, is saved. He was condemned for this teaching, although apocatastasis, as this doctrine is termed, still has adherents within the Orthodox Church today, and can be found as well even among non-Orthodox thinkers such as C.S. Lewis.

But one does not have to subscribe to Origenism to accept that salvation includes all of creation, which very much needs restoration and healing. If this is the case, then Christians must be prepared to re-examine their whole theology, since all the different parts are connected, as I noted previously.

St. Francis of Assisi was obviously concerned about the restoration of the creation; he communed with it on a daily basis. 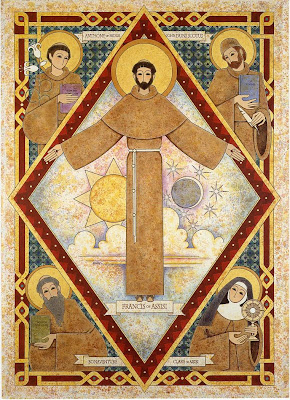 I do not have the time or the space to outline an ecological theology in this short post. I have made only a few suggestions. Others, like Conradie and his group, have gone much further. I want to commend them for this. I recommend that everyone who is interested in this enterprise join in the effort to revitalize Christian theology so that the environment can be properly protected and the effects of global warming.mitigated.

Long ago God commanded humans to take care of the world. That care must become an integral part of any ecological theology. Christians must be at the forefront of the environmental movement and not allow others who are motivated by greed to sidetrack efforts to save the environment. God does not expect anything less.

(Note: This will close this long series on global warming. Please comment on whether you found it helpful.) 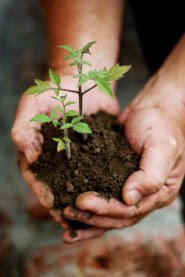