Islamophobia is alive today, as I was reminded again a few days ago when someone told me that the Qur'an only teaches hatred. Chalk that up perhaps to ignorance, but like many people, he expressed at the same time a fear of Muslims that I have noticed in many countries all over the world. I define this as Islamophobia.

Yet I just read an article claiming that Islamophobia does not exist, and another contending that since anti-Islamic crimes have declined after peaking in September 2001 the US cannot be described as Islamophobic.

However, if Islamophobia is defined as a fear or hatred of Islam and Muslims, then it does exist. In fact, some Muslims argue that this term is inadequate to describe the hatred of their faith and the discrimination they experience. They would prefer to call it 'anti-Islamic racism' since it combines a dislike of a particular religion and an active discrimination against the people who belong to that faith. 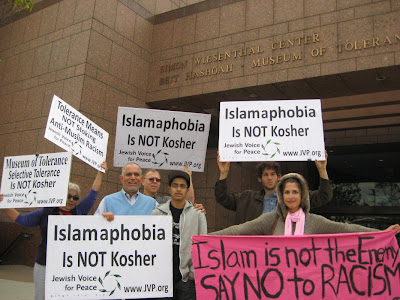 The Runnymede Trust in the 1997 document, "Islamophobia: A Challenge For Us All," identified eight components that define Islamophobia. These are just as relevant today as they were 15 years ago:
1) Islam is seen as a monolithic bloc, static and unresponsive to change.
2) Islam is seen as separate and 'other'. It does not have values in common with other cultures, is not affected by them and does not influence them.
3) Islam is seen as inferior to the West. It is seen as barbaric, irrational, primitive and sexist.
4) Islam is seen as violent, aggressive, threatening, supportive of terrorism and engaged in a 'clash of civilisations.'
5) Islam is seen as a political ideology and is used for political or military advantage.
6) Criticisms made of the West by Islam are rejected out of hand.
7) Hostility towards Islam is used to justify discriminatory practices towards Muslims and exclusion of Muslims from mainstream society.
8) Anti-Muslim hostility is seen as natural or normal. 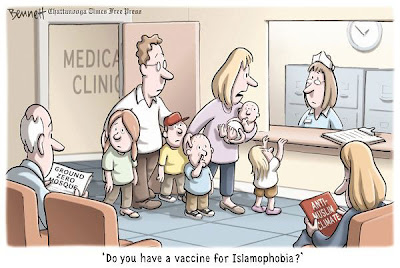 Islamophobia is a website that describes Islamophobia as "an irrational fear or prejudice towards Islam and Muslims." It includes many articles introducing Islam. Another site documents cases of Islamophobia.

Islamophobia is irrational, not Islam. We tend to fear the unknown or things that we are ignorant of. The list that the Runnymede Trust provides illustrates the appalling ignorance of many people about Islam. One of the most effective ways of combating Islamophobia is through education. It is by far the easiest, since deep-seated prejudices are harder to eradicate.

Some people, unfortunately, prefer to wallow in ignorance. They only know the myths that the media, or at least segments thereof, pedal in order to sell what purports to be news. 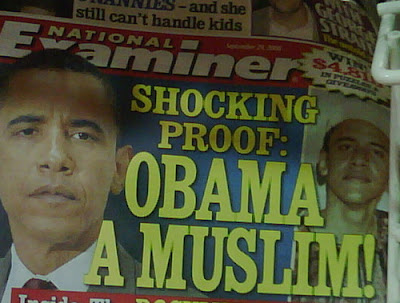 Nearly a fifth of Americans believe that Barack Obama is Muslim. This myth was popular during the 2008 election in the US. In this election year it is crucial that this blatant example of Islamophobia be eradicated once and for all. Unfortunately, it will probably be perpetuated by those who can benefit from such ignorance.

Europeans are not immune to Islamophobia either. Many there dread “Eurabia,” the ostensibly imminent Arab/Muslim takeover of the continent, even though its Muslim population is less than 3 per cent.

Islamophobia is not just interpersonal: it is systemic. It is intimately connected with sexism and violence, both of which are endemic in Western societies. That is why it is so difficult to eradicate Islamophobia. 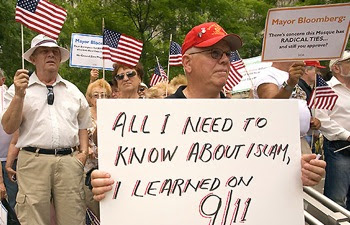 The media are complicit in perpetuating Islamophobia. Many journalists know little about religion in general and Islam in particular. Deadlines are one factor in their ignorance but much more crucial is the relegation of religion to the private sphere in the West. Secularized journalists thus find it especially difficult to understand Islam, a religion that contradicts this relegation, since it emphatically denies the public/private distinction.

Anti-semitism and Christophobia exist as well in Western societies. The former is attacked more often than any other group in the US, but this does not mean that Islamophobia is "a gross exaggeration that has been peddled by Muslim political leaders with an agenda," as one website puts it.

All hate crimes must stop, not just the one perpetrated against the group one belongs to. Islamophobia must be eradicated. The fight against every form of religious phobia is part of that process of eradication.

We must support each other so that one day every form of religious phobia will be gone. Isha'Allah. 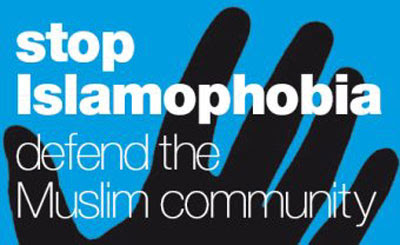