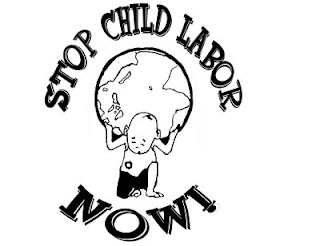 Child labor is an injustice that at one time was universal. Today it is still widely practiced and refuses to go away. During the Industrial Revolution, children as young as four were employed in factories with dangerous, and often fatal, working conditions. Child labor is now considered by wealthy countries to be a human rights violation, and is outlawed, while some poorer countries allow or tolerate it for economic and political reasons.

Child labor is work that harms children or keeps them from attending school. Around the world, the growing gap between rich and poor in recent decades has forced millions of young children out of school and into work. Yet there are laws in most countries that prohibit child labor.

The International Labor Organization (ILO) estimates that 215 million children between the ages of 5 and 17 currently work under conditions that are considered illegal, hazardous, or extremely exploitative. Of the 215 million, approximately 114 million (53%) are in Asia and the Pacific; 14 million (7%) live in Latin America; and 65 million (30%) live in sub-Saharan Africa.

Incidence rates for child labor worldwide, per World Bank data. The data is incomplete, as many countries do not collect or report child labor data (colored gray). The color code is as follows: yellow (<10% of children working), green (10-20%), orange (20-30%), red (30-40%) and black (>40%). Some African nations have more than half of all children aged 5-14 at work to make ends meet.
The United Nations adopted the Convention on the Rights of the Child in 1990, which was subsequently ratified by 193 countries. Article 32 of the convention addressed child labor, as follows: Parties recognise the right of the child to be protected from economic exploitation and from performing any work that is likely to be hazardous or to interfere with the child's education, or to be harmful to the child's health or physical, mental, spiritual, moral or social development.

Underage children work at all sorts of jobs around the world, usually because they and their families are extremely poor. Large numbers of children work in commercial agriculture, fishing, manufacturing, mining, and domestic service. Some children work in illicit activities like the drug trade and prostitution or other traumatic activities such as serving as soldiers. 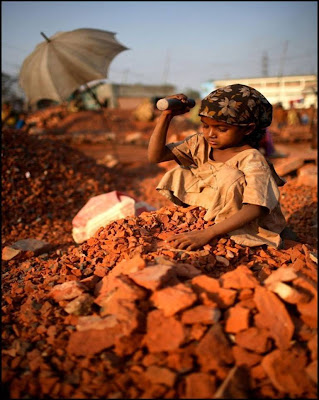 I have seen this myself in Nigeria

The ILO suggests poverty is the greatest single cause behind child labor. For impoverished households, income from a child's work is usually crucial for their own survival or for that of the household. Income from working children, even if small, may be between 25 to 40% of these household income.

Lack of meaningful alternatives, such as affordable schools and quality education, according to the ILO,  is another major factor driving children to harmful labor. Children work because they have nothing better to do. Many communities, particularly in rural areas where between 60-70% of child labor is found, do not possess adequate schools. Even when schools are available, they are too far away, difficult to reach, unaffordable or the quality of education is so poor that parents wonder if going to school is really worth it.

The ILO`s International Programme on the Elimination of Child Labour (IPEC), founded in 1992, aims to eliminate child labor. It operates in 88 countries and is the largest program of its kind in the world. IPEC works with international and government agencies, NGOs, the media, and children and their families to end child labor and provide children with education and assistance. 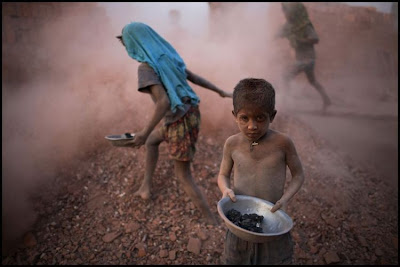 But powerful political, economic, and cultural factors stand in the way of eliminating child labor. Legislation by itself is not enough. If laws ban all forms of child labor that the poor need in order to survive, the informal economy, illicit operations and underground businesses will continue to thrive.

Yet there are moral and economic reasons that justify a blanket ban on labor from children aged 18 years or less, everywhere in the world. Child labor leads to poor labor standards for adults, depresses the wages of adults in developing countries as well as in the developed countries, and dooms the third world economies to low-skill jobs only capable of producing poor quality cheap exports. The more children that work in poor countries, the fewer and worse-paid are the jobs available for adults.

The availability of good schooling is thus the best way to stop child labor. This will take both time and money, but the latter is often in short supply in the developing countries. Yet, as economic conditions improve in these countries, the need for child labor will decrease. This happened in Europe and North America, and it will happen elsewhere too. The incidence of child labor in the world decreased from 25% to 10% between 1960 and 2003, according to the World Bank. 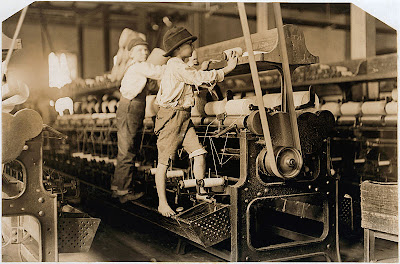 It happened even in the US: mill children in Macon, Georgia

The provision of universal education by itself is not a panacea, however. In many African countries, as I know from personal experience, this provision was not properly funded. Schools sprung up everywhere, but books and adequately trained teachers were in short supply.

Hence the reluctance of parents to send their children to school is understandable. Their children were better off working in the fields or contributing to the family income in some other way. It was, in fact, necessary.

In this blog I have written about many injustices that need to stop. Child labor is one of the worst, since by allowing it to perpetuate, we are depriving children not only of the education they need and deserve but also of the opportunity to be children who can play and socialize at will. Education is a basic human right that all children deserve. Children must also have the right to be children, and not forced to work. 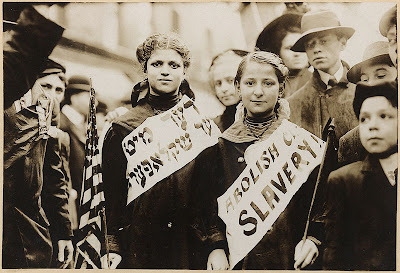 These girls, bearing signs in Yiddish and English, are part of a protest in 1909

There have been other attempts in the past to stop child labor. It is indeed a form of slavery that must end soon. We must do what we can to eliminate this grievous injustice.

Admittedly, many families in developing countries still need the income that their children can provide. They will not willingly give up that income. Thus we must be prepared to provide incentives for them to do so. That may involves expenses on our part, but we should do what we can, motivated out of love for the world`s most deprived children.

Let`s stop child labor through enforcing existing laws relating to child labor, by helping to provide children everywhere with adequate educational opportunities, by taking the small but important step of boycotting companies that use child labor, and by doing whatever else we can to improve their lot. We owe it to them! 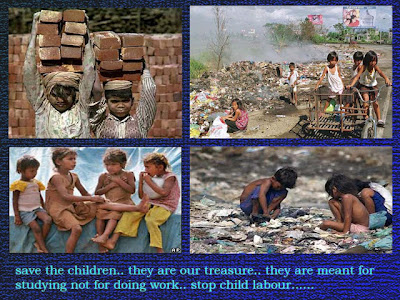