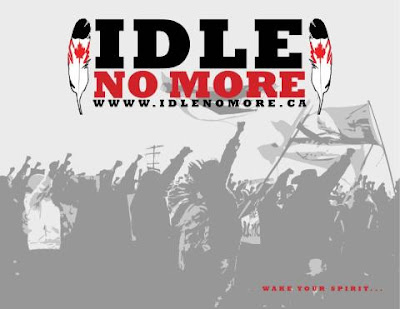 Idle No More  started with a hashtag on Twitter It was conceived in November by four Saskatchewan women who were frustrated with the federal government's latest omnibus budget bill. Idle No More is a First Nations protest movement that seeks to obtain renewed government guarantees for past treaty agreements and to halt what the organizers view as a legislative erosion of First Nations rights.

An omnibus bill is a proposed law that covers a number of diverse or unrelated topics. It is a favorite device of the Conservative government to get controversial legislation passed by including it as part of a larger bill.

Buried in the more than 400 pages of the last budget bill are amendments to the Indian Act that would allow Aboriginals to lease reserve land to non-Aboriginals, which organizers allege would result in a slow erosion of Aboriginal culture and language. It also contains changes to the Navigable Waters Act, which would loosen environmental restrictions for waterways in First Nations territory.

Idle No More organizers have also criticized the legislation for including changes to education, safe drinking water and elections that they allege were drafted without proper consultation. 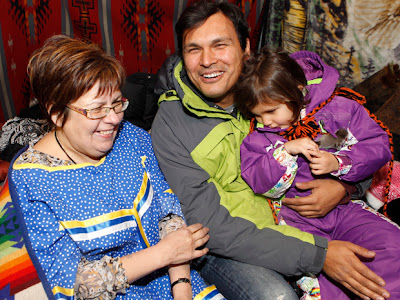 The movement’s most visible spokesperson is Theresa Spence, who is the chief of the Attawapiskat First Nation, a Northern Ontario reserve that was struck by an emergency housing crisis last year.

Since December 11, Spence has been on a hunger strike while camped on an Ottawa River island that is located only a few hundred meters from Parliament Hill, vowing not to consume anything, except broth and water, until she has been able to meet with Prime Minister Stephen Harper.

Harper may be hesitant to meet with Spence is because of her request for a “nation-to-nation” meeting. While the federal government has actively pushed for aboriginal self-governance, it has always been hesitant to endorse the view, held by many First Nations, that they are full, sovereign entities within Canada.

Since early December, protests spurred by Idle No More have included a 1,000-person demonstration on Parliament Hill, a blockade of a CN rail spur near Sarnia, and a variety of demonstrations in malls across Canada and parts of the US, including a demonstration in Washington, DC, on New Year's Day. 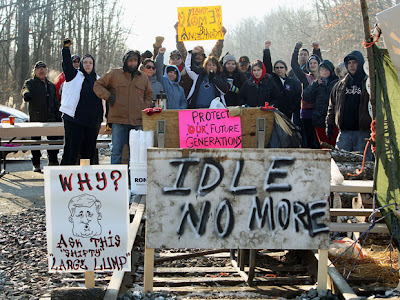 The protests largely quieted down over Christmas, although on Boxing Day scattered demonstrations were seen at malls in the Prairie provinces, Sarnia remained blockaded, and Theresa Spence still had\s not eaten.

The Idle No More movement is not likely to disappear, even if Spence manages to meet the Prime Minister. The issues that it raises are too important for the government to ignore any further.

A major government report in 1996 called “People to People, Nation to Nation: Highlights from the Report of the Royal Commission on Aboriginal Peoples” identified the problems and laid out a twenty-year plan to implement the recommendations it proposed. It included a cost/benefit analysis of all 444 recommendations.

The report notes that a careful reading of history of Canada shows that this country was founded on a series of bargains with Aboriginal peoples -- bargains that this nation has never fully honored. Treaties between Aboriginal and non-Aboriginal governments were agreements to share the land, but they were replaced by policies intended to remove Aboriginal people from their homelands, suppress Aboriginal nations and their governments, undermine Aboriginal cultures, and stifle Aboriginal identity. 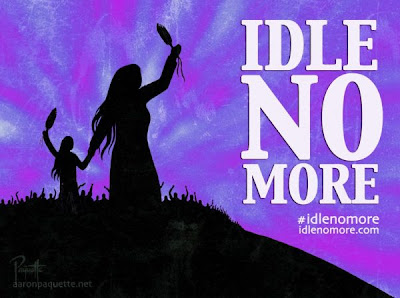 In the 16 years since this report was released, almost nothing has been accomplished. The Idle No More movement wants to change that situation. The status quo is not working, and is in fact a form of colonialism.

Successive governments have tried to absorb Aboriginal people into Canadian society, thus eliminating them as distinct peoples. The policies pursued over the decades have undermined, and almost erased, Aboriginal cultures and identities. That is assimilation and totally wrong.

Assimilation policies have failed because Aboriginal people have an enduring sense of themselves as peoples with a unique heritage and the right to cultural continuity.

The report goes on to explain that a fundamental change is necessary. Canadians need to understand that Aboriginal peoples are nations. That is, they are political and cultural groups with values and styles of life that are distinct from those of other Canadians.

Aboriginal people have lived as small, loosely federated nations for thousands of years before the arrival of Europeans. As nations, they forged trade and military alliances among themselves and with the new arrivals. To this day, Aboriginal people's sense of confidence and well-being as individuals remains tied to the strength of their nations. Only as members of restored nations can they reach their potential in the 21st century. 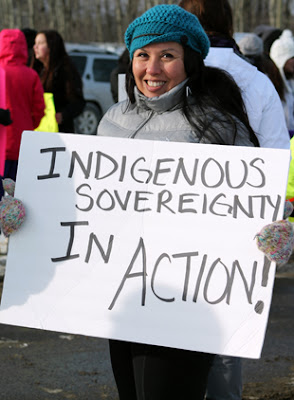 Another report is not needed; instead, the recommendations of 1996 report should implemented. It is a shame that this report has been allowed to gather dust. Unfortunately, very few Canadians have read it.

It is doubly shameful that Canadians have not spoken out more about the intolerable situations in which their Aboriginal brothers and sisters have been allowed to exist for many generations. They have read about it and seen it on TV, but they have not responded in love and protested the injustices involved. 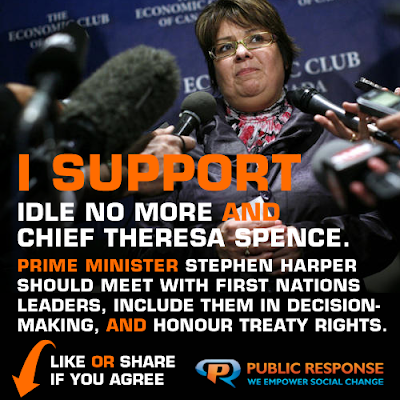 The Idle No More movement gives them an opportunity to do so. All Canadians who pride themselves on a sense of fair play and a concern for the underdog should speak out and side with Theresa Spence in her desire to meet with the Prime Minister. Add your name to this letter of support.

Especially people of faith in Canada should be in the forefront of protesting the intolerable situation of the First Nations. They must demonstrate their support for the Idle No More movement in whatever way they can. I am doing what I can by writing this post. Please do what you can as well.