Am I an antisemite when I criticize Israel? 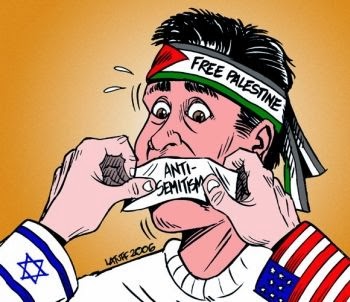 "Some openly call Israel an apartheid state. This is the face of the new anti-Semitism. It targets the Jewish people by targeting Israel and attempts to make the old bigotry acceptable for a new generation" -- Prime Minister Stephen Harper of Canada speaking to the Israeli Knesset, January 20, 2014.

Antisemitism is very real, yet when I listened to Harper's address, I was shocked to hear him dismiss any criticism of Israel as antisemitism (I prefer the unhyphenated form). His pro-Israel stance is well-known, but to associate such criticism with antisemitism is unacceptable to me and countless others around the world.

While Harper was roundly applauded by most members of the Knesset, two Arab representatives walked out in protest. But he did not come to Israel to ingratiate himself with the Arabs and Palestinians, whom he had promised $66 million earlier in the day. He was there to demonstrate his continuing support for Israel.

Harper, accompanied by a delegation of about 200 cabinet ministers, businessmen, religious leaders, and staff, most of whom had their expenses paid for courtesy of Canadian taxpayers.

Harper showed his solidarity with the Israeli people, as he explained in his speech to the Knesset:

"It is a Canadian tradition to stand for what is principled and just, regardless of whether it is convenient or popular. Support today for the Jewish State of Israel is more than a moral imperative. It is also of strategic importance, also a matter of our own, long-term interests." Harper's motivation is not only political -- to get the Jewish vote in Canada -- which has often gone to other political parties in past elections, but ideological. Harper and Prime Minister Benjamin Netanyahu of Israel are close friends who share similar world views, at least on many political issues.

The other main political parties in Canada, the Liberals and the NDP, also clearly support Israel. Indeed, that has been the official policy of the Canadian government for decades. While there are some differences on the Palestinian question and the matter of Israeli settlements, there is full agreement on the right of Israel to exist, especially in the face of the hostility of some Arab nations who refuse to acknowledge that right.

In his speech Harper evidenced nothing but public praise for Israel:

"Neither Israel’s existence nor its policies are responsible for the instability in the Middle East today. Israel is the only country in the Middle East, which has long anchored itself in the ideals of freedom, democracy and the rule of law."

Thus Harper concluded by promising Canada's unwavering support; a support that contrasts sharply with the criticism that Israel constantly receives from many European nations: "Through fire and water, Canada will stand with you."

What does Harper mean by the term antisemitism? Scholars have disputed this term for a long time. But I understand him to mean public criticism of Israel. In a press conference, it became clear that the two prime ministers were not in full agreement on the issue of settlements. Netanyahu admitted as much, even though Harper would not acknowledge it at all. 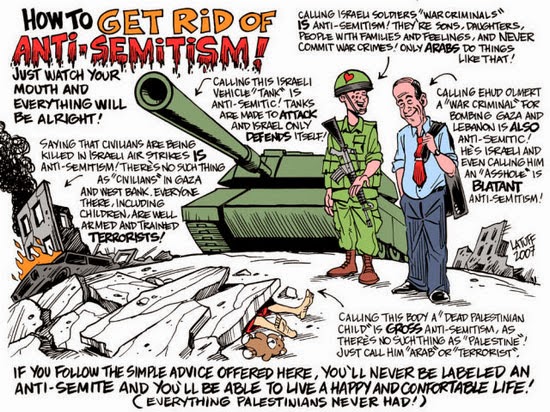 Any differences between the two leaders were aired in private, which is the way Harper prefers to deal with friends. Thus he is opposed any critical actions or statements in public. He explained further in his speech:

"As once Jewish businesses were boycotted, some civil-society leaders today call for a boycott of Israel. On some campuses, intellectualized arguments against Israeli policies thinly mask the underlying realities, such as the shunning of Israeli academics and the harassment of Jewish students."

By avoiding any public criticism of Israel, Harper may be the perfect guest, but he is also being disingenuous. He is not only a consummate politician but he unwittingly reveals his strong ideological bias as well.

Aside from the political and economic aspects of his ideological program, where he wants to gain votes and promote better trade between Canada and Israel, as is evidenced by the assortment of businessmen he took with him, he took along an assortment of rabbis and a large dose of evangelical preachers.

Both the rabbis and preachers were popular in Israel. None of them are antisemites by any stretch of the imagination. They were carefully selected as Zionists in orientation. Perhaps as Zionist as Harper himself, who is more Zionist than many Israelis. 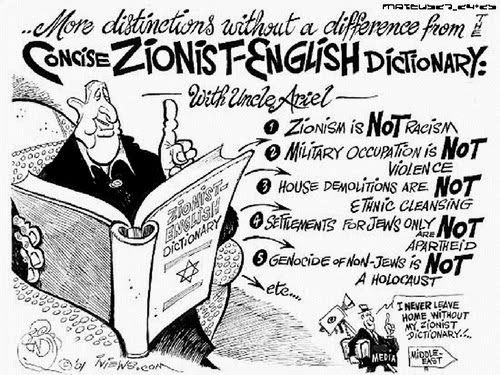 Anyone who is at all critical of Israel would never have received an invitation from the Office of the Prime Minister. That is sad, because this way ordinary Israelis are denied the opportunity to see Canadians whose views differ from those of .Harper.

Speaking personally, I am critical of Israel, as I have made very clear in several posts in the last few years. Such criticism, however, does not make me an antisemite. I probably understand the Israeli-Palestinian conflict better than many Canadians, and for this reason I am prepared to blame both sides when necessary and appropriate. I have tried to be balanced, but there are times when Israel needs to be criticized.

Prime Minister Harper represents the government. I am only a private citizen, who is largely unknown in Canada and even more so in Israel. Therefore I can speak more boldly that can Harper, but he should not accuse me, or anyone else for that matter, of antisemitism when this happens.

Such a broad definition of antisemitism is not helpful. It stops any further discussion. If Harper only wants to take along people who agree with his public stand on Israel that is his business. I am not offended in the least that he did not invite me. After all, who am I? In fact, I probably would not have accepted the invitation.

I am very concerned when a fellow Christian -- Harper is an evangelical Christian, even though he does not advertise the fact very much -- takes a position on Israel that is diametrically opposed to my own. Indeed, as is evident from many other policies that he espouses, we are at least in politics polar opposites. Since he is the prime minister, however, only his views matter on the world stage. I have only this blog to voice mine. 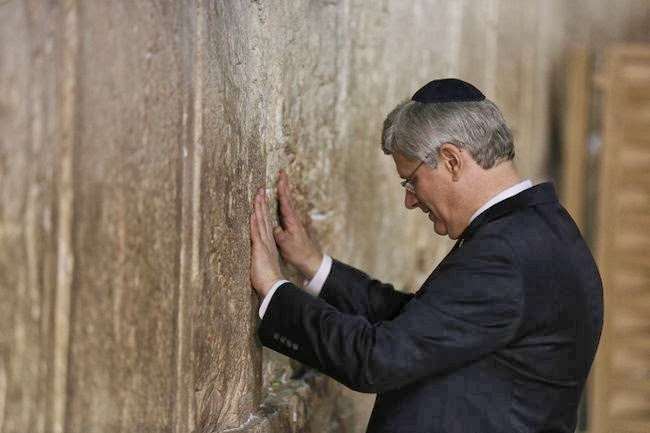 Supposedly as Christians we should share many elements of our world views, but I doubt that is the case here. Harper has more in common with Netanyahu than he has with me. He probably has even more in common with the evangelical preachers he took with him.

That is fine with me. It just proves that there is more than one world view that can be labelled Christian. It is unfortunate that the world only saw the one that Harper and his entourage displayed during the tour of Israel.

How about those of us who seek justice not only for the Israelis, who need a homeland but are threatened by their neighbors, but also for the Palestinians whose land is slowly but steadily being stolen from them by means of Israeli government edicts? Am I an antisemite when I mention the cause of these Palestinians?

Am I therefore unaware of the threat that Israel faces from its Arab neighbors? No, I am very much aware of the dire needs of the Israelis. But I am also conscious of what Israelis have done to the Palestinian people and continue to do.

Please, Mr. Harper, stop branding all those who are at all critical of Israel as antisemites, especially if you do so to earn cheap browning points with the Israelis. I have never liked your politics, and now I like them even less. You may be popular in Israel, but the rest of the world thinks otherwise. Your attitude to Israel, need I remind you, is why Canada was denied a non-permanent seat on the UN Security Council in 2010.

You have made me ashamed to be a Canadian. When you speak on behalf of Canada, you may think you represent all Canadians, but there are many Canadians who disagree with you. I know I do. I will continue to criticize Israel even at the risk of you labeling me an antisemite.