"Putin's Games" and the games he played to get there

I am writing this post only a few days before the opening of the Olympic Games in Sochi. In it I briefly discuss these Games and the role Vladimir Putin has played and hopes to continue to play on the world stage.

The 2014 Winter Olympics in Sochi, Russia, have already been labelled "Putin's Games." Vladimir Putin was the main driving force behind the Olympics coming to Russia, but more than that these games will give him an opportunity to strut on the world stage and to burnish his own image and that of his country. Both are in great need of polishing.

This is only the second time that the Olympics are being held in Russia. The first time was in Moscow in 1980. Russia was then still part of the Soviet Union.

Putin pressured the International Olympic Committee to select Sochi in spite of its sub-tropical climate, defeating Salzburg, Austria, and Pyeongchang, South Korea. Reputedly, he used money -- tons of it -- to win this coveted prize for Russia. He has now made these games the most expensive in Olympic history.

Sochi was a favorite summer resort place that was noted for its warn climate during the Communist period. At one time ordinary workers spent their summer vacations there. Today it is still a playground, especially for for the rich in that country.

It was proposed to hold the games in two main venues. Hockey, skating, and curling would be hosted in the Olympic Park in Sochi, and the mountain events in Krasnaya Polyana, a village about 60 km by road from Sochi. Krasnaya Polyana is now a favorite skiing place for Putin. It is only a short helicopter ride from his residence on the Black Sea near Sochi, where many of Russia's government and business elite have homes as well. 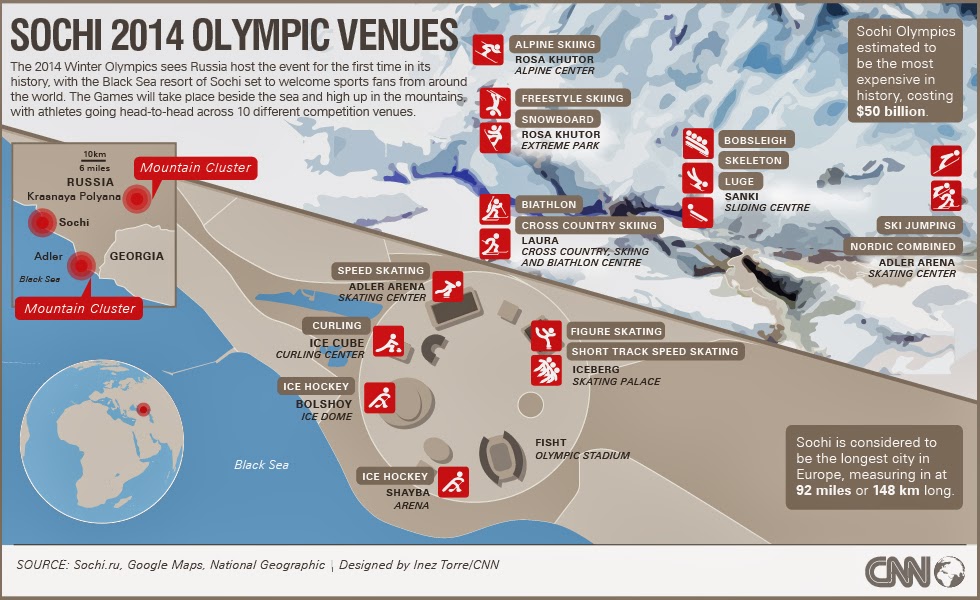 The proposed budget of US$12 million has since then ballooned to more than four times that amount. It is estimated that between one-third to one-half of the total has been siphoned off through corruption. Some of Putin's KGB friends have received fat contracts. Thus it is not surprising that only a few days before the opening of the games some hotels are still not ready. Some buildings were so badly situated that they are sliding down a hill. And some people have had their homes confiscated without any compensation.

Permit me to give one example of excessive spending. As I wrote last year, the road from Sochi to Krasnaya Polyana is so expensive ($9.4 billion) that it could have been covered in its entirety with a layer one cm thick of Russian black caviar (which costs as much as $10,000 per kilo). I have not done the computation myself, but it is a lot of money for one road.

At that price the road should be considerably better than it was when we first visited Sochi in 1999. Then the ride to Kransnaya Polyana and back was hair-raising. Now there will not only be this new highway but also fast trains connecting the two sites.

Aside from the corruption, the cost overruns, and the problems with the infrastructure, the biggest issues that Putin faces as he stands on the world stage at the opening and closing ceremonies of the Sochi games are security and gays. Both issues have the potential to diminish the role of Russia in the world and to give Putin a personal black eye, since he has so much personal prestige invested in these Olympics.

The security threat has already cut into ticket sales. Apparently many relatives of the athletes are reluctant to go to Sochi because of the terrorist threat, and thus tickets for many events, even the prestige ones, are still unsold. The athletes are also concerned. It is to be hoped that this concern for themselves and their family and friends does not affect their performance in their events. That is hardly surprising, however, under these circumstances. The danger of terrorism is very real, especially since Chechnya is only about 450 km away. 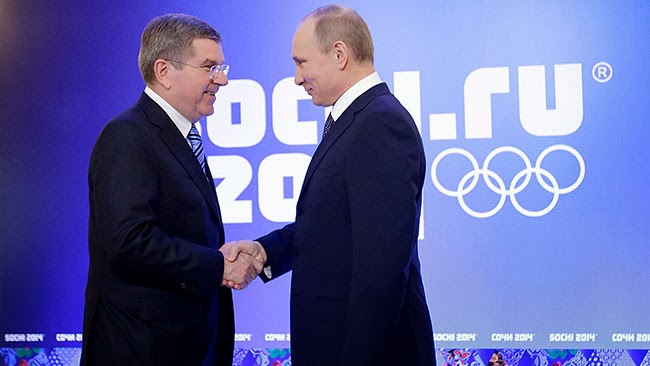 The Russian government has deployed more than 40,000 police to provide security at the games. A 100 km-wide ring of steel surrounds Sochi and Krasnaya Polyana to provide protection. Security cameras are everywhere. Phone conversations will be monitored. Yet whether that will be enough to deter all terrorist attacks remains to be seen. Suppose there are already terrorists hiding in Sochi. If a major incident does take place despite all the security measures, Putin will end up with even more egg on his face.

The gay rights issue too has already affected attendance. President Barack Obama and Vice-President Joe Biden have announced that they will not attend the Sochi Olympics. Prime Minister Stephen Harper of Canada, French President Francois Hollande, and some other western leaders have indicated the same. And, as if to rub salt in the wound, the US promised to send some gay athletes.

This boycott is largely symbolic, although all these leaders deny that their actions are a political statement, unlike at the Moscow Olympics. Putin, no doubt, is offended, yet this may help to cement his relationship with the Russian people. But in the eyes of the world Putin has already lost a lot of face, and this will damage his international prestige. These are, after all, his games, and he wants to restore Russia's former glory.

Putin has responded by stating that gays are welcome in Sochi. But he can hardly say anything else, since the opposition in the western world to Russia's anti-gay law has been very loud. Putin has to walk a narrow line. On the one hand, the international community wants to protect LGBT people; on the other hand, the anti-gay law expresses the sentiment of many Russian people, especially the Russian Orthodox, who have been vocal in their condemnation of gays.

It is noteworthy that the Russian government paid for building a new Russian Orthodox church in Sochi. This can be seen as an expression of the symbiotic relationship between the two as well as official support for the stance of the ROC on gays.

Will Putin's dream for the Sochi Olympics turn into a nightmare? It is premature to conclude that, but I do suggest that this dream is the culmination of a long process which started when Putin first became president of Russia in 2000. Now this dream is possibly over, and with it Putin's legacy. 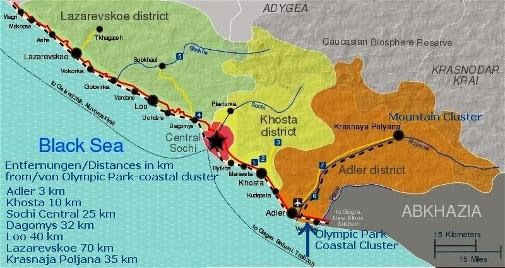 Putin has steadily acquired more and more power ever since former President Boris Yeltsin selected him as prime minister in August 1999, and announced Putin as his successor. Putin became acting president when Yeltsin resigned on December 31, 1999. I was surprised when I heard the news.

I remember the animated discussions I had with my political science students at Moscow State University in the years before Putin's selection. We tried to guess who the new president might be, but Putin's name was never mentioned before 1999. If memory serves me correctly, no political commentator either guessed his name at the time.

Putin served as president for two four-year terms, which were scarred with a number of incidents, including the Kursk submarine disaster, the Moscow theater hostage incident, and the Beslan school hostage crisis. Yet he weathered all of them, in spite of widespread critique of his actions. Corruption, as I mentioned already, is endemic. Many friends of Putin have enriched themselves through the Olympics. Putin himself, some claim, is worth $70 billion, but that seems excessive. But he is, at the very least, comfortably well off.

When Putin was barred from a third term, he arranged that Dmitry Medvedev was elected as president, who soon after the election, appointed Putin as prime minister of Russia. In 2012 Putin was again elected as president. His present six-year term expires in 2018. He has already said he may seek a fourth term. If he does win then, this would make him Russia longest-serving ruler since Josef Stalin.

The Sochi Olympics will give Putin an opportunity to strut on the world stage and to bask in the glory these games will give Russia. That is his dream, but this dream may yet turn into a nightmare. The list of problems is long. Corruption, infrastructure, security, and gay rights, which were mentioned already, are only a few.

The major problem Putin faces is the economy. It is in disarray. The Olympics can serve as a distraction, a sort of "bread and circuses," yet this problem especially has the potential to destroy him and his presidency. 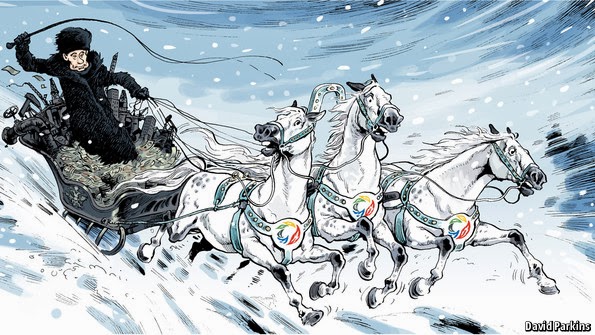 The Economist notes that the opening ceremony on Friday will include the image of the Russian "troika-bird" from Nikolai Gogol’s "Dead Souls," where Gogol writes:

"Rus, aren’t you soaring like a spry troika that can’t be overtaken? The road is smoking under you, the bridges thunder, everything steps aside and is left behind!…Is this lightning thrown down from heaven? Other nations and states gaze askance, step off the road and give [you] right of way."


The mystical regeneration of Russia that Gogol foresaw may not happen under Putin's presidency. Instead, the Sochi Olympics could mark the beginning of the end for this macho president, especially if all the security he has implemented fails and a few terrorists do manage to wreak havoc.

Ultimately, however, it is the economy that is most likely to destroy Putin. The Olympics could be a harbinger of disaster. I hope and pray that does not happen. Yet I have a sense of foreboding, if not for "Putin's Games" then for the Russian economy.

I have lived in Russia for many years and know how serious its problems are, but I have also witnessed the resilience of the Russian people. They will survive, in spite of what happens to Putin, his games, and even the Russian economy. They survived for 70 years under Communism and they will survive this too.