We all know the type: people who believe that they, and only they, are right. In addition, they use their faith to justify their behavior. These people are found everywhere: among people of every faith and, indeed, every branch of every faith, as well as among those who insist they have no faith at all.

The question is: how can we deal with such people -- those who claim that their belief is right and permits them to do whatever they want? Don't we all believe that our faith is the correct one? And doesn't our faith influence our behavior? The issue here, however, is the misuse of faith.

Examples of such misuse abound. A short list would include jihadists such as the Islamic State who kill in the name of Allah because their interpretation of the Quran mandates death for infidels and even Muslims who stand in the way of resurrecting the caliphate. There are other groups as well, notably al-Qaeda, and indeed, many more. Violence is characteristic of all these groups.

On that list, there would also be Christians ranging from some who would kill so-called abortionists for the sake of protecting the lives of the unborn to others who have such an implacable hatred of President Obama that they reject all his policies out-of-hand to yet others who hate homosexuals and Muslims, not necessarily in that order. Again, the lives of many such groups are marked by violence.

Hindus, Jews, even Buddhists have also been known to kill people of other faiths or even their own. Atheists deserve to be listed as well since they are not immune from killing either or from expressing their disdain of those who disagree with their agenda. Every religion, it seems, has its violent, extreme fringe. 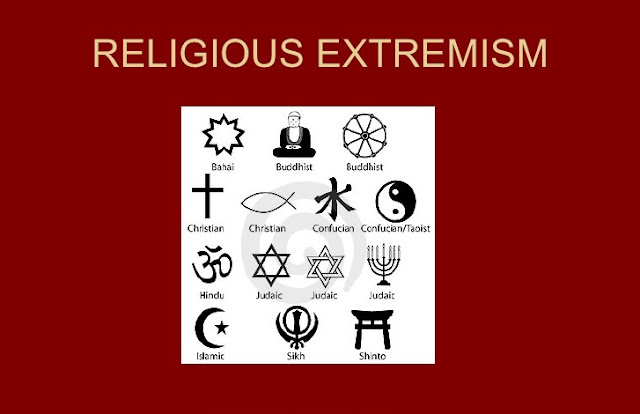 Admittedly, these are extreme examples, but others that are closer to home can be adduced as well. Racists can be found everywhere in the world, as can people who are sexist or who reject others for other reasons. All of them are convinced that their beliefs are justified and correct, and many are not afraid of using violence.

How should we deal with such people, who seem thoroughly reprehensible? One can argue with them, but they will refuse to budge from their iron-clad convictions. Yet there are others who are not quite as objectionable and yet remain unshaken in their beliefs, whether it is about the ordination of women, same-sex marriage, gun-control, or whatever, including their political stance.

The solution I suggest is this: "generous orthodoxy." The term is not original with me. In fact, it stems from a quotation by Hans Frei, an American postliberal theologian who taught at Yale University: "Generosity without orthodoxy is nothing, but orthodoxy without generosity is worse than nothing."

Frei's comment has been critiqued for its limitation of true generosity to those who espouse "orthodoxy," but I doubt that was Frei's intention. It is the second part, however, that intrigues me. If we want to be "orthodox," we must also be "generous." That is a thought that we can all learn from. 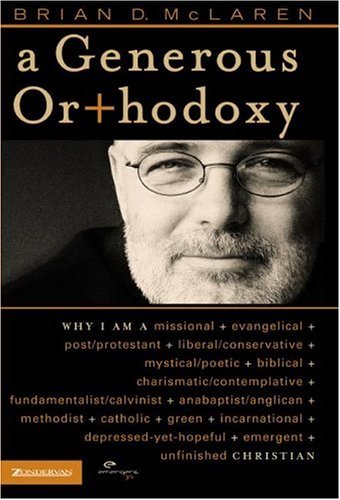 The term itself later became the title of a book by Brian McLaren, A Generous Orthodoxy, in which the author does not try to establish what is and is not "orthodox." Instead, he draws the reader toward a way of living that looks beyond the divisive "us/them" paradigm to the unitive "we."

While McLaren restricts himself to applying this term to Christian theology, I prefer to apply it to the life of every person of faith, whether Christian or not, although my focus is especially on Christians who claim to be orthodox, however that term may be defined.

The word orthodoxy (Greek for "right belief") has acquired many negative connotations. In Western culture, orthodoxy sounds restrictive and unimaginative at best, and oppressive and tyrannical at worst. But it does not have to mean that.

We cannot do without orthodoxy. Orthodoxy exists so that we have a way of testing everything else against it. For this reason, the orthodox faith, at least in the Christian context, should by definition always be generous just as God is generous. Only then does it become a true standard. God is love, and he requires us, in turn, to love others. That is the true measure of orthodoxy.

Christian orthodoxy, therefore, should not be narrow or restrictive but it must always be marked by a generous loving spirit, one that is never fearful but is open to others. The same thing ought to be true of the orthodoxy of other faiths.

Orthodoxy has its counterpart in orthopraxy (Greek for right living). They are two sides of the same coin. If we combine "generous orthodoxy" and orthopraxy, we get a fuller idea of how all people of faith should live.

Those who claim to be orthodox must demonstrate that claim by living generously, that is in a loving manner. If they practice right living, there are some major implications. Here I mention only a few of the most obvious ones. There are many, many more that could be added.

There is no room for any form of violence, much less killing. People who call themselves Christians should not be carrying guns wherever they go, especially not to church. If fact, they should not possess guns at all, except possibly for sport. But that is questionable if it includes killing helpless animals. That too is violence against creatures that God has made.

There is also no room for the lack of charity that persists between denominations or within them. The language that is often used and the suspicion that reigns between various factions of churches is not only inappropriate but much more a denial of the unity that they enjoy in Christ.

A similar remark can be made about the divisions that exist within Islam, Judaism, and other religions. Even more serious is the warfare that has been waged in the past between different faiths and that continue to be waged. There is no place for Islamophobia and Semitism in the lives of people of faith, nor should groups within each faith attack each other whether with hateful words or, even worse, weapons that maim and kill. Hatred spews out of their mouths.

In the public square, people of faith must be equally circumspect. The sort of language that some of the Republican candidates for the presidency have been using is not only inappropriate for people who call themselves Christians but is scurrilous and racist. How can these men square their behavior and their professed faith? 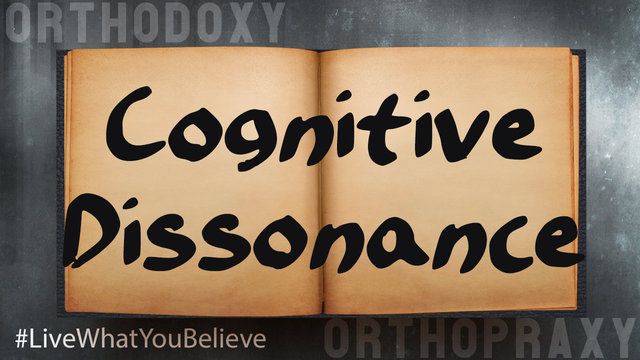 What none of these people fully appreciate, much less understand, the cognitive dissonance there is between what they believe and what they do, in other words, between orthodoxy and orthopraxy. To some degree, we all have a certain degree of cognitive dissonance between our beliefs and our actions, but in some people this becomes extreme. They may claim to be orthodox, but their behavior proves otherwise. "By their fruit shall you know them" (Mat. 7: 16, 20).

We often have to deal with extremists, sometimes on a daily basis. While few of us will ever be threatened directly by ISIS, all of us have experienced forms of extremism, whether in church or on TV. During election periods. extremists come out of the woodwork, and there are always politicians who cater to them in order to attract votes. This is despicable!

Many of these people may not even seem to be extremists. If you are a gun owner and you are persuaded that the government is going to take your guns away, you may also resort to violence i n order to protect your perceived right to possess these weapons.If you are opposed to abortion, you might do the same in order to protect the unborn.

If you are afraid that the flood of refugees across our borders pose a potential threat to you and your loved one, you may want to expel all people from a certain region or of a certain religion. If you believe that these people worship another god than you do, you may want to silence those who claim otherwise. 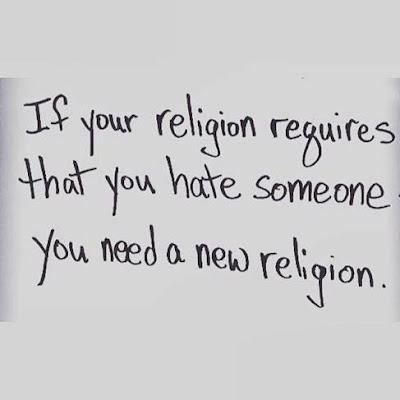 If this is what you believe, perhaps you need a new faith. Both the Hebrew and Christian Bibles teach about love: love of God and love of neighbor. The sacred books of many other faiths also speak about love. Love lies at the heart of all human relationships. Without love, humans cannot function.

Hatred has no place in any true religion. If your religion requires that you hate someone, you need a new religion. People like Donald Trump and Ted Cruz deny their Christian faith when they spew hatred. Those who support such people are also not behaving as Christians ought to behave.

Perhaps you are wondering why I did not just write about love, as I have done in an earlier posting. My response would be this: I want to focus especially to those who claim to be orthodox but do not live as they ought to live. If you know such people, please ask them to explain how their faith and their behavior are connected. Put the onus on them: If you are a Christian, how can you hate Muslims, etc.?

Orthodoxy should lead to orthopraxy. If it doesn't, then something is lacking -- love. Without love, their faith is meaningless. It is less than nothing, as Frei puts it. We must live our faith if our faith is to mean anything. As James writes (2: 17), "Faith by itself, if it is not accompanied by action, is dead." 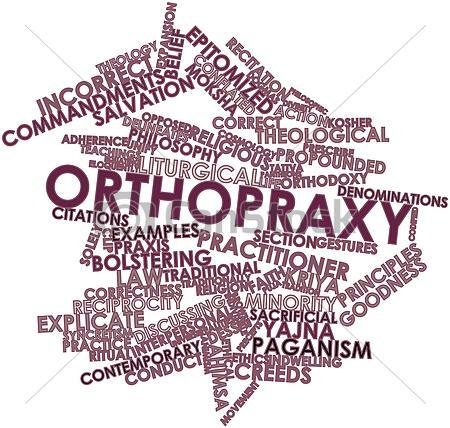