Do Jews, Christians, and Muslims worship the same God? 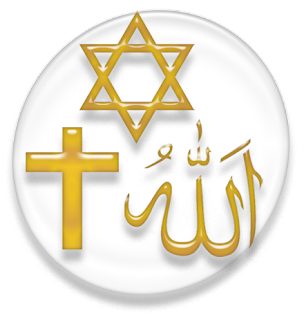 Judaism, Christianity, and Islam are the three major Abrahamic religions. Together they number more than 3.8 billion people or about 55% of the worlds population (Christians, 32.3%; Muslims 22.9%; Jews, 0.2%). They are closely related, closer than many people realize.
Do Jews, Christians, and Muslims worship the same God? The answer is, to use the medieval Latin title of Peter Abelard's famous book, Sic et Non (Yes and No), which was an exercise in dialectical logic intended for his students. 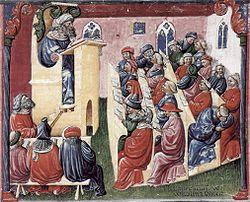 This is not an abstract question suitable only for logicians. It has been asked innumerable times, and is more often than not answered in the negative. Yet the answer is more important for us than ever, especially after the "Arab Spring."
When former President Bush stated publicly some years ago that "we worship the same god," he was attacked by the religious right in the U.S., which affirms the contrary. I suspect that many Christians today will agree with this negative stance. Moreover, many Muslims would also answer this question with a resounding, no.
In spite of this ocean of negativity, I will answer, yes (but with some qualifications and a necessary correction).
The primary qualification and correction relates to the way the question is framed: Do Jews, Christians, and Muslims worship the same God? The word "same" is ambiguous. Is this what we mean: Do all Jews or all Christians or all Muslims worship the same God?
The answer to that question is clearly, no; there are many different conceptions of God among Christians, for example. Some visualize him as a stern, angry, bearded patriarch, who saves only a faithful few; others describe him as a loving Father, who will save everyone; while still others find themselves somewhere in between. 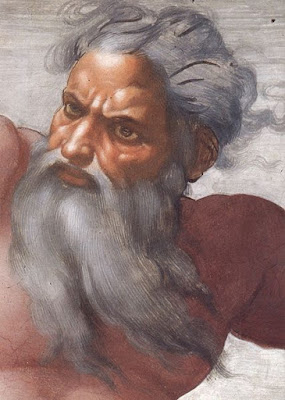 Hence, I prefer to pose the question this way: Do Jews, Christians, and Muslims worship a common God? Each faith, by tracing itself back to its roots in Abraham, can acknowledge that the God they now worship in their own distinctive way was once one and the same.
According to Muslims, Abraham was haneef, which means someone who believes in and serves only Allah. Jews and Christians can say something similar. Thus God is common to all of them. This formulation of the question allows room for different conceptions of God, not only between these faith but also among individual believers.
I added Jews to this question because many Christians are prepared to acknowledge them as believers in the same God they believe in. Yet these same Christians want to exclude Muslims. This attitude has hardened post 9/11. We have demonized Muslims today, with enormous repercussions for interfaith dialogue and, perhaps more crucially at present, for working together with Muslims in strengthening democracy in the Middle East.
He was at one time the same God of all believers, as even Muslims who are emphatic in their "no" will admit. Yet they immediately add that Christianity has misinterpreted belief in Allah through the doctrine of the Trinity.
Christians, they charge, have corrupted the original revelation from God, and thus they affirm the Trinity, and related to this, the divinity of Christ, who for Muslims is only a prophet, though an important one. 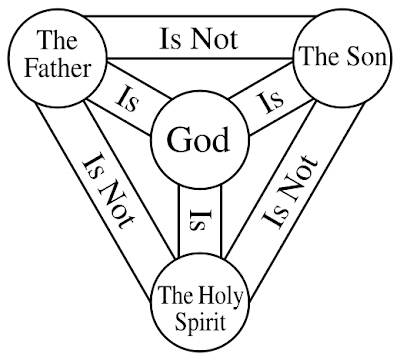 A well-known symbol of the Trinity
Jews, Christians, and Muslims are united in many ways. I want to list some of them, at least according to their official teachings.
1. There is only one God. Jews, Christians, and Muslims are all monotheists. The worship of any other god is idolatry.Whether in the form of the Jewish "Shema"--"Hear, O Israel: The Lord our God, the Lord is one" (Deuteronomy 6:4)--or the "Shahada" of the Muslim--"There is no god but God, and Muhammad is the messanger of God" (لا إله إلا الله محمد رسول الله [lā ʾilāha ʾillallāh, Muhammad rasūlu-llāh])--these are both strong, monotheistic affirmations.

The Shema Yisrael, read liturgically
Christians also confess the Shema. And they can affirm the first part of the Shahada, as I often point out to my Muslim dialogue partners (without thereby becoming Muslims).
2. God is one. Muslims use the Arabic term tawhid to describe this oneness, which can be translated as "absolute unity." To add an associate to God is called shirk. Because of the doctrine of the Trinity, Muslims accuse Christians of this, which for them is the greatest of all sins.
And to add insult to injury, Muslims caricature the Trinity as the Father, the son Jesus, and Mary, the mother of Jesus. This was the result of inadequate conceptions of the Trinity that were current among the Christians that the earliest Muslims came into contact with and that persisted for many more centuries. 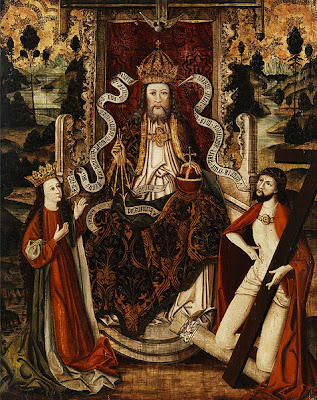 Father, Son, and Mary, as depicted in late Middle Ages
Any attempt to explain to Muslims and Jews, that this doctrine was articulated to oppose the idea of believing in three gods, is futile. They, like some Christians, find the Trinity impossible to understand. No one, in fact, can fully understand it. We can only describe it while stuttering.
3. God is distinct from the world. God created everything that is not God. The Creator-creature distinction is fundamental to all three faiths, and results in heresies when this is denied. Polytheists or idolaters do not share in this belief. 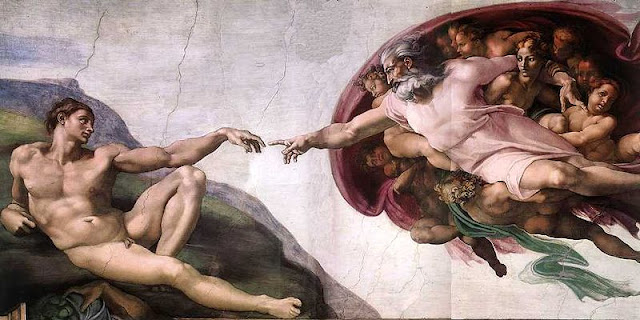 4. God is holy, loving, merciful, and just. These are just a few of the attributes of God that all three faiths agree on, even though they may not understand them in precisely the same way. But, as I have already noted, members of these faiths do not always agree on what each means.
5. God has revealed himself through the prophets and in the scriptures. These faiths do not agree, however, either on the content of the revelations nor their primary purpose. While Christians believe that God revealed himself in order to save us, Muslims insist that God's revelation is meant to provide guidance for living in this world.
Jews are still expecting the promised Messiah, or have secularized this concept so that it is fulfilled in the modern state of Israel.
Christians believe that Jesus is the Christ, the Messiah, and that he is the Word of God. The Bible too is the Word of God, but this is mediated through human beings who were inspired through the Holy Spirit.
Muslims claim that the Qur'an was not mediated; it came down directly from heaven and was revealed to Muhammad, who was illiterate and thus entirely passive. Qur'an simply means "descended."
Now is not the time to get into the different understandings of sin and salvation in each of these faiths. There is wide divergence, even between the adherents of each religion, on this issue. Personally, my view of original sin now is closer now to that of Eastern Orthodoxy than to the Augustinian understanding that I was taught and have in turn taught to others. 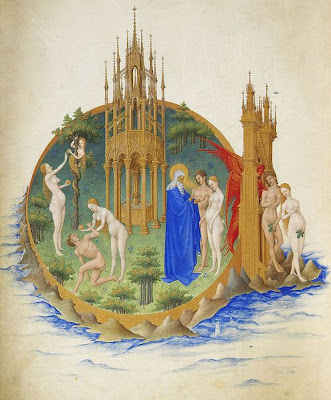 The Garden of Eden
That there enormous differences between these three religions, which is reflected in their understanding of God, is undeniable. In spite of these differences, however, I have tried to describe very briefly what these faiths do have in common. I am an ecumenist; by nature, therefore, I want to examine what people have in common so as to be able to bring them closer together.
Those who have a narrow conception of their own faith and specific doctrines within it may not appreciate my search for these areas of communality.
Do Jews, Christians, and Muslims worship the same God? Yes, with some qualifications, as I have already remarked. My yes, however, should not be taken to mean that Jews and Muslims are automatically saved. Salvation is by grace, and is not based on an intellectual knowledge of God.
I do not want to take into my purview now other faith groups, such as Baha'i, Jehovah Witnesses, or  Mormons. These are sects, the first largely of Islam and the others of Christianity. Don't forget, Christianity started as a Jewish sect, and while Muslims would reject this assertion, Islam too was a Jewish-Christian sect at  the beginning.
There are many aspects of this topic that I have not dealt with, such as the names for God in Judaism and Islam, nor have I discussed the use of icons in Christianity, or at least a large segment thereof, and the absolute rejection of any images of God by both Jews and Muslims, although both do use symbols. Islam is noted especially for its calligraphy of the name of Allah. 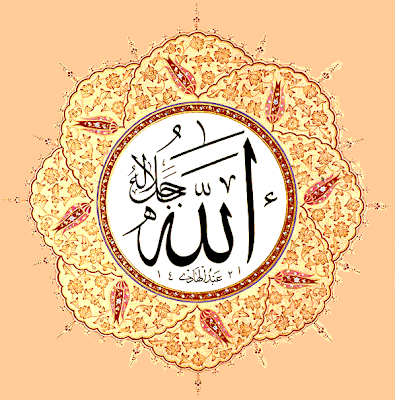 Please feel free to interact with me on this topic. Admittedly, I have only scratched the surface, and thus am unable to do justice to this important issue. Even a book might not suffice.