Jack Layton (1950-2011)
My friends, love is better than anger.
Hope is better than fear.
Optimism is better than despair.
So let us be loving, hopeful and optimistic.
And we’ll change the world.
(Excerpt from Layton's last letter to Canadians, two days before his death)
The words "loved"and "politician" are rarely brought together in this order in the same sentence. Yet an exception can be made for Jack Layton, who died on August 22, 2011, after a brief bout with a newly discovered but undisclosed form of cancer. His death has led to an outpouring of grief that Canada has not witnessed before in living memory.
Many never knew the man personally, and many more never voted for him as a politician. But in death they demonstrated their love for him.
Canadians from every walk of life gathered throughout this country to pay their last respects to this amazing man. They signed books of commemoration across the country, stood in line for hours to view his casket in Ottawa and Toronto, chalked a memorial to him at Toronto City Hall, lined the streets of Toronto to see the funeral procession, and thronged into Roy Thomson Hall in Toronto where the funeral was held. 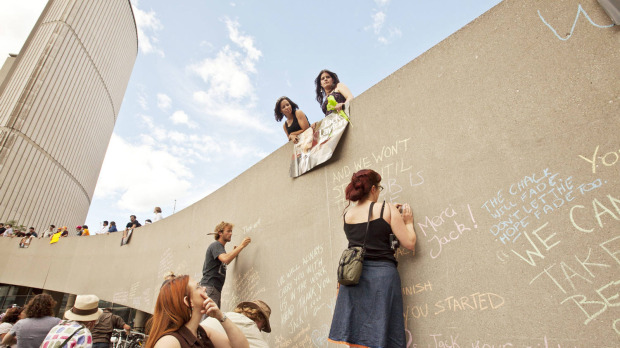 What makes this outpouring of grief so remarkable is that Jack (as everyone called him) was the leader of the New Democratic Party (NDP), a mildly socialistic political party, at least by Canadian standards. Some Americans might want to call him a Communist, but he was not. The best way to describe him is as a lifelong fighter on behalf of the underdog.
He was born into a Christian family. Although he was not overtly religious, he is remembered as a deeply spiritual man, whose commitment to a caring society was rooted in the Christian faith.
His pastor said in a radio interview that Jack viewed each day as a day of worship. Rev. Brent Hawkes of Metropolitan Community Church officiated at the funeral, which was planned according to Jack's instructions.
He was born in Montreal and grew up in Hudson, not far from Montreal. He had an instinctive grasp of the aspirations of the people of Quebec. This contributed to the NDP winning more seats than ever before in the last federal election; his party won a total of 103 seats in parliament, and made him the leader of the official opposition.
My purpose is not to eulogize Jack, but rather to examine what made him stand out from the crowd of other politicians, and made him the most loved politician in Canada, in death if not already in life.
He had a way of electrifying crowds. In the two televised debates (one in English and the other in French) he related to the viewers in a way that won him many seats not only in Quebec but throughout Canada as well.
What explains this phenomenon? The short answer seems to be that he gave people hope. He had a vision and he conveyed that vision to others. In this way he gave them the hope they needed. He also loved people.
Hope is in short supply today. People everywhere gravitate towards those who have a vision of hope. President Obama's election slogan, "Yes We Can," inspired people. Jack did the same.
When it came to hope, he knew what he was talking about. He had a PhD in political science. He had studied under George Grant, and later he became a professor at Ryerson University, where he wrote a book on homelessness. More recently he wrote a book on public policy. He also fought cancer for many years.
He acquired the art of compromise as a member of Toronto City Council. That is where he met his second wife, Olivia Chow. They formed a team at City Hall and later in Ottawa, where Olivia is also a Member of Parliament.
Jack loved people. He showed this by speaking to them in their own language. He was a first-rate public speaker in both of Canada's official languages. He spoke good, but colloquial, French.
He even spoke some Cantonese, although he got into trouble once when he wanted to thank his mother-in-law at a dinner, but said instead (by using the wrong tones), "Thank you for the good sex." Nevertheless, the Chinese community adopted Jack. They loved him, just as he loved them. 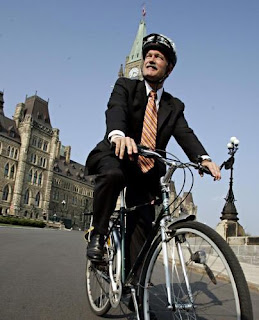 Jack bicycled everywhere in Toronto and Ottawa, even in the snow
He also shard his optimism. In the letter he issued shortly before his death he sought again to inspire Canadians, in particular the youth, to change Canada, and by extension the world. For decades he inspired several generations to follow in his footsteps.
The NDP will choose a new leader, probably early in the new year. But finding a leader with Jack's charisma will be difficult. He was their Moses who led them to the border of the promised land, though he was not allowed to enter it.
In the last election campaign he walked with a crutch because of a hip replacement. He had also fought prostrate cancer for a long time. He was the star of the election campaign, and an inspiration to cancer sufferers everywhere. Now this fighter has succumbed to an undisclosed cancer. 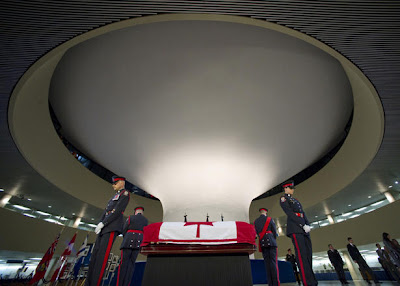 Casket lying in state in the rotunda of Toronto City Hall
Whether Jack saw that hope in biblical terms, we will probably never know. There are many such texts, some of which he may have remembered from his childhood.

I suspect, however, that he may have memorized the lines from Alexander Pope about hope:
Hope springs eternal in the human breast;
Man never Is, but always To be blest:
The soul, uneasy and confin'd from home,
Rests and expatiates in a life to come.
(An Essay on Man, Epistle I, 1733)
What Jack believed about eternal life is up for grabs. In an interview with the CBC, his pastor gave his own view, "Whatever that means to you."
Nevertheless, he inspired numerous Canadians and gave them a reason for hope in this life. Eternal life, after all, begins now already for believers.

Jack thought his life had been well-lived, though he admitted having made many mistakes. But who of us has not made mistakes. It is what we do with our lives in spite of these mistakes that matters.
Jack indeed lived a good life, and now even in death he continues to inspire people. At his family's request, his funeral was called, "A Celebration of Life." More than 1,700 guests were invited to the service at Roy Thomson Hall; another 600 members of the public. who started lining up the previous afternoon, attended inside the building as well.
I walked near the casket as it was brought from Toronto City Hall to Roy Thomson Hall. Thousands of people watched the service on widescreens set up in a park outside the hall. It was also televised nationally on many networks. Unfortunately, I too had to watch the service in the park, since I could not get into the hall. 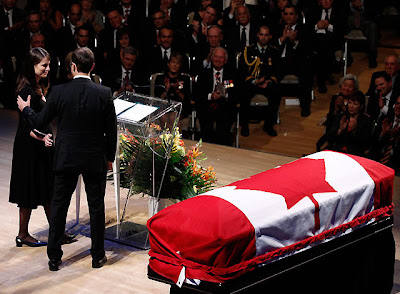 Jack's children, Mike and Sarah, embrace as they deliver their eulogy at his funeral
Stephen Lewis brought the main eulogy at the funeral. He closed with these stirring words:
"When my wife and I met with the family a few hours after Jack died, Olivia said, as she said in the video, that we must look forward to see what we all can accomplish together.
I loved Jack's goodness and his ideals in equal measure. Watching all of you react so genuinely to his death, the thousands upon thousands who lined up for hours to say a last goodbye in Ottawa and Toronto, it's clear that everyone recognized how rare and precious his character was.

We're all shaken by grief but I believe we're slowly being steadied by a new resolve and I see that resolve in words written in chalk and in a fresh determination on people's faces. A resolve to honour Jack by bringing the politics of respect for all, respect for the Earth and respect for principle and generosity back to life.
My wife Michele reminded me of a perfect quote from the celebrated Indian novelist, activist and feminist Arundhati Roy. Jack doubtless knew it. He might have seen it as a mantra. 'Another world is not only possible, she is on her way. On a quiet day I can hear her breathing.'"
Jack would also have approved of what Brent Hawkes said about him, "Folks, it's amazing to pay tribute to him. But now it's time to get to work."