Faith (or the lack thereof) and the U.K. riots 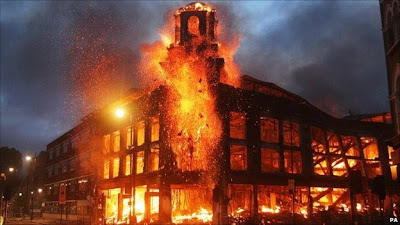 The recent riots in the U.K. have mortified that country, and have shocked the rest of the world. The images of burning buildings and widespread looting have been seared into brains worldwide for several days in a row. Everywhere people are asking, "Why?" What can explain the murder and mayhem in merry, old England?

The U.K. has witnessed riots before, so has France, and, more recently, the U.S. and Canada. But those riots  either had a racial component or were caused by rambunctious youth after their favorite team had won or, sometimes, lost an important game.
These riots also bear no resemblance either to those earlier this year in Tunisia, Egypt, Yemen, and now Syria. They are totally different.
In the U.K. politicians of every stripe have universally condemned the riots, but their analyses are as divergent as their political ideologies. Yet there is more than enough blame to go around. Left and right, respectively, have blamed everything from public spending cuts to pure criminality; in the latter case, it is claimed, any further explanation would be to excuse the culprits. 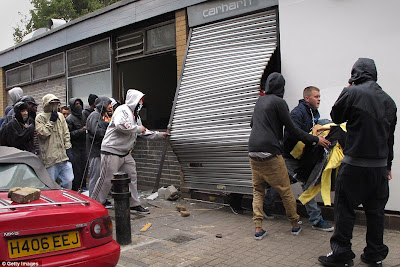 But that reasoning is too simplistic. First and foremost, there has been a breakdown of the barriers that prevent most youngsters from running amok. In the minds of the rioters, an inherent sense of right and wrong, shame, and concern for their job and education prospects, seem no longer to exist.
Because of the changing nature of the economy, there is indeed a shortage of low-skilled jobs. But there has also been a crumbling of family structures and discipline. A moral malaise has gripped a minority of young Britons.
The cracks in British society—economic and moral—have opened up, and they are deeper than many realize. The youth today see politicians who pad their expenses, or bankers who fiddle with their bonuses. And thus some of them see no reason not to help themselves as well. Those who were arrested include not only young "hoodlums" but also university graduates, and even a law student.
In contrast to this sense of self-entitlement of some Britons, the response of people of faith in England, in some cases recent immigrants, has been astounding. If the former typify those who evidence a lack of faith, the latter demonstrate that faith has not yet died in England. 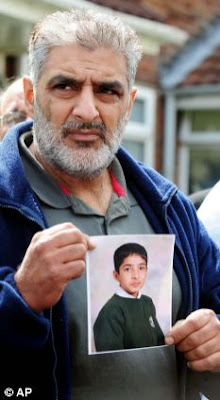 Tarik Jahan with a photo of his son
Tarik Jahan is truly a man of faith. His son, Haroon, was one of three young men who were murdered by a hit-and-run driver in Birmingham during the riots. But Jahan did not call for revenge, nor did he use the occasion of his son's death to denounce everything that was wrong in British society.
Instead, he made an open and straightforward declaration of his faith, "I’m a Muslim. I believe in divine fate and destiny, and it was his destiny and his fate, and now he’s gone. And may Allah forgive him and bless him."
An article in the Economist described him this way: "Like the great majority of Muslims in this country, Mr. Jahan is hard-working, clean-living, guided in his conduct by religious belief, and unshakable in his devotion to the ideal of family life."
Another clear expression of faith occurred when more than 700 Sikhs lined up to defend their temples from potential arsonists. Sikhs have a proud tradition of valuing each human being, male and female, as equal in God’s eyes. Theirs is a religion in which the family is paramount.
Whether Muslims, Sikhs, Jews, or Christians, there are still many parents in the U.K. who have instilled into their children the importance of working hard for money to buy things, rather than hurling a brick through a shop window to help themselves.
Paramount too among their values would be a sense of altruism--a concern for others--that could not be more different from the sense of self-entitlement that been so grotesquely on display in London and elsewhere.
These altruistic children come largely from religious families. All the main religions are unshakable when it comes to teaching about right and wrong--not stealing, not harming others, not coveting goods, not seeking instant gratification, and so on.
Many years ago, I read an article in the Atlantic entitled, "Can We Be Good Without God?" (http://www.theatlantic.com/magazine/archive/1989/12/can-we-be-good-without-god/6721/?single_page=true). The author came out strongly in favor.
But in the U.K. and many other countries people have decided that they no longer need God, and have tried to eliminate him from the public arena. That they have not succeeded entirely is by God's grace. 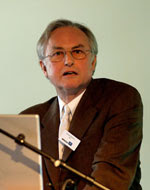 Richard Dawkins
Atheists such as Richard Dawkins and Christopher Hitchens have provided the intellectual tools that a whole generation of parents, who felt they did not need God, could use bolster their arguments. At the risk of mixing metaphors, their chickens have now come home to roost.
The symptoms of this malaise are evident everywhere, and not just in the U.K. The riots there are just the latest example.
Aside from politicians and bankers who use the public purse to benefit themselves, there are many others today who have lost their moral compass.
Our contemporary "gods" are the stars of the entertainment and sports worlds, whose talents do not always justify their outrageous salaries, but a whole generation (or generations) seemingly worships them.
Muslims are not entirely wrong when they accuse Christians of promoting secularism and immorality. Cries to the contrary are not enough. Christians must demonstrate their faith in the way they live. Islam emphasizes orthopraxy or right living.
In the riots in the U.K., Muslims and Sikhs were singled out by the media for their faith. Their response has provided an example to a nation and a world where faith is often lacking. 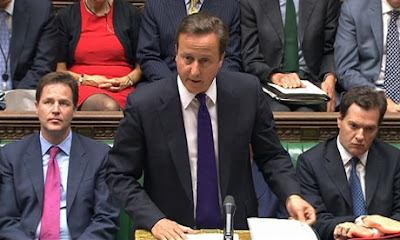 Prime Minister David Cameron in the House of Commons on August 11
David Cameron, the Prime Minister of the U.K., identifies himself as a Christian. In the debate in the House of Commons last week he condemned the rioters in very forceful language, "And to the lawless minority, the criminals who've taken what they can get. I say: We will track you down, we will find you, we will charge you, we will punish you. You will pay for what you have done." 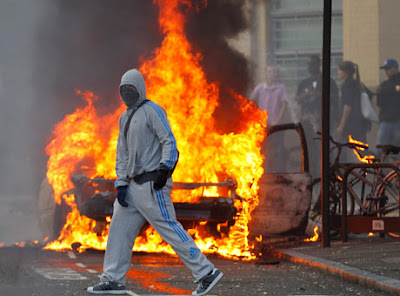 As I am writing this, more than 1,400 people have been arrested, and some have already been convicted and sentenced. Yet I ask, is punishment the best and most appropriate response?
In the case of the Vancouver riots, I argued for restitution. As it turns out, not a single rioter or looter there has been charged so far, in spite of the existence of numerous photos and videos. Apparently, there are major differences in the legal system in Canada and the U.K .that help to explain this.
Restitution should be considered in the U.K. Is it appropriate to convict an 11-year old girl, or people who were caught up in the heat of moment and did things they immediately regretted?
Perhaps the parents of those who have been arrested, especially if they are underage, should be held liable in some way. After, they probably neglected to inculcate their children with moral values.
Tarik Jahan has modeled appropriate behavior after the murder of his son. He is more "Christian" than many people in the U.K. He is a man of faith, and Christians should emulate him. 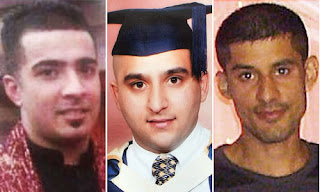 The three young men killed in Birmingham, including Haroon