The persecution of Christians 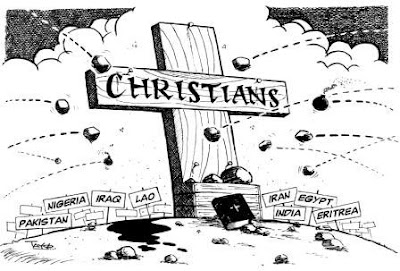 Many people today would probably look askance at a headline that read: "The War on Christians." Yet that was the headline that Newsweek used for the cover on its February 12, 2012 edition. The Economist had used a similar headline in an article on December 31, 201, entitled, "Christians and lions" that had as subtitle, "The world’s most widely followed faith is gathering persecutors. Even non-Christians should worry about that."

Ayaan Hirsi Ali, the author of the Newsweek article, is as blunt as the headline. Enough with all this talk "about Muslims as victims of abuse," she charges, because really it's the other way around: "A wholly different kind of war is underway--an unrecognized battle costing thousands of lives. Christians are being killed in the Islamic world because of their religion. It is a rising genocide that ought to provoke global alarm." 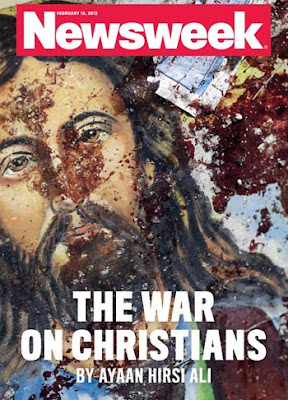 But to suggest that a genocide is underway is a serious charge. Moreover, she alleges that it is widespread: "In recent years, the violent oppression of Christian minorities has become the norm in Muslim-majority nations stretching from West Africa and the Middle East to South Asia and Oceania."

To make matters worse, she claims that the media have been cowed into silence, due to "the influence of lobbying groups such as the Organization of Islamic Cooperation--a kind of United Nations of Islam centered in Saudi Arabia--and the Council on American-Islamic Relations."

She explains: "Over the past decade, these and similar groups have been remarkably successful in persuading leading public figures and journalists in the West to think of each and every example of perceived anti-Muslim discrimination as an expression of a systematic and sinister derangement called 'Islamophobia'--a term that is meant to elicit the same moral disapproval as xenophobia or homophobia."

Genocide is a very serious charge, however. And it is truly shocking to see this charge made in a national magazine. She pleads that we, the readers, must "please get our priorities straight .... Instead of falling for overblown tales of Western Islamophobia, let’s take a real stand against the Christophobia infecting the Muslim world." If a genocide is in progress, she fails to provide any evidence, but in the process she manages to smear the Council on American-Islamic Relations, a major American Islamic advocacy group. 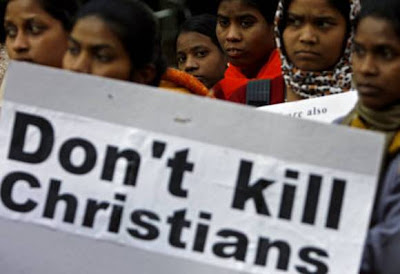 Yet, as the article in The Economist indicates, Christians are being persecuted in increasing numbers today.
Christianity is growing almost as fast as humanity itself, but its 2.2 billion adherents cannot count on safety in numbers. The article notes that is partly because the locus of the world’s largest religion is shifting to hotter (in several senses) parts of the world.

According to a report published by the Pew Forum in December, the Christian share of the population of sub-Saharan Africa has soared over the past century, from 9% to 63%. Meanwhile, the think-tank says, the Christian proportion of Europeans and people in the Americas has dropped, respectively, from 95% to 76% and from 96% to 86%. Philip Jenkins has described this phenomenon in great detail in his 2002 book The New Christendom.

Moving from the jaded north to the dynamic south does not portend an easy future, as the article shows. In Nigeria scores of Christians have died in Islamist bomb attacks. I would add most recently in Jos, where a suicide bomber drove a car into a church building as the service was about to begin. 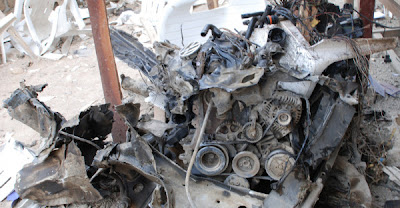 Car packed with explosives in Jos

The article mentions that in Iran and Pakistan Christians are on death row, for “apostasy”--quitting Islam--or for blasphemy, and that dozens of churches in Indonesia have been attacked or shut. It also notes that two-thirds of Iraq’s pre-war Christian population have fled the country, while in Egypt and Syria, where secular despots gave Christianity a shield of sorts, political upheaval and Muslim zealots threaten Christian groups.

But the article explains, not all Christianity’s woes are due to Muslims. The faith faces harassment in formally communist China and Vietnam, as well as in India, where Hindu nationalists want to penalize Christians for making converts. In the Holy Land local churches are caught between Israeli encroachment on their property and Islamist bids to monopolise Palestinian life. Many have noted already that Christians have been leaving the region in droves, and thus the followers of Jesus may yet become a rarity in his homeland. 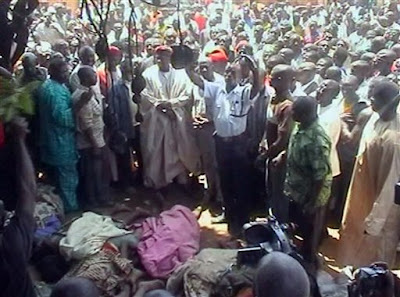 Crowd with bodies of victims of yet another killing near Jos

Yet this article refuses to call the persecution of Christians a crusade, much less genocide, as Hirsi Ali does. Of course, the word "crusade" has terrible associations for Muslims, and thus it would never be used by them or even of them. Muslims do use the word "jihad," but this word refers in the first place to the internal struggle that every believer must practice, and only by extension to the war against infidels, as some Muslim extremists prefer.

A spokesman for the Islamic militant group Boko Haram revealed on Sunday that they are planning a “war,” according to the report, on Christians in the next few weeks, but he probably said "jihad." The group, he explained, “will launch a number of attacks, coordinated and part of the plan to eradicate Christians from certain parts of the country.” The spokesman added that the government “cannot be prepared for what is to come.” Without providing specific details, he noted, “we will create so much effort to end the Christian presence in our push to have a proper Islamic state that the Christians won’t be able to stay.” 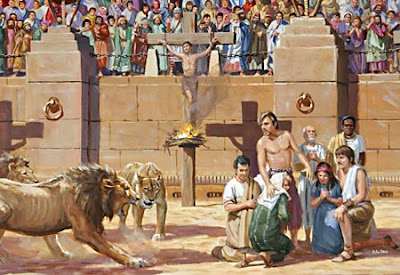 Persecution has existed since the beginnings of the Christian church. the early Christians were persecuted for their faith, at the hands of both the Jews and the Romans. This continued from the 1st century until the early 4th, when the religion was legalized.

Later, in the Islamic period, anti-Christian pogroms occurred. Under sharia, non-Muslims are obligated to pay special taxes, which contributed a significant proportion of income for the Islamic state and persuaded many Christians to convert to Islam. Christians subject to Islamic rule were allowed to practice their religion with some notable limitations. As People of the Book they were awarded dhimmi status, which, although inferior to the status of Muslims, was more favorable than the plight of adherents of non-Abrahamic faiths.

Christian men were not allowed to marry Muslim women, but Muslim men in contrast were allowed to marry Christian women. Christians under Islamic rule had the right to convert to Islam or any other religion, while an apostate to Islam faced severe penalties that could even include the death penalty.

Yet this form of persecution was minor as compared to what Christians had to endure at the hands of other Christian groups during the medieval and Reformation periods when millions in total died for their faith.

There have been many other instances of the persecution of Christians later in China, Japan and India, but none of them are of immediate concern, since my focus is the contemporary period. Nevertheless, it is noteworthy that today some of these countries have very large populations, yet at the same time place great restrictions on the exercise of some religions. 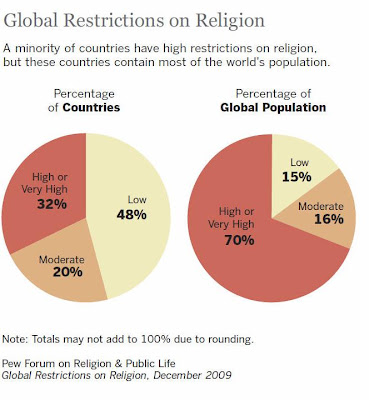 According to Pope Benedict XVI, Christians are the most persecuted group in the contemporary world. This is true if one carefully examines what has happened to Christians in the last few decades in countries as diverse as Afghanistan, Albania, Algeria, China, Egypt, India, Indonesia, Iran, Iraq, Lebanon, Malaysia, Nigeria, North Korea, Pakistan, Saudi Arabia, Somalia, Sudan, Turkey, and Yemen. In most of these countries Muslims constitute the majority, although other religions are also at fault. (A map of some of these countries can be found at http://www.releaseinternational.org/pages/find-out-more/persecution-map.php.)

One statistic that I find especially troubling is this: in the 16th century, Christians formed half the population of Iraq, while in 1987, the last Iraqi census counted only 1.4 million Christians. While Christians represent less than 5% of the Iraqi population, they make up 40% of the refugees now living in nearby countries. 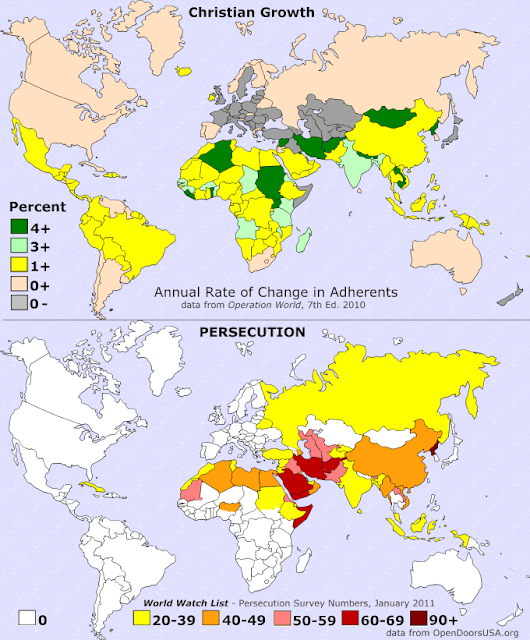 Correlation between Christian growth and persecution

Political correctness prevents some Christians from mentioning this persecution, but there are many Christian groups that are not afraid to speak out loudly and clearly about the experience of their fellow believers in many countries all over the world. Yet many people today will still look askance at a headline such as "The War on Christians."

It is regrettable, therefore, that Hirsi Ali was correct in calling the persecution of Christians "war," but she is wrong about terming it "genocide." This former Muslim has done all Christians who suffered for their faith a great disservice by exaggerating the role of a handful of Muslim extremists such as Boko Haram.

Every religion can adduce evidence of the persecution of their faith. It is only too easy for them to claim that no one has suffered the way they have suffered. That is not my intention today; I simply want to be honest in introducing this problem. There is "Islamophobia" today, but there is also "Christophobia." Both need to be addressed by people of good will. Islam and Christianity (together with other faiths) can and must learn to live together in our world today. Religious persecution must stop. Our world is too small for anything else than for people of every faith to learn to coexist. 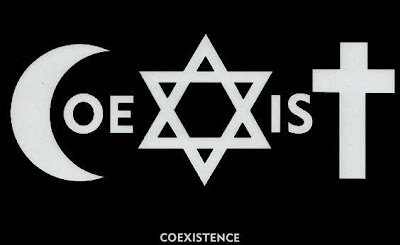