Global warming: Will my grandchildren have to pay for it? 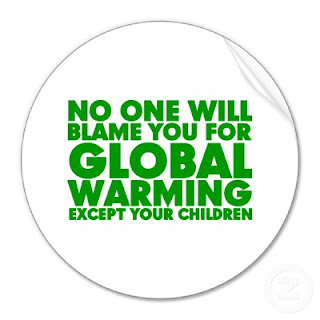 Will my grandchildren have to pay the price for global warming? Unfortunately, yes! They haven't asked me about global warming yet because they are still too young to understand. But this is what I would have to tell them: Sorry, Gracie, Christopher, and James, but global warming is real and someday you will have to pay for it. Eventually they will understand, but will they then blame all the generations before them, me included?

My grandchildren, who live in the Boston area, range in age from eight to three, thus they cannot be held responsible for global warming. That blame must be shared by many previous generations. Unfortunately, many people still disclaim any responsibility, since they attribute it to natural forces alone. There may be global warming, they admit. but humans have little to do with it. These people are clearly in denial and refuse to accept any liability. Yet their children and grandchildren will also have to pay the price, just as mine will. Someone always has to pay.

Let me be clear: global warming is not just an environmental problem it is also a human rights issue. It is in fact the greatest threat to children today, and not only to them but to all future generations. Now already the lives of  13 million people -- the majority of whom are children -- are threatened by the current drought in sub-Saharan Africa. 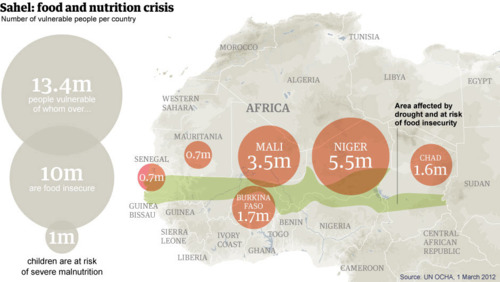 The Gambia is located just under where 0.7m is marked on this map

Currently I am living in the Gambia, which is part of the Sahel and is experiencing this drought as well. The crops have been disastrous and many people will need aid. The drought is much worse in countries further inland, as can be seen from the map.

Not all children in the Sahel will die, but many will suffer the effects of malnutrition, which can last a lifetime. For more on the situation in West Africa, see http://www.unicef.org.uk/Latest/News/West-Africa-update/.

President Obama, in his first address to the UN, acknowledged that we "risk consigning future generations to an irreversible catastrophe" if we fail to respond today. I just hope that we too are not too late in our response. The enormity of the crisis is becoming more apparent by the day.

Children will unquestionably suffer the most, and yet they are the least culpable for the damage caused by global warming. I call it global warming, because climate change is too neutral a term. There has always been climate change as a result of natural forces, but global warming is easier to understand and thus makes it easier to lay the blame where it belongs: with us. Of course, natural forces are also at work, but who can doubt any more that stupendous changes are taking place in the world that we share?

Toronto, which is my home base, has experienced the most unusual winter ever: hardly any snow fell during this period. Just before the end of winter the city experienced a heat wave that broke record after record. Many Canadians basked in this warmth, but other parts of the world were not as fortunate. I mentioned already the drought in the Sahel. Floods, however, have been experienced in parts of Asia and Australia.

Another effect has been the rise of the sea level through the melting of ice at the poles. In Antarctica ice shelves have started collapsing in recent years, consistent with the rapid warming trend there since 1945. If the polar ice cap continues melting at current rates, the  Arctic may be ice-free much sooner than we think. 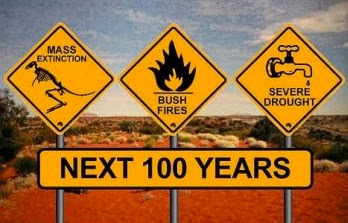 These facts are well known, even if not everyone is willing to acknowledge responsibility for the changes. But children will have to bear the brunt of them. Let me mention just a few that will effect future generations:
The underlying issue is intergenerational justice. The idea of ensuring justice between those generations who are responsible for the effects of global warming and those who will have to pay the heaviest price for it has is only beginning to be discussed at the national or international levels. 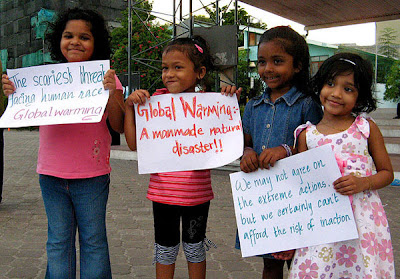 Intergenerational justice means that today’s youth and future generations must have the same opportunities to meet their own needs as the generation governing today. But this is not the case when we burden them with debts because we are unwilling to pay the price. We want to enjoy our SUV's and our steaks now, and we don't worry about the consequences.

The concept of intergenerational justice is not new, of course, having been used for decades in the contexts of economics, social policy and natural resource stewardship. But our responsibility to future generations has taken on new significance in the face of increasing evidence of global warming.

Unfortunately, the idea of intergenerational responsibility is not reflected thus far in policies or debate at the international, national or local level. Instead, the focus remains on the immediate costs of emissions reduction and of other climate-related harms, compared with the immediate benefits of a carbon-intensive economic growth model. Then we no longer see the forest for the trees.

There is much we can and must do to stop global warming; this is a step to intergenerational justice

Framing the debate this way not only ignores the rights of future generations but it also misses the future benefits of an early transition to a low-carbon economy, greater energy security, improved air quality and greater health and wellbeing.

A child-rights approach to global warming would not only take the concerns of intergenerational justice into account but also radically transform the policies and commitments of those in power. Those who are parents and grandparents have a responsibility to work with governments and civil society to shape such a response to climate change. In fact, all of us have this responsibility; we owe it to the world's children.

We know with certainty that global warming is real. It is caused largely by human activity and, with each passing day, it looms ever larger as a major threat to the existence of our human and natural environment. We also know with certainty that if left unabated, the consequences of climate change will be felt primarily by today’s children and the generations that follow them, especially if they are poor or otherwise without the capacity to protect themselves. 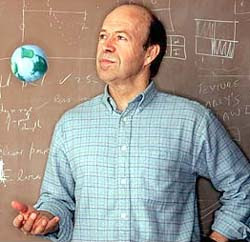 James Hansen, one the US's leading climate scientists and head of NASA’s Goddard Institute for Space Studies recently spoke to the French National Assembly, invoking the concept of intergenerational justice.

He concluded his address by saying,"It is my job, as a father and grandfather concerned about young people, future generations, and the other species that share our planet, to point out that the path the world is on, if we stay on it, guarantees that we will push the climate system beyond tipping points. This is a moral issue, a matter of intergenerational injustice. Because of the inertia and slow response of the climate system, our generation burns most of the fossil fuels and reaps the benefits while future generations bear the costs. We, the older generations and our governments, cannot pretend that we do not understand this situation -- we must accept responsibility" (emphasis mine).

I do feel responsible, but I am only one individual. I am very concerned for my grandchildren, however. I do not want them to have to pay for my sins and those of my generation, as well as those that went before me. But I know that my grandchildren will have to pay. Thus I must try to do what I can to minimize the cost. I plead with all who read this blog to do the same and ensure in whatever way we can that justice is done for all the children of the world. This is the only world we have, and we must share it equitably. 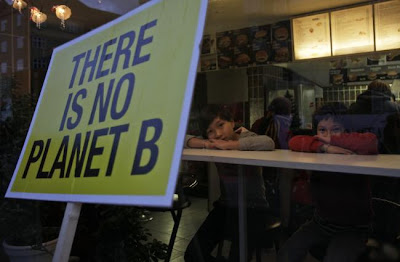