The Greatest Perversion of Justice Ever

This brief meditation came to me during the Good Friday service today at the Church of St. Mary Magdelene (Anglican), Toronto, as I was reading the first Scripture passage for the day, which I have included at the end. 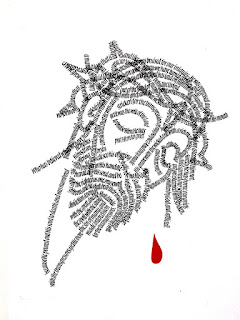 In the Isaiah passage that I have added at the end of this meditation, I have printed the words, "By a perversion of justice" in bold. This is post is more "religious" than most of my posts are, but today is Good Friday and, thus, I can hardly refrain from doing so at the highest point of the Christian church calendar: Holy Week, culminating in Good Friday and Easter.

The Hebrew words here, translated as "by oppression" and "by judicial sentence" can be taken together as a hendiadys, meaning an oppressive, unrighteous proceeding, but they can also be taken as denoting separate things: a preliminary confinement and then the sentence that followed a mock trial. I prefer the first, but in either case, there has been a perversion of justice.

All of us are familiar with perversions of justice; they take place every day. Those who are concerned with social justice see them on a daily basis. Yesterday, in Toronto, a narcisistic, misogynistic radio interviewer who was charged with sexual assault, was acquited after a six week trial. Many Canadians, myself included, were outraged by the verdict.

Yet this verdict pales in comparison with the injustices that people all over the world experience whether individually or as communities. Think of the Holocaust or other genocidal crimes where justice was never done properly, if at all.

Such suffering is common to many people. Russians, for example, pride themselves on their sufering. But not all suffering is the same. Even if it is not the result of personal mistakes, and thus truly due to an injustice that is inflicted by others, rarely is suffering redemptive in nature. 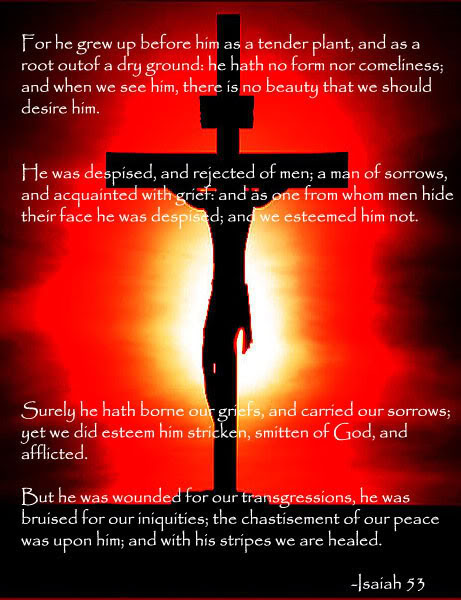 That is what struck me during the reading of the Isaiah passage which describes the Suffering Servant, whom the Christian Church has traditionally associated with Jesus Christ who died on a cross almost two thousand years ago.

Isaiah was a Jewish prophet who lived seven centuries before Christ and is presumed to be the author of the biblical book by the same name. Whether he was or not, is not the issue now. Nor do I want to pause and discuss the Jewish interpretation of Isaiah 53, although there is a general agreement that this passage refers to the Messiah. For Jews, however, Christ was not the Messiah.

For Christians, those who proudly bear the name of Christ, he is the Messiah. He is the Suffering Servant of Isaiah 53. He is the one who died on a cross as the result of a perversion of justice. He was convicted of crimes he never committed. In this respect, he is one of many people who have suffered unjustly for crimes they never committed. Many people have died through a perversion of justice.

In Christ's case, his death was redemptive. He died in order to save the world. Even those who never acknowlege his saving work are still affected by it, whether they realize this or not. The whole world is being restored as a result of what he did just outside Jerusalem almost two thousand years ago.

The "perversion of justice" that Christ experienced does mean that anyone is being blamed. for it. Both the Roman authorities and the Jewish leaders played a role in this drama which God planned in rder to save the world through Christ's sacrifice on the cross. 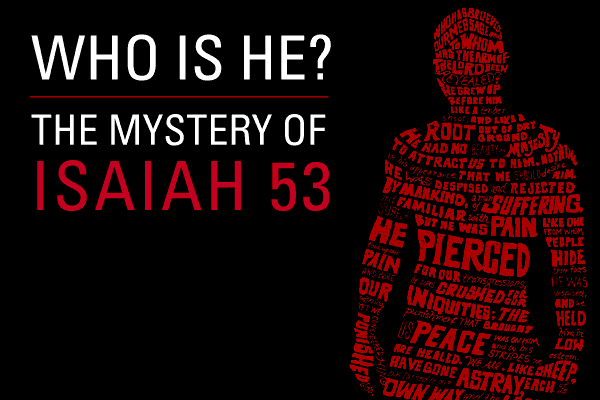 This drama was God's plan and no blame is involved, except a universal one, since all of us have sinned and therefore contributed to Christ's death. All of us must answer the question of who the Suffering Servant of Isaiah 53 is. For me, he is the Christ, the Messiah. He was the one who died as a result of a perversion of justice.

But this perversion was necessary so that the whole world could be saved. This perversion is redemptive. These were my thoughts as I read the Isaiah passage in church today. I hope that you appreciate this brief meditation. 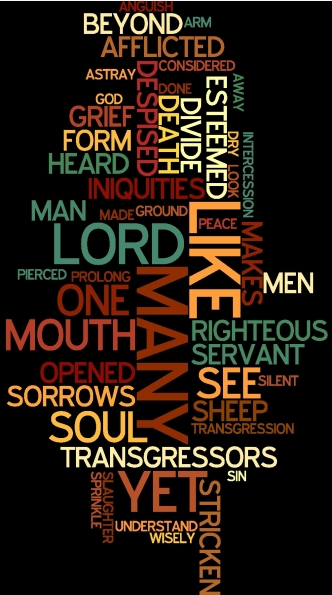 13 See, my servant shall prosper;    he shall be exalted and lifted up,    and shall be very high. 14 Just as there were many who were astonished at him    —so marred was his appearance, beyond human semblance,    and his form beyond that of mortals— 15 so he shall startle many nations;    kings shall shut their mouths because of him;for that which had not been told them they shall see,    and that which they had not heard they shall contemplate.1  Who has believed what we have heard?    And to whom has the arm of the Lord been revealed? 2 For he grew up before him like a young plant,    and like a root out of dry ground;he had no form or majesty that we should look at him,    nothing in his appearance that we should desire him. 3 He was despised and rejected by others;    a man of suffering and acquainted with infirmity;and as one from whom others hide their faces    he was despised, and we held him of no account.
4 Surely he has borne our infirmities    and carried our diseases;yet we accounted him stricken,    struck down by God, and afflicted. 5 But he was wounded for our transgressions,    crushed for our iniquities;upon him was the punishment that made us whole,    and by his bruises we are healed. 6 All we like sheep have gone astray;    we have all turned to our own way,and the Lord has laid on him    the iniquity of us all.
7 He was oppressed, and he was afflicted,    yet he did not open his mouth;like a lamb that is led to the slaughter,    and like a sheep that before its shearers is silent,    so he did not open his mouth. 8 By a perversion of justice he was taken away.    Who could have imagined his future?For he was cut off from the land of the living,    stricken for the transgression of my people. 9 They made his grave with the wicked    and his tomb[e] with the rich,although he had done no violence,    and there was no deceit in his mouth.
10 Yet it was the will of the Lord to crush him with pain.When you make his life an offering for sin,    he shall see his offspring, and shall prolong his days;through him the will of the Lord shall prosper. 11     Out of his anguish he shall see light;he shall find satisfaction through his knowledge.    The righteous one, my servant, shall make many righteous,    and he shall bear their iniquities. 12 Therefore I will allot him a portion with the great,    and he shall divide the spoil with the strong;because he poured out himself to death,
and was numbered with the transgressors;
yet he bore the sin of many,
and made intercession for the transgressors.