The faith of Muhammad Ali

I have taken another short leave from blogging. Occasionally, I have still posted something, but for the most part I refrained from regular postings -- a sort of fasting. This has nothing with Ramadan, which has just started, but it is motivated by the many other demands on my time at this time of year as well as a desire to recharge my spiritual batteries. I hope to return to more frequent postings after a short intermission. 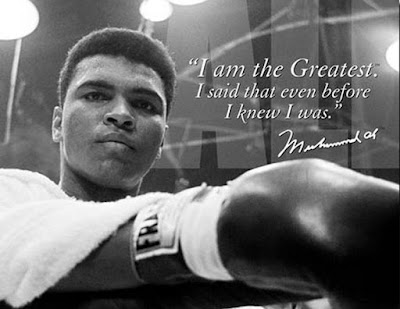 Muhammad Ali needs no further introduction. The media have been filled with articles about him. The day he died, TV and radio reports of his demise were almost non-stop. While not unexpected, his death, nevertheless, came as a shock. "The Greatest" was gone. "The Louisville Lip" had been silenced forever. This icon of many worlds had disappeared for good.

Many people will remember him for his boxing prowess. He has been rated variously as either the number one or two heavyweight boxer of all time. Others will cite his role in the civil rights movement. But for me, his faith has always piqued my interest.

Ali was born Cassius Marcelius Clay Jr. in 1942. His father was a Methodist who permitted his mother to raise him as a Baptist. At the age of twenty, he first came into contact with the Nation of Islam, although he was not admitted as a member immediately. When he was, it was publicized and he was renamed Muhammad Ali. He retained that name the rest of his life. 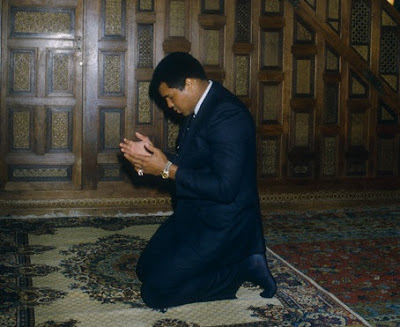 He remained a Muslim for the rest for the rest of his life as well. His new faith became important for him, much more important that his earlier faith was. That has much to do with the Nation of Islam and its beliefs. For Ali, Christianity was the religion of white people. His new new faith expressed that he was Black. "Cassius Clay is my slave name," he announced.

He explained: "I am America. I am the part you won't recognize. But get used to me. Black, confident, cocky; my name, not yours; my religion, not yours; my goals, my own; get used to me." These comments are a selfie of the man he had become after his conversion: a confident and cocky black man whose new religion accurately expressed him.

The Nation Of Islam (aka Black Muslims) has had a stormy past. Founded by Wallace D. Fard Muhammad in 1930, it has included Elijah Muhammad, Malcolm X, Warith Deen Mohammed, and Louis Farrakhan, among its leaders. The Nation of Islam was founded to "teach the downtrodden and defenseless Black people a thorough Knowledge of God and of themselves, and to put them on the road to Self-Independence with a superior culture and higher civilization than they had previously experienced."

From the beginning, the Nation of Islam was a political movement that preached black supremacy. Elijah Muhammad called for the establishment of a separate nation for black Americans and the adoption of a religion based on the worship of Allah and on the belief that blacks were his chosen people. Whites, and even some blacks, however, viewed it as a black separatist "hate religion" with a propensity toward violence. 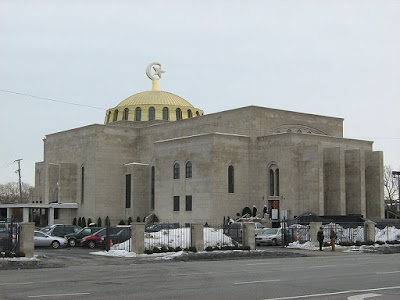 Ali used his influential voice to speak on behalf of the Nation of Islam. In a press conference he articulated his opposition to the Vietnam War: "My enemy is the white people, not the Vietcong." In relation to integration, he stated: "We who follow the teachings of Elijah Muhammad don't want to be forced to integrate. Integration is wrong. We don't want to live with the white man; that's all." And about inter-racial marriage, he said: "No intelligent black man or black woman in his or her right black mind wants white boys and white girls coming to their homes to marry their black sons and daughters."

By the mid-seventies, there was a movement to transition the Nation of Islam to mainstream Sunni Islam. Ali himself converted to Sunni Islam in 1975 and later to Sufism, leaving behind some of the stranger doctrines of the Nation of Islam, such as the Moon once being a part of the Earth, and the Earth is over 76 trillion years old.

Pointing to Islam, Ali declared himself a conscientious objector. He stated: "War is against the teachings of the Qur'an. I'm not trying to dodge the draft. We are not supposed to take part in no wars unless declared by Allah or The Messenger [Elijah Muhammad]. We don't take part in Christian wars or wars of any unbelievers." He famously stated: "Man, I ain't got no quarrel with them Viet Cong." He elaborated: "Why should they ask me to put on a uniform and go ten thousand miles from home and drop bombs and bullets on brown people in Vietnam while so-called Negro people in Louisville are treated like dogs and denied simple human rights?"

Ali's example inspired countless black Americans and many other Americans. Recalling Ali's anti-war position, Kareem Abdul-Jabbar said: "I remember the teachers at my high school didn't like Ali because he was so anti-establishment and he kind of thumbed his nose at authority and got away with it. The fact that he was proud to be a black man and that he had so much talent ... made some people think that he was dangerous. But for those very reasons I enjoyed him."

Ali also inspired Martin Luther King, Jr., who had been reluctant to address the Vietnam War for fear of alienating the Johnson Administration and its support of the civil rights agenda. Now, King began to voice his own opposition to the war for the first time.

Civil rights figures came to believe that Ali had an energizing effect on the freedom movement as a whole. Al Sharpton spoke of his bravery at a time when there was still widespread support for the Vietnam War:


For the heavyweight champion of the world, who had achieved the highest level of athletic celebrity, to put all of that on the line – the money, the ability to get endorsements – to sacrifice all of that for a cause, gave a whole sense of legitimacy to the movement and the causes with young people that nothing else could have done. Even those who were assassinated, certainly lost their lives, but they didn't voluntarily do that. He knew he was going to jail and did it anyway. That's another level of leadership and sacrifice. 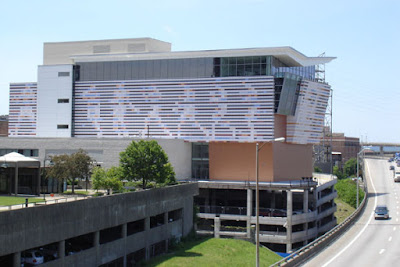 Ali being Ali, he may well have adopted his antiwar stance without converting to Islam, but Islam did help to shape his thinking about war and to make him even more resolved to use his fame to promote the cause of black Americans and to resistance to white domination.

In 1966, when Ali refused to be conscripted into the US military, he cited his religious beliefs and his opposition to American involvement in the Vietnam War. He was eventually arrested, found guilty of draft evasion charges and stripped of his boxing titles. The US Supreme Court overturned his conviction in 1971. His actions as a conscientious objector to the war made him an icon for the larger counterculture generation.

In spite of his prowess in the boxing ring and his struggle on behalf of the civil rights movement, there was one battle he did not win. Ali was unable to defeat the Parkinson's disease, first diagnosed in 1984, that eventually contributed to his death on June 3, 2016.

Ali's faith continued to shine forth in the many decades since his conversion when he fought not only racism but also Islamophobia. Both racism but also Islamophobia are alive and doing well today, if Donald Trump is an accurate indicator. Therefore the struggle against both is not over yet. Ali's personal struggle is over, but his legacy of fighting them will remain. Ali, RIP.