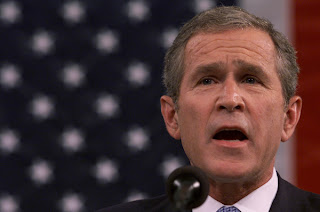 "Our war on terror begins with al-Qaeda, but it does not end there. It will not end until every terrorist group of global reach has been found, stopped and defeated … Every nation in every region now has a decision to make: Either you are with us, or you are with the terrorists … This is not, however, just America’s fight. And what is at stake is not just America’s freedom. This is the world’s fight. This is civilisation’s fight. This is the fight of all who believe in progress and pluralism, tolerance and freedom. We ask every nation to join us … An attack on one is an attack on all. The civilised world is rallying to America’s side." President George W. Bush setting the agenda for the "War on Terror" in an address to Congress, September 20, 2001. 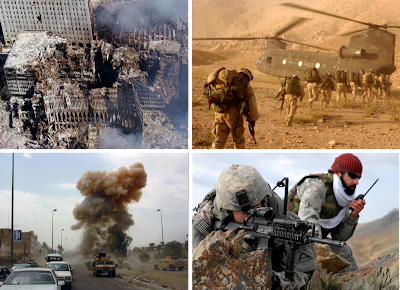 Probably the greatest legacy of 9/11 is the "War on Terror" (also known as the "Global War on Terror" or the "War on Terrorism"). My intention is not to provide a history of this war (or better a series of wars) but only to describe very briefly the impact it has made on many people around the world. Note: I will not use capitals for the war on terror in the rest of this post.
The world changed on 9/11, but not for the better. Peace has been the main casualty. The decade since has been marked by war and more war.
In a previous posting, I noted the impact of 9/11 on my travel plans, delaying my return to Moscow by five days. But this is minor in comparison with the impact 9/11 had on many other people. The war on terror increased that impact exponentially.
The 9/11 attacks killed 2,973 people, including Americans and foreign nationals but excluding the terrorists. About 303 times as many people have been killed in Afghanistan and Iraq than in those ghastly attacks.
More than 130 times as many people have been killed in these wars and occupations than in all terrorist attacks in the world from 1993-2004, according to data compiled by the US State Department.

More recent figures are unavailable. After the 2004 report showed terrorism at an all-time high, numerous experts suggested that the wars in Afghanistan and Iraq were fueling an increase in terrorism, and subsequent State Department terrorism tallies have remained classified.

The graph below estimates the total deaths worldwide, both military and civilian, as 224,475. These numbers will rise as long as the war on terror continues. So far, the end is not yet in sight. 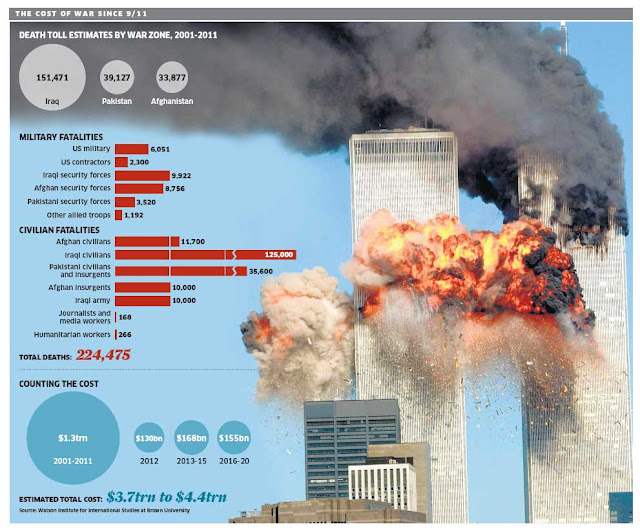 The cost of these wars since 2001 is approaching $1.3 trillion. This cost only includes the figures for the US; the cost to other countries is not listed here. The above graph gives a total cost of $3.7 trillion to $4.4 trillion for the US alone, which includes future military spending, and above all the cost of looking after veterans, disabled and otherwise.
Unlike most of America's previous conflicts, however, Iraq and Afghanistan have been financed almost entirely by borrowed money that sooner or later must be repaid. Unfortunately, the US is now broke. The war on terror has contributed to the recession that the world is suffering from.
Similarly, the Independent newspaper (30 June, 2011) wrote that the total cost to America of its wars in Iraq and Afghanistan, plus the related military operations in Pakistan, is set to exceed $4 trillion, which is more than three times the sum so far authorized by Congress in the decade since the 9/11 attacks.
At $4 trillion and counting, their combined cost is approaching that of the Second World War, put at some $4.1 trillion in today's prices by the Congressional Budget Office.
But there other less quantifiable costs as well. There are families throughout the world who have lost loved ones. Dreams have been shattered. Hopes have been dashed. Wives have been widowed and children bereft of one or both parents.
In addition, there are the broken lives of those who survived but are maimed either physically or mentally. Post-traumatic stress disorder or PTSD afflicts many military in the US and other countries because of the war on terror.
Nor should we forget about those who have died from malnutrition or lack of treatment. Not least, these wars may have created some 7.8 million refugees. The famine in the Horn of Africa should also be included in any final tally.
In the next post I will discuss how the US alienated Muslims all over the world through a perceived but undeclared war on Islam.
The Independent asks finally what America achieved by such outlays. It concludes that two brutal regimes, those of the Taliban and Saddam Hussein, have been overturned, while al Qaida, the terrorist group that carried out 9/11, by all accounts has been largely destroyed.
But, the article notes, in neither Iraq nor Afghanistan is democracy exactly flourishing, while the biggest winner from the Iraq war has been America's arch-foe Iran.
It is estimated that Osama bin Laden and his henchmen spent only $500,000 on organising the 9/11 attacks, which directly cost the US economy an estimated $50 billion to $100 billion
In 2003, President George W Bush proclaimed that the Iraq war would cost $50 billion to $60 billion. This figure is ironic when compared to the estimated direct cost of 9/11 to the US. Governments that go to war invariably underestimate the cost, but rarely on such an epic scale.
Moreover, the wars that flowed from 9/11 have been already the longest in US history, and the end is not yet in sight. Even after the US leaves Afghanistan (which may not happen for a while, since some troops will remain for training purposes), there are more than enough other trouble spots in the world to keep the American military busy for many years to come.
Thus it is not surprising that many Americans are reverting to isolationism, in reaction to the war on terror. The next decade will be different from the one immediately after 9/11.
This too is only part of the legacy of 9/11 and the war on terror. For a slightly tongue-in-cheek take on 9/11, I invite you to read this article: http://www.telegraph.co.uk/news/worldnews/september-11-attacks/8722638/21-awful-truths-about-911.html.
On a personal note. Over the years I have done a lot of travelling. I have visited about 60 countries. But since 9/11, the fun has gone out of it. Security procedures at airports have been tightened and then tightened some more. All bags are checked thoroughly and, sometimes, double checked. Full body scanners have now been introduced at major airports. What will the next step be? 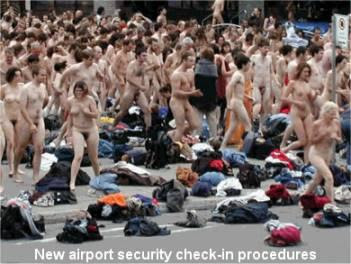 I used to be able to drive to the US with a minimum of delay at the border. Now I need a passport and can expect long line ups. Tourism has been affected. Today many Americans no longer travel to Canada since they do not have passports, while most Canadians do.
All of us, no doubt, have our own horror stories about crossing the border in both directions, whether by air, car, or boat. The US and Canada are supposed to be friends, but this friendship has been strained, though thankfully not broken, by the war on terror.
Many people living in communities near the border have been affected in a special way. The man in the photo (an American) was arrested after he had not reported buying a pizza on the Canadian side of the border in the twin towns of Derby Line, VT and Stanstead, Que. For years he had been able to use the back streets, but now he has to use Main Street and report to the US border service. 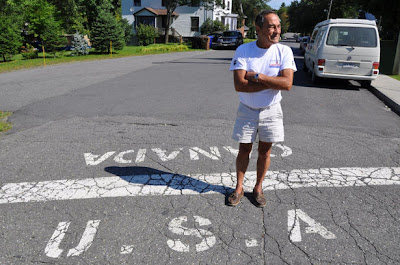 Yet all of these are only minor irritations when compared with what has happened to Muslims post 9/11. The war on terror has affected that faith more than any other. More on that next time.
The legacy of 9/11 is growing daily. The war on terror has morphed into a war on Islam.
Christians ought to be in the forefront of bringing faith, hope and love to a world torn apart by fear and hatred. Is the war on terror also part of our message? What can we do to counteract this negative legacy?
Please share your ideas.