Part of the text of Ephesians 2:12 about "being without God"

A few weeks ago I promised to write more about atheism. That is easier said than done, since atheism is difficult to define. Yet atheism is a dominating force that must be reckoned with in the contemporary world.

This post will be the last in a series on how several religions view their role in the public square. If atheism is a religion, as I have argued previously, then it too belongs in this series. And then we can ask legitimately how it sees its role.

That role is easier to describe than atheism itself. Atheism, since it sees itself as not being a religion, can claim to own the public square. Typically, atheism wants to exclude religion in general, and thus every faith, from that square. Yet today, paradoxically, religion is becoming more accepted in the public square, even while atheism seems to be growing in many countries all over the world.

Part of the problem in discussing atheism and religion is due to the difficulty of defining religion. As I wrote in an earlier post, I consider every person to be religious. In other words, everyone has a faith, even if that faith involves the absence of a belief in a god or gods. It is still a belief.

This is what Ninian Smart has done in what are commonly known as the Seven Dimensions of Religion, which is widely what accepted by anthropologists and researchers of religion as broadly covering the various aspects of religion, without focusing on things unique to any specific religion.

The characteristics Smart lists are quite different from the ones that atheists use. What Smart has done is not really provide a definition of religion but rather a method of describing it that avoids the problem of definition entirely.

The seven dimensions proposed by Smart are narrative, experiential, social, ethical, doctrinal, ritual and material. Not every religion has every dimension, nor are they all equally important within an individual religion.

Smart even argues that the "secularization" of western society is actually a shift of focus from the doctrinal and ritual to the experiential.

The more common understanding of atheism among atheists is "not believing in any gods." No further claims or denials are made. Someone who has never heard about a god would be an atheist in this sense.Then an atheist is a person who is not a theist. This viewpoint is often called "weak" or "implicit" atheism.

There is also a narrower conception of atheism called "strong" or "explicit" atheism. Here, an atheist explicitly denies the existence of any gods, which is a much stronger claim. Admittedly, this is an oversimplification that obscures some of the distinctions that atheists make. I cannot explain all these types of atheism now.

The following diagram, however, may help to illustrate these different types of atheism. 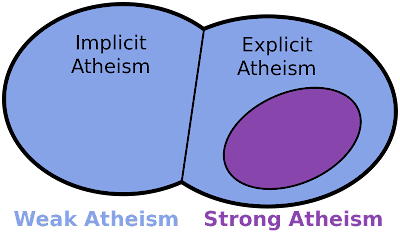 An Euler diagram showing the relationship between weak/strong atheism and


Agnosticism, in contrast, is the absence of a knowledge of gods. Although sometimes used metaphorically to denote a lack of commitment to a given issue, agnosticism strictly taken means not claiming to know for sure if any gods exist. As such, agnosticism is compatible at least with some religions, although agnostics, like atheists, deny that they are religious.

Agnosticism is thus not the same as atheism. Nor should agnosticism be confused with the doubts that every believer has at times about God and we experience him in our lives. Such doubts are normal, and should not cause us to doubt God's existence. We can and do know him, even when doubts arise.

Because of their exclusion of religion from the public square, both atheists and agnostics continue to claim that they are not religious. Yet, if one studies Smart's dimensions closely, atheists already have six of them and, strange as it may seem, are even beginning to develop the seventh, which is ritual.

The new atheism is the name given to the ideas promoted by sevral 21st-century writers who  advocate the view that religion should not be tolerated but should be countered, criticized, and exposed through rational arguments.

The new atheism is associated especially with people such as Richard Dawkins, Daniel Dennett, Sam Harris, and Christopher Hitchens. Some have argued that it is not new, but was propagated by big-name publishers. However, that overlooks the emphasis these writers lay on science.

In this regard, I can heartily recommend the comments that the scholar and churchman N.T. Wright makes on this type of atheism.

As I mentioned in an earlier post, a recent global poll (2012) reports that 59% of the world's population considers themselves religious, while 23% are non-religious, and 13% are atheists. Non-religious and atheists overlap, no doubt. The report also remarks that religiosity has declined 9% worldwide since 2005.

The data can be broken down more precisely for individual counties: the percentage of population in each country that consider themselves non-religious (2006) are given in the chart below. It should be noted that predominantly Muslim countries are hardly represented here, and those that are are at the bottom of the list.

Yet, as the Economist points out in an article on atheism in the Islamic world, atheists are becoming more outspoken in many Muslim countries, but they are not tolerated, which is hardly surprising. Apostasy is a major crime against God, and is punishable by death (at least for men), according to all four schools of Sunni Islamic law.

As the article notes, there are only a handful of majority-Muslim countries where atheists can live safely, as long as they do so quietly. Turkey is one example, Lebanon another. None of these countries makes atheism a specific crime, and none provides atheists with legal protection or recognition.

Indonesia, according to the article, demands that people declare themselves as one of six religions; atheism and agnosticism do not count. And Egypt’s draft constitution makes room for only three faiths: Christianity, Judaism and Islam. Atheism again does not count.

Atheism may not be the fastest growing religion in the world, but it is on the increase. In this post I can hardly begin to do justice to the topic of atheism. This is only a very brief introduction, yet I felt it was necessary if only to complete this series on the role of religion in the public square.

As I have noted in a previous post, atheists love to blame religion for much of the violence in the world, but they are equally guilty. No one is totally innocent when it comes to violence; thus we can disregard this claim, as well as many other claims made by atheists about religion and its public role.

Should we be worried about the growth of atheism? Not necessarily. But we must be aware of how vicious atheists can be when the topic of religion arises. In response, we must first of all inform ourselves of their arguments in order to be properly prepared to counter these arguments when the opportunity presents itself.

But our response must always be motivated by love for our adversaries, even when we disagree strongly with their stance. Let us keep that in mind in our dealings with atheists.