The end of poverty 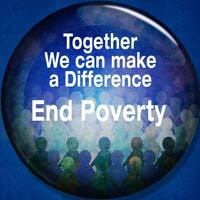 "The poor you will always have with you" (Matthew 26:11).  Can we use this text to justify the perpetuation of poverty?

The Economist recently published a series of articles that discuss the chance of taking a billion people out of extreme poverty by 2030. In 1990, 43% or 1.9 billion people in the developing world lived in extreme poverty. By 2010 that had been reduced to 21% or 1.2 billion. The authors then ask, if this percentage could be halved in two decades, why could it not be reduced to 1% by 2030? The following table illustrates this. 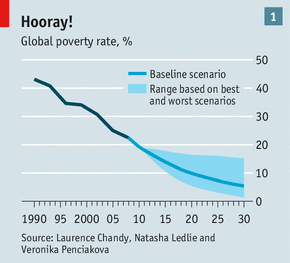 The president of the World Bank, Jim Yong Kim, proclaimed 2030 as "the global target to end poverty."
President Barack Obama had promised earlier this year that "the United States will join with our allies to eradicate extreme poverty in the next two decades."

How to define poverty has been debated for a long time, but here the poverty line is defined as subsisting on $1.25 a day, which is the average of the 25 poorest countries' own poverty lines, adjusted for differences in purchasing power. People below that level live lives that are poor, nasty, brutish and short. They lack not just education, health care, proper clothing and shelter but even enough food for physical and mental health.

In contrast, the US has set its poverty line at $11,490 per year for a one-person household, or about $30 a day. For a family of four the comparable figure is $63 a day. In middle-income countries the poverty line lies somewhere in between.

Notice the three curves in the following table. Even in 2030 there will still be people who live in extreme poverty, but their number will steadily decline and many more people will live above the poverty line. 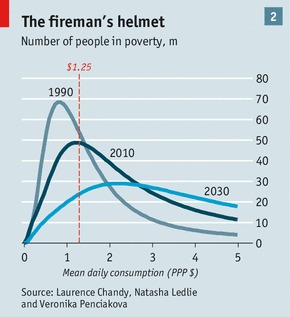 The Economist notes that almost all of the fall in the poverty rate should be attributed to economic growth. Fast-growing economies in the developing world have done most of the work. But how that growth is distributed also matters. In countries where income inequality is high, each percentage point of GDP growth will do less work than the same growth would in a more equal place.

That is indeed great news. But, as The Economist observes, taking the remaining billion people above the threshold will be a challenge. After China, the next country that should move millions of people across the line will be India. Then it will be the turn of sub-Saharan Africa, which will be especially difficult. At current growth rates, it is estimated that 25% of Africans will still have to subsist on $1.25 or less in 2030, as the next table shows.

There are two big ifs involved in reaching that goal set by the World Bank by 2030. One is steady economic growth and the other is an improvement in the equality index. But both of these assumptions are highly questionable. Unfortunately, continued growth may benefit the more affluent people in many countries most  rather than the poor because of growing inequality.

Figure: How many poor people? Scenarios for $1.25 poverty in 2030, millions of people

Thus it is not immediately apparent that the goal of ending poverty will be successful. The Economist sings the praises of capitalism in making this possible, at least potentially. Yet if poverty is to end, it will take more than capitalism to accomplish this. It will require the effort of many people in many different countries. 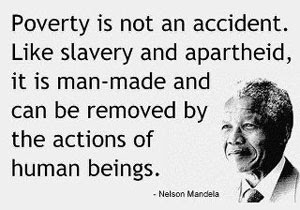 Poverty is not inevitable, in spite of how people tend to interpret the comment of Jesus, "The poor you will always have with you." His purpose in saying this was not to justify the perpetuation of poverty.

Jesus said this after a woman had anointed his feet with costly perfume. When his disciples noticed what she had done, he said that he would not always be with them, unlike the poor people of his day. It was merely a comparison, not a sociological observation.

When Jesus said this, he no doubt remembered the words of Deuteronomy 15:11, "There will always be poor people in the land." But that statement does not mean that people can ignore the needs of the poor. On the contrary, as the rest of this verse makes very clear: "Therefore I command you to be openhearted toward your brothers and toward the poor and needy in your land." 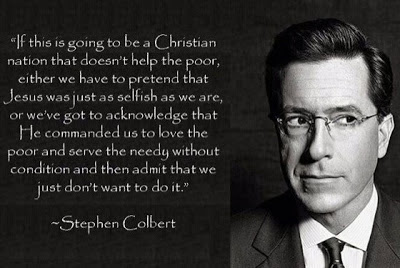 The context of this verse in Deuteronomy spells out how the poor should be provided for: every seven years their debts must be cancelled so that there would not be any poor people in the land. That did not include foreigners, but the debts of fellow Israelite had to be forgiven in order that "there be no poor among you" (Deuteronomy 15:4).

Today we should understand that to mean that all of us, secularists included, should be concerned for the poor anywhere in the world. They are our brothers and sisters, according to this biblical passage, God commands us to give generously to them, and then God, in turn, promises to bless us.

The eradication of poverty is possible, but I would add this caveat: only if the rich nations of the world provide substantial help to those nations that need such help the most. Help can take many forms, apart from direct aid. Debt forgiveness has often been suggested. The removal of trade barriers is another common suggestion. Reducing inequality is yet another proposal. There are many more, as the following figure shows. Step by step people can be raised out of poverty. 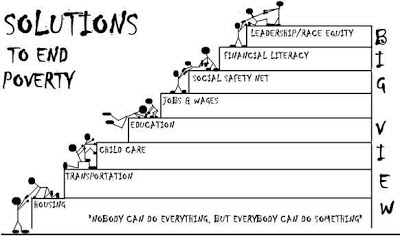 A combination of economic growth and falling inequality appears to be the optimum way of achieving the goal of eliminating poverty by 2030. Even then, there will still be poor people in many countries all over the globe, even the richest ones. But the number of people living in extreme poverty will have been reduced substantially.

I have personally witnessed the suffering of extremely poor people in the countries where I have lived and worked. I still cannot fathom how these people manage every day. Even today I am very concerned about them. That is why I am writing this post. I want to urge people to work together to end poverty. I want to urge you. Many people and nations are already involved. Poverty is not easily reduced, much less eradicated entirely. But it must be done. It can be done.

Sadly, some poor people will always be with us, but I sincerely pray that the numbers of very people may be diminished within the next few decades. Relative poverty will never be eradicated entirely, but the extreme poverty that too many people still suffer from today may eventually become history.

That is my prayer, and I hope it is yours as well.