Are Putin and Harper brothers?

This post is a personal commentary on two internationally renowned politicians that I dislike very much largely because of their authoritarian style and many negative character traits. What galls me above all is that they profess to be religious, but their faith seems to play little or no role in public. I delayed publication because of its personal nature. You may disagree with me, but this is my blog and my opinion. Are Putin and Harper brothers? I ask this question somewhat tongue in cheek. They are not brothers, of course, but they do share many character traits, some of which are very negative.

By Putin and Harper I mean Russian President Vladimir Putin (born 7 October 1952) and Canadian Prime Minister Stephen Harper (30 April 1959). Although they are about six and a half years apart in age, and thus were not separated at birth, as is sometimes jocularly suggested about two people, they do show many signs of being so similar that many occasionally wonder if these two politicians are related.

Why do I ask whether they are brothers? Just look at their characters. They show many of the same traits, although there are also differences that can be explained by growing up in different countries. For example, Putin speaks Russian and German, while Harper speaks English and French, although he is learning Spanish.

Most revealingly, Putin is richer than Harper. Putin is estimated to be worth about $70 billion, while Harper is worth only $5 million, but again that can be explained by the countries in which they live. Russia is a very corrupt country, which helps to explain how Putin has accumulated such wealth on an official annual salary of only $187,000. Clearly in Russia there are opportunities available that Harper does not enjoy. 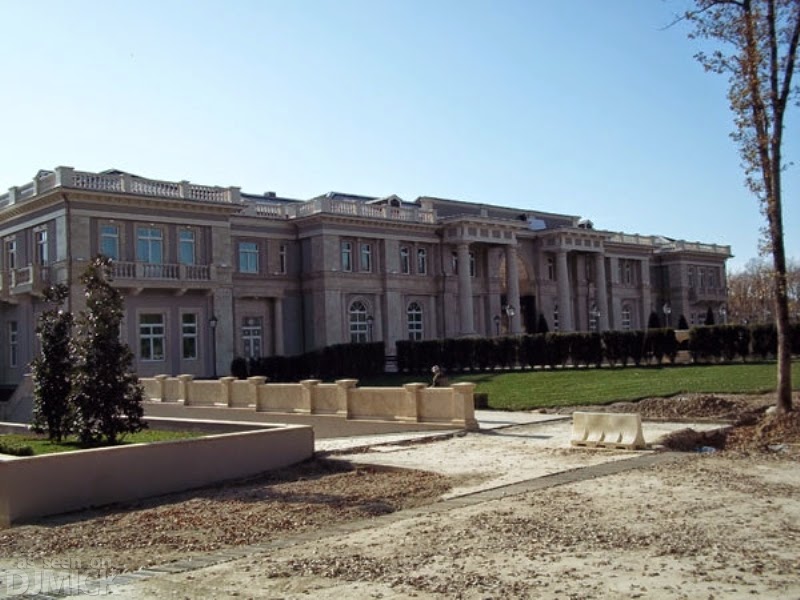 Putin's palace on the Black Sea

In addition, there are glaring differences in their foreign policies, particularly on the Middle East and Ukraine. Harper has just imposed new sanctions on Russia in the aftermath of MH17. Yet differences are not unusual among siblings. Thus these can be discounted.

The similarities between the two men are astounding. Both show so many similar traits that I have wondered more than once whether they are related. I am not alone in asking this question. Others have too.

Let's begin the comparison with something simple and not very surprising: Putin and Harper both love sports. That is not unusual; many men do. But these two are passionate about sports.

Putin is often photographed bare-chested, riding on a horse, fishing or whatever. He loves football; this year he attended the final of the World Cup between Germany and Argentina. He likes to present a macho image, especially when he is in public.

Harper, in contrast, is not as much into active sports -- he describes himself as studious and non-athletic -- but he did find time from his day job as prime minister to write a book called "A Great Game," a history of Canada's first hockey teams. In a country that is crazy about hockey this is politically astute. 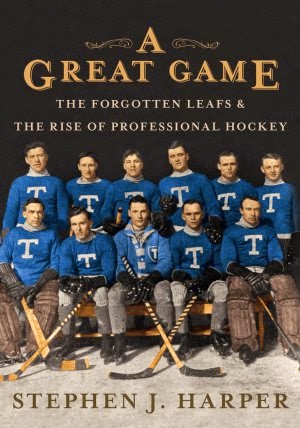 Both men are consummate politicians. They know what they have to say and do to stay in power. Putin and Harper both have an agenda, and molding their respective countries according to their own visions.

But both have displayed strong anti-democratic tendencies. Putin has displayed his disdain for democracy frequently. This was most evident when he invaded Ukraine and seized Crimea, using the pretense of a referendum to do so. In Russia, there is no real democracy, as many Russians will admit. They have always preferred strong men to leaders. Putin is just the latest in a long series.

During his term in office Harper has revealed his contempt for democracy on many occasions. Perhaps the most glaring recent example is the totally misnamed Fair Elections Act, which makes it much more difficult for some people (read immigrants and others who would not vote for him anyway) to cast a ballot, but it favors the Conservative party when it comes to funding. Harper is not simply partisan but undemocratic. Among other things, he has fired scientists and shut down parliament in order to get his own way.

Putin has frequently trampled on the human rights of Russians. In Russia defenders of human rights are regularly attacked. Opposition leaders and journalists were murdered. The judicial system is manipulated and Russian police have falsely arrested, tortured and raped hundreds of individuals. Also, Putin has no respect for women. Now Russian rebels in Ukraine have been accused of violating human rights.

Last year.Harper did not attend an APEC meeting in Sri Lanka, because of the human rights abuses in that country. While this make him sound like a defender of human rights, it is apparent that for him international trade trumps these rights. In addition, his government has refused to ratify many international agreements on human rights and, at home, has eroded human rights for First Nations and refugees. He too, it is clear, has no respect for women.

Both men are apparently very loyal to their friends and supporters, but both can also be extremely vindictive when people turn against them or are no longer useful. This negative trait is common among many politicians, Obama is sometimes cited as an example, but Putin and Harper carry vindictiveness to a new level. 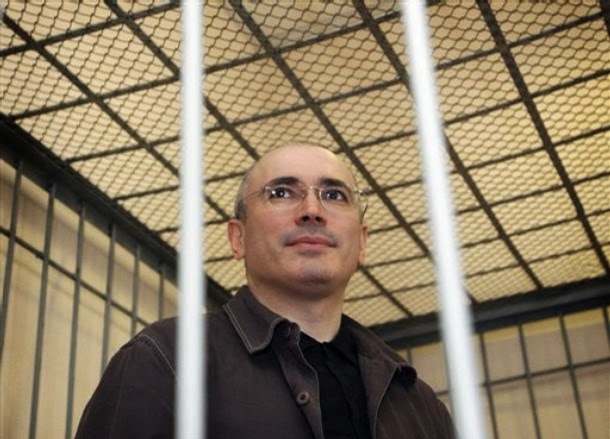 Mikhail Khodorkovsky behind bars in a Russian courtroom

Putin destroyed, Mikhail Khodorkovsky, who ran afoul of Putin by refusing to stay out of politics. Putin had ordered the oil giant dismembered and sold off and put Khodorkovsky, who was the owner of Yukos, on trial. Khodorkovsky is Jewish, but this is not why he was charged and condemned by the court. His crime was political: he had crossed Putin. Now Putin is getting his reward. The Permanent Court of Arbitration in the Hague, Netherlands recently ordered Russia to pay $50 billion to former shareholders of Yukos.

Harper has been known to push even his friends "under the bus" when they become liabilities to him. Nigel Wright, who was Harper's Chief of Staff until Wright wrote a check for $90,000 to allow Senator Mike Duffy to repay some expenses, is an example. Harper is infamous for his take-no-prisoner style. While not as ruthless as Putin, Harper's ruthlessness reveals a rather unsavory side to his character.

Putin is now divorced, which is not surprising in view of his machismo and ruthlessness. Harper is supposedly happily married, but there have been rumors that Harper's wife, Laureen Harper, had an affair with a female RCMP officer. Both men are the top politicians in their respective countries and thus may have neglected their wives with the resulting strain on their marriages.


Both men seem to be religious. Putin is a member of the Russian Orthodox Church. Harper is a member of the Christian and Missionary Alliance denomination. Yet religion does not seem to play a noticeable role in their domestic and foreign policy decisions, which is again not surprising, since many world leaders tend to go through the formalities of their faith but do not evidence it openly in their policies and public statements.

Why am I so critical of Putin and Harper? In part, because I have witnessed both men at work for many years: Putin while I was a resident of Moscow in the early period of his presidency, and Harper after my return to Canada after many years of living abroad. In neither case did I like what I saw. Both men practiced deceit and abuse of power. And both men have displayed contempt for ordinary people. 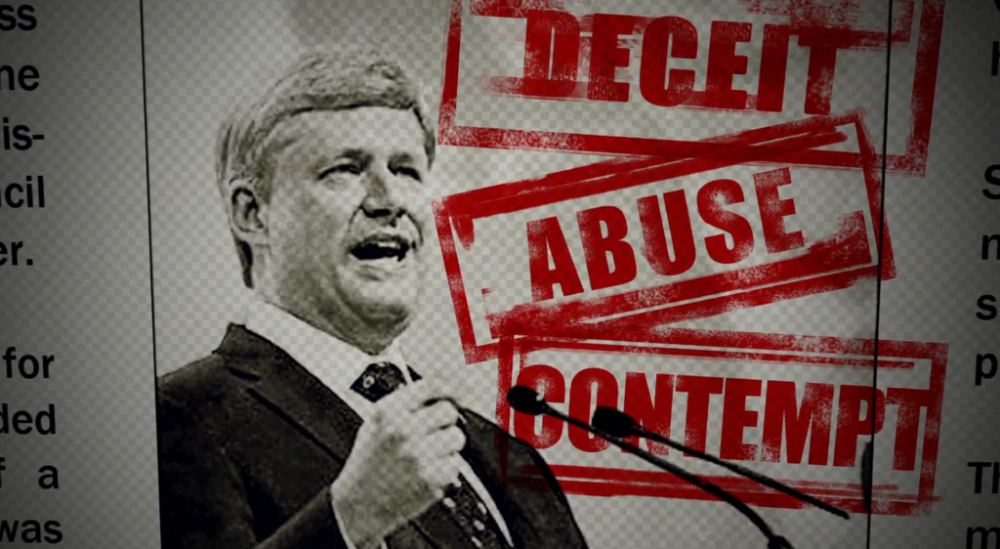 Putin came to power as the typical strongman that Russians have such a predilection for. If anything, he has grown more ruthless since he first came to power. The charade, whereby he traded offices temporarily with Dmitry Medvedev, which allowed Putin to remain president, was in order to circumvent the term of office limit set for the presidency in the Russian Constitution. One day, I surmise, Putin may find a way to become president-for-life, just as many presidents in Africa have already done.

During that time Putin has molded Russia in his image. If his popularity figures are an accurate measurement, many Russians like his vision of Russia. After the annexation of Crimea, these figures shot up. Even the MH17 fiasco did not dent his popularity, which is hardly surprising. Most Russians are poorly informed about what is really happened, thus they back the Kremlin's versions (of which there are several).

Harper has been prime minister since 2006. Theoretically he can remain in that office as long as his party remains in power, but I hope that does not happen. He too has shaped Canada in his image. Unfortunately, it is not an image that I share. Harper's Canada is the antithesis of mine. This is why I will never vote for him nor his party. The most recent polls show his support dropping throughout Canada, except in Saskatchewan and Alberta, where his core support is situated. He may yet lose the next election, scheduled for 2015.

This post is one way of protesting what Putin and Harper have done. Even though they are not brothers, they share many negative traits that appeal to a segment of the population in their respective countries. But their authoritarian nature turns me off. I prefer a very different leadership style. Politicians should serve the people of their country, not the other way around.

Putin and Harper are not brothers, but they are very similar in many ways. In Canada, Harper's days may be numbered. That is my fervent prayer. I intend to vote accordingly. In contrast, Putin may remain in power for a long time yet. Russians will determine their own fate. I do not like either of these two men and I wish they would disappear from the political scene.