Why Bill C-51 Should Be Defeated 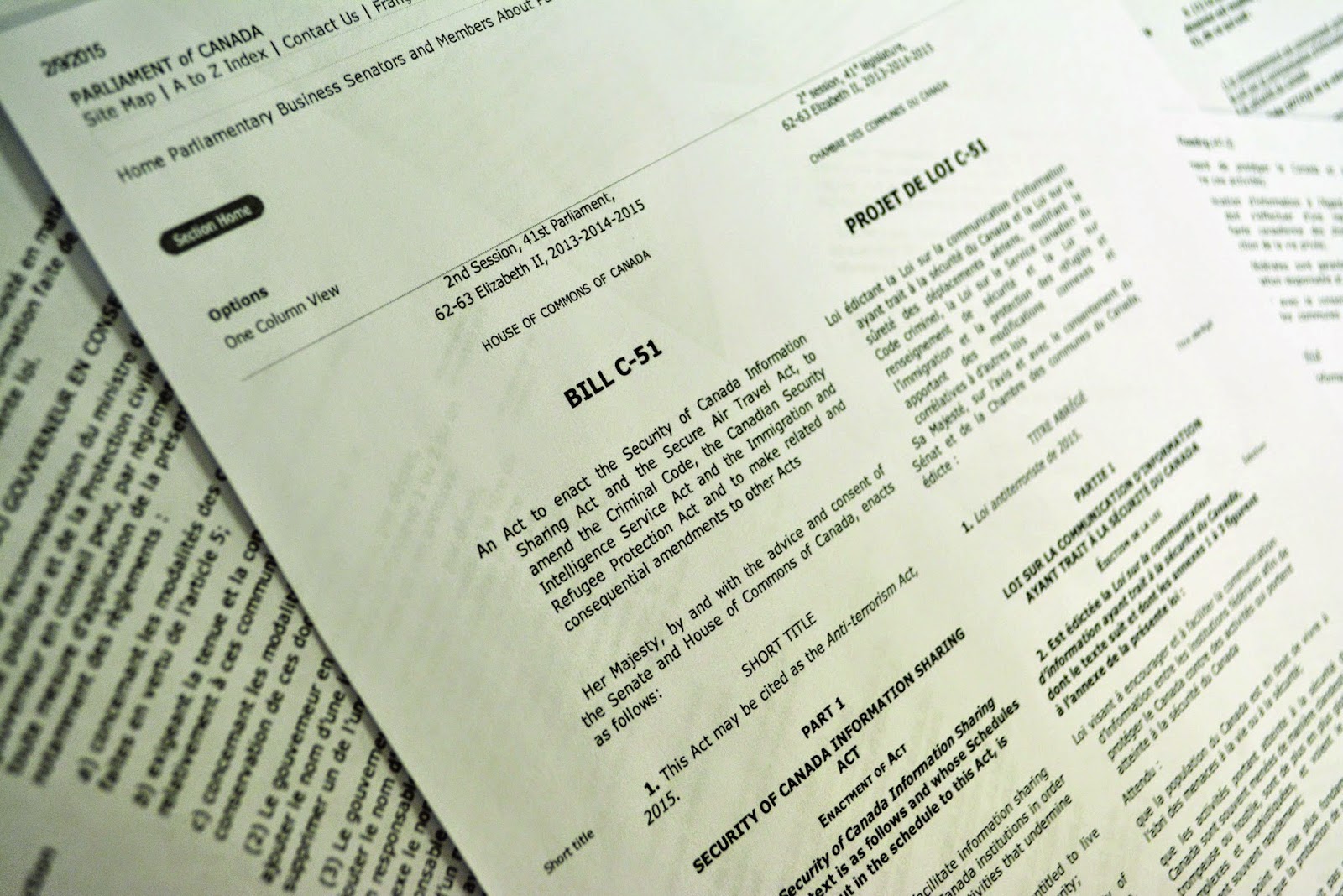 Let me assert my firm belief that the only thing we have to fear is fear itself -- nameless, unreasoning, unjustified terror which paralyzes needed efforts to convert retreat into advance. In every dark hour of our national life a leadership of frankness and vigor has met with that understanding and support of the people themselves which is essential to victory.-- Franklin Delano Roosevelt

Here is the low down on Bill-51, a dangerous bill that ought to be defeated, but instead will be passed, and also the politics behind it. I am against it, and invite everyone to protest it before it become a criminal act to do so. Soon we can all be labelled terrorists if we disagree with government policies.

Q What is Bill C-51?
A.Bill C-51, also known as the Anti-terrorism Act, 2015, is described officially as:"An Act to enact the Security of Canada Information Sharing Act and the Secure Air Travel Act, to amend the Criminal Code, the Canadian Security Intelligence Service Act and the Immigration and Refugee Protection Act and to make related and consequential amendments to other Acts."

Bill C-51 is intended to create more security for Canadians by, among other things, granting almost unlimited powers to CSIS, the Canadian spy agency. It explicitly gives CSIS the right to contravene both the law and the Constitution’s Charter of Rights and Freedoms. It has also been called "secret police" act.

Whether this bill will achieve the objective of providing greater security, and at what cost are issues that need to be discussed, but will  largely be disregarded, especially in an election year. 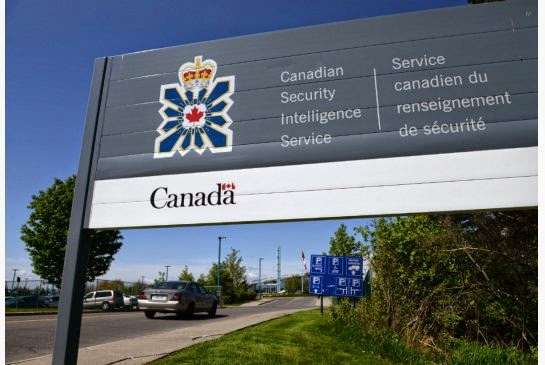 Q Why is this bill being introduced now?
A After the attacks in Quebec and Ottawa, where two soldiers were killed, in the latter case by a supposed terrorist who also entered the Parliament building, the government argued that the security of Canadians is being threatened.

We are at war and face a massive terrorist threat, according to Prime Minister Stephen Harper. He is playing the fear card in the lead up to this year's election. Unfortunately, many voters are susceptible to this fear mongering as polls have shown.

The problem is that we are not at war, except in Iraq, where our current commitment to fighting ISIS is leading to mission gallop and the introduction of ground troops by Canada. But even that will not threaten Canadians at home.

Acts of terrorism can be a threat, but existing anti-terror laws already suffice. Bill C-51 is therefore unnecessary. Expanded powers for CSIS will only further erode the rights of Canadians under the Charter, making it very dangerous. 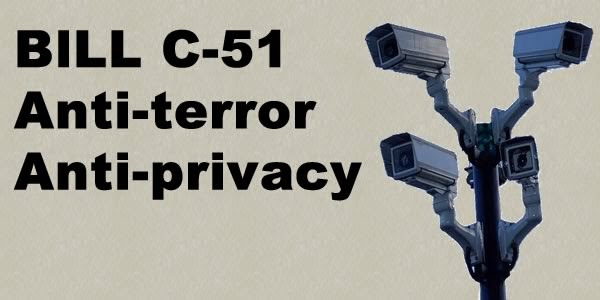 Q How will this bill further erode Charter rights?
A Bill C-51 will make it an offence to advocate or promote "the commission of terrorism offences in general." The Criminal Code definition of "terrorism" (Section 83.1) refers to acts that are already illegal, but are committed for "a political, religious or ideological purpose, objective or cause."

The bill attacks the civil rights of all Canadians, and places the protections guaranteed by the Charter under the shadow of wider powers to interfere with lawful and legitimate conduct. It expands the definition of threats to national security and add to the powers of the Canadian Security Intelligence Service.

This bill would allow a judge to impose up to a year of house arrest on someone who has neither been convicted nor charged with any crime. The judge could also require that the target wear an electronic bracelet. The only requirement in the bill is that police produce satisfactory evidence this person “may” commit a terrorist offence.

In Canada, it’s already a crime to plan or support terrorist activity. And the police already possess legal methods to disrupt planned terror attacks. But the new law will extend the powers of CSIS further than that.

In addition to these broad new powers, what does “terrorism in general” mean? It can mean anything the government wants it to mean. Under the new law people, can be detained for suspicion, even if they have not committed a crime.

Will it criminalize speech by making it illegal to promote "terrorism."? According to Harper, promoting terrorism will become a criminal offence for anyone, regardless of age.

Look at France, where an eight-year-old schoolboy was arrested because he told his teacher that the terrorists were right. Will the same thing happen in Canada? 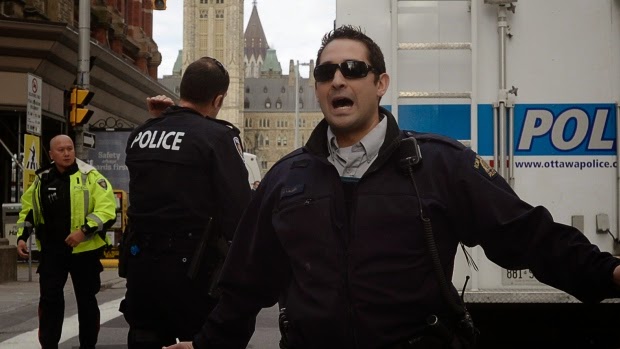 Q.What should be done with Bill C-5?
A This bill should be rejected. But since the Conservatives have a majority in the House of Commons and the Liberals have already agreed to support it, it will easily pass.

The only hope for those who are opposed to Bill C-5 is to amend it. Here are some amendments that have been suggested,, and that I have modifies and supplement:

--Include strong safeguards for Canadians, including a dedicated, high-level Parliamentary committee to oversee our spy agencies. The committee that is tasked with providing oversight over CSIS has not only experienced delays in getting any necessary information but has also been lied to by CSIS. This is not a good omen for the future.

--Strip out the attacks on civil liberties, including the sweeping expansion of spy powers, criminalization of speech, and preventative arrest for those who have committed no crime. Who gets to decide when a supposed crime has been committed?  And how can we trust these people to make such decisions without proper oversight?

--Clarify the vague parts of the bill, to be certain it will only be used to target people who pose a violent threat to the lives and physical security of people. Again, without proper oversight, who can protect those who have been arbitrarily arrested, or maybe picked on because of their ethnicity or other identifying characterization?

--Add a sunset clause that would cause the laws it proposes to expire automatically unless they were resubmitted and passed again. Otherwise, Canada would have legislation similar to the infamous War Measures Act that was first enacted in 1914 and not repealed until 1988. This act suspended the civil rights and personal freedoms of both Canadians and non-Canadians, and was used during WWI and WWII, as well as the 1970 October Crisis. Never again! 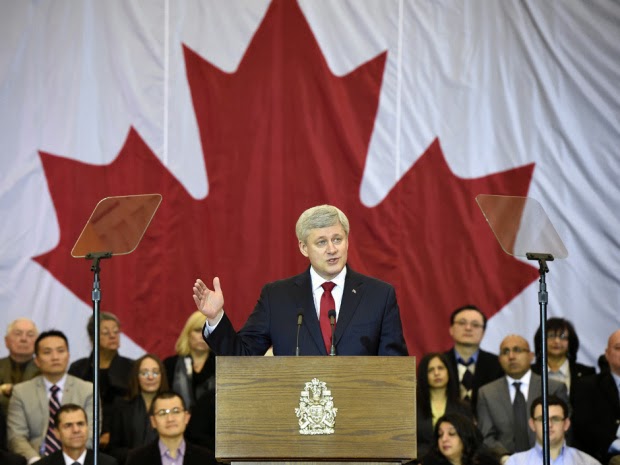 Bill C-51 is a dangerous bill that needs to be defeated, but will probably pass with only a few minor amendments.  However, amendments are not enough. This bill should either be withdrawn or defeated. Since neither are likely, all Canadians must seek to defeat the current government and thus assure that this bill is removed by the next government.

Harper has admitted that the proposed measures would probably not have prevented the killings of the two soldiers in October. If that is the case, why is he pressing for this bill if not to use it as wedge issue in the upcoming election? The Conservatives may win through the fear that it capitalizes on, while the opposition parties do not want to seem weak and unwilling to fight terrorism. Only the NDP will probably introduce any amendments.

The Conservatives will use Bill C-51 in order to win re-election. This may yet become the main plank of their election platform. And Harper will continue to play the "terrorist" card in order to frighten people, but Canadians must be determined to say, "Enough is enough!" and kick him and his party out of office.