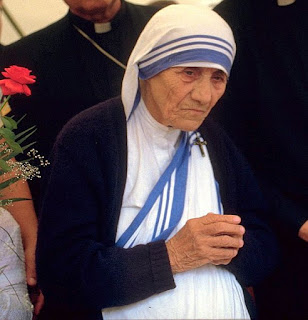 Mother Theresa was canonized by Pope Francis at a ceremony attended by tens of thousands of people on 4 September 2016 in St. Peter's Square in Vatican City. About 1,500 homeless people from all over Italy attended. The ceremony was also streamed online on the Vatican channel. She is now officially known as Saint Teresa of Calcutta.

In the Catholic Church,the title "Saint" denotes a person who has been formally canonized, that is, officially and authoritatively declared a saint, by the Church and is therefore believed to be in heaven, A "saint" is anyone in heaven, whether recognized on earth or not. The Catholic Church teaches that it does not "make" or "create" saints, but rather recognizes them upon proof of their "holiness" or likeness to God

Formal canonization is a lengthy process, often of many years or even centuries, The first stage in this process is an investigation of the candidate's life by an expert. After this, the official report on the candidate is submitted to the bishop of the pertinent diocese and more study is undertaken. The information is then sent to the Congregation for the Causes of Saints of the Holy See for evaluation at the level of the universal Church.

If the application is approved, the candidate may be granted the title "Venerable". Further investigation may lead to the candidate's beatification with the title "Blessed". Next, and at a minimum, proof of two important miracles obtained from God through the intercession of the candidate are required for formal canonization as a saint. These miracles must be posthumous.

Finally, after all of these procedures are complete, the Pope may canonize the candidate as a saint for veneration by the universal Church. For Mother Theresa all these steps, including the two miracles, were fulfilled, and thus she was canonized. 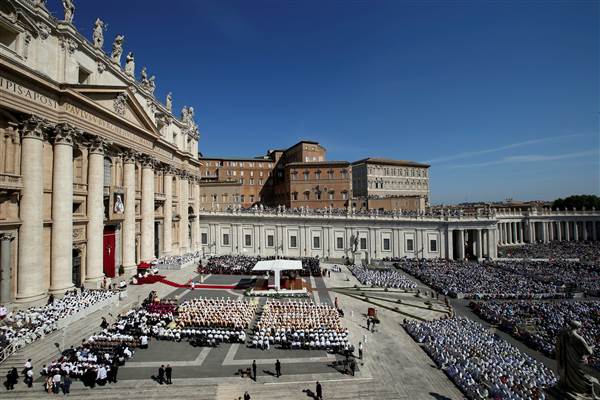 Canonization of Saint Theresa of Calcuta on 4 September 2016 in St. Peter's Square

Mother Teresa was born Agnes Gonxha Bojaxhiu in Skopje, Macedonia, on 26 August 1910. Her family was of Albanian descent. At the age of twelve, she felt strongly the call of God. She knew she had to be a missionary to spread the love of Christ. At the age of eighteen she left her parental home in Skopje and joined the Sisters of Loreto, an Irish community of nuns with missions in India. After a few months' training in Dublin she was sent to India, where on 24 May 1931 she took her initial vows as a nun.

The suffering and poverty she glimpsed in Calcutta made such a deep impression on her that in 1948 she received permission from her superiors to leave the convent school and devote herself to working among the poorest of the poor in the slums there.

On 7 October 1950, Mother Teresa received permission from the Holy See to start her own order, The Missionaries of Charity, whose primary task was to love and care for those persons nobody was prepared to look after. In 1965, the Society became an International Religious Family by a decree of Pope Paul VI.

The Society of Missionaries has spread all over the world, including the former Soviet Union and Eastern European countries. They provide effective help to the poorest of the poor in a number of countries in Asia, Africa, and Latin America, and they undertake relief work in the wake of natural catastrophes such as floods, epidemics, and famine, and for refugees.

Mother Teresa's work has been recognized and acclaimed throughout the world. She has received numerous  awards and distinctions, including the Pope John XXIII Peace Prize and the Nehru Prize for her promotion of international peace and understanding. She also received the Balzan Prize and the Templeton and Magsaysay awards. 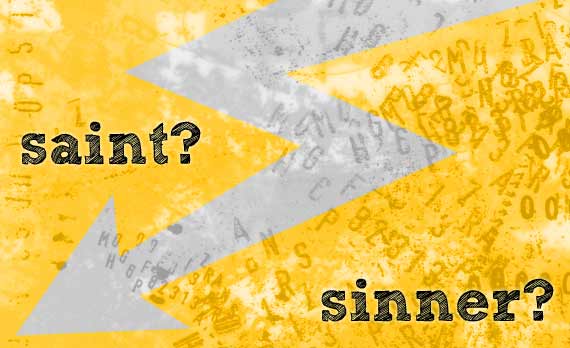 In 1979, Mother Teresa was awarded the Nobel Peace Prize, "for work undertaken in the struggle to overcome poverty and distress, which also constitutes a threat to peace." She refused the conventional ceremonial banquet given to laureates, and asked that the $192,000 funds be given instead to the poor in India, that earthly rewards were important only if they helped her help the world's needy.

When Mother Teresa received the prize, she was asked, "What can we do to promote world peace?" She answered "Go home and love your family." Building on this theme in her Nobel Lecture, she said: "Around the world, not only in the poor countries, but I found the poverty of the West so much more difficult to remove."
Mother Teresa died on 5 September 1997.  The Holy See then began the process that would lead towards canonization. Her postulator, the person who guides a cause for beatification or canonization through the judicial processes, has said, "We didn’t have to prove that she was perfect or never made a mistake.," but he did have to prove that Teresa was of heroic virtue.

A saint is still a sinner,  as Martin Luther affirmed when he penned the famous Latin phrase: "Simul Iustus et Peccator." By this he meant that while a Christian is legally declared to be righteous in the sight of God on the basis of Christ’s perfect work, they will continue to commit sin in this life. Until they are glorified, Christians are both saints and sinners. 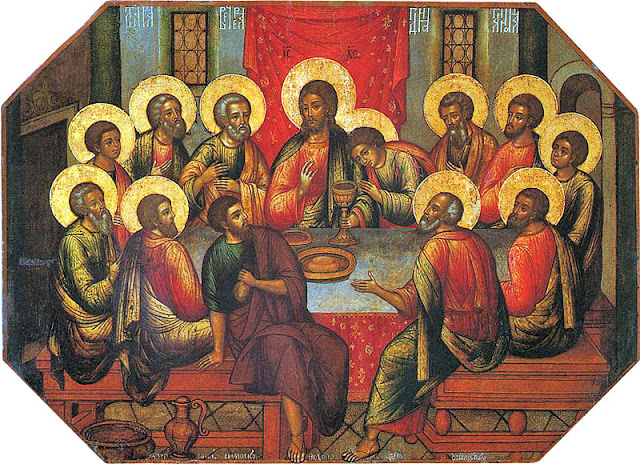 In traditional Christian iconography, saints are often depicted with halos, a symbol of holiness; note how Judas Iscariot at the forefront is the only apostle without a halo.

The same is true of Mother (now Saint) Teresa. According to some of her critics, her clinics have  received millions of dollars in donations, yet their conditions were criticized for a shortage of medical care, systematic diagnosis, and necessary nutrition. They charged that "Mother Teresa believed the sick must suffer like Christ on the cross."

One of Teresa's most outspoken critics was Christopher Hitchens, who wrote in a 2003 article, "This returns us to the medieval corruption of the church, which sold indulgences to the rich while preaching hellfire and continence to the poor. [Mother Teresa] was not a friend of the poor. She was a friend of poverty. She said that suffering was a gift from God. She spent her life opposing the only known cure for poverty, which is the empowerment of women and the emancipation of them from a livestock version of compulsory reproduction." He has also accused her of accepting contributions from dictators.

Mother Teresa experienced doubts and struggles over her religious beliefs which lasted nearly 50 years until the end of her life, during which "she felt no presence of God whatsoever, neither in her heart or in the Eucharist."

Her postulator reported that Mother Teresa expressed grave doubts about God's existence and pain over her lack of faith: "Where is my faith? Even deep down ... there is nothing but emptiness and darkness ... If there be God—please forgive me. When I try to raise my thoughts to Heaven, there is such convicting emptiness that those very thoughts return like sharp knives and hurt my very soul."

He thought that some might misinterpret her meaning, but for him her faith that God was working through her remained undiminished, and that while she pined for the lost sentiment of closeness with God, she did not question his existence. He compared her comments to the 16th-century mystic St. John of the Cross, who coined the term the "Dark Night of the Soul." According to him, other saints have had similar experiences of spiritual dryness, . 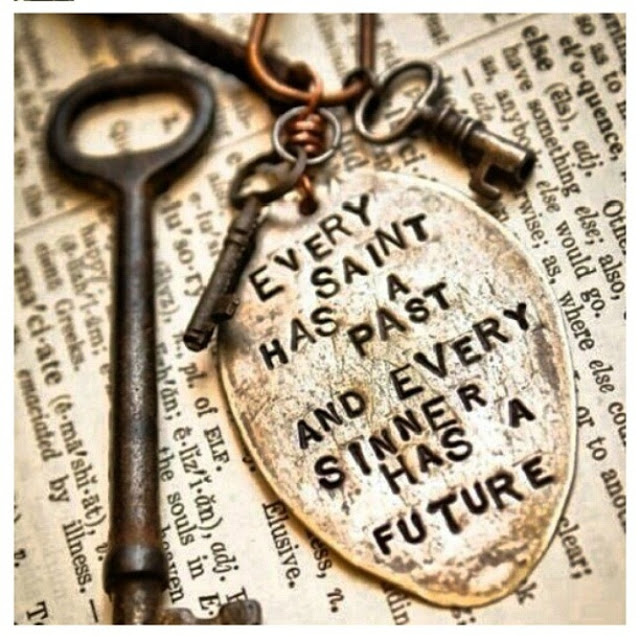 That believers are both saints and sinners, as acknowledged by Luther, is widely affirmed in most Christian denominations. Protestants typically use the word "saint" to refer to anyone who is a Christian. This is similar to how the Apostle Paul in his letters addresses the recipients as "saints" or holy people.

All Christians need to be aware that they are at the same time both saints and sinners. That knowledge keeps them humble and consciously dependent upon God’s grace. If they refuse to identify themselves as sinners as well as saints, they risk the danger of deceiving themselves about their sins. That is part of the paradox of the Christian life.

Someone who fails to see this is likely to end up blind to their sins and embrace a form of self-righteousness, but they may also tragically break down in a state of spiritual depression when the presence of sin in their life becomes apparent despite their best efforts to live the Christian life.

For whatever reason, Mother Therese experienced depression much of her life. Yet she lived an amazing and productive life. "Simul Iustus et Peccator" is what she experienced in a very personal way. She is both saint and sinner, as are all Christians.