Is America addicted to war? 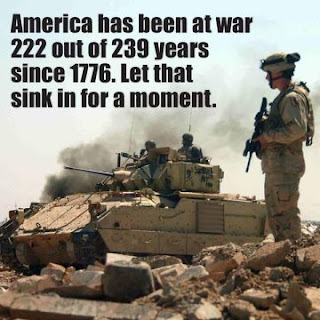 Only rarely in its history has the United States of America not fought a war, and sometimes more than one at the same time. America was born in war and seemingly that has become its legacy. No wonder that many are asking the question: Is America addicted to war?

Graph 1 and 2 record all the wars the U.S. has been involved in from the American Revolution to the present. Look closely at the two graphs and it is readily apparent that there have been very few years when the U.S. has not been at war. It is remarkable that the U.S. has not become sick of war, but the explanation lies in part in its violent birth. Revolution breeds further revolution.

If we examine only the 12 major wars that the U.S. has fought, there is already enough evidence to prove this addiction. I cannot think of any other country that has been involved in so many wars for so long during its relatively short history. There cannot be any doubt that the U.S. is addicted to war. 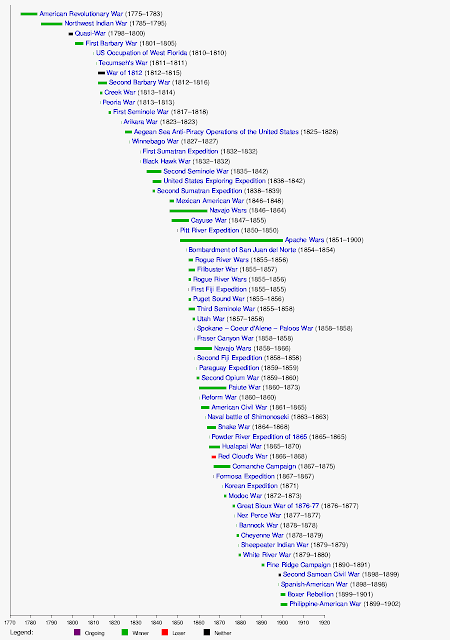 The twelve wars in chronological order are (with the size of American involvement, death, and the reason for the war): 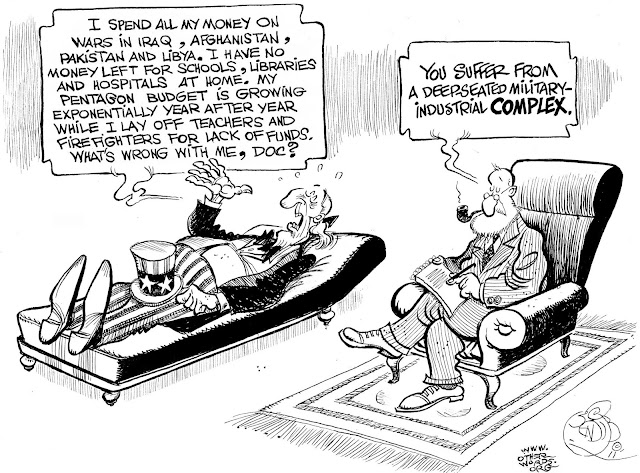 12. Iraq War (2003). Cause: Saddam Hussein’s alleged possession of illegal weapons of mass destruction and Iraq’s suspected ties to terrorism prompted the U.S. and Britain to invade and topple his government. Outcome: Iraq was defeated and Saddam Hussein removed from power.

These are just the biggest mountains. If you look at the charts, you will notice how many more mountains there are. The U.S. has won many wars, but by no means all; some wars were inconclusive and others were lost. Experts conclude that the U.S. might win a war against the rest of the world combined, but victory is not certain.

The Cold War, the longest war in U.S. history, involved not just weapons and warfare but especially words and ideas. I began in 1945 and was a struggle between the U.S. and the USSR. The U.S. wanted to contain the spread of communism. The Cold War ended in 1990 with the collapse of the USSR. Even this war cost the U.S. enormous funds and contributed to the demise of the Soviet Union.

This almost constant warfare has led to the U.S. as a source for production of weapons.  Warfare has utterly transformed the U.S. economy. Today that is labeled the military-industrial-congressional complex, a three-sided relationship, which results in the largest military spending budget in the world.  The U.S. now spends more than the next ten countries combined. 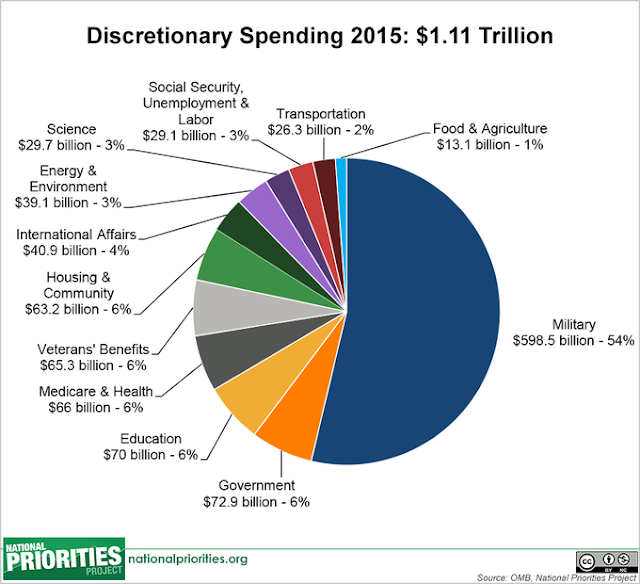 The Defense Department is a misnomer. It should be called the Department of War. When presidents need to boost their popularity, they turn to the military, since such spending and the military itself are immensely popular.  President Trump is no exception.

Via an executive memorandum, Trump detailed plans to fulfill his campaign promises to invest in a bigger military -- including more troops, warships and a modernized nuclear arsenal. He declared he was beginning "a great rebuilding of the armed services of the United States." Later he added:

Developing a plan for new planes, new ships, new resources and new tools for our men and women in uniform-- and I’m very proud to be doing that, As we prepare our budget request for Congress --and I think Congress is going to be very happy to see it -- our military strength will be questioned by no one, but neither will our dedication to peace.

Trump's comments are hypocritical and false. His proposed military buildup is a major departure from the Obama administration on national security issues. It is an ominous development in a nation that is already addicted to war. This is not what the U.S. needs at the moment.

What the U.S. needs is a large-scale reduction in its military and its defense budget. It does not need almost two million men and women bearing arms and a budget that exceeds a trillion dollars a year. A country that is addicted to war is not ready to listen to the biblical message of Isaiah (2:4, New Living Translation):

The LORD will mediate between nations and will settle international disputes. They will hammer their swords into plowshares and their spears into pruning hooks. Nation will no longer fight against nation, nor train for war anymore. 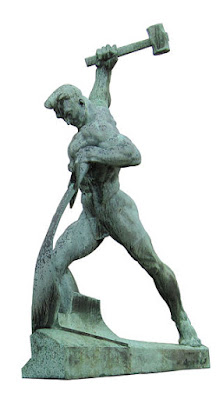 Let Us Beat Swords into Plowshares, a sculpture by Evgeniy Vuchetich
in the United Nations Art Collection

Yet this is the message that the U.S. must listen to and take to heart. The humongous defense budget can be put to better use that to support a bloated military.  If there is ever to be peace on earth, then non-stop war must end. A nation that fancies itself a Christian nation must turn its swords into plowshares and spears into pruning hooks and overcome its addiction to war. Then and only then shall peace reign on a war-weary world. May there be peace on earth! 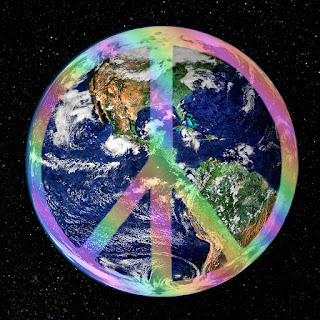