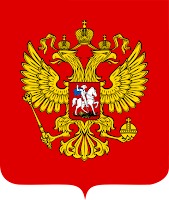 Elections in Russia are not noted for being democratic, in spite of attempts by propagandists to argue the contrary. The elections for the State Duma (Gosudarstvennaja Duma), held on December 4, prove this once again. The Duma has 450 members, elected for five-year terms.
The presidential election will be held on March 4, 2012, when it is expected that Prime Minister Vladimir Putin will be elected president again, after being out of office for four years. This time he is eligible for two six-year terms.
These were the percentage results for each party when they first became available the next day: 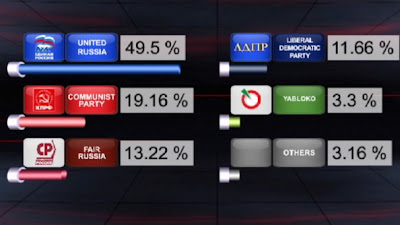 United Russia, the party of  Prime Minister Vladimir Putin and President Dmitry Medvedev, obtained 238 seats in the 450-seat Duma, down sharply from the 315 seats it won in the last polls in 2007. United Russia only managed to win 49.35 per cent of the vote, down sharply from over 64 per cent in the previous election.
Its biggest opposition will be the Communist Party with 92 seats. It was followed by the A Just Russia party with 64 seats and the ultra-nationalist Liberal Democratic Party with 56 mandates. Turnout was just over 60 per cent.
A more detailed breakdown of the election results is as follows:


The opposition claimed the results would have been even more dramatic in clean elections. They argue that the Kremlin controls the entire electoral structure. Moreover, they charge that the Duma is a tool of the executive.
The country’s only independent elections watchdog, Golos, which means "vote" or "voice" in Russian, has come under an unprecedented attack from a Kremlin that fears losing its grip on power and was, once again, overreacting.
On Friday night, the state-controlled NTV television channel aired a blistering report that depicted Golos as a US-funded group whose chief mission is to discredit and destabilize Russia.
Golos, which openly accepts funding from USAID and the European Union, has not done anything remarkable this election cycle. As during previous elections, it has compiled reports of violations of election law--which topped 7,000 by Sunday--and dispatched scores of grassroots observers to polling stations across the country.
When I lived in Russia during the nineties, NTV was noted for its independence, which is what its name means, until the Kremlin took it over several years ago to join the other government-controlled channels. 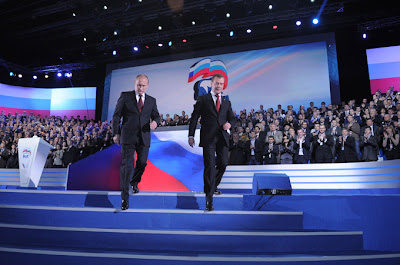 Critics say the picture of a functioning multi-party democracy that the governing party has projected does not match the reality. Real opposition, they say, does not exist, claiming that Putin's notion of a "managed democracy" has also extended to "managing" the opposition.
These critics charge that the opposition has been tamed by the Kremlin and it is only allowed to exist with its approval. They call the parliamentary parties in the Duma the "systemic opposition" or part of the system created by Putin. So they call themselves, the "non-systemic" or "the real opposition" in Russia. 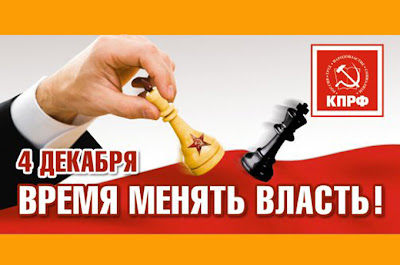 These critical voices include Boris Nemtsov, a former Russian prime minister and a co-leader of the Party of People's Freedom. In June this year, Russian election officials rejected the party's registration documents, effectively barring it from contesting the poll.
All the parties that are allowed to participate in these elections are not independent, writes Nemtsov in his blog.
His fellow opposition leader, former world chess champion Garry Kasparov, agrees: "All these parties are 100 per cent under Kremlin control. We know these people, they are not newcomers, they have been around for 20 years. It is clear they are no longer in the position to challenge the Kremlin. Voting for them is to vote for puppets in this theatre of the absurd."
Mikhail Gorbachev has now added his potent voice to the growing protest against this election. Because of the extensive fraud, he is calling for a new election.
Amid growing international alarm, Gorbachev said the results of Sunday's poll should be invalidated and new elections held due to "numerous falsifications and rigging."
"The results do not reflect the will of the people," stated Gorbachev, who was president when the Soviet Union collapsed two decades ago.
"Therefore I think they (Russia's leaders) can only take one decision--annul the results of the election and hold new ones." 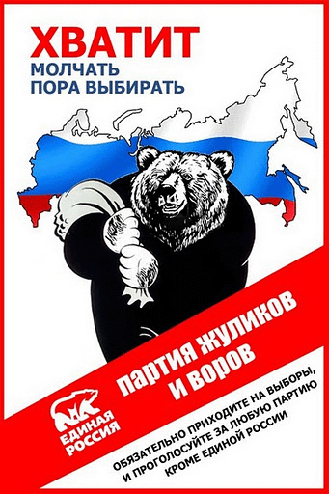 This anti-United Russia poster says, "Definitely come and cast your vote, and vote for any party except United Russia," which it describes "as the party of  swindlers and thieves"

But Nemtsov and others say the strategy exemplified in this poster is naïve, and the only way to protest against Putin's United Russia is by spoiling ballot papers and actually putting a cross in boxes next to the titles of all seven parties.
"To vote for any party--those who will get into the Duma and those who won't-- is to give legitimacy to the disgusting farce that these elections have become," writes Nemtsov.
And as if to support these assertions, just three days before the vote, a high-ranking election official told the English-language daily The Moscow Times that United Russia had struck a deal under which the other three parliamentary parties (the Communists, the LDPR, and A Just Russia) are "pretending to play the opposition" in exchange for guarantees that they will secure seats in the next Duma.

"They want to preserve the status quo," this official added. "And to achieve that they have agreed to play the roles the Kremlin has given them in this farce." The offical asked for anonymity for fear of reprisal.
Nemtsov has even created a group, with other fellow opposition-minded liberals, that have even come up with a series of online cartoons, dubbed "Common Adverntures of the Piglet Nah-Nah in Putin's Russia".
One shows the piglet who goes to a polling station and sees Putin's face everywhere, even on the ballot paper. Engraged, the piglet puts a cross in all boxes next to all parties. "Put a cross on the crooks in power," urges a voice at the end of the clip. "Vote against all! Vote for Russia!"
Another shows the piglet trying to get on a merry-go-round--with faces of the same Russian politicans, leaders of parliamentary parties, who simply change places as Putin sits atop the fairground ride. 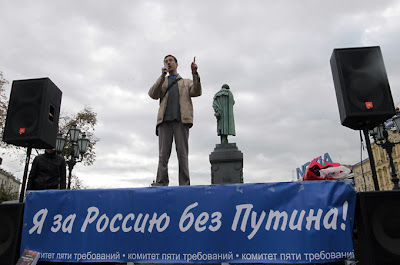 The Russian opposition are not the only ones to charge electoral fraud.
The Organisation for Security and Cooperation in Europe (OSCE), said that this election was not fair, but it refrained from blaming any party. OSCE monitors explained that the polls were slanted in favour of United Russia and marred by "frequent procedural violations" including ballot stuffing.
Several thousand people took to the streets of central Moscow for several days to protest against alleged fraud and voting irregularities after Vladimir Putin's United Russia retained power, albeit with a greatly reduced share of the vote.
The growing disillusionment of Russians with United Russia is concentrated among the country's intellectual elites, young professionals, urbanites and internet users. Their grievances vary from the stifling of freedoms to Putin's growing authoritarianism and the calcification of Russia's political life.
"Our votes have been stolen long time ago," writes Garry Kasparov. "They've been stolen together with our freedom of choice and with our right to express a point of view that is different from the one promoted by the official media."
But a growing majority of Russians say they are unhappy with the ruling party because it has failed to lift their standard of living, despite years of high oil and gas prices, over which Putin presided.

"Our pensions are still low and our roads are still bad," says one Moscow resident.
"The party of power could have done so much more in the ten years it's been in power," says another.
Low salaries, small pensions, soaring inflation, a crumbling infrastructure and unreliable healthcare are the main points of dissatisfaction for most Russians.
As a result, Putin's popularity has plummeted. His approval rating is 61 per cent, his lowest rating since August 2000, when he was dogged by the sinking of the Kursk submarine, which killed all 118 crewmen aboard. 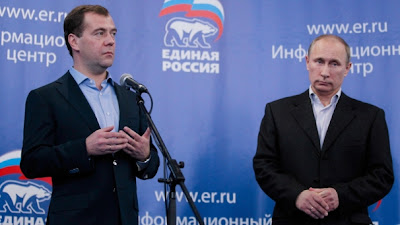 One way that Putin may be able to survive is by fixing the blame for this election fiasco squarely on Medvedev, who headed the party list for United Russia. Since Putin and Medvedev have agreed to trade jobs again in March, the loss of Medvedev conveniently removes him as a rival to Putin. Of course, this is just a guess on my part.
For the record, I should disclose that I did not forecast Putin's meteoric rise to power in 1999. In my discussions with my political science students in the Faculty of Philosophy at Moscow State University at the time, Putin's name never came up. We did discuss many other potential candidates for the presidency.
No one forecast his rise, to the best of my knowledge, in the year or two before it happened.
In the recent election, United Russia resorted to many administrative tactics to win. Whether they will be able to win in March does not seem in doubt as long as Putin has control of the levers of power in the Kremlin.
Putin is a strong leader. Precisely the sort of man Russians are fond of. A man in the mold of Stalin, the man of steel, who ruled Russia with in iron fist for many decades. Time will tell.