Was the Durban climate change conference a success? 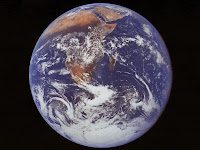 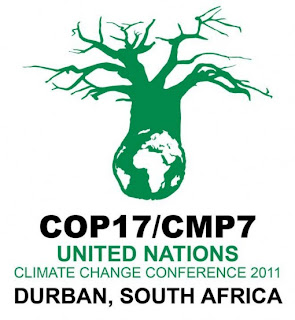 It was originally scheduled to meet 28 November-9 December 2011, but by the final days it became clear that an extension would be required; otherwise there would have been no result at all.
The Durham agreement, however, is less than it seems on the surface. It is actually an agreement to make an agreement by 2015. It is too little too late to help deal effectively with climate change.
Durban was not the success that many delegates tout it to be. Environmentalists are very disappointed.
This agreement will probably not be sufficient to prevent a global temperature rise of more than 2°C, and might easily allow a 4°C rise. Yet the deal was as much as could have been expected from Durban. 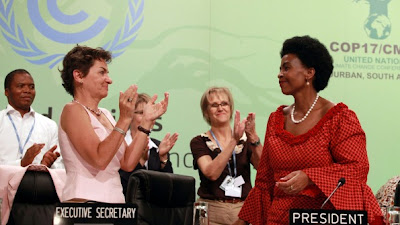 Applause greeted the finalization of the agreement

The deal renews the Kyoto Protocol, the fraying 1997 emissions agreement that sets different terms for advanced and developing countries, for several more years. But it also begins a process for replacing the Kyoto agreement with something that treats all countries, including the economic powerhouses China, India and Brazil, equally.
The delegates also agreed on the creation of a fund to help poor countries adapt to climate change, although the precise sources of the money have yet to be determined. The fund will also enable these countries to take pay for the preservation of tropical forests and the development of clean-energy technology.

The reserve, called the Green Climate Fund, would help mobilize a promised $100 billion a year in public and private financing by 2020 to assist developing countries in adapting to climate change and converting to clean energy sources.
Further details are available in your daily newspaper, so I will not elaborate, except to raise some questions about the supposed success of the conference.
Many nations left the conference feeling that they had won, but the real losers are the developing nations who have contributed very little to global warming in the past, but are now being asked to help fight climate change.
The Green Climate Fund, even if all the promised money were forthcoming, would still not be enough to defray the costs to these largely poor countries. According to this agreement. China and India will be treated equally with the more developed countries. They now contribute to climate change in a major way, but claim they are not yet ready to bear the burden. Thus they got an exemption until 2020. 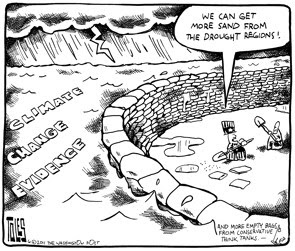 Skepticism about climate change continues, especially in the US

The US played a quiet role at Durban, which is understandable in the run-up to next year's elections. For the US it was thus a good meeting. President Barack Obama could only lose through having his delegation in the public eye. Give too much away, and the president would be pilloried for being soft, especially if the parties being favored included China.
But to stand out against a tide of other countries trying to move forward on climate change, as happened at the UN meeting in Bali four years ago, Obama would have risked alienating more of the supporters, who reportedly are already too disillusioned to bother volunteering for his campaign this time round.
The "quiet man" tactics worked perfectly. Canada took most of the heat early on. After the ministers arrived, the US was barely visible, and if anyone appeared "hard-line," it was India and China.
Canada, instead, got much of the blame, and deservedly so. Because of the Alberta tar sands, it has much to lose if it were to try to meet the commitments that it made in Kyoto. 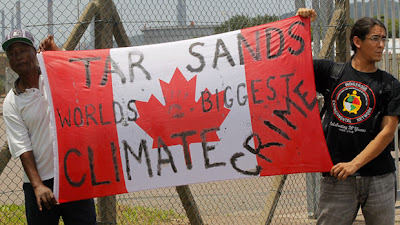 According to some critics, the expectations of what the Durban talks would achieve were already low, but what was achieved was even less. Canada contributed to this by its irrelevance.
The critics said that Peter Kent, the Canadian Minister of the Environment, played little role in the talks. He did not take the floor in the final session, and he was not a member of the select group of ministers who did the final preparatory work on Saturday. Instead, in the last day of meetings, he was seen repeatedly in discussions with US negotiators.
“It shows that Canada has become irrelevant on the international scene,” said Canadian environmentalist Steven Guilbeault. “We’re not a player any more. The US is the only country we’re talking to and listening to.”
Mr. Kent said he “didn’t want to be a distraction” by speaking publicly in the final session. The Canadian negotiators were “deeply involved” in many key issues at the Durban talks, and were talking to many countries, he explained.
Thus Canada rightly deserves a large share of the blame for the lack of success of the Durban conference. 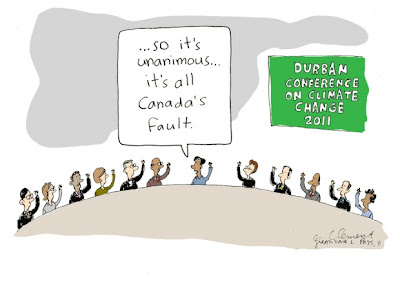 Canada did not help its cause by its decision the day after the conference to withdraw from the Kyoto protocol, which Mr. Kent announced as soon as his plane arrived back in Ottawa.
The decision to do so will save the government an estimated $14 billion in penalties, Kent said. The Conservative government says it has no choice given the economic situation.  "Kyoto for Canada is in the past. As such, we are invoking our legal right to formally withdraw," Kent explained.
The Kyoto Protocol, which expires next year, committed major industrial economies to reducing their annual CO2 emissions to below 1990 levels, while providing financial supports to developing nations to encourage them to follow suit eventually. Canada ratified the accord in 1997 but was not on track to meet its legally binding targets. 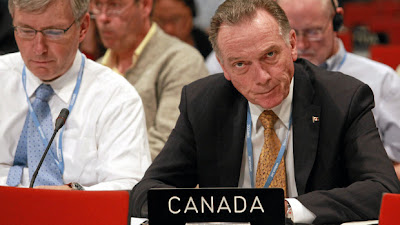 The reaction of many countries to Canada's decision was overwhelmingly negative, with the notable exception of Australia, another resource-rich country, which had already argued at Durban that it would not be part of a second commitment period under Kyoto until a broader agreement was reached covering all major emitters including both developed and developing countries.
Durban confirms in the minds of many people in the world that most nations are only interested in pursuing their own narrow interests on the world stage, rather than help to save the planet.
These nations are doing everything they can to avoid telling the truth about the sad state of the world which we share. Their actions therefore deserve the label that I am assigning to it: "Climate Gate."
Thus it is incumbent upon us to speak the truth in love and denounce these lies and distortions. The Durban conference was not the success that many nations tout it to be. Seen from the perspective of our suffering globe, it was a failure. Durban, I repeat, is too little to late.
Another conference is sorely needed to help rescue our planet. 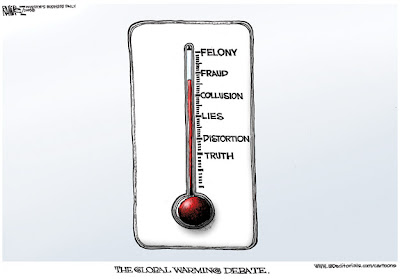 The great cover-up, aka "Climate Gate"