An open letter to all Republicans about the government shutdown

I am reluctant to write this letter, largely because it probably will not accomplish very much. I realize that only a few people will read it. While some may agree with me, many will not. In either case, most do not have the power to change the situation. Yet I am so upset by the government shutdown in the US and the effects it may have both on the US and the rest of the world that I feel constrained to include this letter on my blog.

My comments are directed not only to those who are active members of the Republican Party or registered as Republicans but to everyone who votes Republican. I am upset especially with those Republicans who support the shutdown of the US government. Not only the Tea Party wing of the party but all Republicans are also responsible for this mess.

I write this as a foreigner, a Canadian who has lived and studied in the US, where I earned three degrees, including two masters. I have close relatives there, and travel to the US frequently. Thus I am not a stranger to the country. My comments should not be misconstrued: they are meant in love. I am concerned about the US and its role in the world. But because of that role, foreigners should also be allowed to comment on what is happening in the US. It affects all of us.

This shutdown is a perversion of democracy. Americans pride themselves on their democratic institutions, and even want to export democracy to other countries, but this action has not only puzzled much of the world but made the US a laughing stock.

You, as Republicans, have turned Congress into a game that children play where, when some kids are likely to lose, they pick up all their toys and announce they are going home. End of game. Yet, ultimately, it is self destructive. 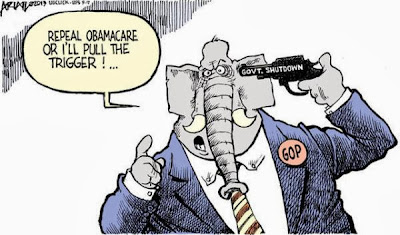 Ever since the Patient Protective and Affordable Care Act was approved by Congress, you have attacked it relentlessly, even taking it to the Supreme Court, which ruled that it was constitutional. On the day that the Act, known better as Obamacare, was being implemented though the opening up of health exchanges where Americans could shop for coverage, you forced the federal government to shut down.

The effects of the shutdown are already being felt, although there are some notable exceptions. You brought the government to its heels by refusing to pass the necessary budget measures unless the government would delay Obamacare for one year. You hoped, if possible, to demolish it.

You then tried to blame the Democrats for the shutdown, but the refusal to negotiate is yours exclusively. The American people now realize that. By shutting down the government you wanted to stop Obamacare, but it is already too late to do that. Even if you refuse to negotiate raising the debt ceiling, Obamacare is here to stay. Soon Americans may even grow to appreciate it.

Obamacare, unfortunately, is a badly flawed piece of legislation. But you are responsible to a large degree for not permitting a better bill to be passed by Congress. The final bill is a confusing, expensive mess. Many people, especially the poor, are still not adequately provided for. They are the ones who will continue to suffer the most. But to destroy Obamacare would make a bad situation even worse.

What the US needs is a single-payer, universal, system as in most wealthy countries. This is also what the developing world wants, not the patchwork job that has resulted and for which you must share the bulk of the blame. 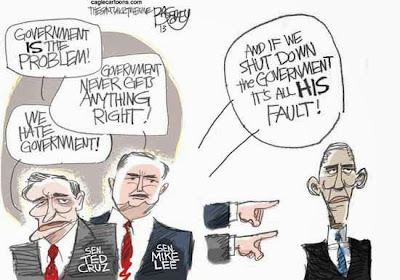 Your real concern, as I see it from my vantage point, goes beyond destroying Obamacare. You are wearing ideological blinders that prevent you from appreciating the benefits of a universal system. You are opposed to big government and you are afraid of any infringement of your personal freedom. These two beliefs are closely related.

You are welcome to these beliefs, although I disagree with you totally, for several important reasons. Let me list just a few.

First, on a personal note, let me assure you that I am not a Communist or even a socialist, although I heartily approve of a universal system of health care as it exists in Canada. Yet some Republicans that I know have labelled me as such: "Canadians are all commies!"

Admittedly, the Canadian system is not perfect, but it is better that what the US will have under Obamacare, as I know from personal experience. A few weeks ago I needed an MRI because of severe pain in my lower back. That was quickly arranged and it was done a few days later. All I had to do was show my health card. I did not have to pay one penny. Furthermore, if I need medication, it costs me only about four dollars, the rest is taken care of by the province. I do not feel that my personal freedom is infringed upon in any way.

In contrast, whenever I travel to the States, I buy supplementary medical coverage in case of an emergency. Friends of mine have been nearly bankrupted because they did not have such extra coverage. Is that very expensive system what you really want? Under Obamacare many more Americans will now be covered, but the system will be much more expensive than it needs to be. Imagine the savings that would result if insurance companies were excluded. Will excluding these companies involve a loss of your personal freedom? 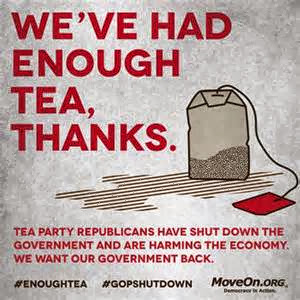 Second, you are blind because you do not fully understand the purpose of government. The Bible teaches that the role of government is to protect us from evil and to promote the good. For that reason, government must be larger than than the armed forces that protect you from external enemies. It must provide as well for the needs of all of society. It must care especially for the weakest and poorest members.

The government is also responsible for justice. What you have in the US can hardly be described as a just system. Members of Congress enjoy topnotch medical care, but the poorest in society are denied adequate services. You have Medicaid, but millions are still not properly covered under Obamacare. Is that justice?

Where is the love for the poor that is preached in all Christian churches? You, however, are so hostile to government that you willingly sacrifice the poor on the altar of small government. God has mandated the government to protect them, not sacrifice them. Many government programs at every level of government have been axed in the name of austerity and budget cutting. Unfortunately, this is happening in many other countries as well, not only the US. It is an example of politics influencing theology rather than the other way around.

Third, politics by its very nature demands the art of compromise. Politicians must be willing to negotiate with their opponents for government to work effectively. Such negotiations should take place while legislation is being debated, not after it has been signed into law. Then it is too late.

What you are doing during the current government shut down is blackmail, not negotiation. Like those kids who take all their toys and go home when they longer can get their way, this is infantile behavior and not what one expects from mature, responsible politicians. 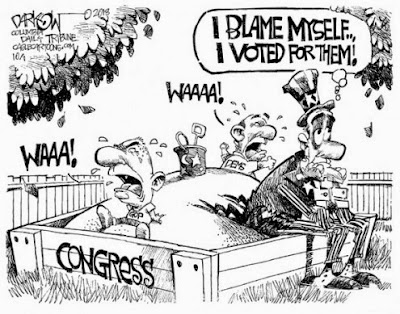 Fourth, how far are you prepared to go in your refusal to negotiate? If no new debt ceiling is approved, are you willing to plunge the US into a recession?  What about the effect this will have on  the rest of the world?

Don't put the blame entirely on the Tea Party people. They are the most extreme element in the Republican party, but the ideology that motivates them is more general in that party. If it were not, the Tea Party would be the tail that wags the Republican dog. That dog is already sufficiently motivated to wag its own tail.

I invite the leaders of the Republican party to refuse to listen to these extremists any longer and instead sit down with the Democrats and pass the necessary legislation to end the budget crisis. Is this too much to ask? Is it illegitimate on my part to ask all Republicans to do what they can so that such shutdowns become a thing of the past. Then the US can begin to be an example once more of a democratic system.