I am back from an extensive trip to Europe, where I visited Amsterdam, Prague, and Istanbul, which is where I saw the Noah film. The viewing prompted this post. I hope to make more regular postings again. 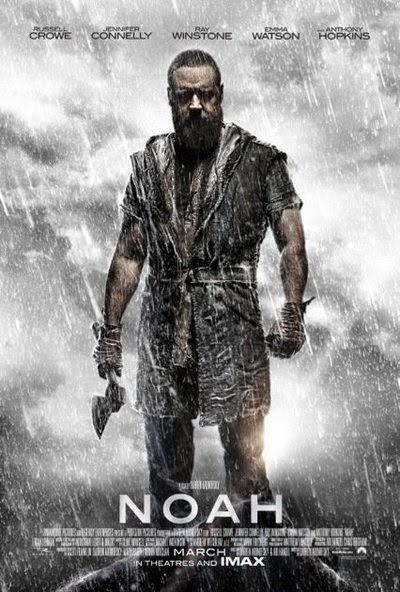 Banned by some Muslims and panned by some Christians, Noah, which was released on March 28, is doing well at the box office. This movie is now showing in theaters all over the world, although as I am writing this, it still had not recouped its cost of $125 million.

I saw it in Istanbul, which is appropriate since Turkey shares with Armenia the honor of hosting Mount Ararat, the mountain where Noah's Ark is reputed to have landed after the flood had receded somewhat.

Some Muslims do not want to see this movie because it depicts Noah, who is a prophet and thus a sacred figure in Islam. Prophets do not share the same weaknesses that most mortals do. Similarly, some Christians are very critical of this film, regarding it as blasphemous and a distortion of the biblical story in Genesis 6-9.

These Christians are partially right. Noah is not blasphemous, but it is a distortion of the Genesis account. It is the writer and director, Darren Aronofsky's, interpretation of the story of of Noah and the Flood. He has made more than a few changes, as anyone who has read the biblical story realizes. But this is his account, which bears only a passing resemblance to the biblical one. 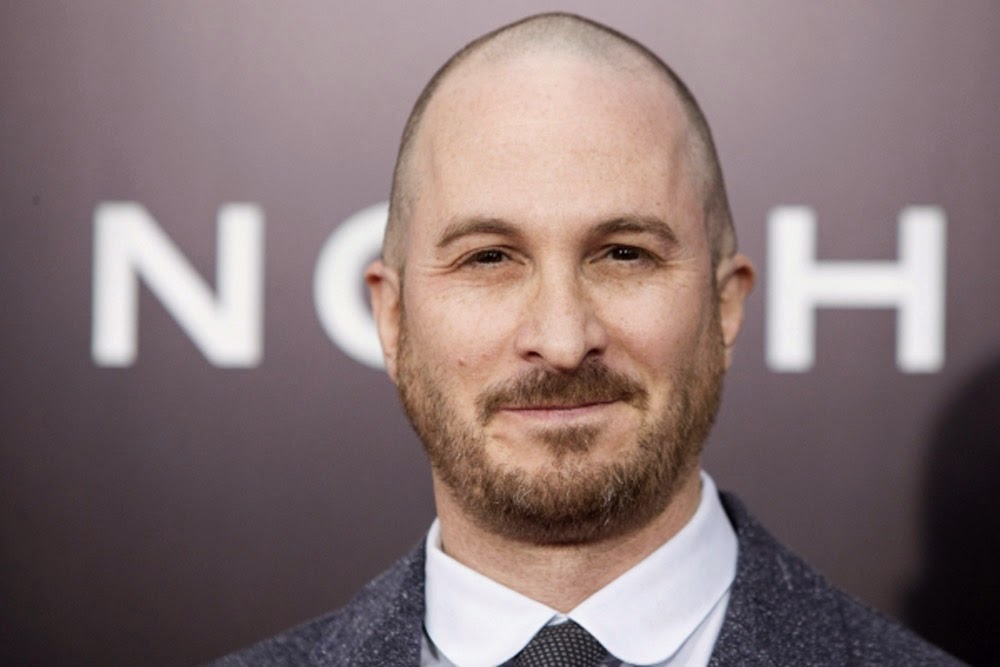 As some critics have pointed out, Aronofsky has stirred in ideas from earlier film versions of Noah's story, plus bits from other religions and mythologies, including kabbalism and pre-Christian gnosticism.

Aronofsky has thrown in flashbacks to earlier parts of the Old Testament, including Adam and Eve's ejection from the Garden of Eden, and Cain's slaying of his brother Abel. Some flashbacks are helpful, but not all.

The film's most visually inventive sequence is a self-contained, time-lapse retelling of the birth of the universe, as the Big Bang. Unlike the other flashbacks, which help to explain what led God to want to destroy the human race through a flood, this episode adds little to the Noah story, except to explain the opening screed, "In the beginning there was nothing . . .", which is a departure from the biblical, "In the beginning God created the heavens and the earth."

God is never mentioned in this film by name. He is simply called "The Creator." God does not speak directly to Noah, but through a series of mysterious dreams. Noah does not seem to fully understand why God is sending a flood to destroy the human race but wants to preserve Noah and a boatload of animals in the Ark.

Noah thinks all along that when his sons die that will be the end for humanity, although the animals will be have been saved. In fact, Noah's understanding of salvation is extremely limited, as the scene where he wants to kill his grandchildren is aborted only when he realizes his love for them. His discovery of love for them is wonderful, but it misses the real purpose of the Ark, which was to preserve humanity because of God's great love for them. 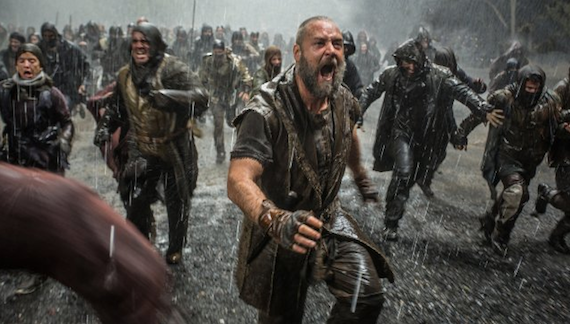 In this film Noah is portrayed as an eco-warrior who hides his 600 years very well. Aronofsky's concern for the environment, which is perhaps his chief motive for this production, is admirable, but unfortunately his grasp of the biblical story is minimal. Aronofsky has admitted as much when he has called his pet project, "the least biblical 'biblical' film ever."

In this film there are echoes of some of his earlier works, like Pi and The Fountain, as well as evidence of blatant imitations from other notable films, such as Lord of the Rings, Waterworld, Galaxy Quest, and Transformers, just to mention a few.

Russell Crowe, who plays Noah, does not come across as genuine. His performance stands in striking contrast to the stellar effort displayed by Jennifer Connelly, who portrays Naameh, Noah's wife. Her devotion and anguish for her spouse help to lend Noah some human qualities. Without her, Noah would be a cardboard character. But because of her, there is grace in a film that displays little grace otherwise. 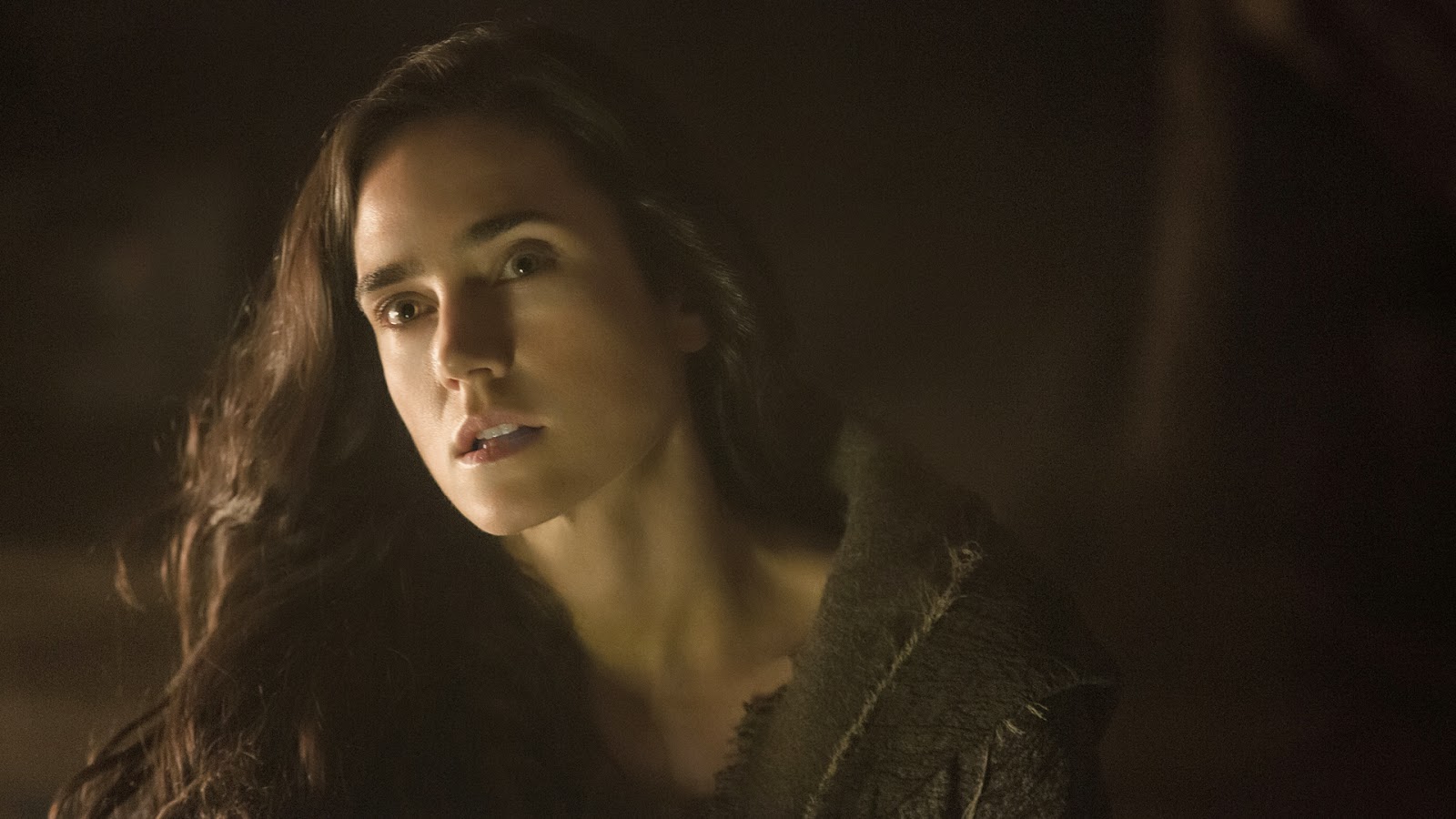 This film is notable for its violence. Noah is shown hacking people to pieces before he enters the Ark. In this he is joined by "The Watchers," a race of fallen angels who had allied themselves with the descendants of Cain, but in the end helped Noah to build the Ark and defend it from those humans who desperately wanted to get on it to save themselves. The Watchers became encrusted with molten magma when they fell from heaven. Their lumbering makes them scary, but it also contributes much to making this film as preposterous as it is. They could better have been left out. After all, in the Bible Noah and his sons build the Ark without assistance from others.

Paramount Pictures pressured Aronofsky to re-edit this film to make it more presentable to Christians who might be offended by his departure from the biblical story, but the director refused. Thus we have a film that is entertaining in its own way, especially for those who enjoy violence and are not deterred by the superficiality of much of the acting. Yet this film does not deepen our understanding of what happened to Noah and his family. The distortions are so great that there is little of Genesis account that is still recognizable.

One of the most serious distortions relates to Noah's three sons, who in the Bible all have wives by the time of the flood. Aronofsky, instead, creates family conflict by denying that any of them had wives, though he does provide one for Shem by introducing an adopted daughter of Noah. She later marries him. How Noah and his family can then continue the human race is never explained. Perhaps it does not matter. Noah, as mentioned already, thought that the race would end with him and his family. That Shem's newly-born daughters could later have become wives for his brothers is too preposterous even to imagine.

Aronofsky is one of the finest directors ever, but this film does not contribute to his legacy. The theological richness of the biblical story is lacking. Hence my profound disappointment -- a disappointment that is shared by many, I suspect. I watched this film avidly, but I left the theater feeling empty and disappointed.. 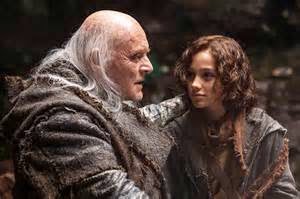 This had been a waste of time, at least from my perspective, even though it had entertained me for a few hours, in 3-D, no less. Yet I did not learn anything I did not already know. Other viewers will probably be confused by the many distortions of the biblical story.

I am still waiting for a Noah film that is true to the Bible and at the same time is of great artistic merit. This film, sad to say, does not meet either of these criteria well. I expected much more from Aronofsky, after his earlier works. This film is thus a travesty. It may be a blockbuster, but it is not a truly great movie.

As a theological educator I am especially disappointed in this film. What could have been an opportunity to teach about God's love for humanity by sparing a remnant, instead becomes a mishmash of episodes from other films and a multitude of other stories. What should have taught the world about the biblical idea of salvation, has become a vehicle for making money. This is Aronofsky's film, however, not mine.

This is certainly not Hollywood at its best. I do not expect the major movie studios to become seminaries, but I would like them to be true to the original story as many Christians and Jews understand it. The story of Noah and the Ark has turned what could have been a great film into something that cheapens the story that has traditionally been understood. There are other weaknesses as well.

The acting of the major actors, such as Crowe, is substandard. Except for some of the women, much of the acting is poor. In only a few roles do the actors shine. Just think of Anthony Hopkins, who plays Methuselah, whose remaining passion in life (at the venerable age of 969) is looking for berries. It is a minor role, but well acted. When he does find them, it becomes almost a sacramental act. 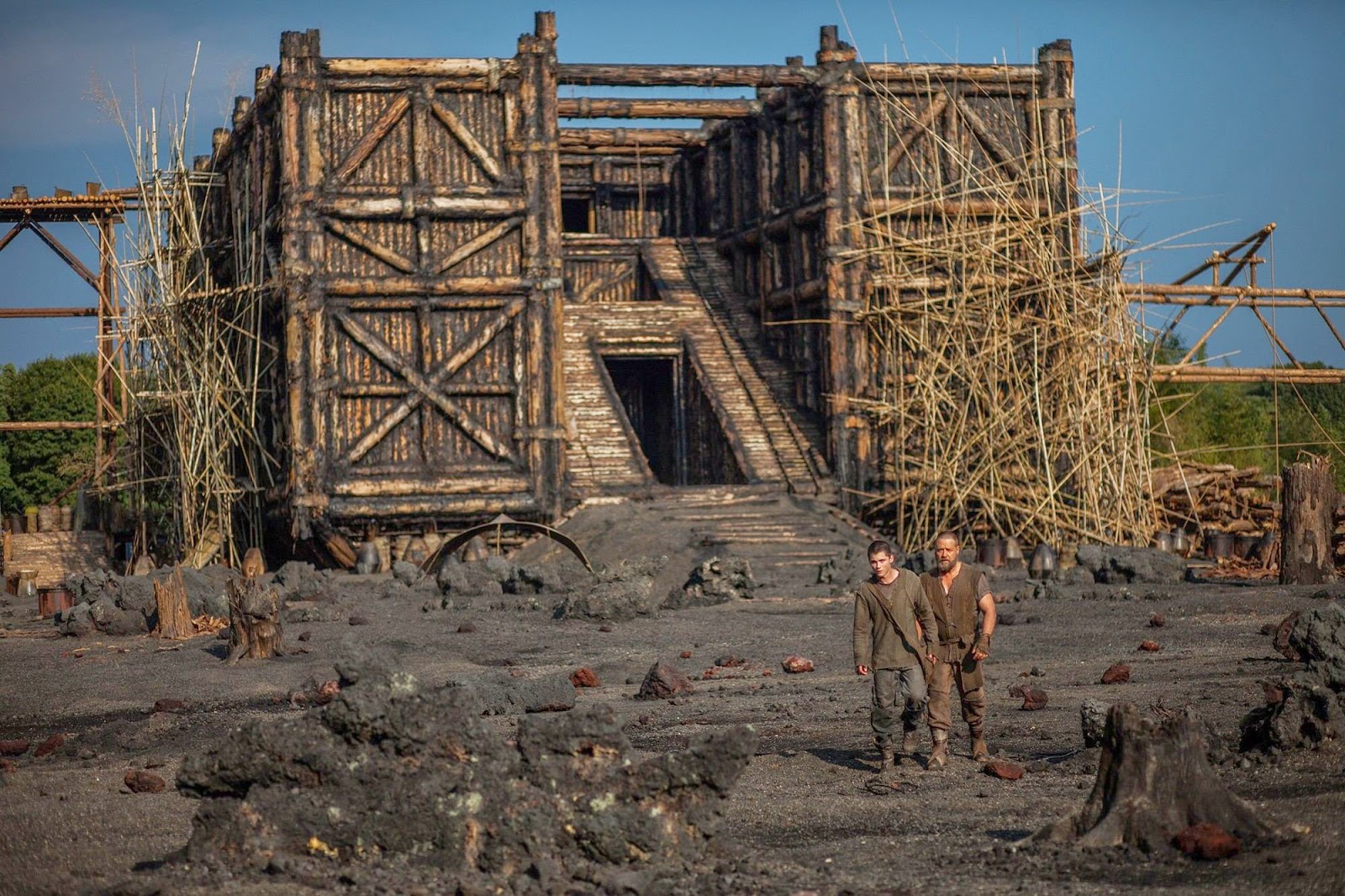 Aronofsky, at least, did the Ark right. It was not a boat, but instead was a box that from the perspective of the Bible was controlled by God, since salvation is God's work. Also, Noah is not the hero in the biblical story but he is a rather weak man. Noah only becomes truly righteous late in life. For Aronofsky, Noah too has weaknesses, but he is the hero of this eponymous film.

Aronofsky concludes this film with the covenant that God makes with Noah. The rainbow is the sign that God gives of his promise not to destroy the human race again with a flood.

So Aranofsky does not get everything wrong, but too much in this film is colored by his peculiar presentation of this amazing story. There are a few things that Christians can learn from some of his other sources, but most of them distort the story in ways that leave me disappointed.

I regret that I could not ask the other film viewers in the theater what they thought of this film. There were very few there that afternoon, and most were Muslims. Turkey is about 97% Muslim, with Christians making up only 0.2% of the population. 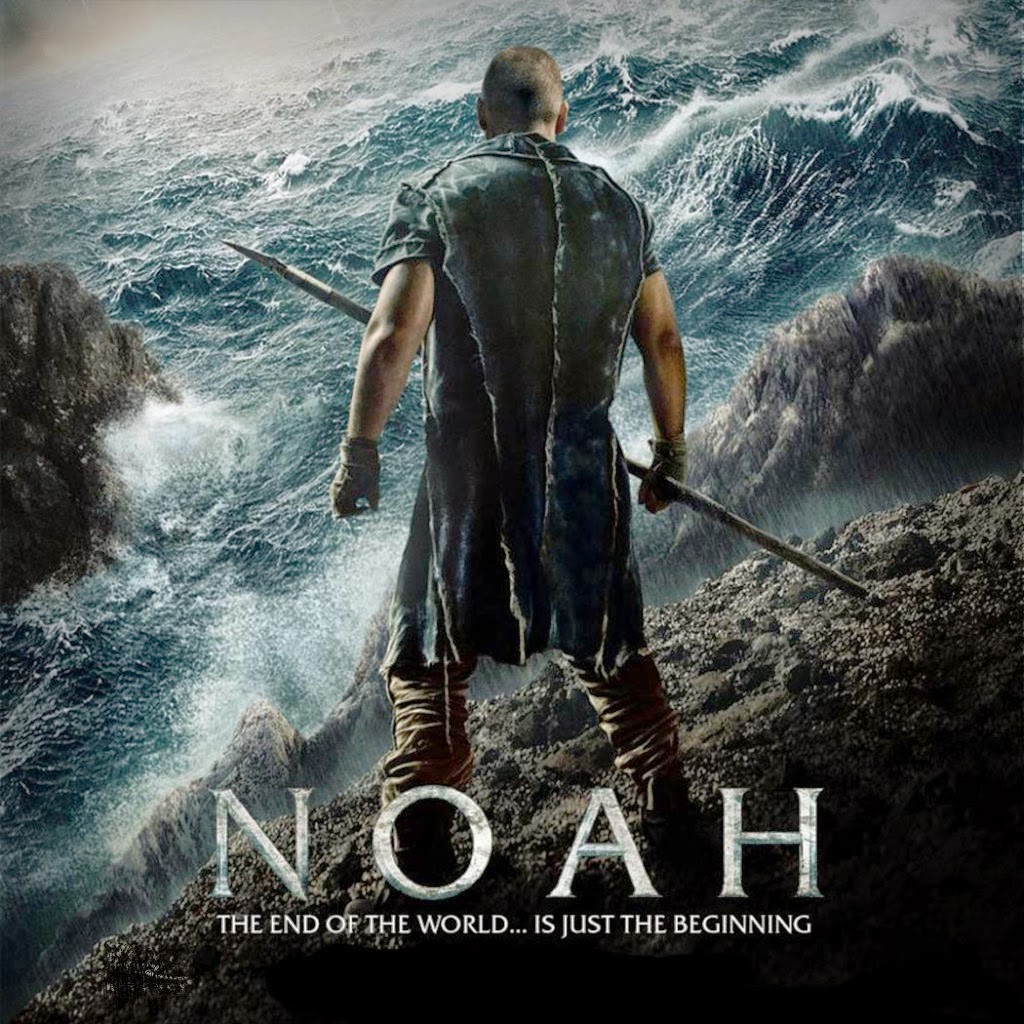 In conclusion, for Aronofsky the story of Noah is not that of salvation, at least not in the traditional sense. Instead it is a warning about a looming ecological disaster, which is a highly secularized view of salvation. There are many subtexts in this film that are interesting, but the biblical story has largely gotten lost amid all the other stories that Aronofsky is telling.

Maybe that is the greatest failing of this film: Aronfsky has too many stories to tell. Noah, the movie, is not the story I was looking for when I went to the theater, yet I must admit that it was not as bad as I had heard. That is maybe part of Aronofsky's genius: he is a great storyteller. Too bad he is not telling the biblical story as I, and many others, hoped to hear or, in this case, to view.