Pride and prejudice is the topic of this post, but it has little to do with Jane Austen's celebrated novel, except for the shared title. The many expressions of sexuality that this post mentions are certainly different from that of the book.

Toronto has organized a Pride Parade for many decades. This one, however, was the biggest ever, with an estimated 12,000 people participating in the parade and several million watching under the sweltering sun. I was unable to attend this year, but I was fascinated by some of the events, including a mass wedding of 115 same-sex couples at Casa Loma, one of Toronto's main attractions.

My purpose is not to describe this year's Toronto Pride event, which many newspapers have already done, but my intention is rather to reflect on this significant event which is the subject of great pride -- hence the name. This event reveals the both the pride and the intense prejudice that led to it in the past and even now prompts further prejudice, since some of what happens during the parade, such as public nudity, is purposely "in your face."  But that is the price we may have to pay for the celebration of Pride.

Earlier in the month Toronto hosted World Naked Bike Ride which, as the name indicates, has people ride as bare as they dare. Both events have nudity; the latter more than the former. 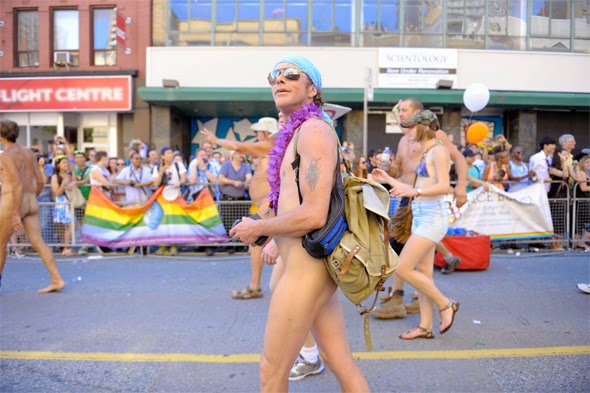 Blatant nudity: one of my objections to Pride

Prejudice gave birth to Pride. Raids by the police on four gay bathhouses in Toronto on February 5, 1981, led directly to massive protests and a "Gay Freedom Rally" a month later on March 6. This was effectively Toronto's first Pride event, and it later evolved into the annual Pride week held towards the end of June.

During that week people from the LGBT community can express their pride in the face of the widespread prejudice that existed. and continues to exist in many parts of Canada, even in Toronto. This is now one of the largest festivals of its kind in the world, while Toronto in the last few years has become more diverse and accepting of people regardless of their sexual orientation as well as their ethnicity.

Today the term LGBTQIA (Lesbian, Gay, Bisexual, Transsexual, Queer, Intersex, Asexual) is often used. This is regarded as a more inclusive term than LGBT for people with non-mainstream sexual orientation or gender identity. Even more letters are sometimes used for those whose orientation or identity is not included on this list.

I admit I do not fully understand all these distinctions, but then I am not part of those communities. However, I do try to be accepting of them. In that respect, I am typical of many people in Toronto. 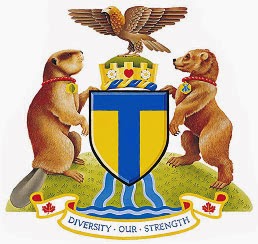 The motto of Toronto is "Diversity Our Strength." Toronto is a tolerant and inclusive city in which the World Pride parade serves as a symbol of the diversity of humanity as well as its unity. People of every orientation, including straight, can participate.

I am writing this post with some trepidation. Inevitably, I will be excoriated for publishing a defense of Pride, but I do so knowingly. I have many friends who are gays or lesbians. Some I have known for decades. While I myself am straight, I will defend them and their right to live as they deem best.

In addition, my local church prides itself on diversity, certainly in terms of sexual orientation. In adopting this stance it is, at least in part, in conflict with the official position of the Christian Reformed Church, which does not accept homosexuality.

The still pertinent synodical pronouncement on the subject of homosexuality in the CRC dates back to 1973. It condemns homosexuality, although it encourages love and acceptance for homosexuals. This statement has been consistently sustained, in spite of pressures from both within and outside the denomination to modify it. 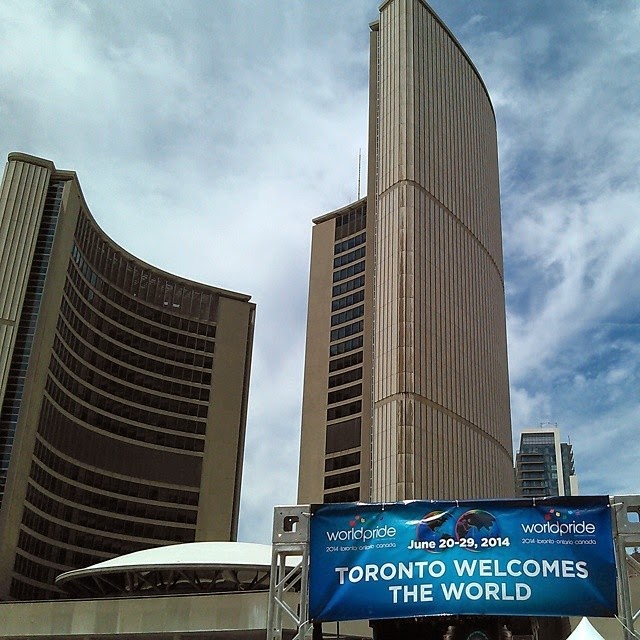 This position of the CRC has been summarized as follows (http://www.crcna.org/welcome/beliefs/position-statements/homosexuality):

Homosexuality is a condition of disordered sexuality that reflects the brokenness of our sinful world. Persons of same-sex attraction should not be denied community acceptance solely because of their sexual orientation and should be wholeheartedly received by the church and given loving support and encouragement. Christian homosexuals, like all Christians, are called to discipleship, holy obedience, and the use of their gifts in the cause of the kingdom. Opportunities to serve within the offices and the life of the congregation should be afforded to them as to heterosexual Christians.

Homosexualism (that is, explicit homosexual practice), however, is incompatible with obedience to the will of God as revealed in Scripture. The church affirms that it must exercise the same compassion for homosexuals in their sins as it exercises for all other sinners. The church should do everything in its power to help persons with homosexual orientation and give them support toward healing and wholeness. A synodical report titled Pastoral Care for Homosexual Members is available at www.crcna.org/SynodResources.

Needless to say, I disagree with this statement. The position of the CRC is outdated and does not reflect the current research on homosexuality. This statement is also only one interpretation of the Bible; there are many others. Unfortunately, the CRC is not alone in adopting it as its official stance. Many Christian denominations have done something similar.

The Roman Catholic Church condemns the practice of homosexuality as contrary to natural law. For this reason it is opposed to same-sex marriage. In spite of the desire of Pope Francis for changes in that church, the position on same-sex marriage is not likely to be modified any time soon.

The Orthodox churches also condemn homosexuality, as do many Protestant churches. The reasoning may differ, but the conclusions are almost the same. 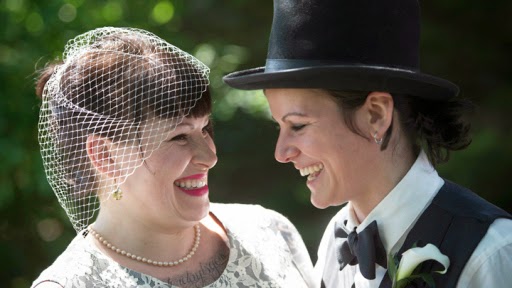 One of the many same-sex couples married at Casa Loma

The Protestant position is clearly exemplified, as an example, in the decision of Trinity Western University in British Columbia to require all faculty and students to sign a form affirming that marriage can only be between a man and a woman. This requirement does not respect academic freedom and imposes a standard that not all Christians accept as biblical. It has also created an enormous furor regarding the establishment of a new law school by TWU. Some law societies in Canada regard this as inappropriate for a law school and, more importantly, as an infringement of human rights.

It is remarkable that Christians from many denominations, including Catholics, have been in the forefront of promoting change on homosexuality. In this respect, they are ahead of the general population, which tends to be even more conservative. This innate conservatism has been augmented by people coming from countries where homosexuality is forbidden and, in some cases, is punishable by death.

In Islam homosexuality is not only a sin but is regarded as a crime. Other religions also have objections to it. Traditionally, Judaism forbids it, but some Jewish denominations now do permit it. As might be expected, Hinduism and Buddhism have a wide variety of views on this.

My personal stance on the issue of homosexuality will no doubt be severely criticized by some, but I write with the hope that further discussion on this topic may prompt change in my own denomination as well as in many others. The CRC has thus far been unwilling to make changes, as have many other denominations, but change will come eventually.

While I cannot endorse everything associated with Pride, I hope I have over many years eliminated some of the prejudice that I admit I too have had in the past. Therefore, I encourage others to do the same.