Who benefited most: the Pope or the Donald? 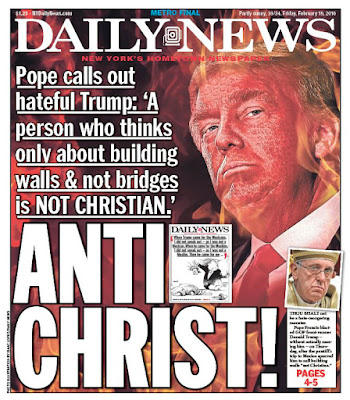 Pope Francis and Donald Trump arrive at the Pearly Gates on the same day. "Fancy meeting YOU here," they say to each other. "I didn't think YOU would qualify for entrance." St. Peter looks at both of them, sadly shakes his head, and tells them, "Neither of you will be admitted today. Both of you must first do penance for the unloving comments you made: one about Mexicans and Muslims and the other about fellow Christians." With a start, I wake up. I realized that this was only a dream. Or was it?

In case you missed it, The Pope condemned Trump's policies, especially regarding border security when he said (in Italian):


A person who thinks only about building walls, wherever they may be, and not of building bridges, is not Christian. This is not the gospel. As far as what you said about whether I would advise [people] to vote or not to vote, I am not going to get involved in that. I say only that this man is not Christian if he has said things like that. We must see if he said things that way, and I will give him the benefit of the doubt.

For a religious leader to question a person's faith is disgraceful. I am proud to be a Christian and as president I will not allow Christianity to be consistently attacked and weakened, unlike what is happening now. No leader, especially a religious leader, should have the right to question another man’s religion or faith. They are using the Pope as a pawn and they should be ashamed of themselves for doing so, especially when so many lives are involved and when illegal immigration is so rampant. 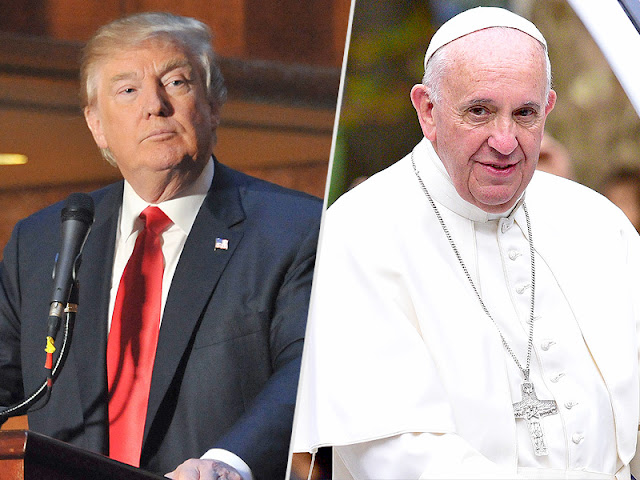 Later, Trump softened his tone, saying "I don't like fighting with the Pope, I like his personality; I like what he represents." And he added that the pontiff was "doing a very good job."

In a tongue in cheek comment in reply, Francis dismissed Trump's accusations:


Thank God he said I was a politician because Aristotle defined the human person as 'animal politicus.' So at least I am a human person, As to whether I am a pawn, well, maybe, I don't know. I'll leave that up to your judgment and that of the people.

Neither man won this exchange. Both of these very outspoken individuals said things that were better left unsaid, especially since the world waits with bated breath for their every pronouncement. Because they are not known for restraining their tongues, they often embarrass their advisers who must try to explain unfortunate comments away, even if these comments are the unvarnished truth.

By questioning Trump's faith the way he did, Francis was also questioning the faith of everyone who endorses Trump's policies. Francis should have questioned only these policies, not the people who espouse them. Trump enjoys a lot of support among Americans. Are all of them not Christians? 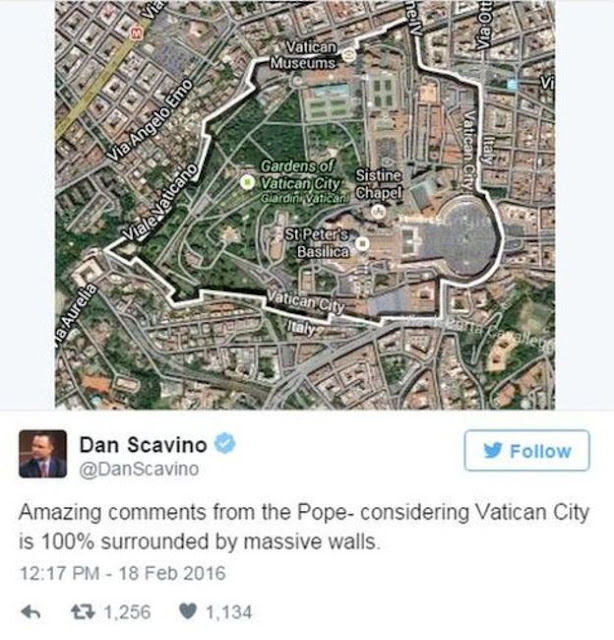 Not true: Vatican City is not completely surrounded by walls since it is open on St. Peter's Square

This is a common error that we all make on occasion: confusing the person with his or her beliefs. We are allowed to condemn someone's beliefs, but we should be careful not to question their self-identification. If Trump calls himself a Christian, that must be taken at face value, at least until his behavior flatly contradicts that. Even then, one must remain cautious, Don't forget, Peter denied Jesus three times, yet Jesus reinstated him and assigned significant duties to him.

We make the same mistake when we accuse mainstream Muslims of refusing to condemn Muslim extremists. These Muslims eagerly condemn ISIS as un-Islamic, yet are often reticent to deny that ISIS members identify themselves as Muslims. They make an important distinction.

Both men backed away from further confrontation, but the damage had been done. Trump risked alienating American Catholics, who constitute 22% of the electorate. Trump's evangelical supporters may not lie Catholics, but he needs the Catholic vote if he is to win the presidency. The Republican party cannot afford to alienate the growing Latino population or cede all of them to the Democrats. 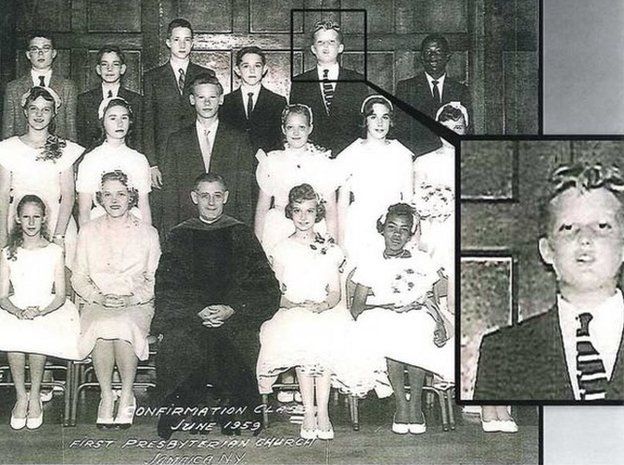 Trump claims to be a Christian, In 2011, he stated his beliefs clearly if somewhat strangely:

His behavior is questionable at times, as well as some personal beliefs. For example, he has also stated quite bluntly: "I think if I do something wrong, I think, I just try and make it right. I don't bring God into that picture. I don't."

Even his proposed ban on Muslims can be understood as an expression of his determination to protect the US:


Until we are able to determine and understand this problem and the dangerous threat it poses, our country cannot be the victims of horrendous attacks by people that believe only in Jihad, and have no sense of reason or respect for human life.

Two of Trump's Republican rivals have criticized the pontiff for his remarks about Trump. Marco Rubio and Jeb Bush, who are both Catholics, have stated that they look to the Pope for spiritual guidance, but not for political direction.

Some evangelical leaders have also questioned the remarks of Pope Francis; Jerry Falwell Jr, the president of Christian Liberty University and a Trump supporter, said that the Pope had gone too far. "Jesus never intended to give instructions to political leaders on how to run a country," he explained. 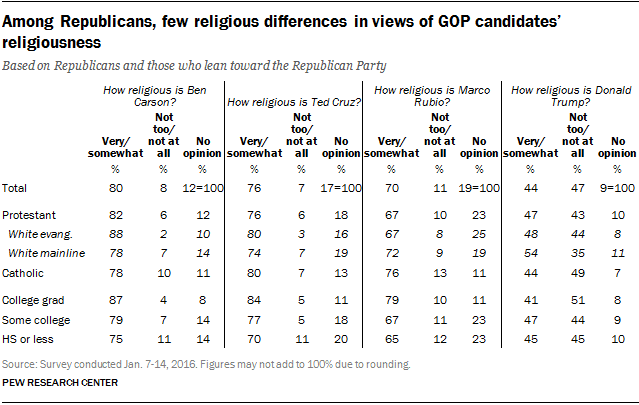 Why did Trump attack the Pope? Trump needed to defend himself against the charge that he is unchristian. That would be the kiss of death in many states that are solidly evangelical and where primaries still need to be held. Even though he knows little about the Bible. he now carries the Bible his mother gave him as a child to campaign rallies in order to burnish his religious credentials.

Is Trump perceived of as religious? A Pew Research Center poll revealed just three-in-ten Americans say Trump is very or somewhat religious, while six-in-ten say Trump is not too religious (22%) or not at all religious (37%).

Being seen as a religious person generally contributes to how a candidate is viewed. For example, among Republican registered voters who view Donald Trump as at least somewhat religious, about three-quarters also say they think he would make for a good or a great president. By contrast, among Republican voters who say Trump is not religious, just 41% think he would be a good or a great president.

According to Gallup, in a strange bit of statistical symmetry, the exact same percentage of Americans (5%) named the billionaire businessman and famously no-fuss Francis as the man they most admired in 2015.

Pope Francis is viewed favorably by many Latino Catholics, especially because of his stance on immigration. Thus, this spat did not hurt him among Catholics. Evangelicals, in contrast, regard his remarks as political interference from a man whom many do not like and some view as the Anti-Christ. Donald Trump probably lost a few Catholic votes, but he did solidify his support among evangelicals who overlook his many excesses and ridiculous comments. 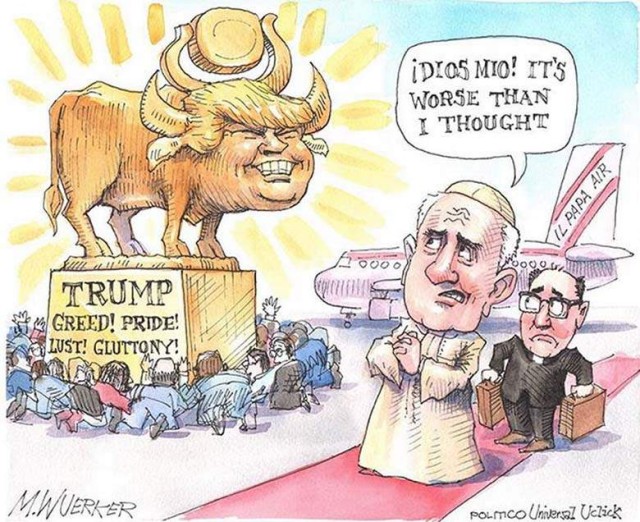 Nevertheless, this exchange does not provide any net benefit to either man. If anything, positions on both sides have hardened. The polarization that typifies the American electorate in 2016 has now found a clearly identified religious expression. How sad!

This probably does not bode well for relations between the Vatican and the White House in the future, especially if Trump should become the next president of the United States. If that happened, Trump may also have a rocky relationship with many other world leaders.

May God preserve us from that potentially catastrophic event!