The Canadian federal election: Who can we trust? 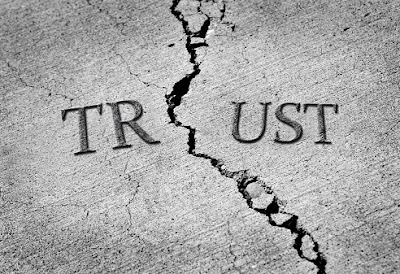 "All politicians are liars!" How often don't we hear this, especially during election campaigns? The cynical among us will wholeheartedly agree; while those who are more cautious will explain that this does not mean all politicians -- just most or, at least, many.

Do you trust politicians? This is always an important question during elections. According to a poll that was taken less than a year ago, politicians are rated as among the least trustworthy professions. Joining them at the bottom are telemarketers, car salespeople, and bloggers (I assume this means professional bloggers, not amateurs like me.)  See chart for ratings of other professions. 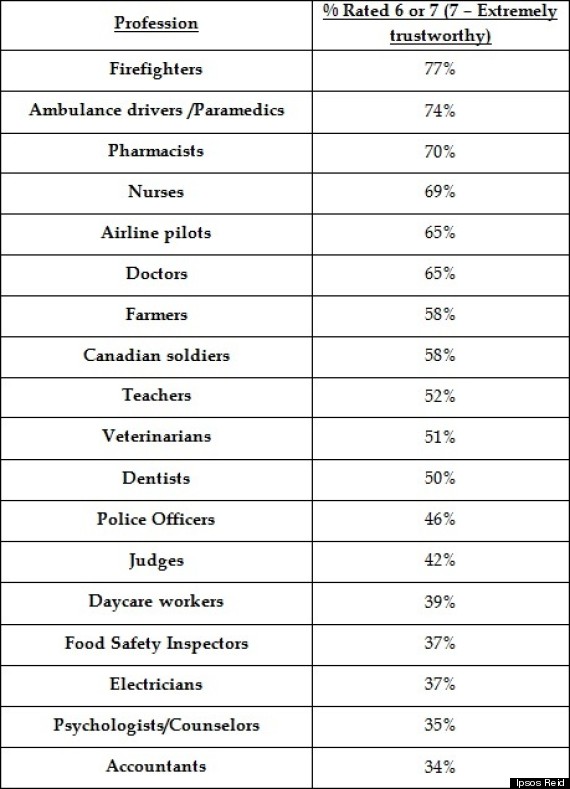 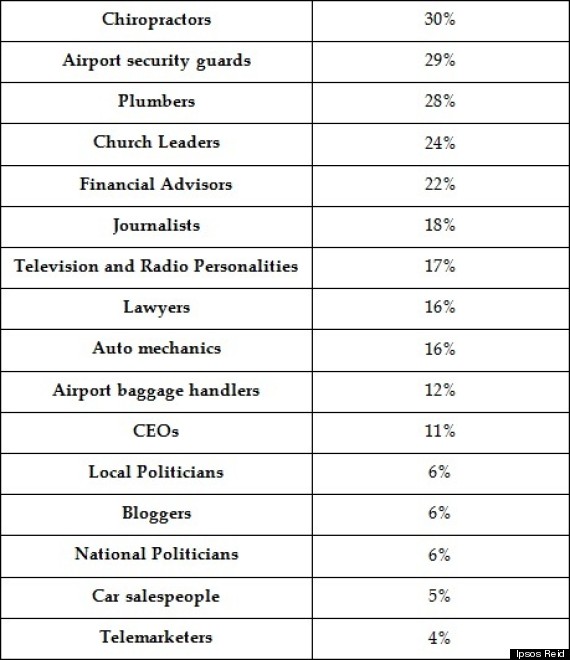 There is an enormous literature, both scholarly and non-scholarly, that deals with the allegations that the mass public is losing confidence in politicians and in many aspects of the political system. This is a critical issue, especially during an election campaign.

It is well-known that scandals can lower public regard for individual politicians and government leaders. What is less known, however, is how scandals influence our attitudes toward institutions and the political process. That is even more serious and is ultimately destructive of democracy. When we no longer trust our institutions, where can we go in order to effect change?

The current election campaign in Canada will be the longest in almost a century, It will also be the most expensive ever, thanks to Stephen Harper's early election call. It also promises to be the dirtiest. American-style attack campaign ads appeared even before the election was called. 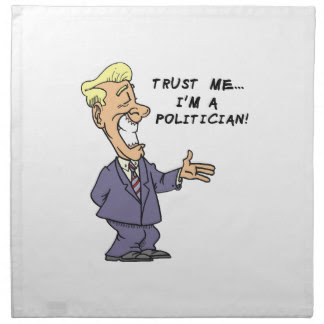 The Conservatives have used ads that repeatedly trumpeted: Justin Trudeau is "just not ready." Unfortunately for Trudeau, if one slings enough mud, some of it is bound to stick. The Liberals have responded with an ad in which Trudeau portrays himself as "ready," but the damage has been done.

The Conservatives have the deepest pockets, which allows Harper to fly everywhere and make lavish promises, although these are conditional upon them being re-elected and producing a balanced budget, something Harper has never yet achieved during his decade in power. All this promised largess, of course, comes courtesy of government funds.

Even before the election was called, the Harper government  had sent out checks to families with children, What was not mentioned clearly enough was that much of this money would be taxed back next year.

Whenever Harper makes public appearances, his audiences are always carefully screened to keep possible dissenters far away. Everything is scripted and tightly managed. Harper is widely acknowledged to be a control freak, His public persona is stiff and formal, with not a hair out of place. 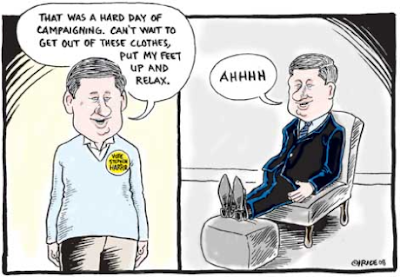 Control is the way he ran the Prime Minister's Office (PMO), as has become crystal clear at the trial of former Conservative Senator Mike Duffy. This trial is running concurrently with the campaign, to the consternation of Harper who cannot avoid questions relating to this trial.

Harper's former chief of staff, Nigel Wright, has tried to explain why he wrote a check for $90,000 dollars to help Duffy repay living and travel expenses that he allegedly owed, Most Canadians have already heard these sordid details, but non-Canadians may need some enlightenment. Hence this brief explanation.

What makes the Duffy trial so intriguing for Canadians but unnerving for Harper is the suggestion that Harper knew about this check all along. He claimed that he did not, but Wright's testimony and some of the volumes of emails that were sent between Wright and the PMO make very clear that some of the most senior staff in the PMO did know, and thus Harper probably knew, Was Harper, therefore, lying?

Many Canadians suspect he was. Even if it shown that Harper did not know because his staff kept him out of the loop, Canadians will still find it hard to accept that this control-freak would not know. The Duffy trial is not yet over, nor is the election campaign.

The Duffy case is the biggest scandal to hit the Conservatives during Harper's term in office. He became prime minister for the first time with the promise of  more transparency in government. His government was noted for being the most opaque ever, as the recent revelations about the PMO demonstrate yet again. 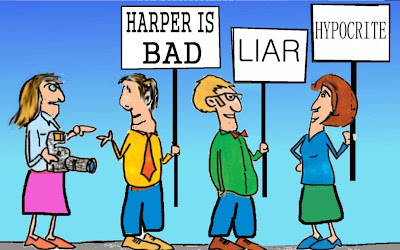 Not that the other main party leaders are entirely virtuous, The Liberals had their sponsorship scandal that Harper capitalized on. But now Harper's sins are the issue, largely because the Conservatives are in power and scandals are mostly associated with those in power. The list is too long for me to recite here; for that, check the literature of the opposition parties.

As Lord Acton famously put it, "Power tends to corrupt, and absolute power corrupts absolutely." To which Acton had added in his letter to Bishop Creighton, "Great men are almost always bad men."

What disturbs me especially about Harper is not just his duplicity or his controlling nature, many other politicians have been accused of the same vices, but that his evangelical Christian faith doesn't seem to play a significant role in his political life. If it did, how could lie so brazenly, much less promote the policies he does? Or does he simply prove the truth of Acton's observation?

Mulcair and Trudeau are Roman Catholics, but I would still hold them to the same high standard. In fact, all politicians should integrate their faith and political life. Then they might become regarded as trustworthy and respected once again. Until that happens, we will continue to believe that politicians are liars.

In this election look for men and women of integrity, people who are honest and trustworthy. These are the ones we should support with our votes. There are such people, but we may have to search for them. Canada needs many people of faith and who are trustworthy. Vote for them! Help them to get elected! 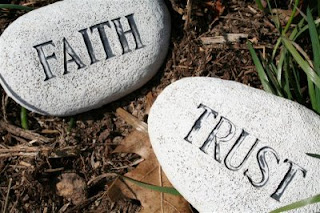