Is the Islamic State really Islamic? 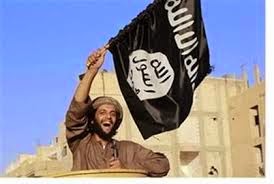 This post was delayed for several days. One reason is my research into the motivation for the recent destruction of Iraq's artifacts. This process led me to modify my ideas and I now offer them, albeit somewhat tentatively, since they are not yet part of mainstream thought at least in North America where the Islamic State, Islam, and terrorism are all equated by most people. I seriously question this equation and I hope to share my thoughts more extensively on this in a further posting.

The Islamic State (IS) continues to destroy Iraq's ancient artifacts. For a while now IS has been methodically demolishing the ancient cultural heritage of Iraq.(see video). If it has its way, it would destroy that heritage elsewhere.as well. What motivated IS to do this? And this raises another pertinent question: by destroying these artifacts is it really Islamic?

IS is not alone in engaging in such a cultural rampage. The Taliban did the same in Afghanistan when they destroyed the enormous Bamiyan Statues of Buddha. There are more examples of this from history, including those involving other religions. But the question is, are they all identical?

This early example of Christian iconoclasm was motivated by their interpretation of the second commandment which forbids the making and worshiping of "graven images," but there were also political factors that led to the elimination of images. The advance of Islam, with its own prohibition of images, also contributed to this development. 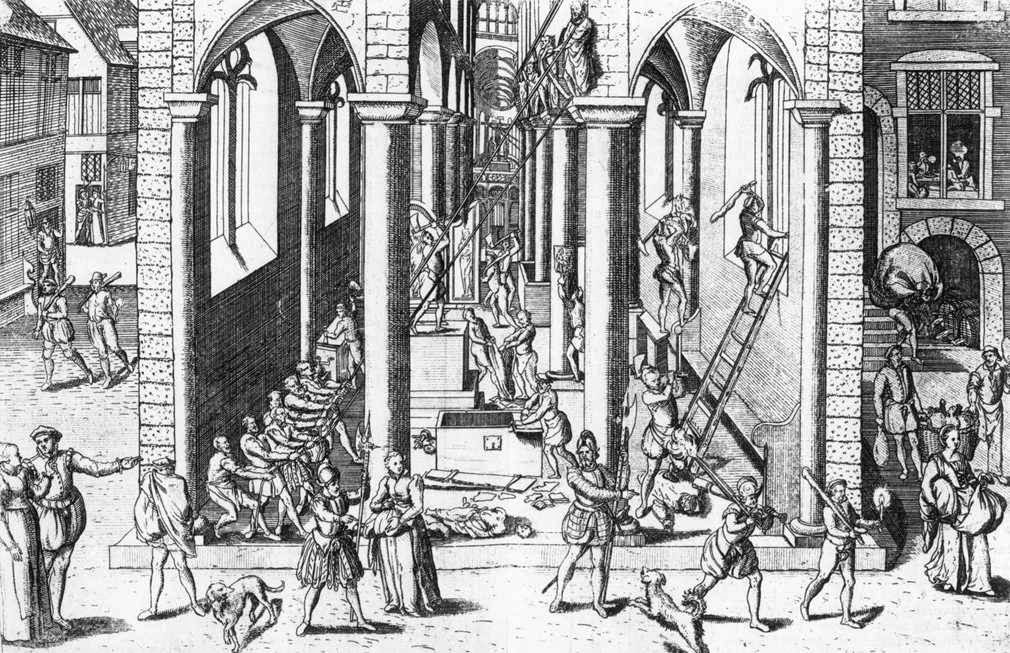 During the Reformation, John Calvin, among others, encouraged the removal of religious images from churches because of the same commandment, although this removal was generally orderly. There were also iconoclastic riots, inspired by the Swiss reformer Huldrych Zwingli, which were more destructive.

Islamic iconoclasm (or more properly, aniconism) is motivated by the prohibition of creating images of sentient living beings, especially those of Allah, the prophet Muhammad and his associates. Some Muslims add that the prohibition extends to the depiction of all humans and animals.

In Saudi Arabia, the destruction of early Islamic heritage sites, including mosques, cemeteries, and tombs, and other religious structures, were the result of a policy to erase any elements that might give rise to practices contrary to the strict Wahhabi creed that is still prevalent in parts of that country.

Yet even these examples (with the possible exception of the destruction of the Library in Alexandria which was local and religiously-motivated) should not be compared with wholesale destruction that IS is perpetrating in the parts of Iraq that it controls, although the Saudi example does anticipate it. But there commercial factors played a leading role, since new hotels and other buildings needed to be built for the many Muslims pilgrims who came every year for the Hajj.

The motivation for IS to destroy these artifacts is not chiefly financial, even though it lost a lot of oil revenue in the current fighting in Iraq. The Taliban and al-Qaeda have resorted to this practice as well as a major source of income. The sale of artifacts can be used to raise funds for the fighting which has suffered some setbacks lately. But money does not explain the destruction of religious shrines, whether Christian, Jewish, or Muslim. 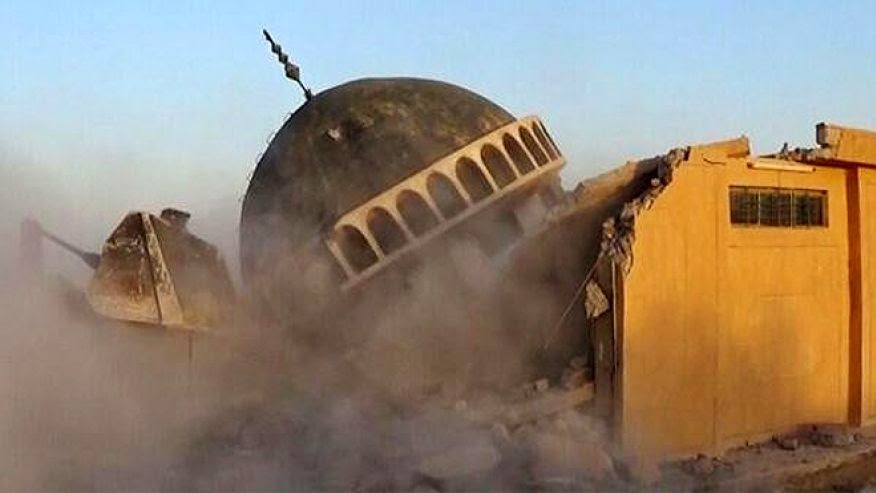 Some have speculated that IS wants to provoke the US into a holy war, but that is extremely unlikely, since the West only offered money to help preserve the statues of Buddha and no further aid.

The primary motivation should be sought in the ideology that drives IS. It is largely political, part of a publicity campaign to grab the religious and political leadership mantle in the Middle East.

Although IS self-identifies itself as Islamic, it is not, as I shall argue more extensively in a future posting. Thus it should not be branded with the label Islamic when it is not recognized as such by many Muslims.

IS indeed presents an Islamic face, but its true roots are found in the alliance between self-proclaimed Caliph Abu Bakr al-Baghdadi and the remnants of Saddam Hussein’s secular Ba’athist regime. It is this alliance that has shaped IS into the monster that the world sees today -- one that destroys ancient artifacts, and even more seriously, executes its enemies in a cold-blooded way that is contrary to Islam. (Watch the video that illustrates this.)

Although Baghadadi clearly presents himself as a Muslim, which is only natural as Caliph, the operational experience of the former Ba'athist senior officers is equally evident in the way the fighting has proceeded thus far. According to one expert, the Ba'athist elements are key and without them IS would not have been able to hold Mosul.

This is a marriage of convenience in which an ostensible religious force is united with a secular or ideological one to such an extent that the result is something which is neither, but instead a new force that shares some of the traits of both, but in which the true Islamic spirit has been lost. 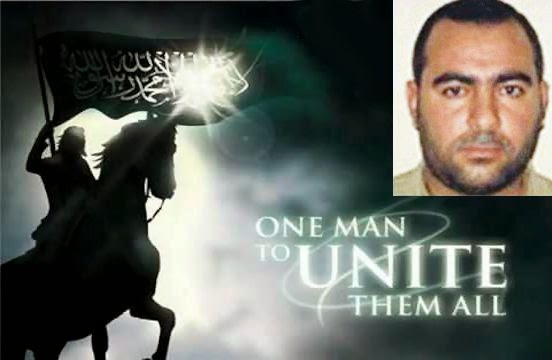 Muslim leaders, whether Sunni or Shia, Salafi or Sufi, conservative or liberal, have almost unanimously condemned and denounced IS not merely as un-Islamic but actively anti-Islamic.The wholesale slaughter of prisoners by IS, although not unknown in the history of Islam, is not true to the Islamic faith, in spite of the protests of many people who know next to nothing about Islam.

The ideology of IS has a religious veneer, but the driving force is secular. The destruction of Iraqi artifacts was motivated not only by a need for funding but especially by the desire to appear Islamic and thus win a following both in the Middle East and overseas.

Although the destruction by IS bears similarities to what other groups had done in Afghanistan and Saudi Arabia, IS did it with a ruthlessness that has become its hallmark, just as the cold-blooded killing of prisoners is. This violence should not be associated automatically with Islam, especially if so many Muslims deny this.

As I shall explain further in another posting, It is not fair to Muslims to equate Islam and terrorism if they themselves deny that equation. Would Christians want their faith to be equated with every form of brutality that takes place in so-called Christian countries?

If many Muslims want nothing to do with IS and reject its ideology completely, then that should warn non-Muslims not to equate Islam and terrorism, and certainly not IS and Muslims who are living in the Western world, as if these men and women are all potential IS-inspired terrorists. 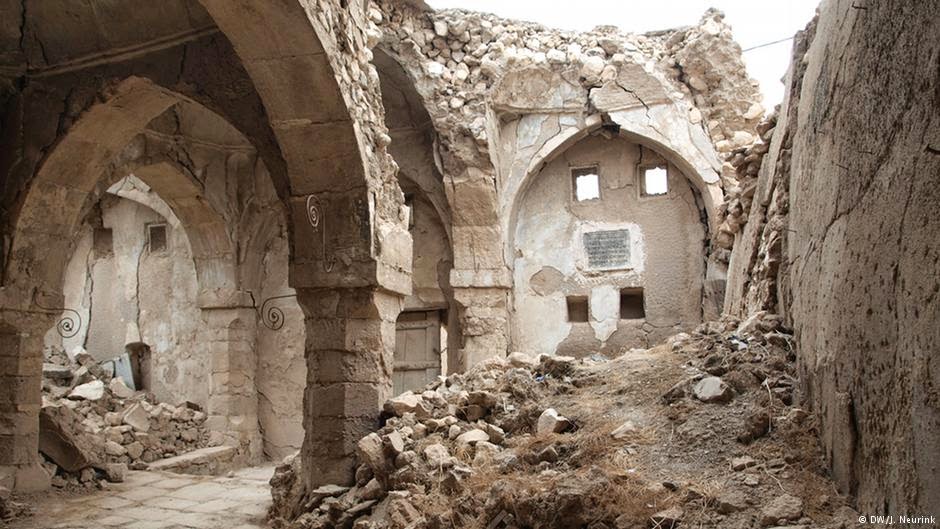 The remains of the last synagogue in Iraq, in Al Qosh with the tomb of the prophet Nahum

Bill C-51 in Canada makes such an assumption. The government has stoked the fear of Islam so much that many Canadians seem willing to sacrifice some of the freedoms for the protection supposedly offered by this bill. Many Canadians, myself included, are protesting it. However, this is a necessary digression from my examination of the motivation of IS.

IS seems to be using the destruction of ancient artifacts in Iraq to establish its credentials as the leader of the Islamic world, both spiritually and politically. Under the guise of religion. it destroys the heritage of Iraq for political reasons.

In many other examples of iconoclasm, the motivation was largely an attempt to protect the purity of the faith. The fear of idolatry was foremost in many of them. But is this also true of IS? Many Muslims would respond in the negative, since for them IS does not truly represent Islam.

Many Westerners reject this denial, but much of this rejection is often based on a lack of knowledge of Islam. Even some experts on Islam support those who claim that IS is an extreme form of Islam, even though many Muslims do not.

It is unreasonable for the West to plead that Muslims condemn the jihadists, and then to reject their insistence that IS is not really Islamic but, in fact, anti-Islamic. To label IS as an extreme form of Islam only helps to feed the Islamophobia that is so prevalent in many Western countries today.

It has taken me a while to digest and then accept the argument of many Muslims. I hope to present this more fully later. As mentioned in my introduction, this has delayed the publication of this post.