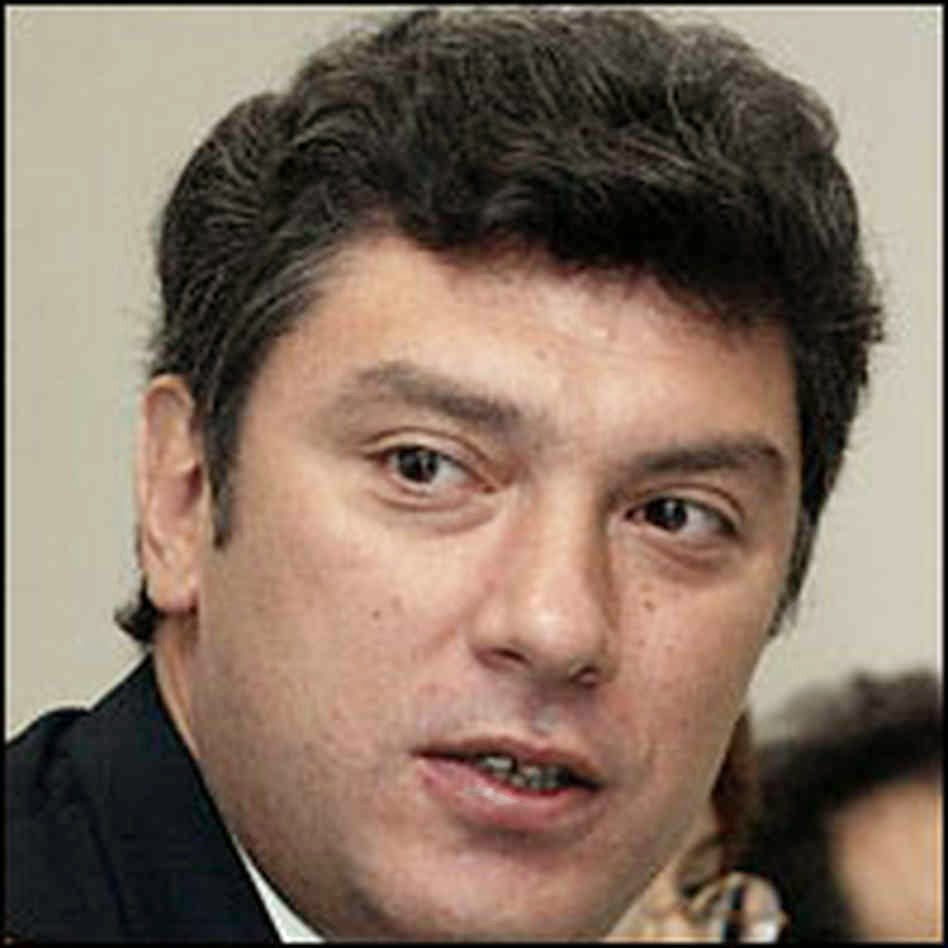 A leading Russian opposition leader, Boris Nemtsov. was cruelly murdered in Moscow. He was shot four times as he was crossing a bridge only steps from the Kremlin, which is probably the most secure place in Russia. He was likely under surveillance before a march planned for Sunday. This suggests the killers were professionals, and were not afraid of detection. Nemtsov is survived by his wife and four children.

The murder of such a prominent political figure has not happened in the decades since the breakup of the Soviet Union, although lesser figures have been killed in the violent atmosphere that is endemic in Russia and has been fostered by President Vladimir Putin. Some think this would not be the last killing of an opposition leader in Russia.


Nemtsov, a star politician in the 1990s who was once seen as a potential successor to Boris Yeltsin, had been marginalized in recent years. He had been preparing for an anti-Kremlin march scheduled for Sunday. Hours before he was killed, he did a radio interview urging people to attend the march, and connecting the country’s economic woes to Putin’s policy in Ukraine.

"The most important reason for the crisis is aggression, which led to sanctions and, in turn, isolation," Nemtsov said. He understood that he, along with everyone else involved in anti-Putin politics, was being pushed to the fringes. "Three years ago, we were an opposition. Now we are no more than dissidents."

Previous to Nemtsov's murder. the last assassination in Moscow was that of Stanislav Markelov, a human-rights lawyer, who, along with the journalist Anastasia Baburova, was killed outside a subway stop in 2009. A few years earlier, in 2006, the renowned journalist Anna Politkovskaya was murdered in her apartment building. 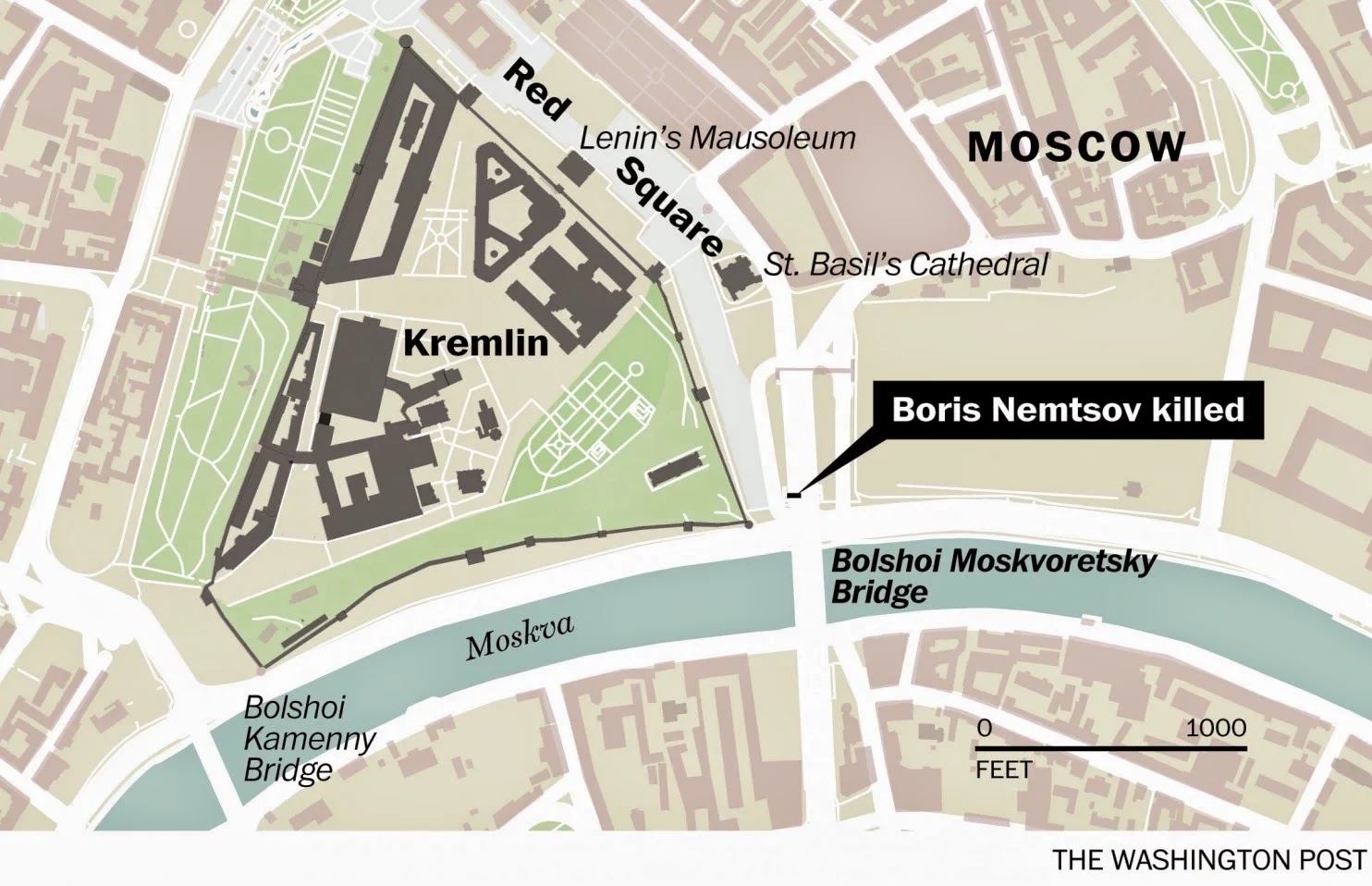 Thus far, there has been no public explanation of why Nemtsov died, but many theories abound. The most likely reason for his violent death is because he was one of Putin's most vocal critics.

Nemtsov has accused Putin of waging a war against Ukraine. He apparently had proof of Russian involvement and was going to publish it. This evidence will now be published posthumously. His opposition to Russia's annexation of the Crimea last year also emphatically made him one of the major enemies of the Kremlin.


Nemtsov has also accused Putin of rampant corruption, claiming that he enjoys a life of immense luxury with personal palaces, yachts and aircraft at his disposal. The Kremlin has repeatedly dismissed these accusations, but other sources claim that Putin is worth as much as 70 billion dollars. Even this amount does not include all the assets he could claim at the end of his presidency through favors he has done for family, friends and associates.

Perhaps the most outlandish theory is that the killing was meant to frame Putin."There is no doubt that Boris Nemtsov’s murder was organised by the agencies outside Russia who are trying to organize a Russian Maidan," according to Sergei Markov, a pro-Kremlin analyst. "The enemies of Putin have killed one of Putin’s strongest critics in order to push the blame on to Putin."

Laying the blame on outside forces is typical of the Putin regime, who have blamed the West for the insurgency in Ukraine, and thus conveniently detract from any connection with Russia. 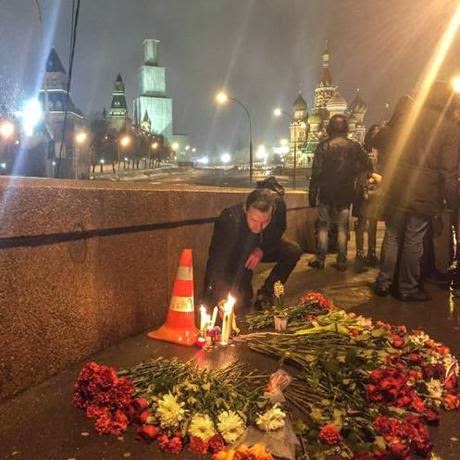 Other theories include forces that were trying to destabilize the political situation in Russia or Islamic extremists who did this in revenge for Nemtsov's stance on the Charlie Hebdo shooting in Paris.

Anatoly Chubais, a businessman, former liberal politician and associate of Nemtsov, said the country was entering a dangerous period: "A demand for hatred and aggression has been created. Several days ago, people were marching with banners saying let’s destroy the fifth column. Today, Nemtsov is killed. Let’s stop and think about what might happen tomorrow. Everyone must stop. All of us. Authorities, opposition, liberals, communists, nationalists … Everyone needs to stop and have a think."

In 2012, Putin warned publicly that his opponents were prepared to murder one of their own so they could blame him for the death. "They are looking for a so-called sacrificial victim among some prominent figures." He added, "They will knock him off, I beg your pardon, and then blame the authorities for that.”

Those close to Nemtsov believe the 55-year-old former deputy prime minister may have been killed by shady nationalist forces reacting to a long propaganda campaign on state-controlled television calling the political opposition traitors.
For a while, a giant poster hung on the side of Moscow’s main bookstore with the face of Nemtsov, among others. "The fifth column: there are strangers among us," it read. The most apocalyptic and vile of Russia’s television hosts, Dmitri Kiselyov took pleasure in naming and insulting members of the so-called "fifth column." He noted, "Putin legalized that term in the political language of Russia." That act of legalization, according to Kiselyov, means that any number of people or factions could have murdered Nemtsov. 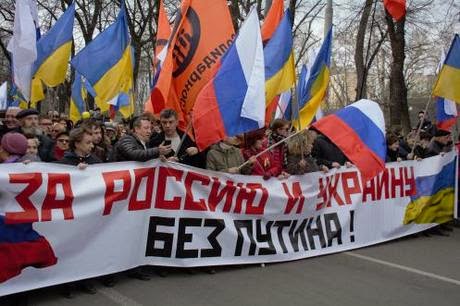 Nemtsov at a rally with a sign saying "Towards a Russia and Ukraine without Putin."

Ten days before his death, Nemtsov admitted that he was afraid Putin could have him killed, but "not that much." He thought that his prominence in the country would protect him. Apparently, it did not.

A few hours after Nemtsov’s death,  another associate, Vladimir Ryzhkov, blamed "the atmosphere of hate that was artificially created" by the state and its supporters, "Anti-liberal propaganda has fostered the sense of mutual hatred in society. What we have is a situation that could detonate at any moment."

"This killing demonstrates to what extent hatred has been legitimized or even sanctioned in Russia. Society was irritated for a long time, but when the hatred comes from TV screens, it makes a big difference," Ryzhkov added.

Some are already asking, if Nemtsov’s death will presage a wave of political purges? In the current climate, almost anything seems possible. Either the authorities would kill someone who poses little real political danger, or they have given rise to a venomous hatred that they can no longer control. 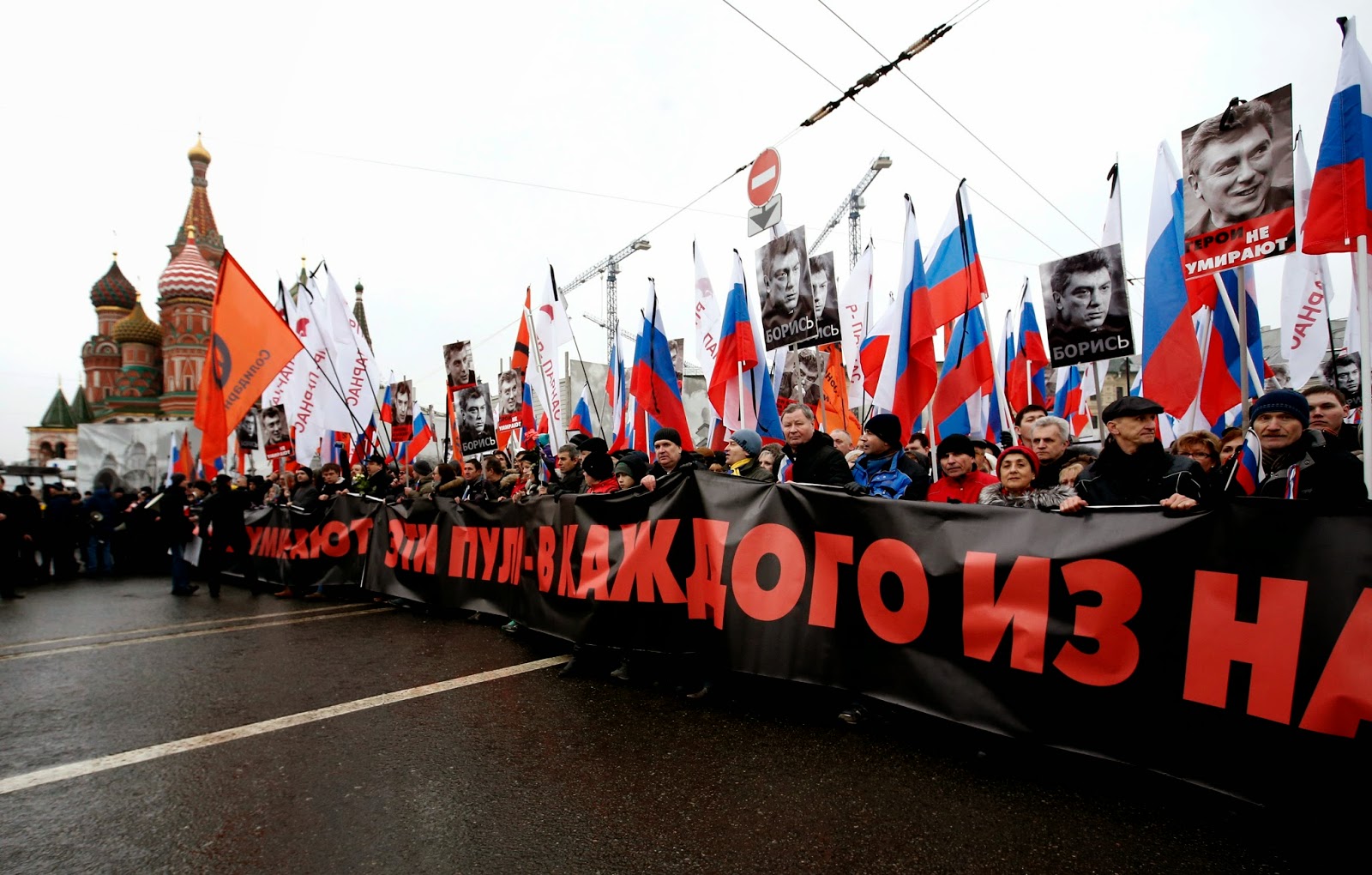 The banner reads, "Heroes never die. Those bullets are for everyone of us."


Nemtsov's murder will not silence the opposition. On the contrary, it may have breathed new life into it. In death this charismatic, Orthodox politician may yet achieve more than he did in a life that was prematurely terminated by four bullets on a Moscow street.

Immense, angry crowds turned out in Moscow Sunday to march through the city in honor of slain Kremlin critic Boris Nemtsov, who was supposed to appear at Sunday's rally protesting Russia’s role in the fighting in Ukraine, but he it was converted into a memorial march. More than 50,000 people marched along the banks of Moskva River under gray skies to the site of his death. Other rallies in honor of Nemtsov took place in at least 15 other Russian cities.

Although I did not personally know Nemtsov, I frequently saw his face on Russian TV, as I did that of some other people whom I have cited, including Chubais and Kiselyov. I am saddened that this prominent opposition figure was so cruelly gunned down near the Kremlin by persons unknown.

It is not my job to assign blame, but I suspect those ultimately responsible for this murder may never be identified. That is the sad state of Putin's Russia, where justice is rare and determined by the rich and powerful. I rejoice that there is a greater Judge, who will dispense justice fairly.