The insanity of war 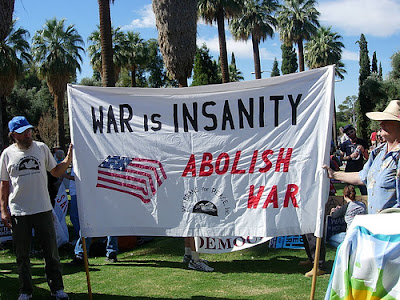 The world once again stands on the brink of a major war. The posturing of North Korea and the United States makes me, and doubtless many other people all over the globe, fearful of what might be in store for us.

Will we wake up one morning in the next few weeks and find out that Seoul has been wiped off the map and that 10,000,000 Koreans have died or been severely injured as a result of a nuclear attack by the North? And, as a further consequence, are we the next to die?

North Korean missiles are already capable of reaching Toronto (which is where I live). Many parts of the US are equally vulnerable. Are we all soon going to experience a nuclear Armaggedon? I sincerely hope not!

War is insane. No rational person, it would seem, wants to engage in war. Conventional war is already catastrophic enough, nuclear war is infinitely more so. The after effects of a nuclear strike will linger for decades or even longer.

The cost of a war in lives lost and property destroyed is only part of the accounting. The wasted resources, both human and material, are part of the equation as well; they could be put to better use. For example, poverty could quickly be eliminated all over the world with the money that is saved from waging wars. 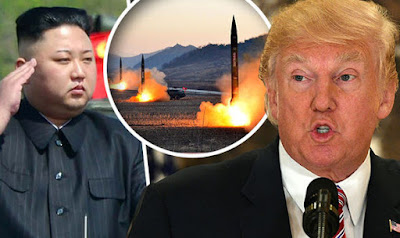 An oft-quoted expression, attributed to Albert Einstein and Benjamin Franklin, among others, is that insanity may be defined as "doing the same thing over and over and expecting different results." One would think that after millennia of war we would stop this insanity. The results are always the same.

Insanity originally meant "the condition of being mentally deranged." In the 19th century, it began to take on a looser sense, "extreme folly or unreasonableness." Today, insanity can be used in both senses. Certainly, the latter interpretation applies to both Kim and Trump.

By discussing the alleged insanity of Kim and Trump I do not mean to imply that only the insane will wage war; war itself is insane, but this insanity is multiplied many times over when people who are possibly insane are involved.

I am not suggesting that both men are insane; rather, I suggest only that both have displayed aberrant behavior at times. I am not a psychiatrist nor have I examined them closely, but I trust the experts who have made such charges. That these strange characters currently head their respective nations should be enough to fill much of the world with fear. 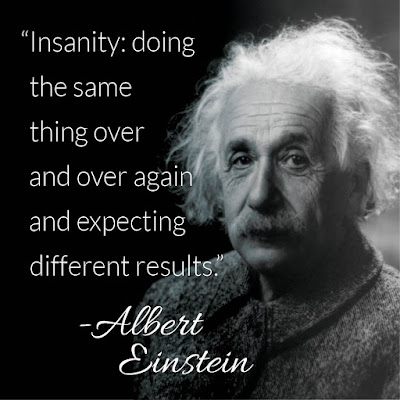 Is a Second Korean War imminent? Or does this mark the beginning of World War III? Journalists have already mapped out several scenarios for this new war on the Korean peninsula. All point out the huge number of deaths and other casualties that will result, but very few dwell on the aftermath, which will probably be as long and as dismal as the quagmire that resulted from the wars in  Iraq and Afghanistan.

Kim may seem crazy, but he is wily as a fox. He does not need a war since it will likely spell the end of his regime, but he does need to stand up to the perceived threat that the US poses to North Korea. The only way to stand up is to possess nuclear weapons and the necessary delivery system.

Trump is in a similar position. He must continue to project the might of the US as the strongest and most powerful nation in the world. As Commander-in-chief, he must ultimately make the decision to go to war with North Korea. But the consequences are terrifying for everyone.

Is he prepared to sacrifice millions of Koreans on both sides of the border between the two Koreas? Will the American populace accept the deaths of thousands, if not millions, of American lives in the war itself and in the aftermath? 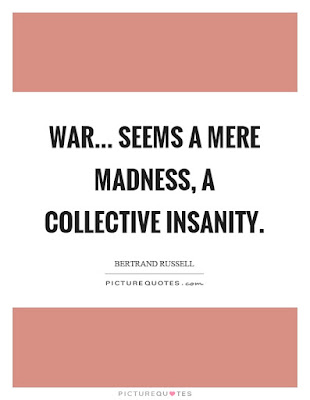 Yet not to go to war if South Korea is threatened by the North, and even more so, if Americans are endangered, would be political suicide for the American president. In both instances, he is damned and might even be judged insane. There is no easy way out of this dilemma.

Diplomacy is vital. It is better to jaw-jaw than to go bang-bang! War is insane, as both Kim and Trump must realize in their more lucid moments. Both may seem crazy, but the insanity of war will not prevent their nations, and probably the rest of the world, from being driven to this Armeggedon.

War is insane. It gets us nowhere. It brings death and destruction not only to the losers but also to the victors. Victory comes at such an enormous cost that it can often be best described as pyrrhic. In the end, no one really wins.

Even the two world wars in the previous century cannot be labeled as unqualified successes. Ostensibly intended to defend democracy, the motivations for these conflicts were not as pure as they might seem on the surface. In addition, both wars laid the seeds for further conflicts in the future.

Because of this, wars will never really end. They must always carry the label, "to be continued." There will always be wars as long as human beings reside on this planet. Wars spring ultimately from the evil that resides in all of us.

That is true of all wars, past, present, and future. The only war that is the exception is the war that God fights in order to restore the creation to the purpose that he intended. That war was won by Christ decisively on the cross on Good Friday in c.33 CE, even if appearances still suggest otherwise.

This is a statement of faith. You may not agree with me about the role of Christ, but you must acknowledge the continuing nature of war. Not only Christians but also many other people of faith insist that there will always be wars until -- as I would put it -- heaven and earth are reunited and God's will is done on earth as it is in heaven.

Until then, there will always be war and so will the insanity that is associated with it. War is insane. There is no justification for war. The Just War theory, as I have written in a previous post (see http://hellemanworld.blogspot.ca/search?q=just+war+theory), is no longer viable if it ever was.

War is insane. It is immoral. It is absurd that it continues until the present moment and will not stop anytime soon. But stop it must. God himself will end it one day. In the meantime, he calls on us to do what we can to end wars in our age. All human beings are created in God's image. Therefore we must love them. We are commanded to love even our enemies. We are not allowed to kill them. All life is sacred to God.

If war is insane, why should it continue? Is there any rational reason or any justification for war? I think not! I hope you agree with me, especially in the face of looming Armageddon.