Why Canadians are concerned about American politics 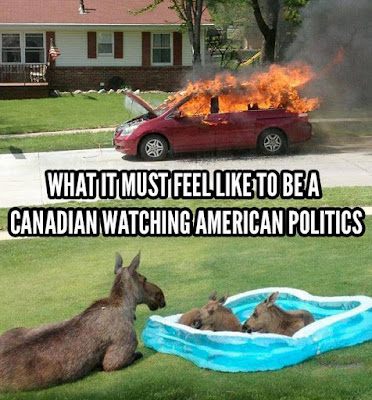 Recently some Facebook "friends" have taken me to task for commenting on American politics. They label me a "lefty" and have told that I have no business discussing American affairs. Trump and gun control are the two topics that rile them especially.

An op-ed article in the Toronto Star similarly argues that "Canadians seem to forget that we don't elect U.S. politicians." True enough, but that doesn't mean that they should not be concerned about what happens south of the border.

What happens in Washington or Las Vegas, and many other places in the U.S. impacts Canadians as much as it does Americans. We -- to switch for a moment to the first person -- know that the U.S. is their country and not ours doesn't negate our involvement in American issues.

Canadians watch American TV programs, read American newspapers, and visit American internet sites. That much of this traffic is one-way is the result of Canada having a much smaller population, approximately the same size as California. Thus we know what is going on in the U.S.

That Americans are often ignorant of anything outside their town, state, or country does not mean that Canadians are equally ignorant. Canadians are affected by what happens in the U.S. and therefore they need to know what is happening there. Former Canadian Prime Minister Pierre Trudeau famously likened Canada's position to its southern neighbor to "a mouse in bed with an elephant." The mouse is in mortal danger whenever the elephant turns.

Let's stop the nonsense of not allowing Canadians to comment on American affairs. For one thing, Canadians and Americans are family. Many Canadians have relatives living south of the border, and if not family, they have friends there.

Whether family or just friends, what happens to one affects the other as well. Blood is thicker than water. But, as happens too often, family or friends do not always agree. Canadians often pride themselves as different from Americans. In fact, this sometimes becomes a defining difference.

Many Canadians are happy that they cannot vote in American elections. That absolves them of any responsibility for electing Donald Trump. They are thankful that this disaster of a president is not their president. They can and do commiserate with Americans who rue the day of his election.

I have shared more than one glass of wine with American friends in order to console them. While Canadians didn't vote for him, they share some responsibility for the election of this incompetent, lying, promiscuous braggart. Trump says he wants to put "America first, " but the whole world knows he is interested only in putting himself first. 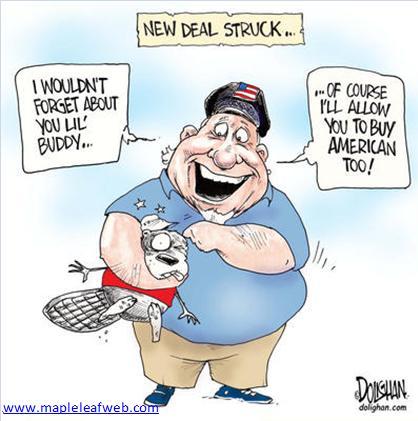 But Canadians are well aware that the same populism that helped to elect Trump exists north of the border as well. They pride themselves on having elected a government led by Justin Trudeau, a youngish prime minister who in many ways is the antithesis of Trump.

But this does not mean that the same populism cannot rear its ugly head in Canada, as it already has in many other countries. Thus Canadians are justified in studying what is happening in the U.S.  and commenting on the phenomenon of populism, especially as exemplified in Trump.

The partisanship that virtually stalemates the political process in the U.S. is not as strong in Canada. Nor is gerrymandering possible since electoral districts in Canada are fixed by independent bodies and generally involve straight lines rather than the contorted figures found in the U.S.

Canadians also ask how Trump could have been elected as president when he lost in the popular vote. The anachronism of the electoral college makes them shake their heads. Lest Canadians get too triumphalistic, under the parliamentary system governments can be elected with less than a majority of the vote. A plurality suffices.

When Canadians look at their own system and compare it with the American one, they admit that both systems have their strengths and weaknesses. But Canadians are still thankful for their own system, in spite of its flaws. The Canadian constitution has many faults, but it does not give Canadians the right to bear arms, as guaranteed by the Second Amendment as it has been interpreted by the U.S. Supreme Court, erroneously in the opinion of Justice Warren Burger. 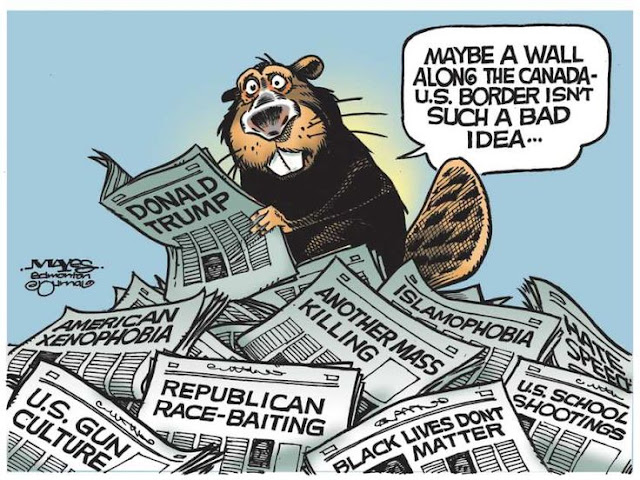 American guns stream across the border, but for most Canadians carrying guns is not an issue. Americans are shocked when at the border their guns are confiscated by Canadian Customs. Open carrying is not allowed anywhere in Canada, even though many Canadians love to hunt.

Canada has a universal health system that many Americans would love to have, but such a system is not possible in the poisonous atmosphere that exists currently in the U.S. The Canadian system has its weakness, but many Canadians list it as one defining aspect of Canada.

I am making these comparisons to illustrate why Canadians look across the border and are unhappy with what they see. Many are grateful that they live in Canada and not in the U.S., especially in the age of Trump. Some Canadians are afraid to visit the U.S. lest they be shot on the street.

Canadians do not have the right to vote in American elections, but if they were able, Trump might never have been elected. Canadians are rightfully concerned about what is happening across the border. They are affected almost as much as many Americans.

Perhaps Canadians are worse off since Canada would not be under the American umbrella if a war breaks out with North Korea. Korean missiles would fly over Canada, but the U.S. does not have to defend Canadians against missiles that are directed at the U.S.  There is no such agreement between the two countries, and many Canadians would not like such an agreement if there were. 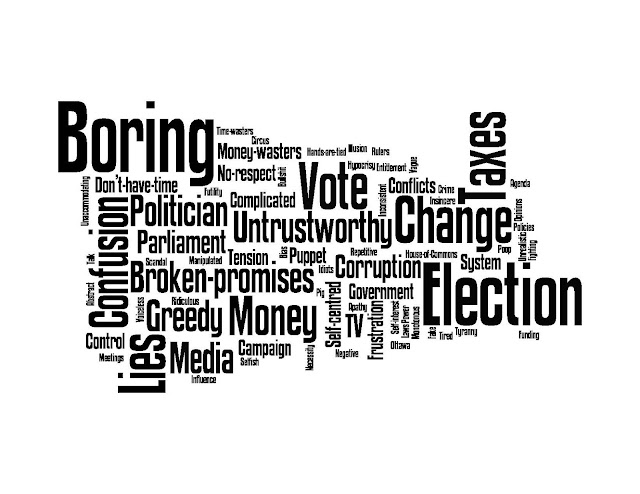 Americans may not always like it, but they must realize that Canadians are family. Families do not always agree with each other, but they remain family. Yet when families live in close proximity to each other, little things can begin to grate. Sometimes these become big things, like Trump and guns.

Familiarity breeds contempt. This helps to explain why Canadians are critical of the U.S. Canadians have a love-hate relationship with their neighbor to the south. They are jealous of its size and wealth, but they reject its exceptionalism and disdain for others which manifests itself as racism among other not-so-endearing qualities.

Not that Canadians do not have problems of their own, but they see some of their problems enlarged in their neighbor. The Bible pictures that as the "log" in one's own eye. Canadians have a fascination with the U.S. Thus they will continue to look south for the foreseeable future.

Canadians will also continue to be concerned about what is happening there. The futures of both countries are closely intertwined. American politics affects the whole world, especially Canada. Remember the story of the mouse and the elephant.

Therefore -- in typical Canadian fashion -- we apologize for staring at the U.S, We do so out of a real concern for Americans and their politics. Sorry!