End of a tyrant. End of tyranny? 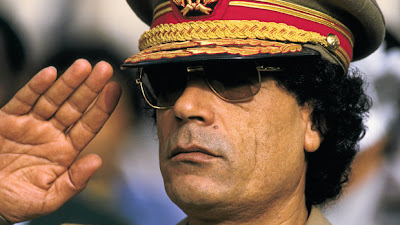 Muammar Gaddafi (1942-2011) is the first ruler in the Middle East to die as a result of the Arab Spring. He may not be the last. That is the hope of many in the world who are still suffering under tyrannical rulers.
To judge by photos and video clips, Libyans are overjoyed at the demise of the man who had ruled them with an iron fist for 42 years. Some may have preferred to see Gaddafi put on trial, but most are relieved that he is gone for good. Thus the transitional government could  finally officially announce the liberation of the country. 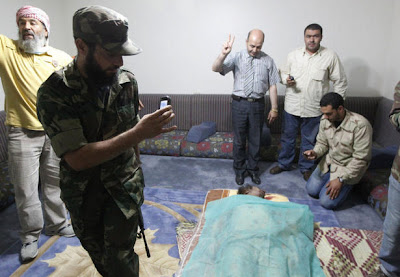 Corpse of Gaddafi stored in a meat locker
While there are still many questions about the manner of his death, Libyans from all walks of life lined up to see his corpse. But, as I am writing this, no decision has been announced yet about the disposition of the body.
The celebration of the liberation of Libya continued for days after his death, with flags and fireworks taking the place of bullets. Libyans marked the end of a tyrant. 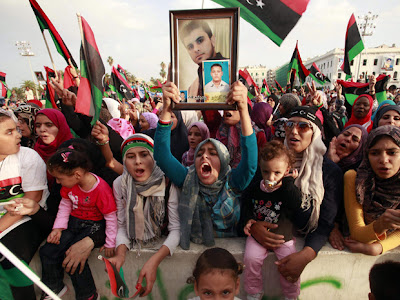 Crowds celebrate their new freedom
What lies ahead for Libya? The future is uncertain. Amid exuberant cries for democracy and rule of law, other more conservative voices can be heard.
Mustafa Abdel Jalil, the leader of the National Transitional Council, took the stand in the celebration on Sunday and promised to uphold Islamic law. "We as a Muslim nation have taken Islamic sharia as the source of legislation, therefore any law that contradicts the principles of Islam is legally nullified," Jalil told the crowd.
This is not to suggest that Islamic law is opposed to democracy, but only that many diverse forces are already coming to the fore, and more will do so as democracy takes root in the new Libya.
Aside from the issue of Islamic law, which may not be fully adopted, there is the unresolved question of tribalism. Gaddafi managed to play the tribes off against each other, but now that he is gone what will happen? 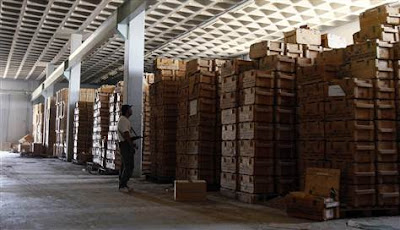 A warehouse filled with captured weapons
Another danger threatens from the huge stocks of weapons that Gaddafi's forces left behind. NATO managed to destroy some of them during the last few months, but much remains that can be used to foment further domestic strife.
"No one seems clear" how many of the estimated 30,000 anti-aircraft rockets, and other stockpiles still remain after six months of pounding by air strikes, according to a U.S. official who has been following the Libyan events.
Democracy is a tender plant that does not thrive in every soil. Tunisia and Egypt, the two countries that bracket Libya, and which both ousted tyrants earlier this year, are prime examples.
The elections this past weekend in Tunisia are a hopeful promise, but the situation in Egypt appears dismal at the moment, with the military there behaving much like the former ruler, Hosni Mubarak, did.
Other tyrants in the Middle East have watched events in Libya closely, but there are no indications that they will step down soon or be removed from power by Western forces. They now know the price they will have to pay if they do lose power. 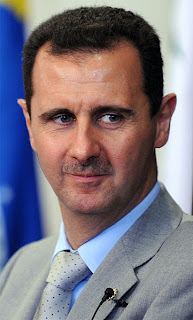 Bashar-al-Assad, President of Syria
The end of one tyrant does not spell the end of tyranny. It would be naive to believe otherwise.
There are many countries in the Middle East and elsewhere that are ruled by tyrants. Some countries have already experienced the first tremors of Arab Spring uprisings: Syria, Bahrain and Yemen.
Will their rulers meet the same fate as Gaddafi? Probably not. At least, not immediately.
Gaddafi played many roles during his life: firebrand, philosopher, clown, tyrant, pariah, statesman, and outlaw, to name just a few. He was treated as a pariah for years after Lockerbie, but Gaddafi reincarnated himself a a statesman after he promised in 2003 to get rid of all weapons of mass destruction.
Soon Western leaders flocked to Libya. Former British prime minister Tony Blair made several visits to Tripoli, where he signed deals on behalf of Shell and BP. The Americans. French, Italians and Canadians, among others, followed suit. 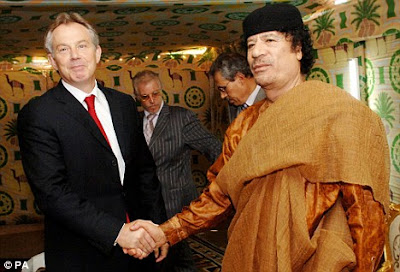 Tony Blair with Gaddafi
Early this year, after his newfound friends deserted him, it was almost inevitable that Gaddafi would end up dead. He had already promised that he would fight to the last bullet.
Ironically, he was found in a hole, much like Saddam Hussein was. Shortly afterwards, Gaddafi was dead.
Western countries had supported him almost to the end. Western leaders did not question his record on human rights, at least not publicly. And Western arm manufacturers had provided whatever arms he wanted.
Although NATO helped the Libyan people regain their freedom, they do not owe a debt of gratitude to NATO for destroying the weapons bought with their own oil money.
Similarly, Western nations have many ties to many tyrannical regimes in the Middle East. As long as these ties continue, these tyrants will remain in power.
Realpolitik by definition trumps morality. With realpolitik tyrants can feel protected from the winds of change, unless they like Gaddafi outlive their usefulness. Then they too might end up like he did. 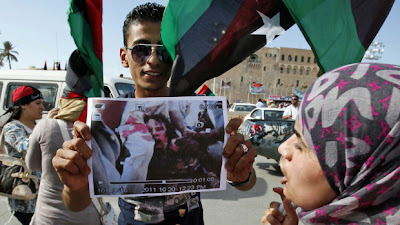 Celebrating the end of Gaddafi
The end of a tyrant like Gaddafi does not mean the end of tyranny. That will require the end of realpolitik. That is unlikely to happen.
Expressed more positively, nations should strive to support the efforts of people everywhere who are trying to escape from under the yoke of tyranny. Then and only then will there be an end to tyranny.
Will this happen someday? I hope so. The wind of the Arab Spring is now blowing throughout the Middle East. The cries for democracy can be heard in many countries. Let us heed these cries and help to eradicate tyranny.
The end of the final tyrant will mark the end of tyranny.