The Conservative government of Canada has posted "For Sale" signs over all of Canada's natural resources. It is not interested in the opinion of Canadians. The throne speech this week demonstrates this. This speech is intended to distract Canadians by appealing to them as mere consumers. The government has thus reduced them to purely economic creatures who only buy and sell, and does not view them as citizens who actually own the resources that their government is disposing of to the highest bidder.

The economic policies of the federal government have failed miserably. The government is also mired in scandals such as in the Senate that led to the prorogation of Parliament. It is now offering Canadians a mess of pottage -- reduced roaming charges, the unbundling of cable-TV packages and a bill of rights for airline passengers are a few of the measures that were mentioned.

But there is no guarantee that a government that prefers deregulation can achieve any of them. That doesn't matter to the government. It looks good on paper. What Canadians really want and need is jobs, but very few jobs will result when many raw materials are exported, as seems to be the governments' intention.

These natural resources are an essential part of Canada. Many resources, such as oil and gas, are quickly being depleted and are irreplaceable. Moreover, when these resources are shipped to other countries, the sorely needed jobs that result from refining them are lost as well.

Historically, Canada was built on its natural resources. Voltaire once described Canada as "a few acres of rock and snow." He may have been a bit off on the size, but those acres have produced fabulous wealth, though often for non-Canadians, from products as diverse as beaver pelts and gold. Today the story is being repeated, but now oil and gas occupy central stage. 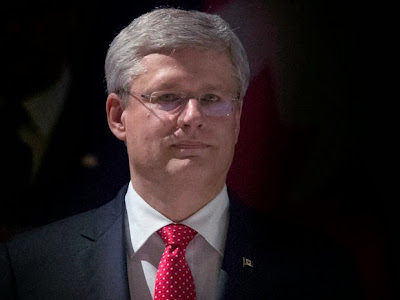 Long before the throne speech the government was busy promoting these resources, but now there is a new urgency to their efforts. Oil and gas are being touted wherever Prime Minister Harper travels. On his recent trip to Malaysia, Petronas, Malaysia's state-owned energy giant, announced that it would invest $35 billion in the Canadian liquefied natural gas industry.This gas will come from the Horn River Basin, a shale deposit in northeastern British Columbia, that holds unconventional natural gas reserves of 78 trillion cubic feet.

The federal government is also pushing the Alberta oil sands through various distribution channels. The Keystone XL Pipeline is a proposed 1,179-mile (1,897 km), 36-inch-diameter crude oil pipeline beginning in Hardisty, Alberta, and extending south to Steele City, Neb. Trans Canada, the company that want to build and operate the pipeline says "it will be the safest and most advanced pipeline operation in North America."

But environmentalists in both the US and Canada disagree. At this point it is not at all clear that President Obama will approve the proposal. He has already said that aside from the environmental dangers, it will produce very few jobs in the US. The same is true of Canada. 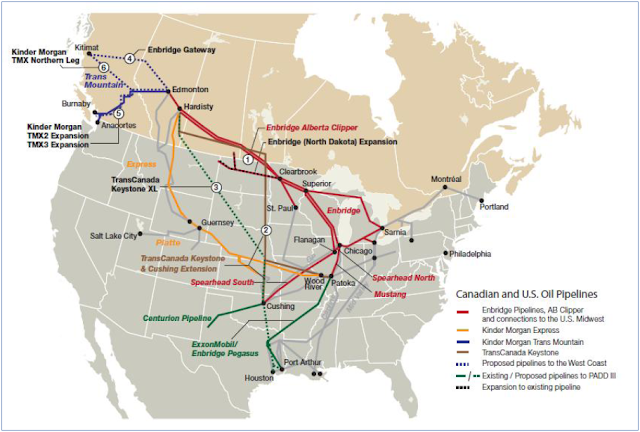 Because of this possibility, other projects have also been planned. The Enbridge Northern Gateway Pipelines Project wants to construct twin pipeline 1,170 km in length, running from Bruderheim, Alberta, to Kitimat, British Columbia. The two pipelines would carry hydrocarbon natural gas condensate and bitumen from the Alberta diluted to a new marine terminal in Kitimat, from where it would be transported to Asian markets by oil tankers. First Nations groups have already stated their opposition not only to this pipeline but also to the threat posed by the oil tankers in the fragile coast of Northern British Columbia.

First Nations groups are also protesting the $5 billion plan of US oil giant Kinder Morgan to expand its Trans Mountain pipeline. This line stretches 1,150 kilometers between Edmonton and terminals around Vancouver and Washington State, which carries heavy and light crude oil, as well as refined products such as gasoline and diesel.

Trans Canada also has plans to convert 3,000 kilometers of the company's existing natural gas pipelines to allow crude oil to be transported from Western Canada to the East. This conversion would reverse the flow of the gas and oil. The company also wants to build 1,400 kilometres of new pipeline from Quebec to Saint John, NB.

Environmentalists are up in arms about this proposal. For example, in Toronto the existing Enbridge 9B pipeline, which runs right through the city, could threaten the nine watersheds of the Greater Toronto area as well as infrastructure such as the subway. The city of Toronto is now making at least 13 demands, including assurances that the company will cover all costs of a major disaster.

Environmental issues have made the government very uncomfortable for many years already. Conservatives in Canada, like their counterparts in the US, are in favor of deregulation. The Lac Megantic rail disaster is just one result of decades of this. More disasters will inevitably follow.

The Conservative federal government has much further than encourage deregulation. Now, as the New York Times editorial board argues, the Harper government wants to "guarantee public ignorance" by muzzling federal scientists. The newspaper argues the Harper Conservatives have tried to restrict publicly financed scientists from sharing information with the public, particularly research into climate change and anything to do with the Alberta tar sands.

There is precedent for this in the US, but that pales in comparison with what is happening in Canada today. The Harper policy seems designed to make ensure that the tar sands project proceeds quietly and without any disruptions.

Chris Turner, a Calgary-based journalist, documents this muzzling in detail in latest book, The War on Science: Muzzled Scientists and Willful Blindness in Stephen Harper's Canada, Turner describes this government as being interested mainly in Canadians as consumers, and only passionate about those parts of Canada it can develop and sell off. 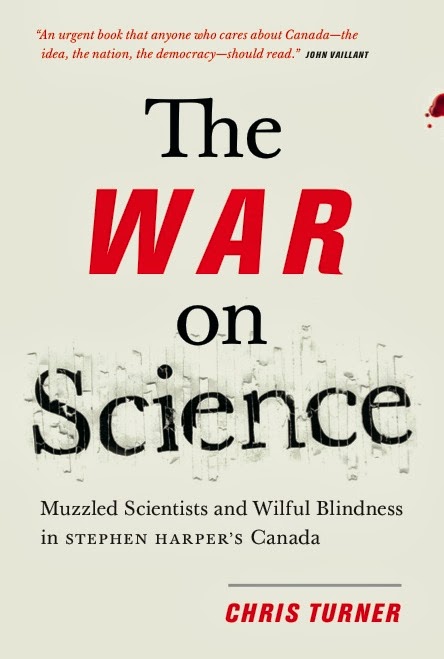 Harper’s true agenda, according to him, has been to dismantle the government’s great traditions of natural science and environmental stewardship, which he claims has until recently made Canada a world leader in both fields.

He cites Christopher Plunkett, a US government spokesperson: “The idea is simple and straightforward: to make Canada the most attractive country in the world for resource investment and development.”

This war on science is part of a sustained campaign to diminish the government’s role in evidence-based policy-making and environmental stewardship. It does this, Turner explains, by "reducing the capacity of the government to gather basic data about the status and health of the environment and Canadian society; shrinking or eliminating government agencies that monitor and analyze that evidence and respond to emergencies; and seizing control of the communications channels by which all of the above report their findings to the Canadian public." 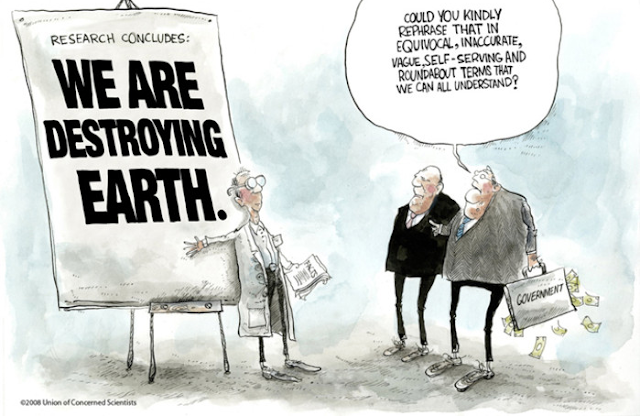 In the book he lists some of the environmental science bodies and programs that the government has eliminated or reduced. These are already well known to those who are concerned about the environment and climate change, thus I will not rehearse them.

The federal government spends $24 million to tout the Alberta oil sands, and even more on an “Economic Action Plan” that is largely non-existent. Yet it wants to muzzle scientists who may deter their plans for selling off natural resources and contradict their stance on climate change.

Harper and his government must assume that many Canadians are stupid and are interested in watching TV and talking on their cellphones. It feeds on a latent anti-intellectualism that is widespread not only in Canada but also elsewhere in the world. The governments treats Canadians as incapable of understanding the issues and thus must be protected from the facts. By muzzling scientists it gives itself the freedom to do whatever it wants, including selling off the resources and not spending money to counter global warming. 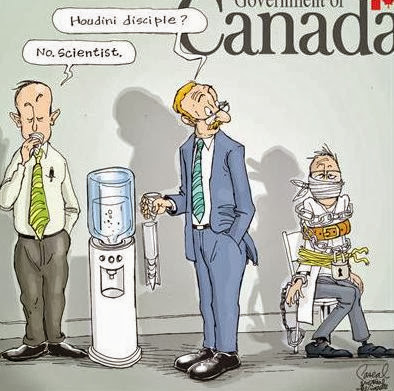 Let those of us who are Canadians speak out and defend our scientists before it is too late. Those who are not Canadians should be concerned as well, because your government can also introduce legislation that will muzzle scientists. All governments are looking for ways to raise money, by selling resources for example, and to cut costs, especially if they involve supposedly contentious matters such as climate change. In both cases, muzzling helps to eliminate protests. Protest is what we must do before it is too late.

Christians everywhere should be especially concerned when governments do not exercise their biblically-mandated responsibility (whether they are aware of this or not) to care for God's creation and not to misuse it by selling it to the highest bidder. The best solution for the oil sands, at least from an environmental point of view, is to leave it in the ground until such time as it can be used in a way that properly honors this mandate.