A one-state or bi-national solution?

Some time ago in a mosque I asked a young Palestinian what he thought about the two-state solution to the Palestinian-Israeli conflict. He immediately dismissed it, stating that he preferred the one-state solution. It is too late for the two-state solution, he explained. When I probed further, he added that many Palestinians agreed with him.
Although the two-state solution is still the official Palestinian position, an increasing number of Palestinians, especially the younger generation, have rejected this option. Of the many reasons they offer, perhaps the most important is that the growth of Jewish settlements in East Jerusalem and the West Bank has reduced the land available for a future Palestinian state to a series of enclaves that will never be viable.
Historically, the one-state solution was proposed as early as 1917. Even in 1948, when Palestine was partitioned and the modern State of Israel was established, there were even Jewish voices that questioned this decision; they would have preferred a bi-national state. This was the original goal of the PLO as well; only later did the PLO support the two-state solution.
After 1999, support for bi-nationalism grew among Palestinians. It become the subject of academic debate. A series of articles argued that the two-state solution was unworkable and the settlements in the West Bank had made it impossible. Since then, many conferences have issued declarations favoring the one-state option.
Support for one-state is apparent even among Israelis. Even though two-thirds of them prefer two states, the rest, divided equally among right- and left-wing voters, favor a single state. Most reject one-state because of the demographic threat posed by the Palestinians who already constitute 20% of the Israeli population. With the return of many Palestinian refugees to an enlarged Israel, Palestinians would soon outnumber Jews. In addition, the birth rate among Palestinians is much higher than among Jewish Israelis. No wonder so many Israelis are opposed.
The two-state solution as proposed in the Oslo Agreement has not led to peace but only to increased violence. Bi-nationalism, on the other hand, can lead to a lasting peace, even if the road will be a tortuous and difficult one.
At this point, I should explain that the one-state option and the bi-national solution, although I have used them together, are not identical. There are probably as many variations of each as there are individual proponents. I prefer to see bi-nationalism as a variant of the single state. But some may argue that bi-nationalism is an expression of the two-state solution. That depends on which variant is chosen and what one calls it.
The Alternative Palestinian Agenda (www.ap-agenda.org) is a well-developed and detailed proposal that envisions two states in a federal union called Palestine-Israel, with Jerusalem as the capital. This city would be a separately administered territory. See two maps below that accompany this proposal. 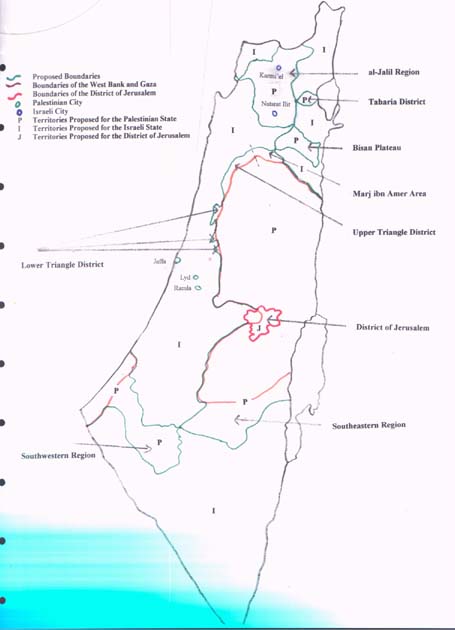 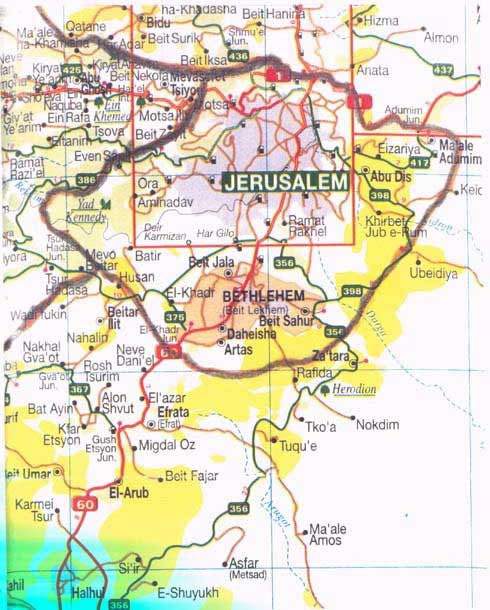 This proposal is definitely bi-national. For this reason, I would prefer to call it two nations in one state. Let me give one example of this from elsewhere. In Canada, the House of Commons approved a motion in November 2006 to declare the Quebecois as a nation.within Canada.
I do not want to debate the merits of the APA proposal now. This is a Palestinian proposal, although there was input from other sources. This proposal and these maps are merely illustrative.
But the merit of the one-state or bi-national solution is that it is based on the de facto situation that exists currently in Palestine. Not only are the territorial enclaves there not contiguous but the sovereignty of the Palestinians is also seriously impaired.
There are numerous articles available online that advocate or criticize the one-state solution. I will not discuss the arguments presented there now, except to note the wide gulf that exists between the Palestinian and Israeli views on this topic.
Although I have been a long-time advocate of the two-state solution, I think it is now appropriate to consider other options. The one-state or bi-national solution is certainly worth our consideration. There are many variants, and one day we may see one of them become reality.
The two-state solution seems to be a zero-sum game. The one-state or bi-national solution may yet become a win-win situation for all concerned. Great sacrifices will be required from both Palestinians and Israelis. But the prize of a lasting and just peace will surely be worth it.