The churches of Turkey: Where are they?

(This post was motivated by my recent trip to Istanbul; it is my reflection on the situation of the
churches in Turkey since, among other things, they are few in number and often not easy to find)

Christianity has a long history in the region that is today termed Turkey. Antioch, where the followers of Jesus were first called "Christians" is located in Turkey. Turkey was where the "Seven Churches of Revelation" were situated. Many Christian saints were born there, including St. Paul. In the centuries that followed countless churches were established throughout the region and it became extensively Christianized.

The first seven ecumenical councils, which are accepted by many churches, were all held in Turkey, many in or near what is today called Istanbul. Nicaea (modern Iznik), where the first and last councils were held, is about 90 km from Istanbul as the crow flies, but 200 km by road.

Three councils (the second, fifth and sixth) were held in Constantinople (in Hagia Sophia church, it seems). The fourth council met in Chalcedon (modern Kadikoy), which lies across the Bosphorus from the city. Only the third council, which is not as widely recognized by all churches, met further away in Ephesus.

For more than a 1000 years the region was a bastion of Christianity. Later it became an equally strong Islamic fortress. Even as late as 1900, Turkey was still 22% Christian. But by the end of that century the number of Christians had declined to 0.21%. Today Turkey is estimated to be about 97% Muslim.

The transition from one religion to the other has been studied extensively, but the reasons for this requires more space than is available in this blog, and now I can only only highlight a few factors that help to explain the long process of decline.

Centuries of doctrinal disputes, which became codified in the ecumenical councils, had weakened these churches already before the ascent of Islam. As the division between the Eastern and Western churches grew the bitterness between them grew as well.

The Crusades laid a foundation of hatred that drove many in the Eastern church into the arms of Islam after the conquest of Byzantium by the Ottomans in 1453. In the Fourth Crusade the crusaders had ravaged the city (1204). This dastardly deed dealt the death blow to any hope of eventually reconciling the Eastern and Western churches; it also left the city open to attack by the Ottoman Turks. 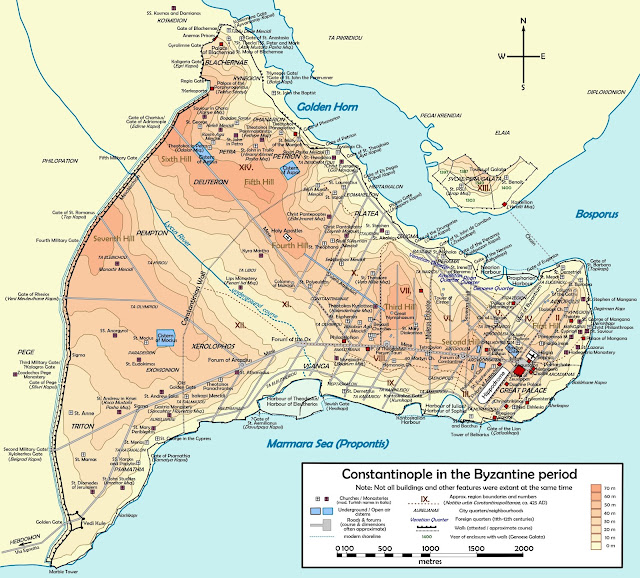 The Crusades left such a legacy of hatred between Muslims and Christians that to this day the word "crusade" still leaves a bad taste in the mouths of Muslims, not only in this region but indeed throughout the Islamic world.

Centuries of warfare with "Christian" Europe drove a further wedge between Muslims and Christians so that conversion to Christianity became tantamount to treason. Even today to be a Turk means to be a Muslim, even if a nominal one.

The disappearance of churches is also due to massive emigration in the case of the Greeks after Turkey became a republic in 1923 and the mass deportation of Armenians after World War I with the collapse of the Ottoman Empire. The Armenians later charged Turkey with genocide, but this is disputed by the Turks. Similarly, the Assyrian church has been persecuted for a long time, which is yet another factor in the decline.

What is indisputable is the steep decline in the number of Christians over many centuries, culminating in the massive drop during the last century. Not only the bitter legacy of the Crusades but also the association of Christians with the imperialistic policies of the West that lasted for centuries as well as with the more recent perceived moral degradation of Western nations contributed to this.

In spite of the official secularism of the Turkish state, Muslims are given preferred status. Mosques are highly subsidized, while churches, with a few minor exceptions for historical reasons, receive no financial support whatsoever.

Moreover, church buildings are often hard to find, with some notable exceptions. They generally do not stick up into the skyline the way mosques do, but are tucked away on side streets or, if near a main street, are not very well marked and set back from the street. 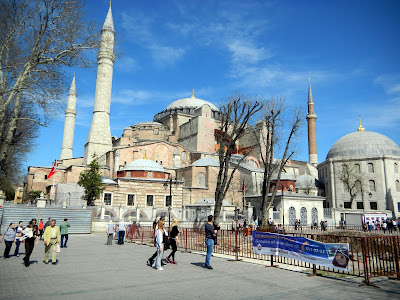 Some ancient churches have been turned into museums. That is what happened to Hagia Sophia, which was first a church, then a mosque, and is now a museum and major tourist attraction.

One of the most interesting churches is found in Cappadocia. It is built into the rocks, and hence called the "Rock Church." I visited that church a few years ago on a previous visit to Turkey. The ancient sites of the "Seven Churches of Revelation" are especially worth a visit. I visited Ephesus on my first trip to Turkey many decades ago.

One Sunday I had a very hard time finding the Anglican Church in Istanbul, while the previous Sunday I serendipitously discovered Union Church, but only because a temporary sign on the main street. I learned that this international congregation meets in the "Dutch chapel" which is part of the Dutch consulate, thus we had to go through a security check to enter the building. 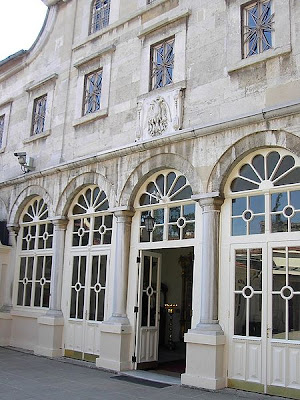 St. George's Church, which is the home of the Greek Ecumenical Patriarchate, is also not easy to find. My daughter, who is Orthodox, wanted to go there, but we found no one we could talk to while we were there. It was almost impossible to find some of the older churches nearby, in spite of our trudging up and down the hilly streets.

In spite of this official neglect of churches, three patriarchates find their home in Turkey. The Ecumenical Patriarchate of Constantinople and the Greek Orthodox Church of Antioch of All the East, located in Antioch on the Orontes, which is a part of Turkey that juts along the coast adjacent to Syria. There is also the Armenian Patriarchate of Constantinople. In spite of losing many members, this is the largest Christian community in Turkey. 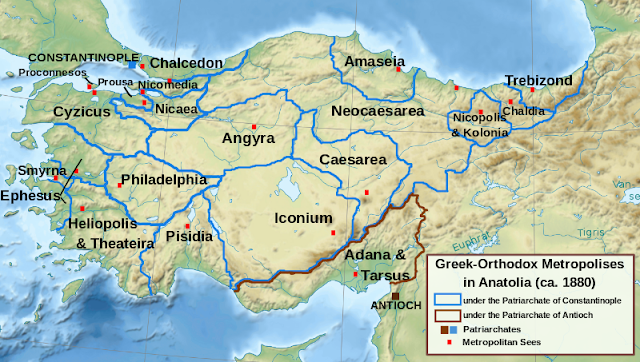 There are many other churches in Turkey, including Roman Catholic, Anglican, and Protestant. Various other Orthodox and Catholic churches can also be found there that use different rites, including Byzantine, Armenian, and Syrian. Diversity seems to make up for numbers.

Although the constitution of Turkey recognizes freedom of religion, churches are still attacked occasionally. In 2006 a Protestant church was attacked with Molotov cocktails, and a year later three Protestants were killed in a Bible publishing house. Yet such attacks are sporadic and not part of an organized campaign.

The churches of Turkey have not entirely disappeared, but the numbers of Christians have been greatly diminished. The reasons are many; I have only scratched the surface in explaining the decline of the churches. The Church of Jesus Christ will never disappear entirely, thus I do not worry too much about the fate of the churches in Turkey. They may be hard to find, but they are still there. For that I am grateful.