(This post is significantly more personal than previously; it also involves my son's wedding in Istanbul) 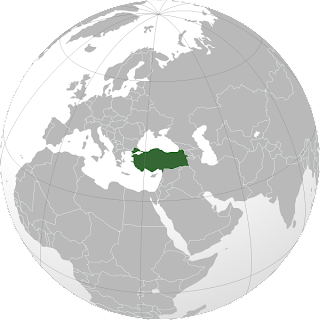 For two weeks I traveled almost daily from Asia to Europe and back again on the same day. Istanbul is one of the few place in the world where two continents meet near a major city. This amazing city is the third largest in the world with an official population of 14 million, but many Turks claim it is closer to 18 million, if not 19. It makes Toronto, Canada's largest city and the third largest in North America, look puny.

About 35% of the people of this enormous city live on the Asian side. This is where my family and I stayed to be near our son with his new bride, who is Turkish. We were there for the wedding. However, in order to visit many of the tourist attractions, most which are on the European side, we had to cross the Bosphorus by bridge or ferry, most often the latter. That is always a delightful experience.

The population of Turkey is about 80 million, and is officially 99.8% Muslim, mostly Sunni, although this percentage is disputed by many Kurds and some Turks. There only a few Jews and Christians left in Turkey. This is where Paul went first on many of his missionary journeys. Today most churches have disappeared as have many of the Christians. Mosques are visible everywhere, but churches and synagogues are often tucked away and hard to find. 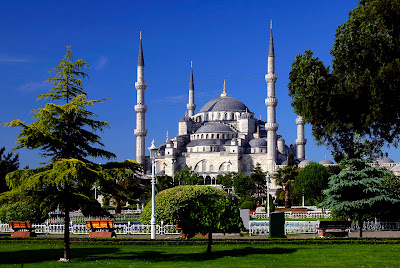 Istanbul is where East meets West. The same is true of Turkey in general, but it is especially true of Istanbul. We have been in Turkey several times and have witnessed remarkable progress every time. Istanbul is a truly European city, with typical small streets, too many cars, and the resultant horrendous traffic, but it is also an Asian city that has a truly oriental flavor. Both can be found on each side of the Bosphorus.

Expensive boutiques and restaurants that can match any in London, Paris or New York compete with the tiny shops that are typical all over Asia. Both types of establishments can be found in or near Taksim, the premiere shopping district of Istanbul. The prices of most items in most stores are equal to the European and North American prices. Fuel or petrol cost twice as much as in Canada.

Istanbul has been tossed to and fro between empires that have eastern or western roots. What we see today is simply the latest expression of several millennia of this. Now this city is the commercial capital of modern Turkey, but until recently it was the political capital as well, as under the Byzantine and Ottoman empires which were many times larger than Turkey is today. Mustafa Kemal Ataturk (meaning "Father of the Turks"), the father of modern Turkey, who studied western thinking, was influenced by laicite, the strict separation of church and state practiced in France. He wanted to curtail the influence of religion in the new state. He did manage to eliminate the Caliphate, which posed a competing seat of power that was a legacy from the Ottoman empire.

But Ataturk was not successful in eradicating religion. On the contrary, religion is alive and well in Turkey today as is illustrated by the multitude of mosques. These are subsidized by the state, and for many years the state even provided sermons for the Friday prayers.

Ataturk promoted modern dress for men, but did not legislate it for women. His wife often appeared in public with her head covered in accordance with Islamic tradition. Today the state has tried to eliminate such head coverings, but without success.

On our latest trip to Turkey we have noticed more women with scarves that ever before.  Our son has also noticed this at the universities. We have seen many women in burkahs in every part of the city, not only the parts where conservative Muslims live. Yet most women, particularly the young, dress in western fashion. 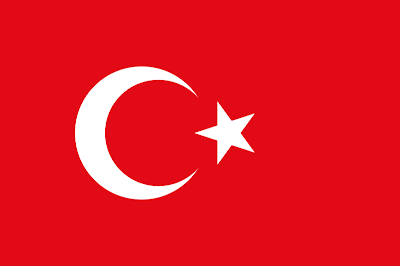 The mildly Islamist party that currently rules Turkey may have contributed to this change in dress. Secularism is still the official government policy, but the influence of Islam seems to be growing, unless the mode of dress is only a minor accommodation on the part of the government. As Ataturk discovered, religion is not easily eradicated.

Regardless of how one interprets these changes, they are all signs that eastern and western thoughts and practices have met and continued to meet, sometimes conflicting with one another. Istanbul is one of the primary places where such meetings takes place.

Admittedly, these meetings occur everywhere in the world, at least where peoples from the East and the West live in close proximity, but Istanbul is where they have met for millennia and continue to meet today. There are strong geographic, historical, philosophical, and many other reasons for stressing the role of Istanbul.

This meeting is what gives this city its exotic character. People from every part of the globe readily feel at home and can savor foods that delight the palate but do not add pounds. Obesity seems much less common there than it is in many western countries. 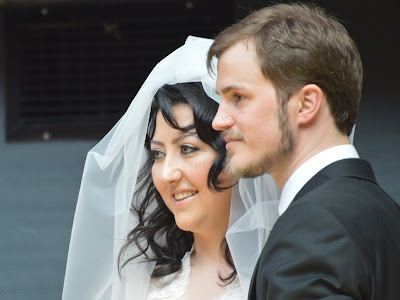 Now we can experience the meeting of East and West in our own family ever since our son, David, was united in marriage to Manolya Anul, whose own heritage is not only Turkish but includes Egyptian as well. We are pleased to welcome her into our family and proud of the way these two parts of the world can meet in this wonderful couple. We pray that God may richly bless their marriage.