The "terrorization" of life 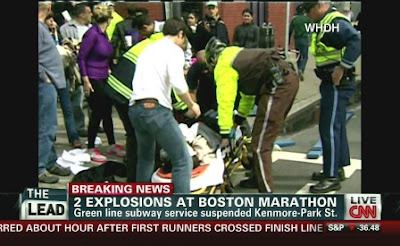 Life has become "terrorized," or so it seems. By that I mean that our lives today are increasingly shaped by fear. The Boston bombings completed a circle that began with 9/11, when we became afraid to go to work; intensified with Newtown, when we became afraid to send our children to school; and increased even more in Aurora, Colorado, which made us afraid for a while to go to movie theaters.

All this has now culminated in Boston, where sporting events, which are the ultimate form of relaxation and entertainment, became fearful places. Terror now seemingly reigns everywhere. Yet we should not let that disturb us unduly. We must not let those fears dominate us and rob us of the pleasures of life.

The world changed on 9/11. Perhaps not as dramatically as some pundits claim, but the effects now affect each of us every day, and not only when we fly. I have noticed this change, as you have too, no doubt. Many years ago I enjoyed flying, even with three small children in tow, but no longer. Today flying is a pain in the you know where, and not only because of the smaller seats (I am still about the same size as I was then).

Recently, on my return from Istanbul, I was subjected to four security checks before I was allowed to board the plane. Everyone who has flown since 9/11 is familiar with the routine, but it doesn't get any easier, except that the US now permits knives of a certain maximum length, which to me is a backward step. 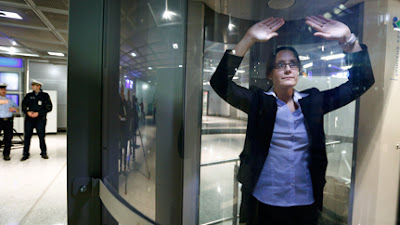 Security checks are found everywhere, not only at airports. In the US, government buildings now have metal detectors. In Nigeria, hand wands are increasingly common in many churches. In Istanbul, a church that meets in the Dutch Consulate has the walk-through kind, and requires inspection of all bags and purses. Some businesses in that city now have the complete set-up, including x-ray machines, as at an airport.

The good news at Canadian airports is that the government is changing the software of the machines that do a full body scan. Now only a stick image will appear, instead of the revealing images that many people found to be an invasion of privacy, and even pornographic. Similarly, the American government has ordered new machines that are less intrusive.

Now, after Boston, security checks have been instituted at sporting events. According to reports, it seems that most people accept this new requirement, but I find it troublesome. Where will this stop? If churches, stadiums and arenas have mandated such checks, will that bring about peace of mind? Hardly.

Fear is rampant everywhere. Boston completed the circle by adding an element of fear to even the most relaxing and entertaining events. These would seem to be the last places where people might expect to be attacked. Some people are now increasingly reluctant to get out of bed for fear of what may happen that day. That should not be. 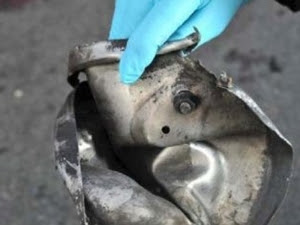 These security measures may help to reduce our anxiety somewhat, but they do not address fully the fears that all of us have not only when we fly but even when we want to be entertained or to worship God. If hiding is a common reaction to fear, where can we hide today? Nowhere it seems. Even people's beds are no longer safe, as the residents of the town of West, Texas, discovered after a fertilizer plant there exploded.

While I am not suggesting that all these security measures be eliminated entirely, they should be reduced. Additional security measures would not have prevented the Boston bombings. The police had checked the area where the bombs exploded only a few hours before. Security checks alone are not the answer.

We need to eliminate many of the fears we have. Some are incapacitating; others are real and help to protect us. Thus we need to differentiate between different kinds of fear. In Nigeria. I felt that the security measures were perhaps overdone, even if the Islamist threat is constant.

Better than machines is the security that comes from knowing the people around us. Churches by their very nature are communities where people know each other. It should be relatively easy to identify strangers who may have hostile intentions. That would be more useful than metal detectors. 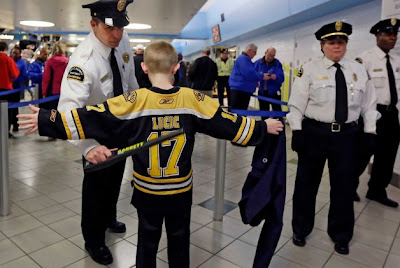 Security was tight at Boston-Buffalo game soon after the bombings

At sporting events that is, admittedly, much more difficult. Yet, as the Boston bombings illustrate, security measures can only go so far. They are always incomplete, unless we want to turn every sporting site into a secure fortress, which is impossible because of the massive numbers of people involved.

We need to learn to live with a certain measure of fear, otherwise we will be unable to get out of bed at all. But the fearfulness created by all the security apparatus that we experience almost daily could be alleviated by reducing the pervasiveness of these machines. However, such apparatus once installed is difficult to remove.

Unfortunately, those who even breathe the word removal are dismissed as being soft on terrorism. Yet I seriously question the ubiquity of these machines. They do not make me, and I suspect others would agree, feel any safer. On the contrary, they tend to raise my blood pressure, especially whenever I walk through the machine and the buzzer still goes off, even though I have removed every metal object I could find.

As I am writing this, the revelations about the death of one suspect and a massive manhunt for the other may help reduce the anxiety of the citizens of Boston, although they will all feel much safer when he is captured -- alive, everyone hopes, so that he can explain their motivation. The suspects are reportedly two brothers from Chechnya, who are both legal residents in the US. But it is difficult, if not impossible, for the government to protect everyone from such home-grown terrorists who are intent on creating mayhem.

The two suspects went on a crime spree, which began with a robbery at a convenience store, and quickly snowballed into a deadly rampage that took the life of an MIT campus police officer and left one suspect dead after a Wild West-like shootout in the streets of Watertown, a suburb of Boston. The remaining suspect is apparently on foot; thus the governor ordered all public transportation shut down and taxis off the streets.

Other than such immediate measures, what more can the government do? Additional security apparatus will not help in such cases. Too often such additional measures suggest closing the proverbial barn door after the horse has escaped. That may make people feel safer for a short while, but in the long run it does not provide protection from terrorists such as those allegedly responsible for the Boston bombings.

We should not let these bombings unhinge us and keep us from enjoying life. We must not permit our lives to become terrorized. Thus we must not give in to the fears that others have induced in us. If that happens, the terrorists who plant bombs and attack us in other ways will have won. Then they will have achieved their goal. We must never allow that to happen.

The Bible teaches an important lesson in 1 John 4:18: "There is no fear in love. But perfect love drives out fear."  Let us love one another and cast out those fears.