Nigeria's security problems: how to stop the ongoing violence

We had barely left the airport in Abuja when we were stopped at a military checkpoint. This was to be the first of many as we drove the more than 300 kilometers to Jos. This time we were waved on, but that did not happen every time.

As we approached the plateau where Jos is located, we were asked at one checkpoint to open our "boot" (the British term for trunk). The soldier pointed to a duffle bag containing food that a missionary colleague had asked us to bring to Nigeria for her. He was very suspicious, since it resembled military kit except for the ropes reinforcing the bag, but we assured him that the contents posed no danger to anyone.

Once we arrived on the plateau, which averages about 4000 feet above sea level, we were stopped six or seven times in the first ten kilometers. Most of the time we were waved through, but we thought at that rate, if there were many more delays, it would take all day to arrive at our destination.

These checkpoints are the Nigerian government's response to Boko Haram, the terrorist organization that wants to establish sharia law throughout the northern and central parts of the country, as well as drive out all Christians. I have written about Boko Haram previously; check here for more details about this organization.

The government is enforcing stringent security measures that are intended to protect the population from the attacks of Boko Haram. The checkpoints are only one example of the measures that have been taken. They consist of barriers made up of many layers of cement bags, hardened by the rain, blocking each lane, so that drivers are forced to weave around them. Soldiers stop the traffic and question the drivers of any vehicles they deem suspicious. 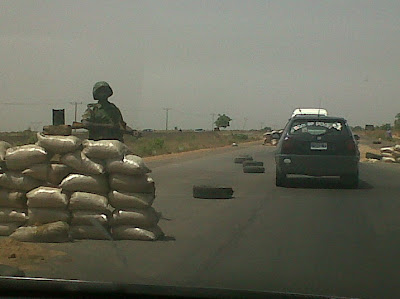 Needless to say, traffic can back up while vehicles navigate the roadblock. Most are waved through, but some are stopped for closer inspection. The soldiers appear quite professional for the most part, as are the checkpoints, which are a far cry from the ones we experienced in the decade since we first arrived here.

At that time, some checkpoints were operated by criminals who only wanted to extort funds from motorists. They often used nail boards to reinforce their demands. At that time too, the government often looked the other way and solders may have colluded with these criminal elements. Military checkpoints often consisted of trees thrown hastily across the road. These were temporary and could easily be removed.

The soldiers now want to prevent bombs being brought into population centers. For several years Boko Haram has used car bombs to attack churches and government buildings. Even if these checkpoints are unable to stop all bombers, as a series of recent bombings proves, they assure people that the government is doing its best to protect them.

In addition to the checkpoints, the government now insists that all cars be parked park several hundred feet from churches, and even allow vehicles to park on the main roads if necessary. This measure is to prevent car bombers from driving into church buildings, which has happened repeatedly throughout the north, and also in Jos where many missions have their headquarters and where churches abound.

Many churches also require everyone to submit to inspection by metal detection wands, in order to prevent suicide bombers from entering the buildings. This has happened occasionally in recent years as well. 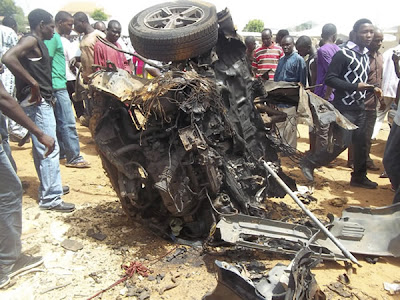 Imagine if such measures were required in churches in North America. People would probably not tolerate that, but Nigerians are remarkably complacent about these measures, which are seen as necessary for their protection. As a result, the trip to church that used to take only twenty minutes has now become an hour.

Some school and government buildings are additionally protected by concrete barriers that make them resemble American embassies. This measure is again intended against car bombers.

At the University of Jos, where I taught for six years, all students and staff must now carry identity cards around their necks as a security measure. Fortunately, I still had my card since people are not allowed to enter the campus without it.

These defensive security measures are understandable, and indeed necessary under the circumstances, in order to help protect the population from violent attacks by Boko Haram. But the government has also implemented offensive measures that have been severely criticized not only by Boko Haram but also by human rights groups such as Amnesty International.

A recent report by Amnesty International accused the Nigerian security forces of numerous human rights violations. The government immediately denied the allegations made in the report. 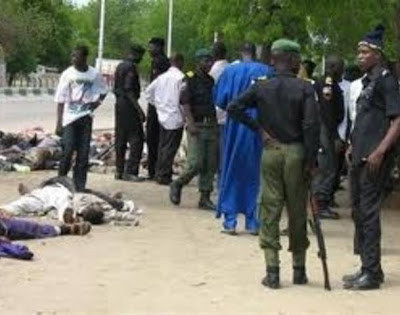 Newspapers here reported that only a week earlier Nigerian soldiers attacked an entire neighborhood in Maiduguri in northeastern Nigeria, killing 30 civilians and burning scores of homes and businesses. The soldiers initially claimed all the slain were Boko Haram.

The residents of Maiduguri already resented the military’s checkpoints and the treatment of the city as virtual occupied territory. After the massacre, many openly demanded that the military be withdrawn from the city, saying they were causing more violence than they were solving.

The government has denied the reports of these killings. And it defended its offensive actions as necessary in order to protect the general population. It even claimed that the security forces were winning the war against Boko Haram, and pointed to the peace overtures that Boko Haram is now offering.

Violence only breeds more violence. Such killings only serve to recruit more people for Boko Haram. The military are unable to win the hearts and minds of Muslims in the north, which is ultimately the only way to end this cycle of violence.

The military option of violent action should be excluded. Defensive measures are necessary and defensible, but not the violence that the government has been accused of. 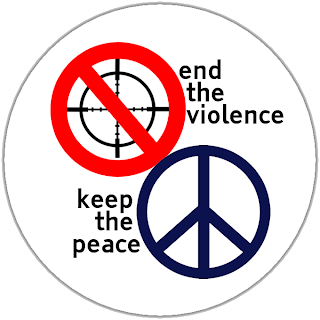 As I have written previously, I no longer subscribe to the just war theory. Active non-violence is the only viable option for me, as I also informed my doctoral student who is writing a thesis on Bishop Desmond Tutu of South Africa, who has been an advocate of active non-violence there for many decades. This student is one of the reasons.why I am in Nigeria for a few weeks.

As irritating as all these security measures are, I can understand why the government has implemented them. What I refuse to accept, however, are the human rights violations that the security forces are accused of. Even the wholesale slaughter perpetrated by Boko Haram in past years does not justify such actions.

Immediately after the first riots in Jos, which started four days before September 11, 2001, many Christians said they no longer wanted to turn the other cheek as they had done repeatedly in the past. Instead, from then on they would return tit-for-tat. Even pastors preached this message from their pulpits.

But such a response is not biblical and thus not acceptable, yet echoes of it are heard everywhere today. I, for one, am willing to accept the inconvenience of innumerable checkpoints, but I draw the line at the use of violence in response to attacks even by groups such as Boko Haram.

As I said earlier, violence only breeds more violence. This cycle of violence must end once and for all.