Must we vote for the lesser of two evils? 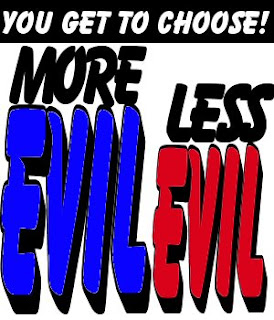 I cannot get the upcoming US elections out of my head. I had hoped to be able to write a new post on some overseas topic, but these elections keep impinging themselves on my mind. It does not help that the media are filled with election news. Next week, when I am in Nigeria for a short visit with some students. I hope to get a new perspective on the world, although there too people will be paying close attention to what is happening on November 6. Maybe after the elections are over! Or maybe not!

The last few weeks several people have told me that when they vote, they often choose what they call "the lesser of two evils." This seems to be a common problem, but this year it appears to be worse than most.

What they seem to imply is that politics is evil, although I am sure that is not their intention. But this comment does make me reflect on how difficult it is to vote meaningfully in today's highly partisan context.

When I heard the same claim made in the past, I was not convinced that such a choice should be necessary. I was younger then. There was a lot discussion about having to vote for the lesser of two evils, but this was said in order to justify the establishment of a Christian political party that would eliminate the problem.

I questioned this perceived wisdom at the time. I argued that political candidates should not be preferred just because they are Christians or belong to a Christian political party. It is possible that one might disagree with their policies. This was my experience in the Netherlands. It is true in Canada as well, where Christian parties also exist, although I have never voted for them. 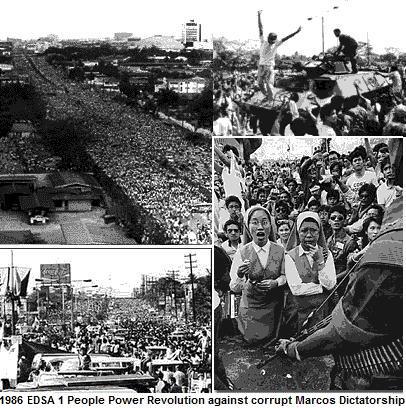 Today I feel even more strongly about this issue, especially after my experience in the Philippines during the People Power Revolution in 1986. This followed a highly disputed election in which President Marcos used fraudulent methods to have himself declared the victor over Corazon Aquino, whom he had dismissed as a "mere housewife."

I was present both when the Batasang Pambansa, the national assembly, examined the much-disputed ballots and when the revolution ensued. Soon after it began, I was on the highway that separated the two military camps. Later I went inside Camp Crame, where I had led Bible studies with some political prisoners. There I met the coup leaders. During the revolt the only room I was not allowed into was the "war room" where they met to formulate strategy.

Cardinal Sin went on the radio at the very beginning and urged Filipinos to support the coup leaders huddled inside Camp Crame. I joined my Filipino friends as they flocked to the highway at his urging. He described what was happening as a struggle between "the children of light and the children of darkness." I agreed.

If I had been able to vote in that election, I would have voted for Aquino. Her weaknesses later became very evident, but they were nothing compared to the crimes that Marcos perpetrated. Here the choice was clear; there was no question of choosing between the lesser of two evils. Filipinos chose the side of the angels.

Admittedly, the choice in most elections is not as clear as it was in the Philippines. I have voted in elections in two countries: the Netherlands, where I was born and later lived as a graduate student, and Canada, where I am a naturalized citizen. And I have witnessed elections in many more countries where I happened to be living and working.

Indeed, in many elections the choice is not easy, but to describe it as choosing between two evils suggests a rather negative view of reality. It is one that dismisses the goodness of God's creation, and sees only the evil that followed the fall into sin. Perhaps I am being unfair to those who use such language, but bear with me. It has caused me reflect on the significance of this phrase and what lies behind it. 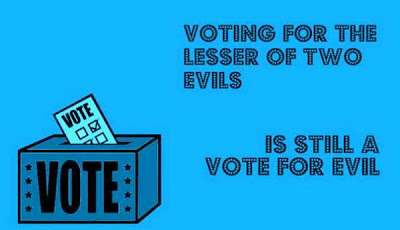 If we dismiss the goodness of creation, where can we discern God's redemptive work in Christ? Where is a vision of God's grace? Because grace is always present, nothing and no one falls outside the orbit of grace.

Thus some evidence of grace can still be seen even in a very depraved person. His mother, for example, will continue to love him, even if others find that almost impossible. Thus I ask myself: Why do some people only see the evil that people do and not the good?

This is a brief theological reflection that not everyone will necessarily agree with. But we ought to look at what is good in people and not just what is bad. Yet I do admit that, like most of us, I have to struggle against a tendency to do the opposite.

The same preference ought to apply in the realm of ideas, which is what we should concern ourselves with when we talk about politics, and therefore not whether we like candidate x, because she has a warm, bubbly personality, or despise candidate y because he is an adulterer.

We should not label political ideas as inherently good or bad. Whether they are good or not depends on context. A policy can be good in one jurisdiction or period of time, but not in another. Not every political idea can be labelled as evil. In fact, there are many good ideas that are touted by groups that some of us might reject.

I prefer to look for what ideas people have in common, and what I can learn from them. In some cases that can be very difficult. Even the Tea Party, which I happen to disagree with for the most part, does have some good points that are easily overlooked. I have mentioned one in a previous post. 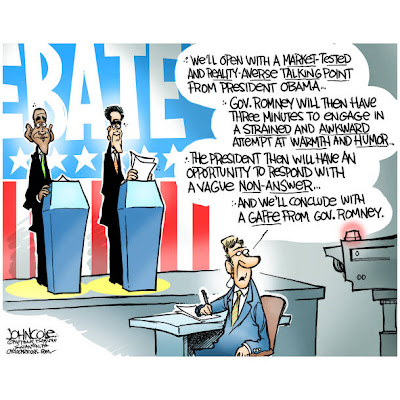 In the presidential election this year, both candidates have obvious weaknesses. It is hard to hide them when these weaknesses are exposed relentlessly day by day by the media. What is worse, they are caricatured in attack ads that are not only degrading but even border on slander. These ads should not be permitted.

Such negativity feeds the attitude that dismisses politics, and therefore all politicians, as evil, so that all people can do is choose the least of many evils. I find that attitude unchristian. People of every religious persuasion will probably agree that this attitude is unbecoming of their faith as well.

So, let us refrain from talking about "the lesser of two evils." I would prefer to say that I will vote for the best person, someone who espouses the best ideas. As I wrote last time, my preference in this election is Obama, even if I cannot vote for him.

While it is true that Obama has not delivered on many of the promises he made four years ago, let us never forget that he was blocked by a bitterly partisan Congress. Romney often mentions the bipartisan spirit that existed when he was governor in Massachusetts, but that same spirit is no longer possible in what is now a fifty-fifty nation, nor it is likely to return any time soon. But then Romney may have used rose-colored glasses when looking at the past.

Romney has also become a victim as well of this partisanship. First, he had to win the nomination by swinging in the direction of the Tea Party, but then he had to move to the middle to attract moderate voters in order to win the election. Hence his flip flopping. If he becomes president, gridlock will continue, and may get worse. 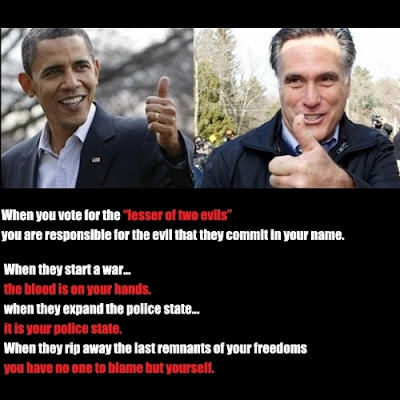 Politics in Canada is also becoming increasingly partisan. This is fed by a number of politicians at the federal, provincial and local levels who are partisan by nature. I deplore this development.

Today the world needs politicians who can rise above such partisanship and, instead, help build bridges with the opposition for the common good. Unfortunately, I do not see that happening very often.

Those of us who are largely spectators in politics can do our part by ridding ourselves of our own partisan spirit. One way to do that is to stop dividing the world into "us" and "them," especially in the area of politics.

At least in Canada, we do not have to register as voters who support a particular political party. That helps, but more is needed to make politics more enjoyable instead of the blood sport it has become.

After November 6, I can safely predict that half the American nation will be overjoyed and the other half will be angry and hurt. But there is little that can be done at this moment to prevent that. This partisanship may, in fact, get even worse, especially if Romney were to win the popular vote but lose in the electoral college.

What we can do is rid ourselves forever of the attitude that dismisses politics as something inherently evil. This attitude is probably unintentional or even unconscious, but it is nevertheless real. It stems from a world-view that regards the whole world as evil, and some parts are even considered irredeemable. 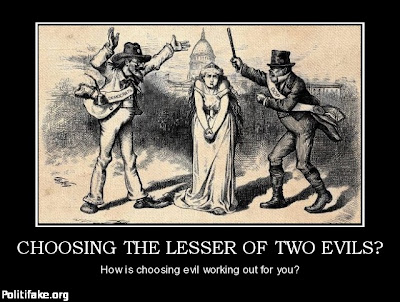 As I have already mentioned, those who say they are choosing the lesser of two evils when they vote may not necessarily have such a worldview. It may be just the language they use, but it would be better if they said they want to vote for the best person.

What concerns me especially is the degree of partisanship today. One way to tackle it is to encourage people to look examine what is good in each candidate and the platform that each espouses. But that is hardly possible in the toxic political atmosphere today.

One important step is the elimination of all attack ads. These ads are largely funded by Super PACS that, as a result of a January 2010 decision of the US Supreme Court, are now allowed unlimited spending on behalf of political candidates. In this election that funding has already passed two billion dollars. That is a record.

This ruling is yet another example free speech run amok in the US. It will not be easy to overturn that very controversial decision. But the attack ads need to go.

Many mothers admonish their children by saying, "If you can't say anything nice about someone, don't say anything at all." That is a wise piece of advice that all candidates and their supporters should heed. Maybe then we will be able to see the good there is in each of them and on that basis vote for the best person, and not the lesser of two evils.