Why I endorse Obama 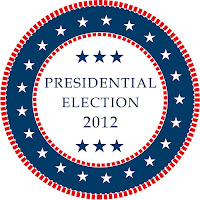 It is too bad that Canadians are not allowed to vote in American elections. If they could, President Obama would probably win by a landslide.

A recent poll of the bosses of small businesses in Canada revealed that a sizable majority (69 %) chose Obama as being better for business than Romney (21 %), which contrasts sharply from what a similar poll of their counterparts in the US shows.

The other day I watched the second presidential debate with a roomful of Canadians, although one has dual citizenship because she was born in the US. Except for her, none of us can vote on November 6, but all of us watched the debate avidly and, I must admit, everyone cheered for Obama. 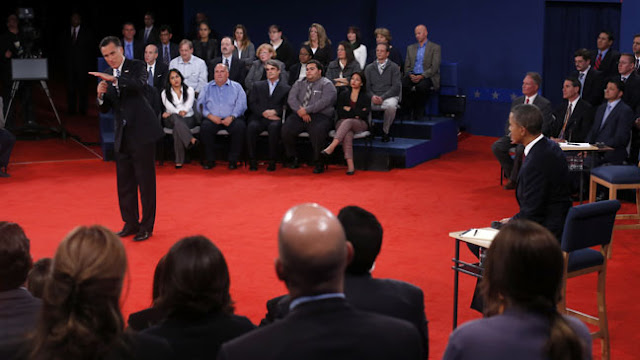 The whole world will be affected by whoever will be president after this election. Not only are American foreign policies vitally important to much of the world but the influence of American domestic legislation is also felt far beyond America's borders. Let me give just one example.

A few years ago, shortly after I boarded a Dutch plane in Amsterdam that was flying to Toronto and did not involve flying over US territory, I was shocked to hear this announcement: "The Department of Homeland Security requires . . . " This is a blatant case of extra-territoriality that no other country enjoys.

The whole world is collectively holding its breath awaiting the results of the election. In most capitals, with the notable exception of Jerusalem, there will be a huge relief if Obama is reelected. Governor Romney has made himself a laughing stock in many countries early in this campaign.

Since then he has not done much to demonstrate his expertise in foreign affairs, although we will see what he says in the final debate. The policies that he has announced thus far have not done much to improve his image in the rest of the world. Those policies, of course, were largely for domestic consumption.

Canada is becoming increasingly polarized politically, partly due to ideologies that have spread across the border from the US. In addition, Canada is now well on the way to losing its democracy due to legislative practices that are common south of the border, such as adding items to bills for the sake of expediency. 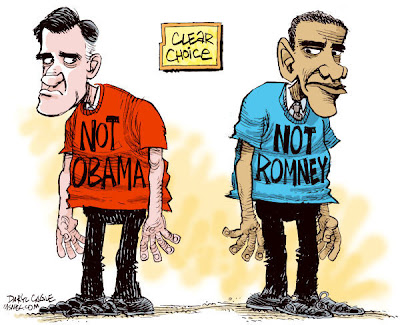 In the tradition of newspapers endorsing political candidates, I want to use my blog to offer an endorsement of Obama. I am under no illusion that this will make a difference. A few may cheer it, but others probably will condemn it as interference in American affairs.

But, as I have already argued, this election will affect the whole world. Thus the whole world should be able to speak out about whom they would prefer as president of the USA.

I have watched all the debates thus far and have listened carefully to the candidates. Quite frankly, I was dismayed by the vitriol. These men are not just political opponents, they despise each other.

I am also dismayed by the anger displayed by ordinary Americans who are polarized as never before. This is frightening and worrisome at the same time. Democrats and Republicans seem to despise each other the same way that the nominees do.

On one side is the current president who is a man of great personal integrity, but has been far too timid in his first term, partly because he was stymied in his efforts by his opponents but also because he squandered the opportunity at the beginning of the term to make far-reaching changes.

On the other one finds a candidate who hides inconvenient facts, refuses to be specific about his policies, and behaves as a political chameleon. Will the real Romney please stand up! 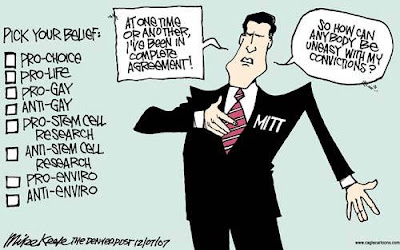 Obama has weaknesses as president, but this office is almost impossible. His new grey hairs testify to that. Yet, from a Canadian perspective, there is much to admire in him. However, he is also misunderstood.

He is not a Marxist, as some Americans claim. The chief legacy of his first term, Obama care, is a watered-down version of the universal health care that Canadians can rightly be proud of. If Obama is a Marxist, I hate to think what Canadians are.

Romney, sad to say, is a chronic liar, whose "binder full of women" is not only laughable but it also totally misrepresents what he accomplished on behalf of women while he was the governor of Massachusetts.

I can also cite his belated explanation that the "47 percent" he mentioned in his infamous May speech does not accurately represent his views, since he wants to be president of 100 percent of the American people. This is typical of the flip-flops for which he is noted. 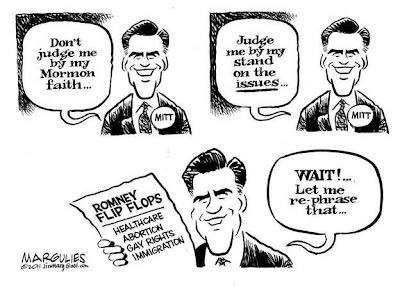 Romney is, in fact, the candidate of  "the 1 percent" made famous during last year's Occupy movement who described themselves as "the 99 percent." The Tea Party movement has not wholly endorsed Romney, but the super-rich, the ".01 percent," have and they are the chief financiers of his campaign.

They are the people, of course, who will benefit most from Romney's proposed tax cuts, while the middle-class, as always, will have to pay for the shortfall in the budget. Romney's math simply does not add up, as Obama pointed out repeatedly during the second debate. Hence Romney's refusal to be specific about which programs and subsidies he will cut when he becomes president. That would be political suicide.

The Tea Party people, because of their small government ideology, are very angry with Obama, but many of them are sufficiently concerned about social justice to see through Romney's rhetoric and his specious move to the right during the primaries, as well as his further move back to the center during the first debate.

The Tea Party movement is powerful and has helped to elect many representatives to Congress. Paul Ryan is their man on the ticket, yet Ryan too refuses to put specific plans on the table. The Republican campaign is directed by those who see government as being of the rich, by the rich and for the rich.

Obama would side with "the 99 percent," but this movement is now largely dormant after, literally, being swept off the streets by those who possess that power. This movement is far from dead, however. 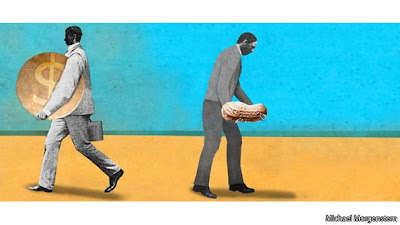 The inequities that the Occupy movement pointed out then are now being trumpeted by The Economist in a 19-page report that discusses the social, economic and political challenges that such inequities pose for the whole world.

The Occupy movement raised concerns that are not popular with those who control much of the economy and the government. But the wealthy who squelched the movement read The Economist regularly. Their response to this report will be interesting.

Unfortunately, the solutions that are proposed in the report are inadequate, but they at least begin to address the concerns of the Occupy movement. Ironically, this report may help to awaken this sleeping giant.

Regular readers of this blog will know what my stance is on many of the issues that I have discussed. Thus, if I could vote, that my vote would be for Obama should not be surprising. Or, more precisely, it would be a vote against Romney and everything he represents politically. 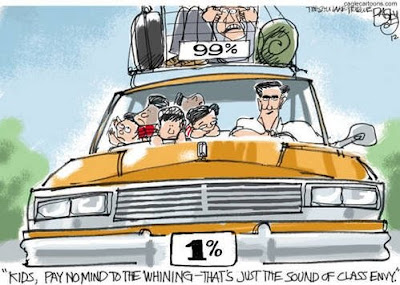 My vote would have nothing to do with his Mormon faith. That is a non-issue with me, although I doubt that all evangelicals in the US would concur. A majority of them will disregard any questions they may have about Romney's faith when they vote for him. For them politics trumps religion.

Therefore I pray that Obama will win reelection on November 6. Not because he has been such a great president so far, but because Romney is the wrong man for the most important job in the US and, indeed, the whole world.

This is a crucial election for the US, but also for the rest of the world. Foreigners will never be allowed to vote for the American president, thus all I can do now is endorse Obama. He is the best man for the job in my considered opinion. Many people in the world will no doubt agree with me.