President Obama on the role of religion in the public square 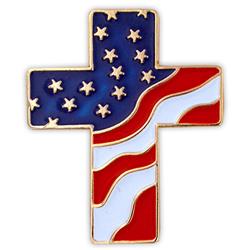 It is difficult, if not impossible, to describe how Christians perceive the role of faith in the public square. There are probably as many views as there are Christians. These run the entire gamut, from those who reject any such role at all to those who want to apply Old Testament laws literally in the modern state.

Rather than attempting to survey all these views, in this post I want to describe how one of the two leading politicians in the US today views this role. In the near future, I will look again at the issue of how Christians view the role of faith in the public square, but then from a wider perspective.

Today I have selected the candidate of the Democratic Party for the presidency, President Barack Obama. The approaching November elections makes the topic of the role of faith especially relevant.

Next time, in the interest of political fairness, I will discuss Governor Mitt Romney, the candidate of the Republican Party. However, I find Obama's comments on faith clearer than those of Romney, when they were both interviewed on this topic. I will refer to that interview further at that time.

Obama has spoken very clearly on this issue. What he says reflects his Christian faith. He is indeed a Christian, although a few Americans persist in their erroneous belief that he is a Muslim. Making such a fallacious claim is not enough, the onus is on his critics to prove that he is not a Christian either in his beliefs or his lifestyle. 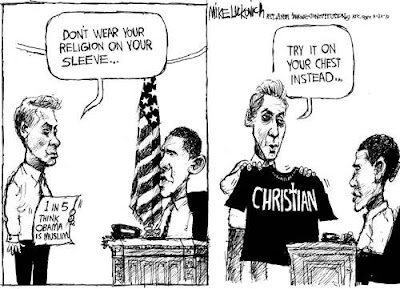 In a speech made about six years ago, Obama spoke eloquently about the connection between religion and politics. His words are still relevant today. They have not become stale, nor is there any indication that he has changed his perspective on this topic.

Obama's speech has been recognized by many as perhaps the most important speech on religion and politics in 40 years. Click here for the full text of his speech.

Obama talks about his faith very openly. He tells how, after neglecting faith for many years, he was able to affirm his Christian faith at Trinity United Church of Christ on 95th Street in Chicago. For him faith itself and the use of faith language are both very important. 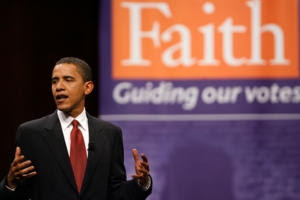 Thus, Obama asserts, "secularists are wrong when they ask believers to leave their religion at the door before entering into the public square."  Here the role of faith is the public square is clearly affirmed by him.

"Frederick Douglas, Abraham Lincoln, Williams Jennings Bryant, Dorothy Day, Martin Luther King - indeed, the majority of great reformers in American history - were not only motivated by faith, but repeatedly used religious language to argue for their cause," Obama notes. "So to say that men and women should not inject their 'personal morality' into public policy debates is a practical absurdity. Our law is by definition a codification of morality, much of it grounded in the Judeo-Christian tradition."

Obama also recognizes that the US is a pluralistic and democratic society. Thus there are limitations on how people can exercise their faith. He explains:

"Democracy demands that the religiously motivated translate their concerns into universal, rather than religion-specific, values. It requires that their proposals be subject to argument, and amenable to reason. I may be opposed to abortion for religious reasons, but if I seek to pass a law banning the practice, I cannot simply point to the teachings of my church or evoke God's will. I have to explain why abortion violates some principle that is accessible to people of all faiths, including those with no faith at all. 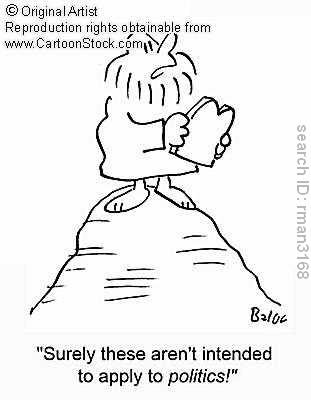 Not everyone will feel comfortable with Obama's language. Many will insist that people of faith need to speak more bluntly about the issues that concern them. Obama too is aware of this difficulty. He immediately adds:

"Now this is going to be difficult for some who believe in the inerrancy of the Bible, as many evangelicals do. But in a pluralistic democracy, we have no choice. Politics depends on our ability to persuade each other of common aims based on a common reality. It involves the compromise, the art of what's possible. At some fundamental level, religion does not allow for compromise. It's the art of the impossible. If God has spoken, then followers are expected to live up to God's edicts, regardless of the consequences. To base one's life on such uncompromising commitments may be sublime, but to base our policy making on such commitments would be a dangerous thing."

What Obama says here should serve as a warning to those who want to focus narrowly on certain issues, such as abortion, making such issues a litmus test for politics. But politics, as Obama states clearly, involves the ability to compromise. Too narrow a focus makes it impossible for people of faith to play a significant role in the public square.

Obama recognizes that "any reconciliation between faith and democratic pluralism requires some sense of proportion." This applies to both sides, he adds:

"Even those who claim the Bible's inerrancy make distinctions between Scriptural edicts, sensing that some passages - the Ten Commandments, say, or a belief in Christ's divinity - are central to Christian faith, while others are more culturally specific and may be modified to accommodate modern life."

"But a sense of proportion should also guide those who police the boundaries between church and state. Not every mention of God in public is a breach to the wall of separation - context matters. It is doubtful that children reciting the Pledge of Allegiance feel oppressed or brainwashed as a consequence of muttering the phrase 'under God.' I didn't." 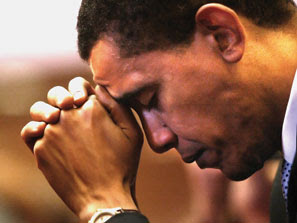 Obama then wraps up that part of his speech by making this observation:

"So we all have some work to do here. But I am hopeful that we can bridge the gaps that exist and overcome the prejudices each of us bring to this debate. And I have faith that millions of believing Americans want that to happen. No matter how religious they may or may not be, people are tired of seeing faith used as a tool of attack. They don't want faith used to belittle or to divide. They're tired of hearing folks deliver more screed than sermon. Because in the end, that's not how they think about faith in their own lives."

I found this speech very impressive. I may not agree with every one of his assertions, but he does explain very clearly and cogently how he sees the role of faith in that part of the public square we call politics.

You do not have to agree with his politics at all in order to commend him for his honesty and forthrightness. If only all politicians displayed those virtues, politics would change for the better. Most prefer not to breathe a word about their faith or its role in politics.

When I watch the presidential debates this month, I will remind myself of Obama's words and be thankful for his evident wisdom. I hope you will too.