The ninety-nine per cent and poverty 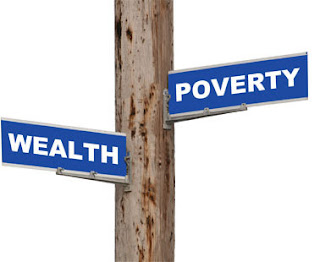 In many cities where the Occupy movement is protesting homeless people have joined the protest. They do that not because of the food and shelter that they receive, but because they more than the rest of the 99% are most aware of the enormous disparity in wealth between the super rich and the poor.
Many of the protesters are often comfortably well off, thus they can afford to skip school or work in order to protest. They can bring the amenities they need with them, including libraries.
The real poor in the world do not enjoy the luxury of protesting. If they do not work for a day, they and their families will starve.
I define poverty as an absence of choice. As long as you can decide whether to do A or B, you have a choice. Many people in the world live in absolute poverty: they have no choice whatsoever.
Absolute poverty refers to a set standard which is consistent over time and between countries. The World Bank defines absolute poverty as living on less than US $1.25 per day. This is determined not by the exchange rate with the US dollar, but by purchasing power parity--how much local currency is needed to buy the same things that this amount could buy in the US.
The following chart maps the percentage of people in various countries that live on only $1 per day.

Many regions of the world have insufficient food, but some have experienced setbacks and thus more people did not receive even $1 per day in both 1990 and 2001, as the next tables show.

There is also relative poverty, which views poverty as socially defined and dependent on the social context, hence relative poverty is a measure of income inequality. Usually, relative poverty is measured as the percentage of population with income less than some fixed proportion of median income.
Sometimes a specific figure is used: everyone whose income lies below that figure is considered poor. This figure is then the poverty line.
The next table illustrates the levels of poverty in the world, using different poverty lines. 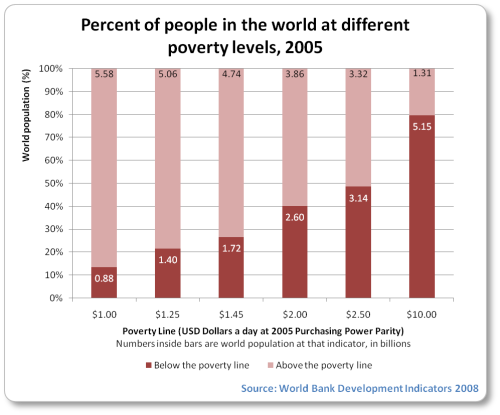 According to the US Census Bureau, in October 49.1 million Americans or 16% of the population live below the poverty line of about $24,000 per annum for a family or S5,500 for an individual.
This is a sizable increase from the previous month, but a revised and more accurate measure was used in October. Another indicator of the level of poverty is that 15% of Americans now receive food stamps.
From the previous tables it is readily apparent that much of the world's population would be happy to receive $2,000 per month. This shows how relative poverty can be.
This does not diminish in any way the terrible nature of poverty in the US. Millions are suffering every day, especially Hispanics and Afro-Americans. The US is a very expensive country in which to live. But it is criminal that so many Americans have to suffer in this way.
The cause of the Occupy movement is legitimate. The disparity between the rich and the poor in the US is higher than in most of the developed world. All countries have disparities.
One way to measure this disparity is the Gini coefficient, which is a measure of the inequality of a distribution, a value of 0 expressing total equality and a value of 1 maximal inequality.  The Gini coefficient does have some weaknesses, but it is nevertheless useful and offers a simple comparison between countries, as the following chart illustrates.

In particular, the growing disparity between the 1% and the rest of the population, as well as the inordinate influence of that 1%, is what motivates the Occupy movement. The middle class is shrinking in the US. Canada and most European nations are more egalitarian than the US, with Sweden the most egalitarian of all.
But the 99% are not equal either. There is also a wide disparity both within the middle class and between them and the steadily growing under class that lives in poverty. All have made a common cause in the protests that have now spread over much of the world, but the gap between them is enormous.
It is thus simplistic to lump all the 99% together. They all suffer at the hands of the 1%, but in their suffering they are not equal.
This inequality is even greater when the 99% in North America and Europe are compared with those in Africa and Asia. The Occupy movement has not yet reached the shores of those continents, at least not in the form of massive protests as in the richer countries.
The inequality is greater there than anywhere else in the world, but few Africans or Asians can afford the luxury of joining the protests. Increasingly voices are being raised of prominent individuals who signal the inequality of their societies, but there are not yet any massive protests.
In Africa, the exceptions so far have been Tunisia, Egypt and Libya, where dictators have been removed, but these were primarily political movements to rid their countries of tyrants. Economic inequality has played a lesser role. In the future, as more tyrants are removed, it will become more important.
The Arab Spring inspired the Occupy movement, but the latter has so far not led to any revolutions, even though the goals are revolutionary. It may yet become a political movement that will change the world as we know it today.
I hope that the powers that be will not evict the protesters but allow them to herald a new age. In many cities evictions have already started or are threatened. In the northern hemisphere, there is also the threat of winter.
The Occupy movement will not necessarily end because of these threats. The cause is too important to let that happen. It is spreading and will continue to spread, although it may soon take other forms. 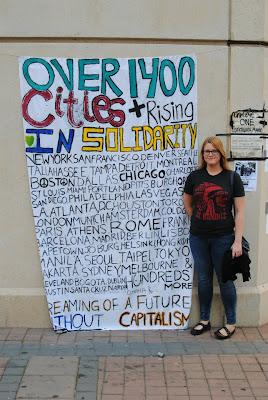 The protests in North America, Europe, and elsewhere may yet inspire more Africans and Asians to join them. These continents certainly need it. Their people are among the poorest in the world.
Sub-Saharan Africa especially is ripe for revolutions. Many people are clamoring for change, but until the protests achieve a sufficient critical mass, little will happen. The tyrants who rule these countries remain firmly in control. Yet there too the winds of change are beginning to blow.
Blow hard winds! 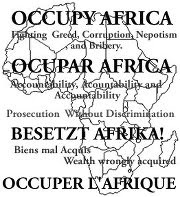