Elder abuse is very common, but it is under reported. Just like sexual harassment, which I dealt with last week, it needs to stop. This is why I want to raise this issue in my blog today.
One of the more commonly accepted definitions of elder abuse is "a single, or repeated act, or lack of appropriate action, occurring within any relationship where there is an expectation of trust, which causes harm or distress to an older person. This definition was adopted by the World Health Organization.
Anyone who is 65 or older can become a victim of elder abuse. Since I have already passed that threshold, this topic is of immediate concern to me.
In addition, my mother, aged 91, is in a nursing home, where she receives good care, in spite of her complaints that the staff do not come quickly enough when she calls for them.
But some nursing homes, unfortunately, do practice abuse, as many reports on elder abuse indicate. For example, see http://www.gao.gov/new.items/d02312.pdf in the US. And, similarly, in Canada, see http://elder-abuse-spotlight.blogspot.com/2011/11/nursing-home-residents-abused-canada.html. It also occurs in many other countries. 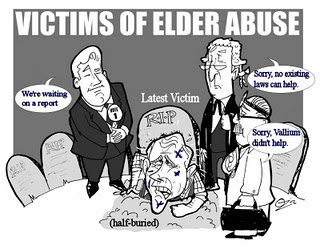 Elder abuse should concern everyone, since abuse happens in every society, even those where the elderly are valued more than in Western ones.
In my research for this post I read about a grandmother in India whose family put her out with the garbage. It seems that the new demands made on families in India made it difficult for her family to continue to support her, in spite of the traditional respect accorded the elderly in that society.
Education is an important step in dealing with elder abuse. Thus through this post I want to add my small voice to those who want to stop it.
The WHO definition focuses on harm that occurs where there is an "expectation of trust" of the older person toward their abuser. Thus, it includes any harm done by people the older person knows or with whom they have a relationship, such as a spouse, partner or family member, a friend or neighbor, or people that the older person relies on for services.
The following graph illustrates who the most likely perpetrators are.

There are many different types of elder abuse:

Although slightly dated, the next chart uses somewhat different categories to map out the incidence of domestic abuse. 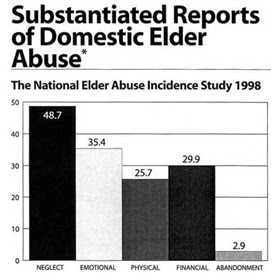 It is widely acknowledged that many non-professional caregivers--spouses, adult children, other relatives and friends--find taking care of an elderly person to be satisfying and enriching. But the responsibilities and demands of elder caregiving, which escalate as the elder’s condition deteriorates, can also be extremely stressful. The stress of elder care can lead to mental and physical health problems that make caregivers burned out, impatient, and unable to keep from lashing out against elders in their care.
Among caregivers, significant risk factors for elder abuse are an inability to cope with stress, depression, a lack of support from other potential caregivers, the caregiver’s perception that taking care of the elder is burdensome and without psychological reward, or even substance abuse.
Even caregivers in institutional settings can experience stress at levels that lead to elder abuse. Nursing home staff may be prone to elder abuse if they lack training, have too many responsibilities, are unsuited to caregiving, or work under poor conditions.
In the US, the 500,000 to 1,000,000 reports of elder abuse recorded by authorities every year (the vast majority of which are proven to be true) are only the tip of the iceberg. According to data from different states, for every case of elder abuse reported, another 12 or 13 are not.
Accordingly there’s a great need for people to report suspected abuse. This is an important step in stopping  elder abuse. All of us can help reduce the incidence of elder abuse.
We can begin preventing elder abuse by listening to seniors and their caregivers, intervening when elder is suspected, and educating others about how to recognize and report elder abuse. 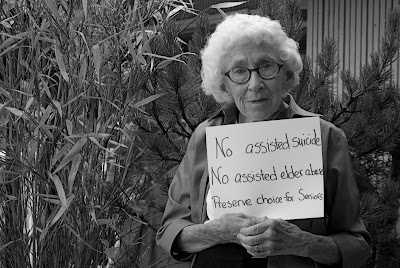 One type of elder abuse is easily overlooked but is the most severe of all: doctor assisted suicide. While its proponents argue that elderly and other incapacitated or severely ill people should be allowed to end their own lives, the danger that assisted suicide can be used by caregivers and others to remove the burden posed the elderly or make it possible for those who want to gain their inheritance sooner is only too real.
Euthanasia is a huge topic that I hope to tackle soon, but I did want to mention it now in the context of elder abuse. In a truly caring society, we must be cautious in not permitting some of the weakest members to be potentially victimized in this way.
I will conclude with a poem penned by an old woman in Scotland who is known only as "Anonymous."
What do you see, people, what do you see?
What are you thinking, when you look at me?
A crabby old woman, not very wise.
Uncertain of habit, with far-away eyes,
Who dribbles her food and makes no reply.
When you say in a loud voice, "I do wish you'd try!"
Who seems not to notice the things that you do.
And forever is losing a stocking or shoe.
Who, unresisting or not, lets you do as you will.
With bathing and feeding, the long day to fill.
Is that what you're thinking, is that what you see?
Then open your eyes--you're not looking at me.
I'll tell you who I am as I sit here so still!
As I rise at your bidding, as I eat at your will.
I'm a small child of 10 with a father and mother,
Brothers and sisters, who loved one another.
A young girl of 16 with wings on her feet,
dreaming that soon now a lover she'll meet.
A bride soon at 20 -- my heart gives a leap,
Remembering the vows that I promised to keep.
At 25 now I have young of my own
Who need me to build a secure, happy home.
A woman of 30, my young now grow fast,
Bound to each other with ties that should last.
At 40, my young sons have grown and are gone,
But my man's beside me to see I don't mourn.
At 50, once more babies play around my knee,
Again we know children, my loved one and me.
Dark days are upon me, my husband is dead,
I look at the future, I shudder with dread.
For my young are all rearing young of their own.
And I think of the years and the love that I've known.
I'm an old woman now and nature is cruel,
'Tis her jest to make old age look like a fool.
The body is crumbled, grace and vigor depart.
There is now a stone where I once had a heart.
But inside this old carcass a young girl still dwells,
And now and again my battered heart swells.
I remember the joy, I remember the pain,
And I'm loving and living life over again.
I think of the years--all too few, gone too fast--
And accept the stark fact that nothing can last.
So open your eyes, people, open and see,
Not a crabby old woman--LOOK CLOSER, SEE ME!
These are the people who need our care. They are the reason why we must help stop elder abuse. They need a helping hand: our hand. 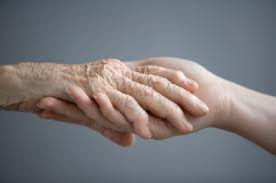