Should Christans vote for Trump? Part One: Jesus, Trump, and Humility

I want to begin a new series of posts asking the question: Should Christiansvote for Donald Trump? The idea came out of a sermon that I recently delivered. There I did not make the comparison directly, but it was implied. Here I want to make it explicitly. I am a Canadian and thus cannot vote in the US, but I am troubled that so many American fellow believers support Trump. My contention is that one cannot be a Christian and at the same time support a man whose behavior is so contrary to the Christian faith. 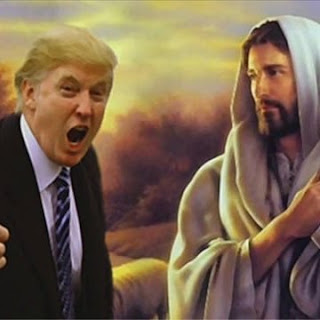 Jesus or Trump? These two men couldn’t be more different. They are polar opposites from each other. How they can have so many worshipers in common is beyond belief. According to many  polls, three-fourths of Evangelicals (who belong to many Christian denominations) want Donald Trump to become the next president. They love him!

However, Trump is someone who has been divorced several times, mocks the disabled, denigrates women, engages in juvenile name-calling, disparages Mexicans and Muslims, encourages Russia to hack the emails of Americans, and -- most notably -- has devoted his life to the accumulation of money. How can so many Christians vote for him?

As the election date draws closer, I want to do what I can to persuade them otherwise. I also want to encourage those who despair when they witness his egregious behavior. Today I want to contrast Trump and Jesus. That is not a fair comparison, of course, since Jesus is incomparably greater than Trump, no matter what the latter thinks of himself.

I want to contrast them in terms of humility. In future posts, I want to raise other areas where they differ greatly and thus force Christians, especially Evangelicals, to re-examine their support for Trump.

One is the epitome of humility while the other is an arrogant and narcissistic fool. Unfortunately, many of Trumps supporters overlook his failings because they feel he is one of them. They identify with him. But how can they do that when the difference between them is like day and night? 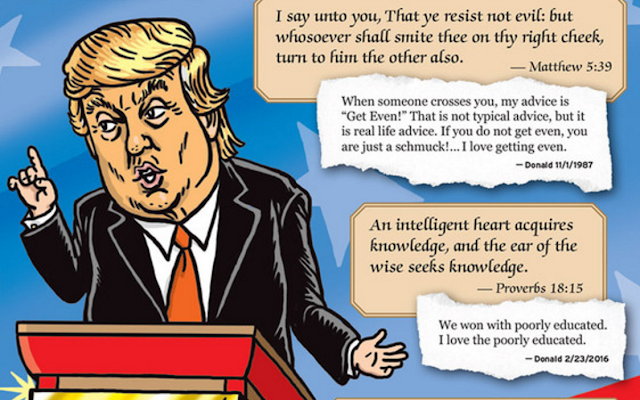 The gospel writer Luke, in chapter 14,  tells the story of Jesus attending a dinner at the house of a Jewish leader. Jesus noticed how each of the guests had picked the best places at the dinner table. They thought they were the most important and therefore they deserved the place of honor.

Jesus reprimanded them for this attitude. He may have been thinking of Proverbs 25:6-7: "Do not put yourself forward in the king's presence or stand in the place of the great; for it is better to be told, 'Come up here,' than to be put lower in the presence of a noble."

Jesus condemned the pride and arrogance of the Jewish leaders, as is clear from the next verses where he says those who had sought the most important place would be told to move to a lower place much further from the host. Imagine what the other guests must have thought of Jesus' remark. They must have been highly offended.

Jesus chose this dinner as the place to teach a lesson to these stuffed shirts. I can think of many people today who would be equally offended. Trump, in particular, would probably have said to Jesus, “You are fired!” There are more like him, however, in every walk of life. However, they do not make the sort of leaders people should try to emulate.

Jesus did not always observe the norms of society. He broke the rules, if necessary, so that he could usher in his kingdom. That kingdom is a new creation, one that is very different from the kingdom of the world that we see all around us. So much so that his kingdom has been called the up-side-down kingdom.

In that kingdom there is no place for those who are proud and arrogant. The kingdom of Jesus is reserved for those who are truly humble. Humility is the chief entrance requirement. Without this as passport one cannot enter. 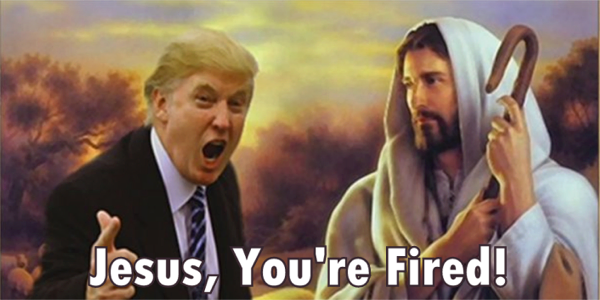 The Jewish leaders did not understand that. Nor does Trump. He wants to set up his own kingdom. His is a kingdom of this world. It has totally different values. Trump claims to be a Christian, but his arrogant behavior indicates he is from from the kingdom of Jesus.

The apocryphal book of Sirach describes pride and its consequences very well. Listen to these words from Sirach 10:12-18, which is there for our edification:

The beginning of human pride is to forsake the Lord; the heart has withdrawn from its Maker. For the beginning of pride is sin, and the one who clings to it pours out abominations. Therefore the Lord brings upon them unheard-of calamities, and destroys them completely. The Lord overthrows the thrones of rulers, and enthrones the lowly in their place. The Lord plucks up the roots of the nations, and plants the humble in their place. The Lord lays waste the lands of the nations, and destroys them to the foundations of the earth. He removes some of them and destroys them, and erases the memory of them from the earth. Pride was not created for human beings, or violent anger for those born of women.

What is humility? The dictionary is not helpful. There it is defined as “the quality or state of not thinking you are better than other people.” The Greek word tapeinophrosýnē is used several times in the New Testament  where it often interpreted as “having a modest opinion of oneself.” But that is not correct either.

Humility is not a denial of our talents and gifts but is our recognition of them. It expresses our desire to live up to our worth and do something even greater. It is in the service to others that the greatest form of humility is demonstrated. In the Old Testament, Moses especially is cited for his humility. See Numbers 12: "And Moses was exceedingly humble, more than any man on the face of the earth."

True humility involves submitting oneself totally to God. It means recognizing the virtues and talents that others possess, particularly those that surpass one's own, and giving due honor and obedience to them.

It also means recognizing the limits of one's talents, ability, or authority; and, therefore, not reaching for what is beyond one's grasp. In the up-side-down kingdom that Jesus ushered in, humility does not mean self-effacement, but putting God first.

Jesus is presented as the prime example of humility in Philippians 2:1-11:


If you have any encouragement from being united with Christ, if any comfort from his love, if any fellowship with the Spirit, if any tenderness and compassion, then make my joy complete by being like-minded, having the same love, being one in spirit and purpose. Do nothing out of selfish ambition or vain conceit, but in humility consider others better than yourselves. Each of you should look not only to your own interests, but also to the interests of others. Your attitude should be the same as that of Christ Jesus: 6 Who, being in very nature God, did not consider equality with God something to be grasped, but made himself nothing, taking the very nature of a servant, being made in human likeness. And being found in appearance as a man, he humbled himself and became obedient to death-- even death on a cross! Therefore God exalted him to the highest place and gave him the name that is above every name, that at the name of Jesus every knee should bow, in heaven and on earth and under the earth, and every tongue confess that Jesus Christ is Lord, to the glory of God the Father. 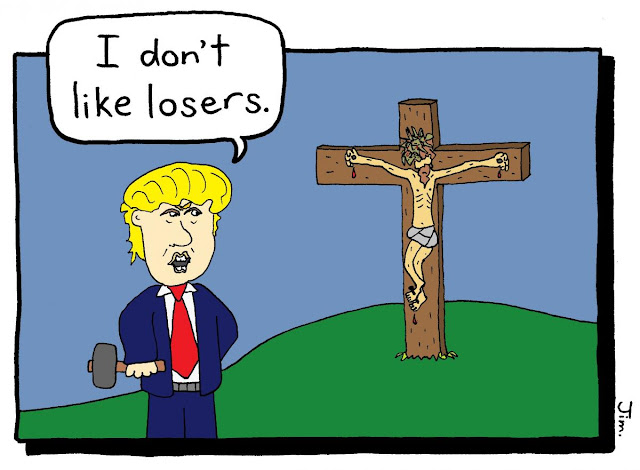 Such submission, as Islam recognizes as well in its name, is the essence of humility. Those who are truly humble, submit themselves to God and they so so by serving others. I just can't see Trump doing that!

Mother Theresa, whom many people would acknowledge as a truly humble person and even a saint, has described several ways that people can practice humility:

To speak as little as possible of one's self. To mind one's own business. Not to want to manage other people's affairs. To avoid curiosity. To accept contradictions and correction cheerfully. To pass over the mistakes of others. To accept insults and injuries. To accept being slighted, forgotten and disliked. To be kind and gentle even under provocation. Never to stand on one's dignity. To choose always the hardest.

On this scale, Trump would fail miserably. He would fail even more miserably when compared to Jesus. Trump's character, as displayed in his speeches and lifestyle, contradicts the humility that Jesus displayed. personally and that he demands of his followers. 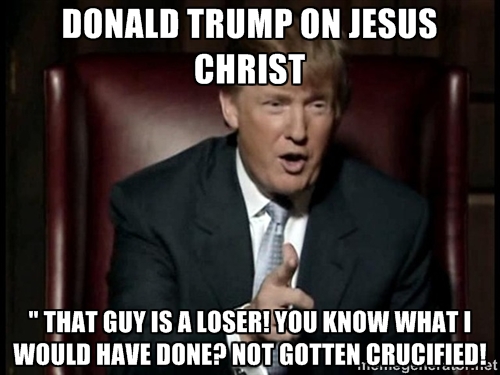 My question is: how can anyone support a person whose arrogance has become proverbial? Trump's behavior is the antithesis of that of Jesus. How can people who consider themselves Christians follow Trump rather than Jesus? One cannot serve both of them!

There are many good people of faith in the US who will band together in November to defeat Trump and his divisive agenda. The list is long. It includes both Christians and non-Christians. There are also many humanists, atheists, and agnostics, not to forget the one-fourth of those who label themselves as Evangelicals.

Even some of the last named group, who together probably consider themselves among the most ardent followers of Jesus, may yet desert Trump at the last minute. Would that everyone would desert him! That is my hope and fervent prayer!

Please join me in spreading this message. Christians (and indeed all people of faith) should not vote for Trump. He does not deserve to become the next American president.