This is the second of a series on why Christians (and other people of faith) should not vote for Donald Trump. 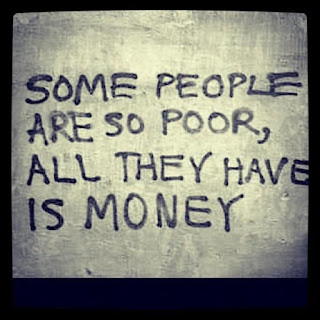 In the first part of this series I contrasted the humility of Jesus with that of Trump. Who would you vote for, I asked: Jesus or Trump? I stated there that these two men couldn’t be more different; they are polar opposites from each other, and thus I wondered how they can have so many worshipers in common; that is beyond belief.

One is the epitome of humility while the other is an arrogant and narcissistic fool. Unfortunately, many of Trumps supporters overlook his failings because they feel he is one of them. They identify with him. But how can they do that when the difference between them is like day and night?

But there many more areas where these two men differ. For that, I want to return to Luke 14, where the story is told of a dinner at the house of a Pharisee that Jesus attended. In the first part of the story, he had criticized the Jewish leaders for their arrogance in choosing the best seats at the dinner table.

But Jesus wasn't finished yet with his dinner-time lesson. He also criticized his host who had invited him and the other Jewish leaders for inviting only their friends, relatives, and other rich people to their dinners. He told them off for not inviting the poor and the disabled, who need a dinner. Besides, they can't return the favor.

What he told them is the gospel: it is good news for the poor. The poor are the ones who ought to be invited. They are the ones who deserve an invitation and not those rich, arrogant fools who think they are better than anyone else. “Blessed are the poor,” Jesus says in the Sermon on the Mount.

Is this the Jesus we can expect when Trump is president?

Psalm 122: 9 contrasts two very different attitudes to the poor. On the one hand, there are those of whom the psalmist says, "They have distributed freely, they have given to the poor; their righteousness endures forever; their horn is exalted in honor." But of the wicked, the psalmist says, "The wicked see it and are angry; they gnash their teeth and melt away; the desire of the wicked comes to nothing."

The poor were excluded from this dinner. The disabled had also been excluded by the Jewish leaders. However, in Jesus' kingdom, as I have explained in a previous post, the poor and those who are disabled will receive special attention. The kingdom of Jesus is an up-side-down kingdom where different values are observed. There is no room in that kingdom for those who do not welcome the poor and the disabled. Jesus here is not only giving a lesson on humility but also on hospitality.

Right after these two lessons in Luke 14, Jesus taught a parable about a great banquet to which many people have been invited. However, some people gave excuses because they did not want to attend. Jesus himself is the one who has issued the invitation to this great eschatological banquet. Many have been invited, but a special invitation is reserved for the poor and disabled.

Only those who are arrogant and unconcerned about the poor and disabled are excluded -- or better, they have excluded themselves. They claim they are too busy to come. That sounds a lot like Donald Trump, doesn't it? What would his excuse be? I am too busy running for the presidency? Anyway, Trump is interested only in money! He  doesn't have time for God.

I am telling this biblical story because this post is intended especially for those in the US who claim to be followers of Jesus but are intent on voting for Trump. To them, I say this: You must choose one or the other of these two; you cannot serve both at the same time. 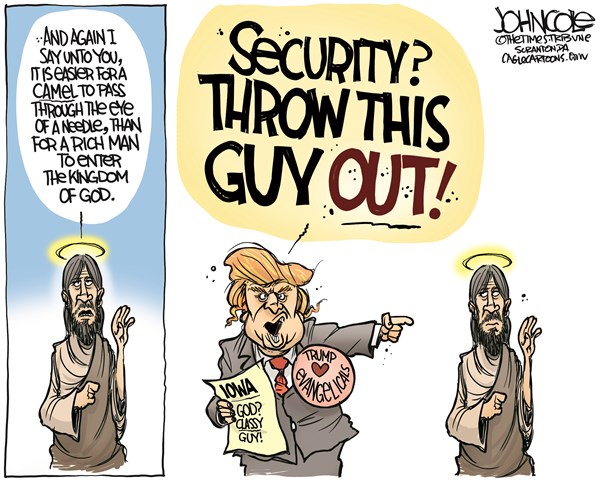 On the issue of the poor, Trump's record is poor. He has affirmed his support for the poor on many occasions: He has stated: "In fact, actually, the people I resonate best with are poor people and people that are really blue collar. That seems to be a base that I have. I have a tremendous base. Those are the people that like me. …I think the people that like me the least are the rich people."

Indeed, the poor do love Trump, but he doesn't reciprocate. Incredibly, he has told a newspaper that he thinks poor people, the people want to vote for him, are morons, His policies are intended to help the rich, not the middle class, much less the poor, in spite of what he says about loving the poor.


Trump has been called the wealthy poor boy. He is fabulously wealthy; He owns homes in Manhattan; Palm Beach; upstate New York; Charlottesville, Virginia; and Rancho Palos Verdes, California; as well as hotels, apartment buildings and resorts all over the planet. He even has his own fleet of planes, all bearing the Trump label. But he is not an advocate for the poor.

Yet he is poor: he doesn't realize his need for God. He attributes his wealth to the American work ethic. He regards himself as self-made man (with a little help from his daddy). Thus he is critical of welfare and extols the value of work:

That's what I find so morally offensive about welfare dependency: it robs people of the chance to improve. Work gives every day a sense of purpose. A job well done provides a sense of pride and accomplishment. I love to work. In fact, I like working so much that I seldom take vacations. Because I work so hard, I've been privileged to create jobs for tens of thousands of people. And on my hit show "The Apprentice", I get to work with people from all works of life. I'm known for my famous line, "You're fired!" But the truth is, I don't like firing people. Sometimes you have to do it, but it's never fun or easy. One of my favorite parts of business is seeing how work transforms people into better, more confident, more competent individuals. It's inspiring and beautiful to watch. 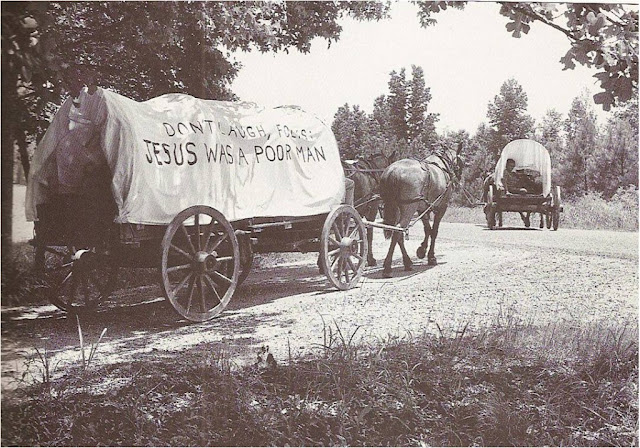 Both Trump and Hilary Clinton have this in common: both promise to help Americans find jobs, but neither has said much about helping people while they are not working. The US has the deepest poverty of any developed nation, but you would not know it by listening to them. It’s not at all unusual for people running for president not to talk about poverty, but that does not excuse Trump from not siding openly with the poor. Sadly, Clinton is no better.

In Hillbilly Elegy: A Memoir of a Family and a Culture in Crisis, J.D. Vance, a Yale Law School graduate who grew up in the poverty and chaos of an Appalachian clan, gives a voice and presence in the public square to the poor of America. He helps to explain why in the poorest parts of  West Virginia you can see nothing but TRUMP signs. Vance explains that these people -- his people -- are struggling, but laments the fact that not a single political candidate speaks to those struggles. Not even Trump.

Trump uses the poor just as he does other groups. They support him, but that support is not deserved if measured by what he has done for them: Zero! Nada! In fact, he has consistently made their situation worse and continues to do so.

Trump has filed for bankruptcy four times, which makes him the top filer in recent decades. All of them involved hotels and casinos and all were Chapter 11 restructurings, which lets a company stay in business while shedding debt it owes to banks, employees, and suppliers. He makes no apologies for having much of his debt wiped ou. "These lenders aren't babies," he says,"These are total killers,"  He should look at himself in the mirror, then he will see a morally-bankrupt person who does not deserve to become president.

His bankruptcy is also illustrated by his refusal to pay suppliers and workers on numerous occasions. That is how he treats the poor who work for him. According to Forbes, his trade policies threaten to make the poor even poorer. Indeed, in that event, all Americans will become poorer. Trump doesn't care, as long as he can continue to make money.

Who has demonstrated more concern for the poor: Jesus or Trump? What a question! When Jesus began his ministry, he told his listeners that he has been appointed to preach good news to the poor. He demonstrated his love for them by sacrificing himself on the cross.

In contrast, Trump is a narcissistic egoist who has never demonstrated any genuine concern for the poor, except as part of a staged political ploy. The man is a hypocrite! Some people have even compared him with the Anti-Christ. That might be a bit unfair, but he is an evil man who no person of faith should support.

Whom will you choose? You cannot serve both of them at the same time. You must either follow Jesus and reject Trump at the ballot box, or you may vote for Trump, but then you will be denying Jesus. That is how stark the choice is. You cannot serve both God and money. Unfortunately, a lot of Christians think they can, but they are wrong.

If you truly love God, you must also love the poor. That is what God commands all believers. Therefore, there is only one choice you can make on Election Day. To do anything else would be blasphemous. Don't join Trump in his blasphemy and evil deeds!