Providing a refuge for 50 million plus displaced people 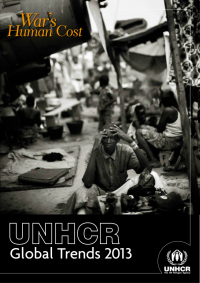 Contained in its 52 pages are lots of figures about the plight of refugees in the world. The 2013 level of displacement was the highest on record since comprehensive statistics on forced displacement were collected.

Displacement data covers three groups: refugees, asylum-seekers, and the internally displaced. Among them, the number of refugees amounted to 16.7 million people worldwide, 11.7 million of whom are under UNHCR’s care and the remainder are registered with its sister organization, the United Nations Relief and Works Agency for Palestine. 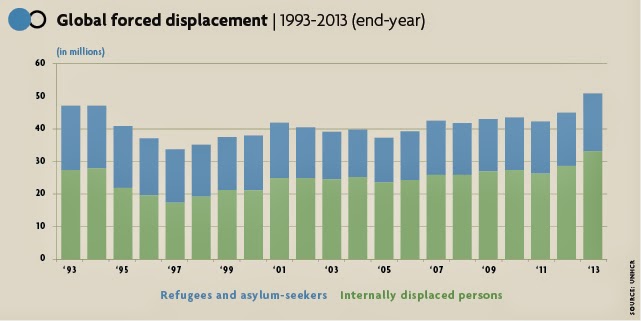 This report, which is based on data compiled by governments and non-governmental partner organizations, and from the organization's own records, shows that 51.2 million people were forcibly displaced by the end of 2013, which was fully 6 million more than the 45.2 million reported the previous year.


This massive increase was driven mainly by the war in Syria, which at the end of last year forced 2.5 million people into becoming refugees, and produced 6.5 million internally displaced. A major new displacement was also seen in Africa, notably in Central African Republic and South Sudan.

The report notes that 3.5 million refugees, or one-third of the global total,, resided in countries covered by UNHCR’s Asia and Pacific region. Of these, more than 2.4 million were Afghans (69 per cent) who are now living in Pakistan and Iran. 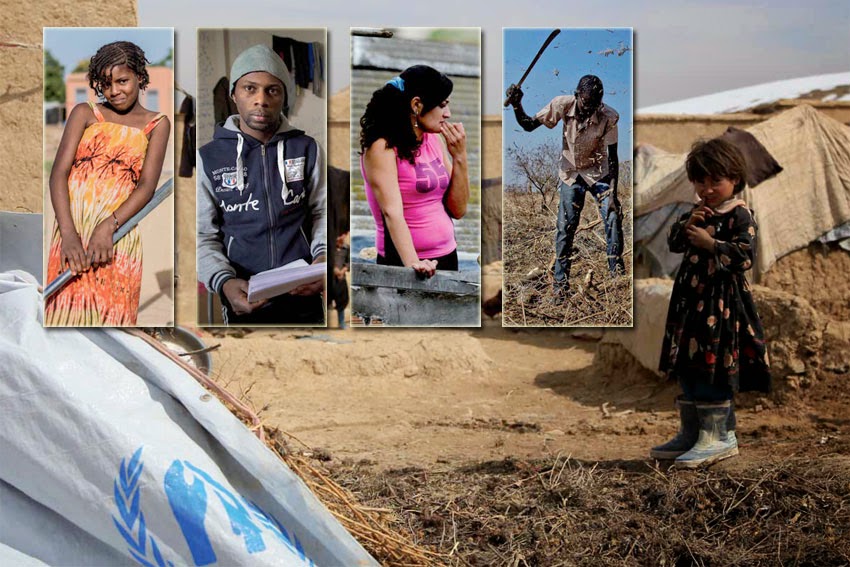 Behind these and the other figures, however, are the untold stories of men, women, and children about how they fled their homes, whether temporarily or permanently, and what their hopes are for the future. Although the report does picture a handful out of these many millions, it does not name them.

Figures can only measure the number of people affected, they do not describe the agony they experience on a daily basis. Nevertheless, this report does permit the world to see how extensive the problem of displaced people is. Also, governments are now no longer able to hide how little they are doing to alleviate the problem.

In addition to refugees, 2013 saw 1.1 million people submitting applications for asylum, the majority of these in developed countries. Germany in 2013 became the largest single recipient of new asylum claims. A record 25,300 asylum applications were from children who were separated from or unaccompanied by parents. Syrians lodged 64,300 claims, more than any other nationality, followed by asylum seekers from the Democratic Republic of the Congo (60,400) and Myanmar (57,400). 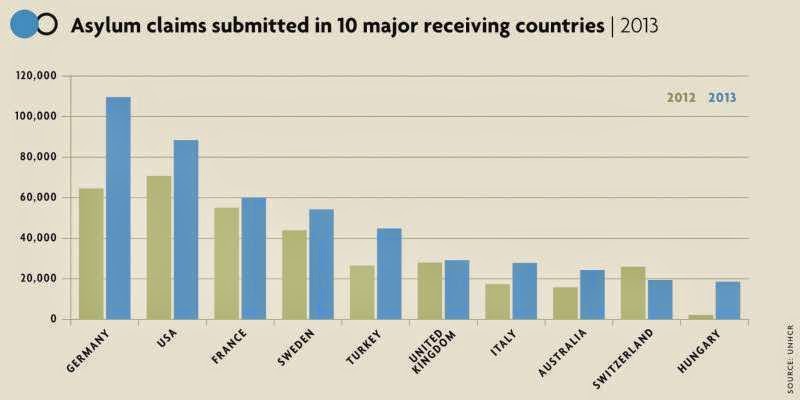 People who were forced to flee their homes but stayed within their own country totaled a record 33.3 million, the largest increase of any group in the Global Trends report. For UNHCR and other humanitarian actors, helping these people represents a special challenge as many are in conflict zones, where getting to aid to them is difficult and where they lack the international protection norms afforded to refugees.

Renewed fighting in the Democratic Republic of the Congo (DRC), the Central African Republic, Mali and the unstable security situation in the north east of Nigeria, all caused enormous numbers of civilians to leave their homes and seek refuge elsewhere within their own country.

At the same time, some 68,400 refugees were able to return to their homes in DRC last year, according to these statistics. They were among the 414,600 refugees who went back to their homelands, the goal of most refugees and the UN refugee agency. When voluntary return home is not possible, UNHCR seeks long-term solutions for refugees through local integration or resettlement in third countries. During the year, UNHCR submitted 93,200 refugees for resettlement, and some 71,600 departed with UNHCR’s assistance.

The latest conflict in Iraq, where Sunni extremist fighters are advancing southward toward Baghdad, does figure in the report since it covers 2013. But more than 1 million people have been displaced by fighting in Iraq so far this year -- half of them in the past couple of weeks. That's about one in 30 people nationwide who have fled their homes. 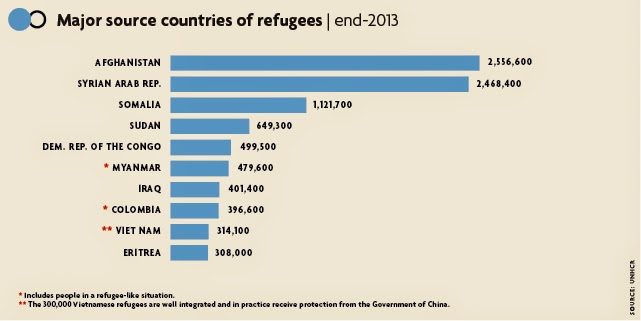 The worldwide population of stateless people is not included in the figure of 51.2 million forcibly displaced people, since being stateless does not necessarily correlate to being displaced. Statelessness remains hard to quantify because of the inherent difficulties governments and the UNHCR have in recording people who lack citizenship and related documentation. In addition, some countries do not gather data on populations they do not consider as their citizens.

For 2013, UNHCR reported a figure of almost 3.5 million stateless people including 750,000 in West Africa, which is about a third of the number of people in the world estimated to be stateless.

By the end of 2013, Pakistan has continued to host the largest number of refugees in the world, 1.6 million, nearly all of whom were from Afghanistan. At the same time, voluntary repatriation of Afghan refugees from Pakistan to Afghanistan has also been the largest in the world, with 3.8 million having been assisted by UNHCR to return home since 2002.

Developing countries, including many in Africa, now host 86 per cent of the worlds refugees, which is up from 70 per cent 10 years ago. Sub-Saharan Africa hosts about one-quarter of all refugees in the world. Three African countries were among the top 10 refugee-hosting countries in the world: Kenya (534,900 refugees), Chad (434,000) and Ethiopia (433,900). 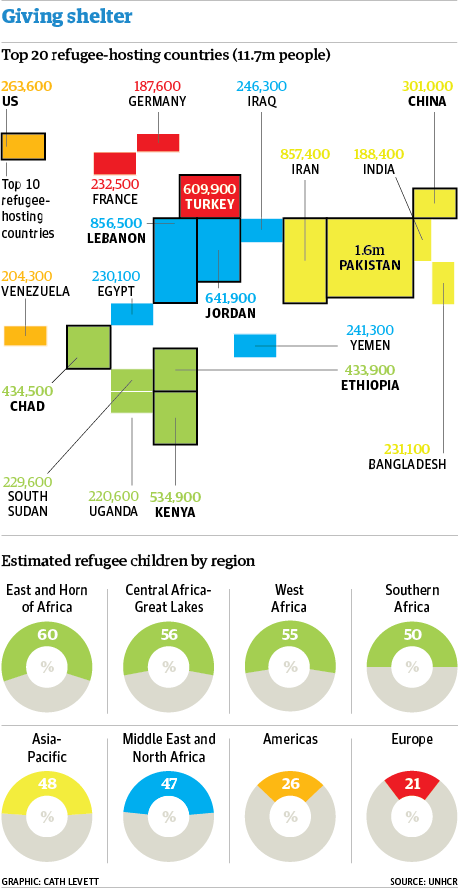 Canada does not make the list of refugee-hosting countries. Historically, Canada has been one of the most generous countries in the world in accepting refugees for permanent residency and citizenship. But this is no longer the case.

When it comes to actual resettlement, Canada admitted only 12,000 in total from all over the world in 2013. Opposition parties in Canada and groups like Amnesty International as well as the Canadian Council for Refugees have complained that Canada is not doing enough, especially for Syrian refugees.

In the civil war in Syria more than one million of the refugees are children. How tragic! Something needs to be done urgently to help these young refugees. 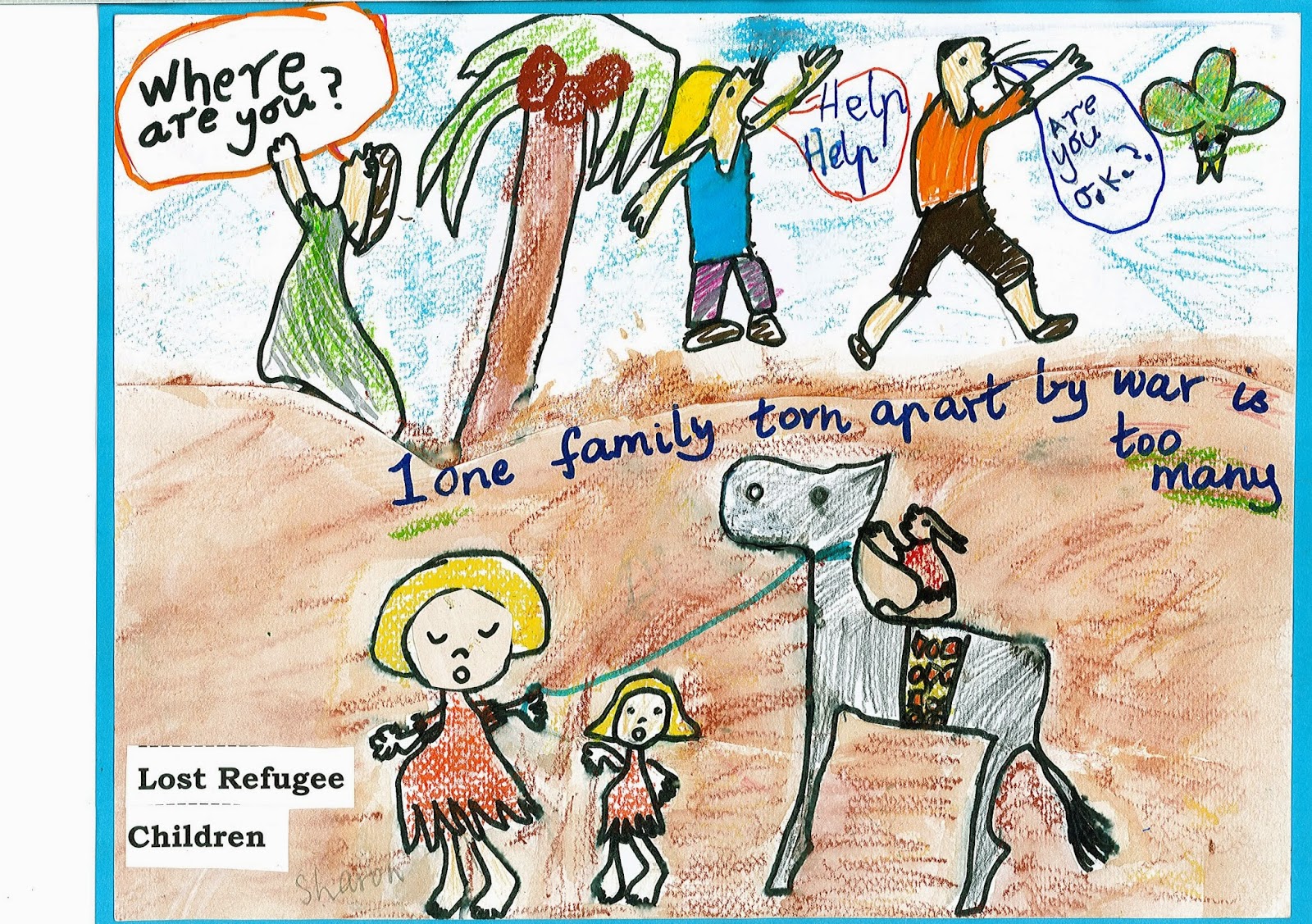 Canada's Minister of Citizenship and Immigration, Chris Alexander, has claimed that Canada is "at the top of the list"  in terms of welcoming Syrian refugees globally, although, thus far, the Canadian government has set a target of only 1,300 refugees, and is relying on private individuals to sponsor 1,100 of those. But the number of Syrian refugees who were actually admitted in 2013 was only a handful.

When pressed on the precise figure, the government has refused to answer. A reliable source uses the figure of only 10, which is not only shameful but it is also heartless and cruel. What sort of a government can do this to people?

In addition to government-assisted or privately sponsored refugees, there are thousands of individuals who come to Canada each year seeking asylum. While asylum claims in the EU and Australia have ballooned, in Canada these types of refugee claims actually dropped.

According to government data, the total number of asylum seekers who entered Canada in 2013 dropped almost 50 per cent, from 2012, to only 10,000. The government attributes this to their pro-active measures to tackle the problem of fraudulent claims, but refugee advocates continue to call these measures unfair.

Regardless of the government's measures to deal with what they regard as fraudulent asylum claims, Canada should be much more generous when it comes to refugees, in particular Syrians. It is to Canad's shame that one of the richest countries in the world is unwilling to do more to aid their plight. But so many other countries should also do much more.  The UNHCR report proves the necessity of this.

The prayer of the (Roman Catholic) Archdiocese of Toronto on World Refugee Day is surely appropriate. 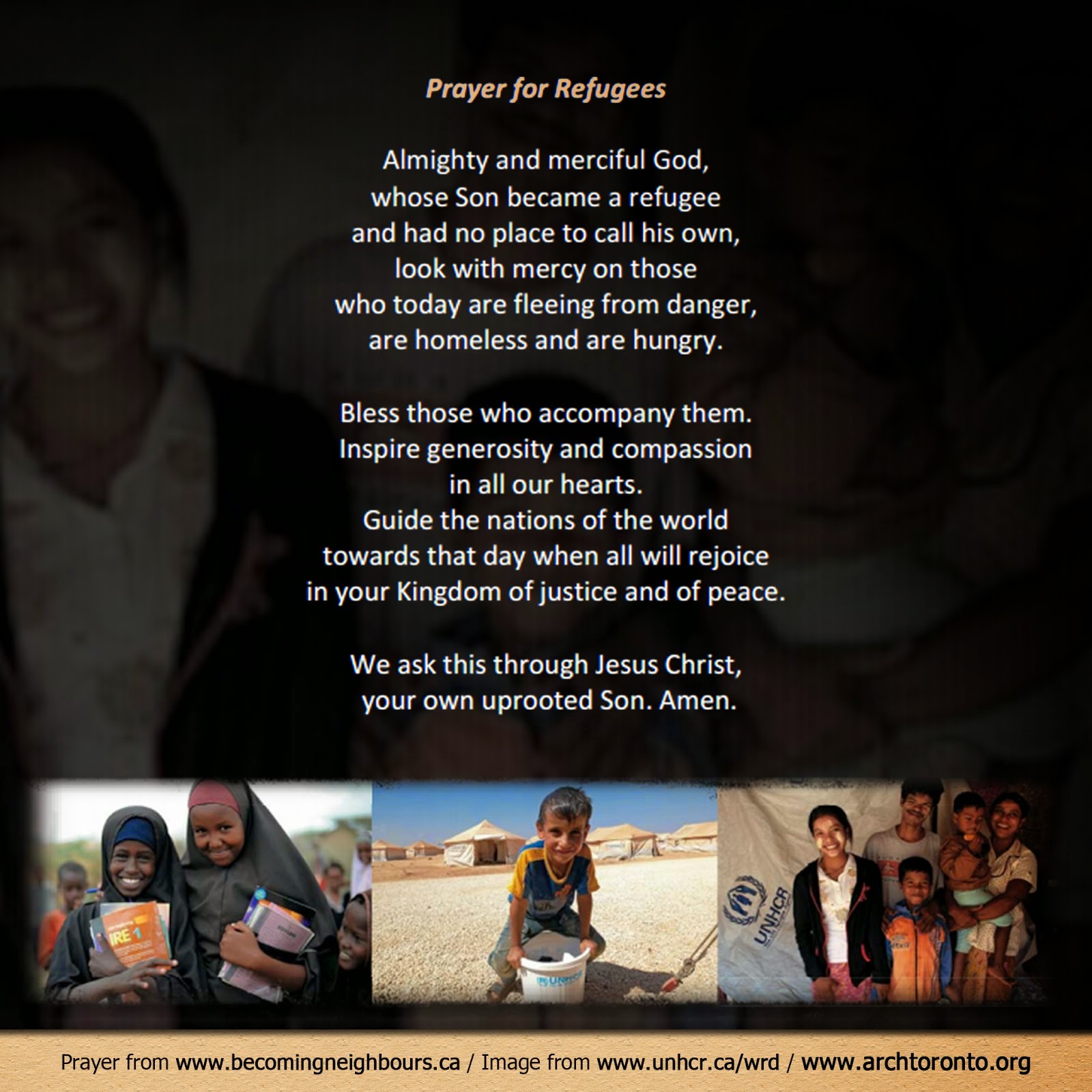